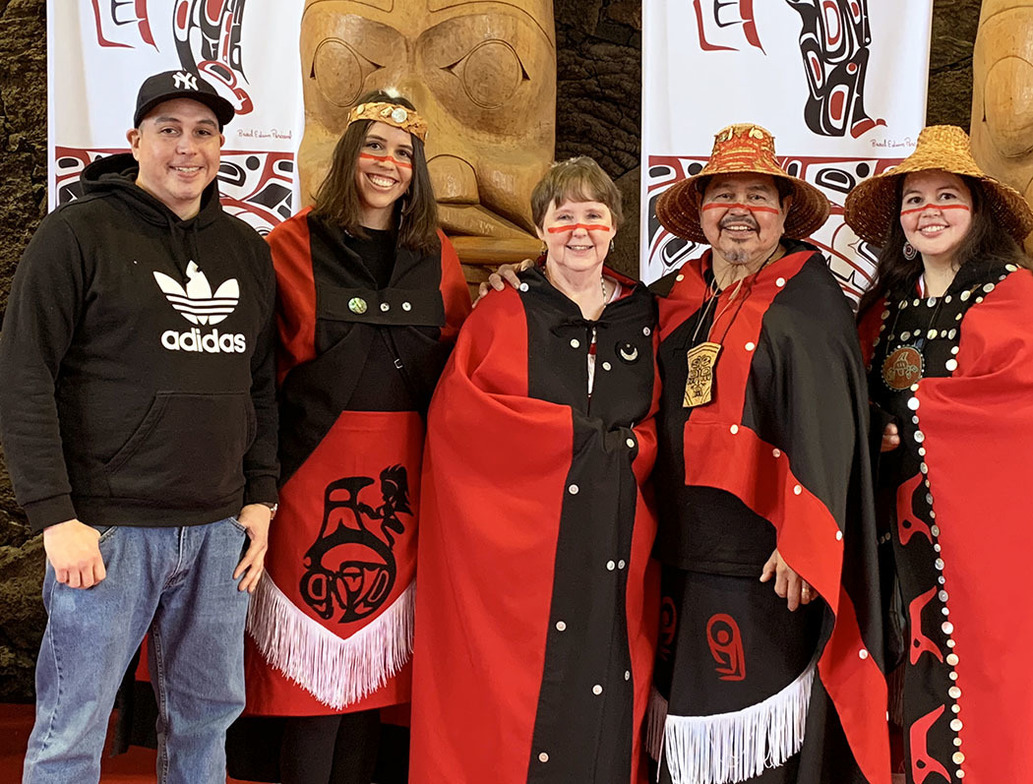 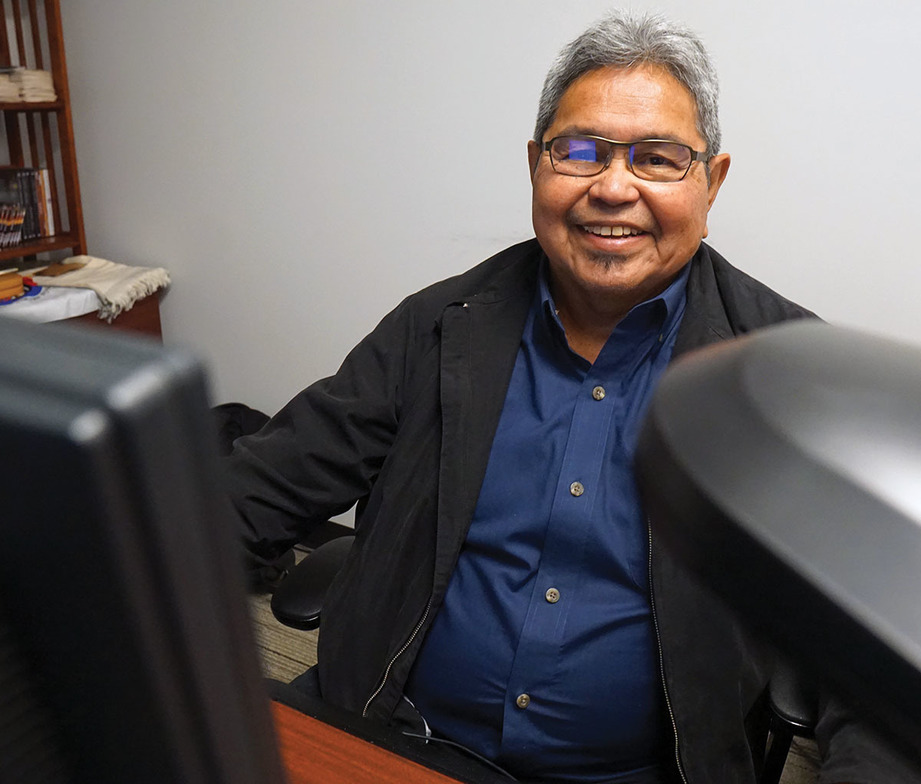 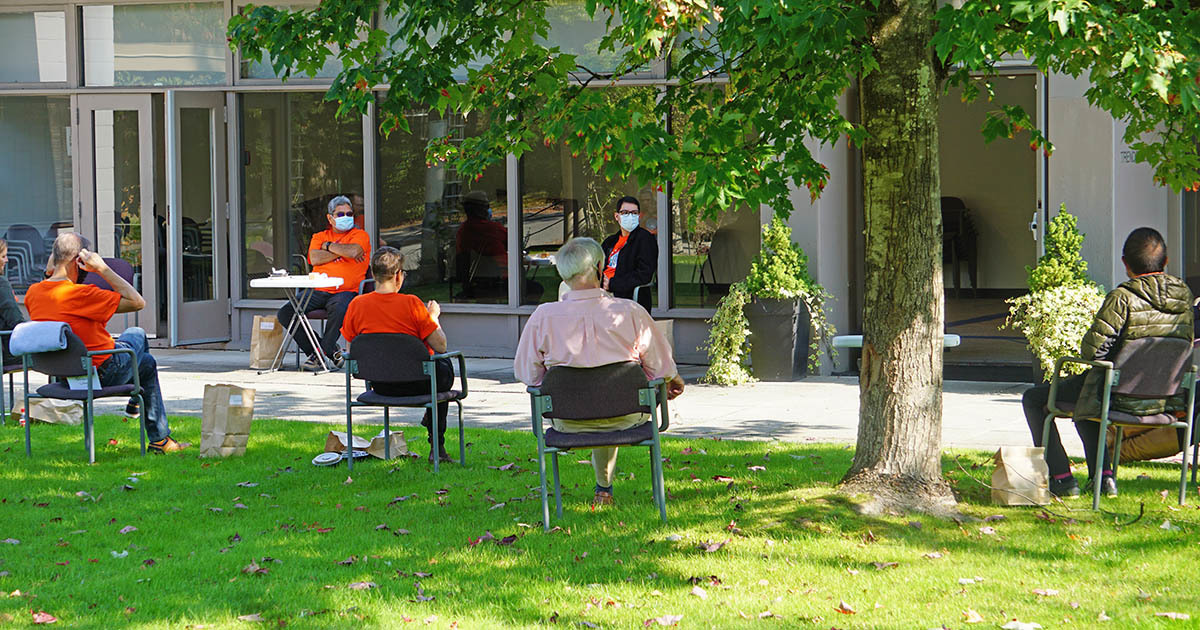 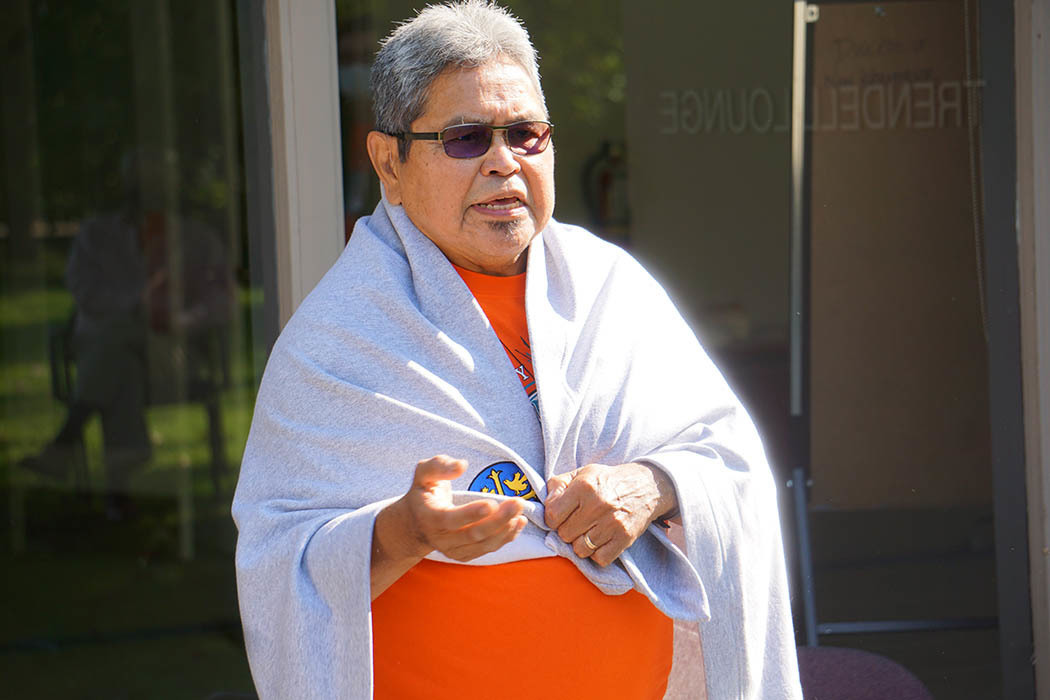 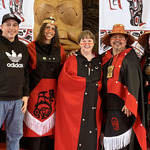 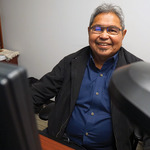 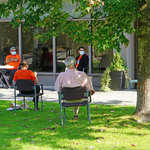 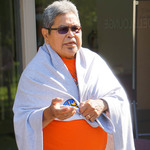 During the September 9, 2020 monthly meeting of Synod Staff, (Jer) Nii K’an Kwsdins aka Jerry Adams announced during the staff check-in segment that he would be leaving the Synod Office at the end of September, retiring from his position as Missioner for Indigenous Justice Ministries, a part time position that began February 13, 2018.

On Wednesday, September 30, 2020, the second official “Orange Shirt Day” the Synod staff of the Diocese of New Westminster gathered in the courtyard outside the Trendell Lounge on the property footprint where you’ll find the Synod Office and St. John’s, Shaughnessy to enjoy a physically distanced meal together and to say farewell to Jerry.  Every member of staff offered a reflection about what having Jerry as a colleague has meant to them. Many of the messages had similar themes of appreciation for Jerry’s patience, leadership, wisdom, counsel, commitment, experience and knowledge. Through his many connections in the still fledgling but growing world of Reconciliation, Jerry was able to involve many more people, gather them and communicate information about what embarking on this journey of Reconciliation is going to entail for the diocese and for the broader church: where we’ve been, where we are now and where we are going. In Jerry's response to the reflections offered by his colleagues, his attitude was optimistic about the future and he expressed his gratitude for the opportunity to be a leader of this ministry in the Diocese of New Westminster, Anglican Church of Canada.

Before he spoke to the staff, Shailene Caparas, Chief Financial Officer for the Diocese of New Westminster and Diocesan Accounting Clerk, Prashanthi Yadavalli participated in a blanketing ceremony, wrapping Jerry in a grey/blue blanket emblazoned with the Diocesan Badge. Jerry, is a member of the Nisga’a First Nation, a long time parishioner of St. James’, Vancouver, a teacher and for most of his career a counsellor, facilitator and administrative leader working in the urban Indigenous community. Jerry developed the Urban Native Youth Association (UNYA) – an initiative located in the Downtown Eastside - before becoming the Executive Director of Circle of Eagles – a programme to assist Indigenous folks returning to the Community after having been incarcerated. He’s worked with Elders, social workers, police and others to form relationships and networks to foster healing, reconciliation and community and following his retirement from Circle of Eagles and the Vancouver Police Department Board, Jerry agreed to share his incredible skills and experience with the lay, clergy and Synod Staff of the Diocese of New Westminster.

During the two and half years he has developed connections with Indigenous leaders and groups as well as establishing the popular First Notions blog and op/ed series, and in-person programming like the annual Feasts for Connection and Reconciliation held at the Synod Office and the Sharing Our Stories guest speaker series. Well-known in diverse communities, Jerry’s reputation for fairness, justice and compassion opened many doors creating opportunities for Indigenous groups not familiar with the ministry of the Anglican Church of Canada to connect, and in best case scenarios begin that ongoing journey of Reconciliation with one of the denominations complicit in the dark legacy of Indian Residential Schools. In recent years, Jerry, with the ongoing support of his spouse, Linda and their grown children has embraced his heritage with vigour and energy becoming a member of Kwhlii Gibaygum Nisga’a dance group and studying the Nisga’a’ language, culture and song traditions. Much of his study has been encouraged by his extended family particularly his nephew Keane Tait.

Many thanks to Jerry for taking some time to answer a few questions:

When did you retire as ED of Circle of Eagles and did you think that you’d go back to work so soon?

I left Circle of Eagles in December of 2017, and started work at the Diocese of New Westminster in February, 2018.  I remember that it was the day before Valentine’s Day and that year, Ash Wednesday fell on the same day. I did not expect to go back to work, thinking I was going to retire and enjoy my new life of freedom. Then Executive Archdeacon Douglas Fenton approached me about working as the Indigenous Justice worker on an interim basis.

What went through your mind when senior diocesan staff approached you about initially filling the diocesan role as an interim and then taking the part time job without term?

My thinking was that interim would be fine, and I could leave by summer 2018. Two and half years later I am retiring again, this being my third attempt at retiring. I guess I have to learn how to say ‘no.’

When you began in the position did you have a sense of how you would approach this ministry?

I did not have a clue on how to approach the Indigenous/Anglican relationship.  For me it was thinking about who we are and what can we do to learn about and appreciate each other.

What do think is the biggest challenge in establishing Indigenous Justice Ministry in a Christian denomination?

I knew it would be difficult because of the lack of trust on either side, and the horrific history of the impact of residential school and churches in general on Indigenous people. The question went through my head of whether I was betraying my people by trying to build a relationship between our people and the Anglican Church. I then thought about my grandparents, my mom and aunties and how devout they were as Christian people. How forgiving they were about losing their children and grandchildren to residential school, and how they still totally believed in God. I had to follow their lead, because no matter how many road blocks were put in front of them, they believed in the good of mankind.

How do you see First Nations spirituality and Christianity existing together, how does that work for you?

I am trying to learn the Lord’s Prayer in Nisga’a, and using my language brings me closer to who I am as a person.  My cousin, the Reverend Gary Davis, is the priest in New Aiyansh, and he offers the Christian sacraments in both the Nisga’a and English language. In the Nisga’a belief system there is one God, and his message was communicated by his grandson. These similarities made Christianity easy for the Nisga’a to accept and make it part of their culture. In my experience there is no struggle between First Nations spirituality and Christianity – the Nisga’a people have blended the two.

What surprised you the most about your time on Synod Staff? Where do you think Indigenous Justice Ministry is headed in the future, are there people who are going to continue your good work?

It was the willingness of the Anglican clergy and lay leadership to give me the freedom to be a Nisga’a, and their hearing and listening to what I had to say as an Indigenous person about what can be offered to the Anglican community.

The future is looking a lot better because the Anglican community is now listening to us and asking us for direction about where to go from here for the benefit of the next generations. We are actually planning, and not just reacting to issues, but building relationships between people.

It is not about my work, but it is the work of all of us and how we help each other that will give us the strength to be one people again. Many people in our churches are working with us and wanting to stand with us rather than telling us how our world should look. We have some very powerful Indigenous leaders in our community that are willing to help us to move in the right direction.

We have two good people who will take my work to the next step.  This is a necessary move because I have gone as far as I can to build the beginnings of our relationships, and I am happy to move on.

There have been many happy times! One of them is having Indigenous Day at the office that involved inviting different Indigenous peoples to perform for our diocese - the Squamish people, Métis people, The Big Drum from the prairies, and of course our Nisga’a people. The Talking Circles were also memorable, featuring our young leaders who have PHDs in Archival Studies and in Education and in Sociology; a VPD Constable; an Indigenous author; and also an Indigenous therapist, and an Indigenous Knowledge Keeper.  This series opened the eyes of our Anglican people in many ways.

I would like to go to my home territory and learn how to can fish, smoke salmon and preserve other traditional foods that I have not learned how to do as an urban Indian. I used to introduce myself as “Starbucks from the Latte Tribe” to make fun of my urban status.

I would like to thank Archbishop Melissa and Archdeacon Douglas for giving me the freedom to work toward building a relationship between our people and the Anglican Church.  Also Linda my wife, as my undying editor, and to you for making me look good in print and editing my work as well. I am thankful for the generosity of the Synod Office staff for believing in me.

We will get there, but with still a lot to do yet.

IN THE TOP SCROLL