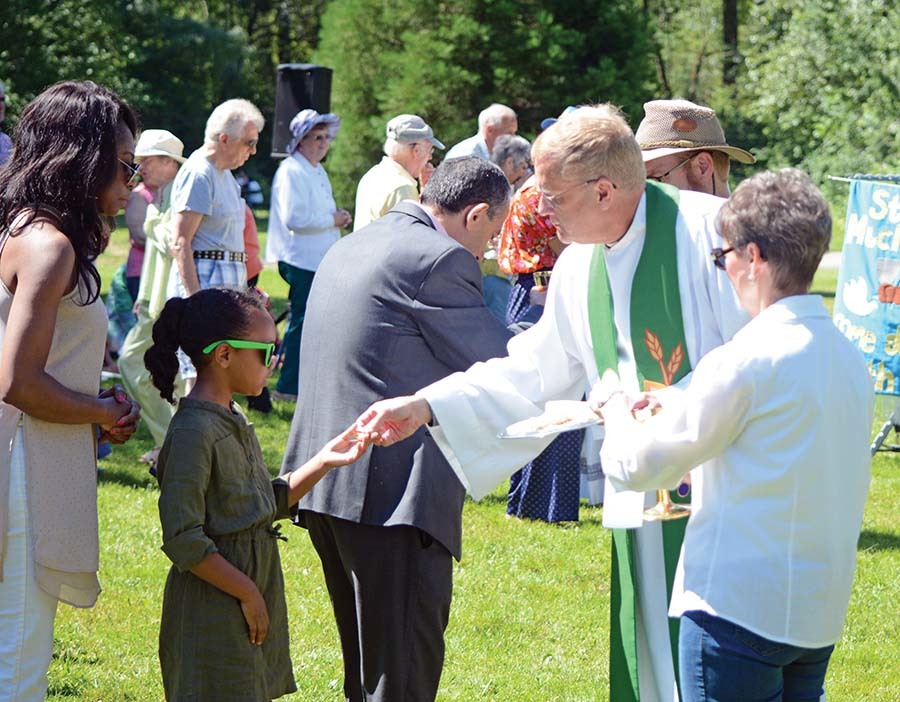 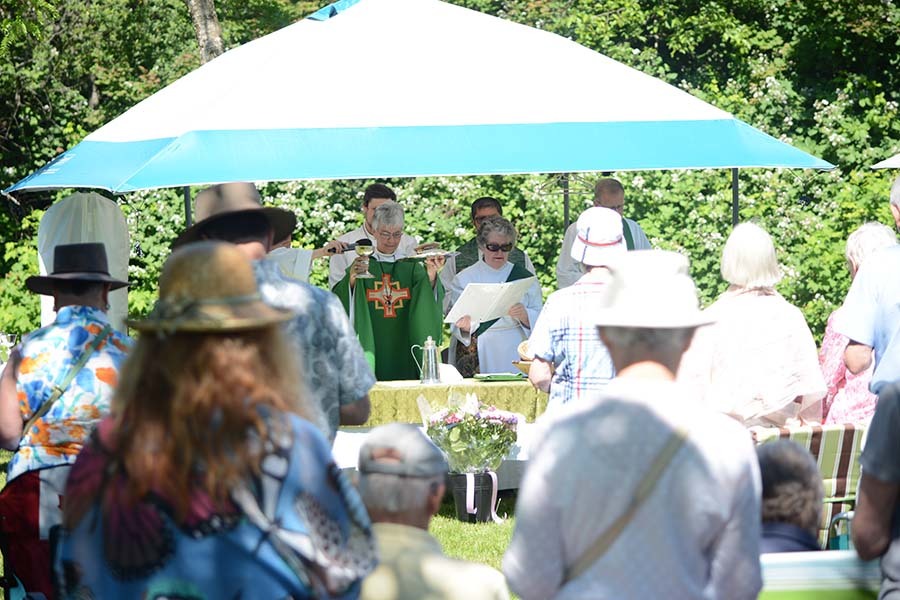 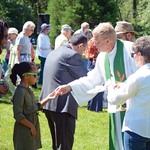 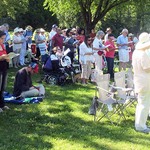 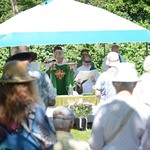 The fifth annual Surrey Tri-Parish Eucharist and Picnic with Archbishop Melissa Skelton presiding and preaching took place at Bear Creek Park the morning of June 17, the Fourth Sunday after Pentecost also “Father’s Day.” Sunday, June 17 was the second day of a 5-6 day period of hot weather predicted for most of British Columbia and it was indeed a very warm but pleasant morning. However, the mercury did climb to 32 degrees by 1pm that afternoon.

Awnings were set up to shade the sanctuary party, choir, audio mix position and the musician’s space; the worshippers, mostly members of three Surrey parishes: Church of the Epiphany (Epiphany); St. Helen’s; St. Michaels set up lawn chairs and blankets to the east of the awning covering the altar in a space shaded by trees just a few meters south of the picnic area.

This annual event is organized by members of each of the three parishes meeting together in a modified version of the former MAP (Ministry Assessment Process) committee with one parish taking the primary responsibility for the considerable task of coordinating a full outdoor Celebration of the Eucharist and a potluck picnic lunch. For 2018, the lead parish was ‘Epiphany.” Last year’s event had been rained out, however contingency plans had been made and the 2017 combined worship and luncheon took place at St. Michael’s.

At approximately 10:15am, the rector of Epiphany, the Reverend Stephen Rowe came to the microphone and presented the pre-worship announcements. He rehearsed the “Gloria” with the congregation as it was a setting with which some folks might not be familiar and also presented an overview of the morning’s events.

Prior to the Gathering Hymn, “All Hail the Power of Jesus’ Name”, Shelley Prendergast, ODNW, a warden at ‘Epiphany’ presented Archbishop Skelton with a huge bouquet of flowers to mark her recent election May 12 as Metropolitan and Archbishop on behalf of the three parishes.

Archbishop Skelton presented the Children’s Talk based on the Gospel for the day, Mark 4: 26-34. In her interactive address with the younger members of the three congregations she emphasized the importance of “small things,” which because of their misinterpreted insignificance may be overlooked but to God “small things” are important.  There is a video of the Children’s Talk posted here on this page.

For her sermon, Archbishop Skelton again focused on the Gospel but also made reference to the other readings. She began her sermon by saying that this would be a story of two Kingdoms, the Kingdom occupied by royalty and what Jesus often referred to as the Kingdom of God.

(A video of the sermon is available by accessing this link.)

As has become traditional at this liturgy, members of all three parishes participated in the various liturgical and organizational roles: music in worship leaders, readers, intercessor, sound engineering, food coordination, set-up/tear-down, transportation, Archbishop’s Chaplain, Sacristan and many more.

Matthew Ma of St. Helen’s is an excellent pianist and did a very fine job of accompanying the congregational singing that was enhanced by a small combined choir and the trumpet of Epiphany’s music director, Elizabeth Gilchrist. The sound, quarterbacked by Dave Dyer of Epiphany was excellent, crystal clear and a hearty volume despite the occasional gusts of wind and intermittent interruptions of the wireless signal.

After worship, lunch was served as a large potluck buffet had been laid out on one of the two sets of covered picnic tables at Bear Creek Park. Folks formed parish groups, family groups and random groups in the shaded areas of the park, spent time together, sampled the wide assortment of great food and enjoyed the “small things” that bring us joy on a bright, sunny early afternoon in June.