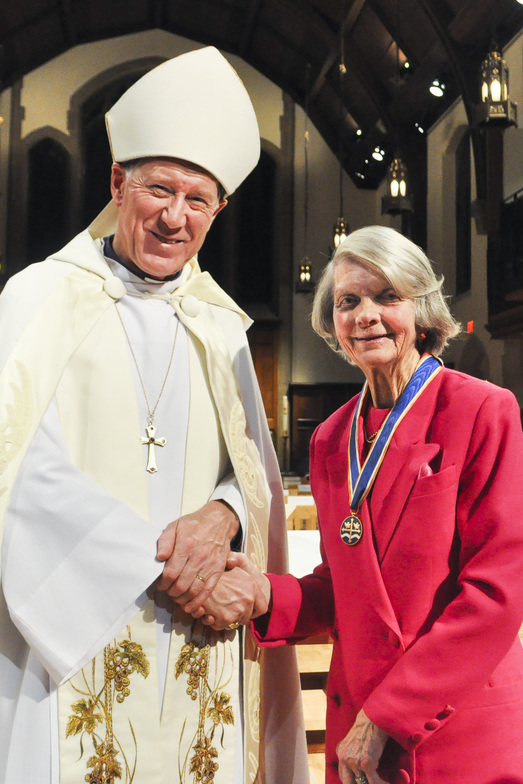 Peg was born and raised in Lethbridge, Alberta. She received her Bachelor of Education from the University of Alberta. Upon graduation, she had an opportunity to teach at the Wilson Hutterite Colony, East of Lethbridge, an experience she said was invaluable.

Peg married Don in 1953. With three children under the age of 7, they moved to Vancouver in the summer of 1962. They loved living here. They were Founding Members of The Arbutus Club. A place where they could enjoy their passions, curling, tennis, bridge and their children could find theirs.
Many wonderful memories were also created over the years at their home in Qualicum Beach.

Peg was a very active member of St. John’s, Shaughnessy taking on many roles around the parish.  She was particularly fond of the music and supported the Organ Fund generously in all of the work of refurbishment in the last few years.  More recently, Peg was not able to attend regularly, as her mobility was compromised, but she delighted in knowing about the growth and ministry of her parish.

A member of St. John’s, Shaughnessy for 58 years Peg was invested into the Order of the Diocese of New Westminster by the Most Reverend Fred Hiltz in November of 2013.

Peg has been a member of St. John’s, Shaughnessy since the early 1960s. She took a quiet and firm stance against the St. John’s Vancouver movement. Today, as the longest serving member of the parish, we honour her and her faithful 51 years of service to St. John’s.

Following the Provincial Health Officer’s a funeral service will be held on November 28, 2020, with only the family present. Flowers are gratefully declined. Should you wish, donations may be made to St. John's (Shaughnessy) Church.

She will be greatly missed.  May she rest in peace.  And rise in glory.