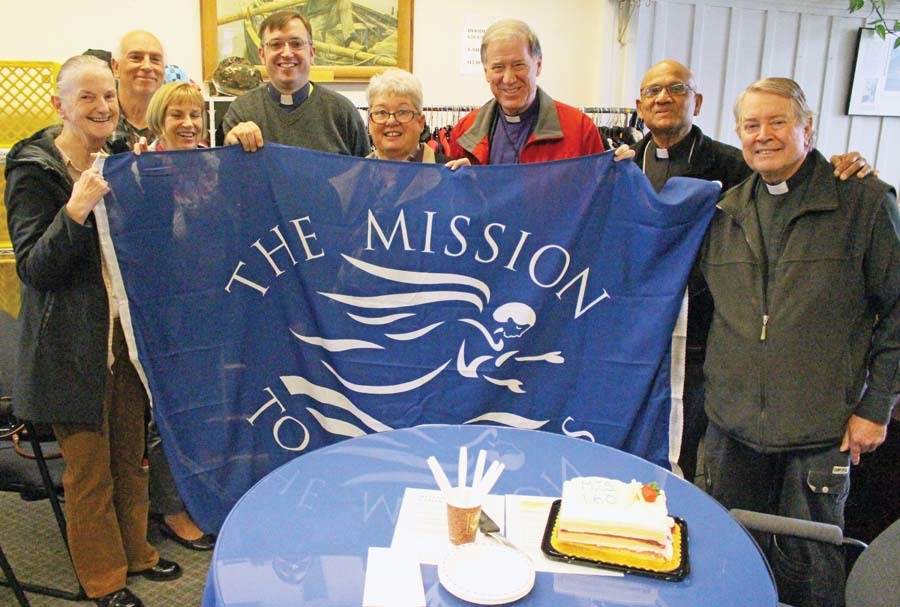 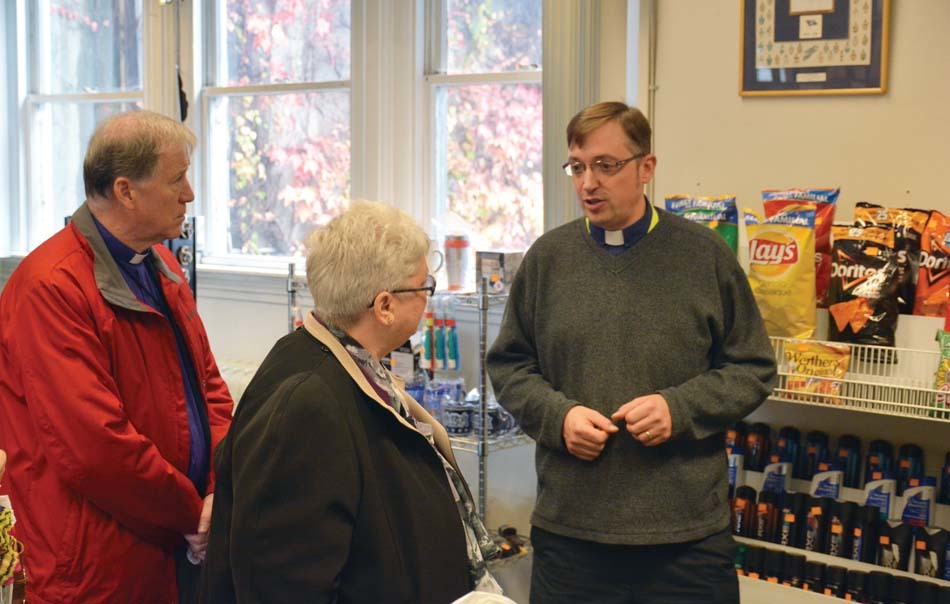 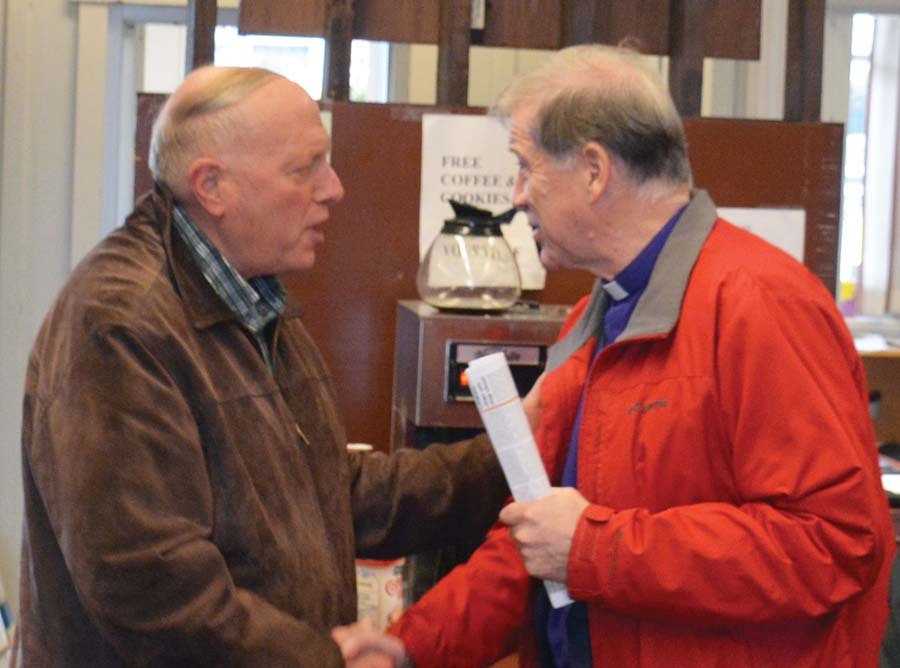 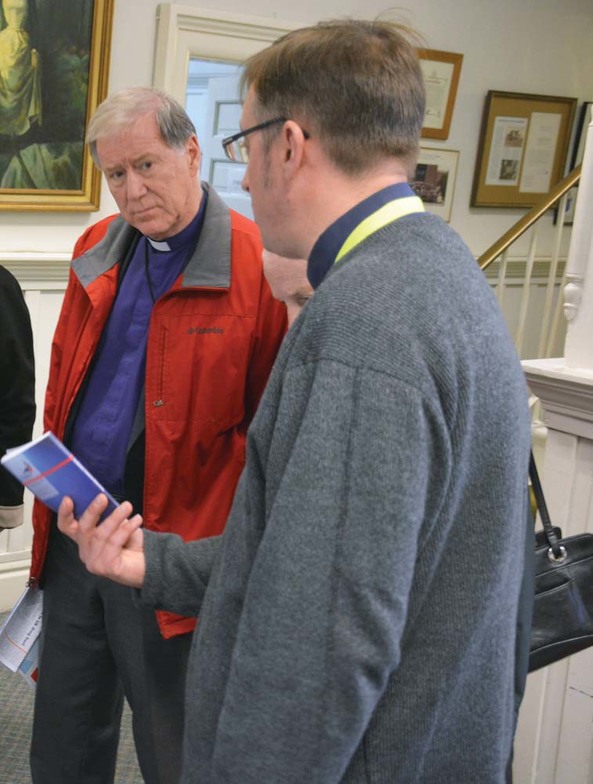 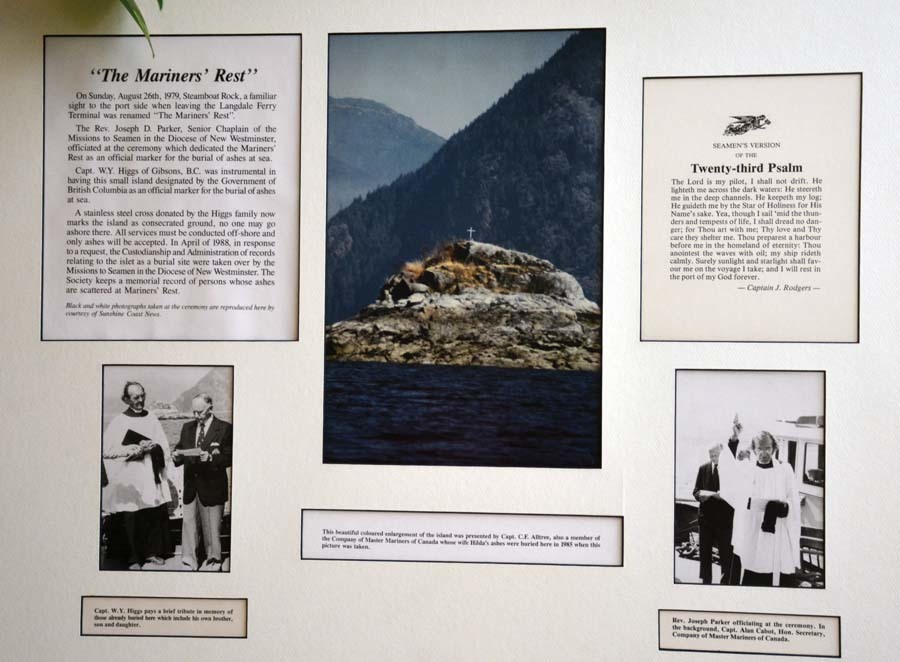 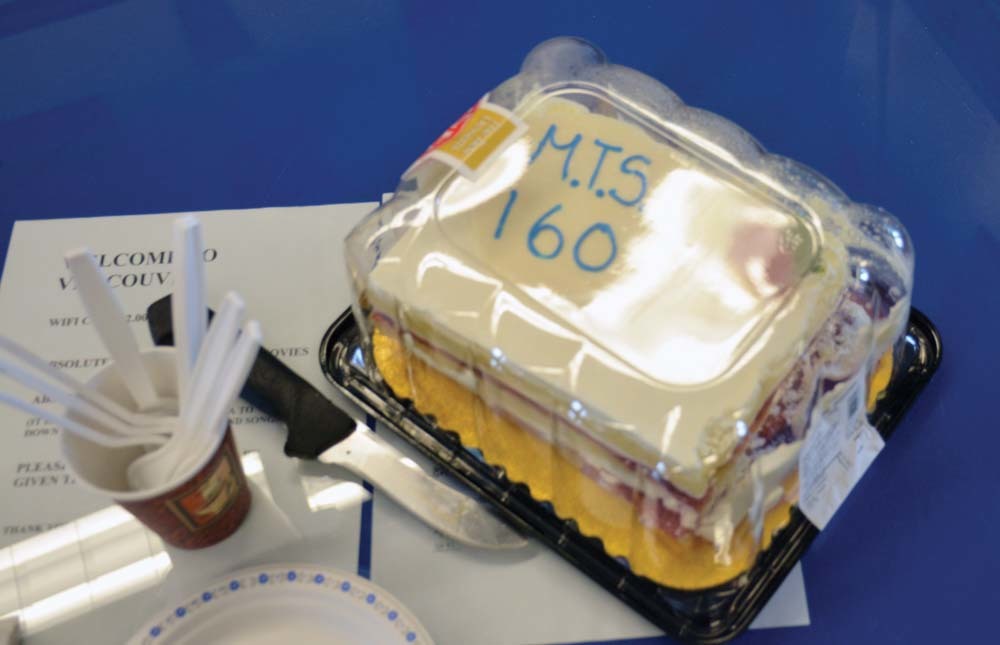 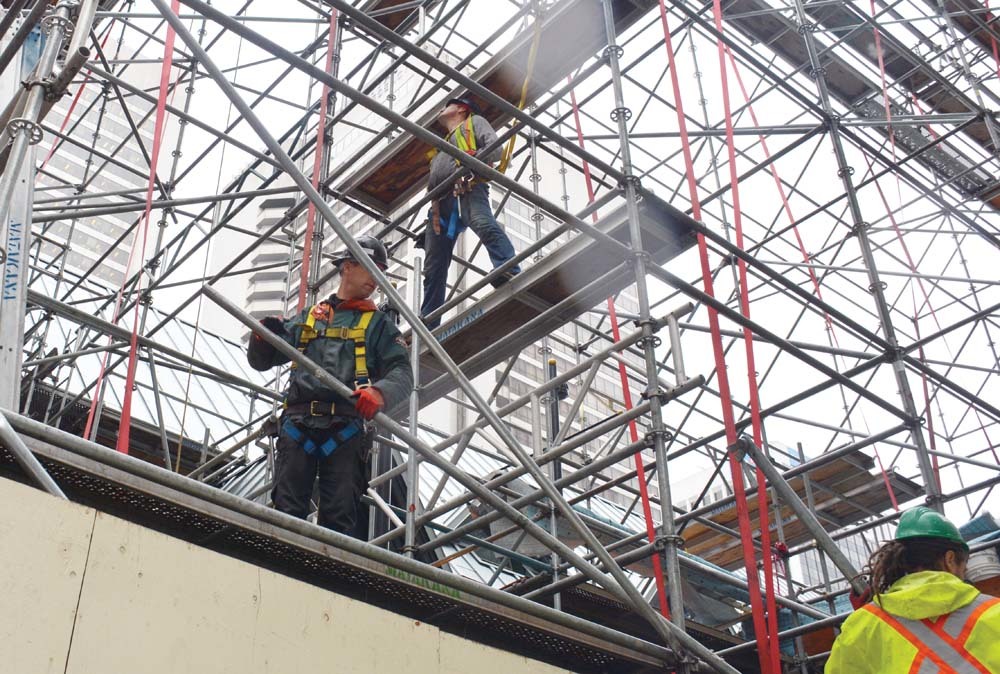 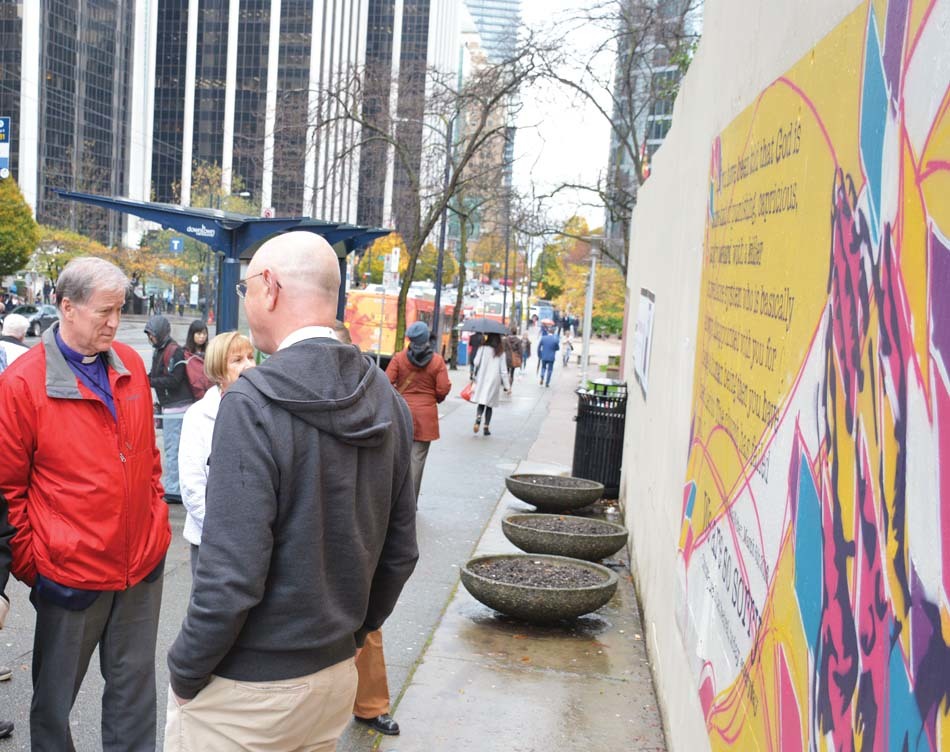 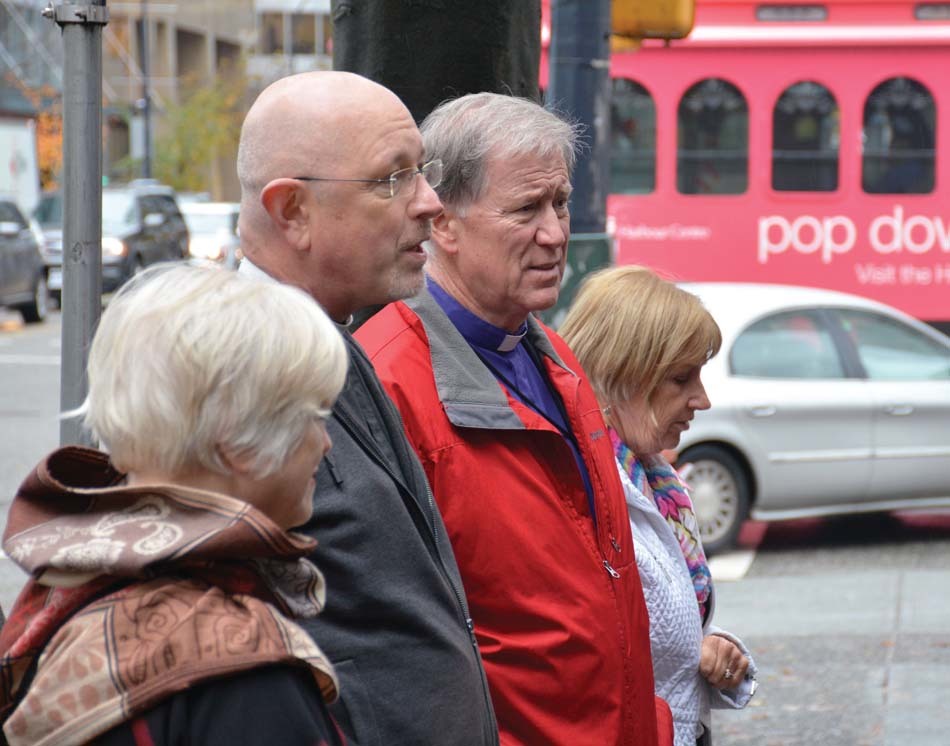 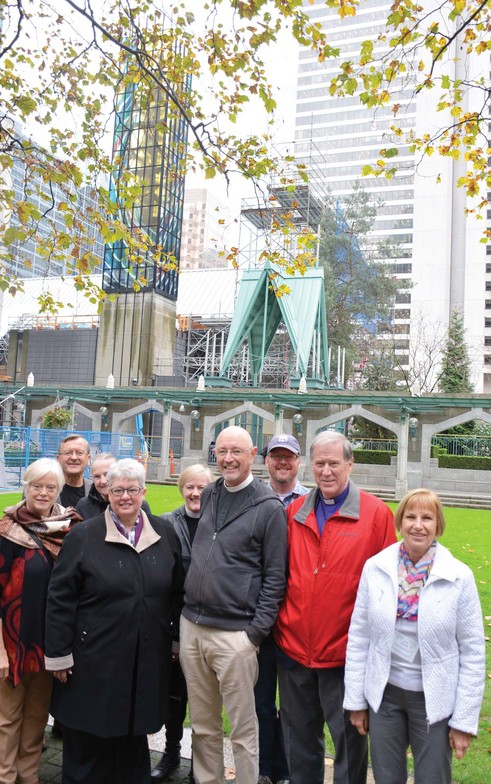 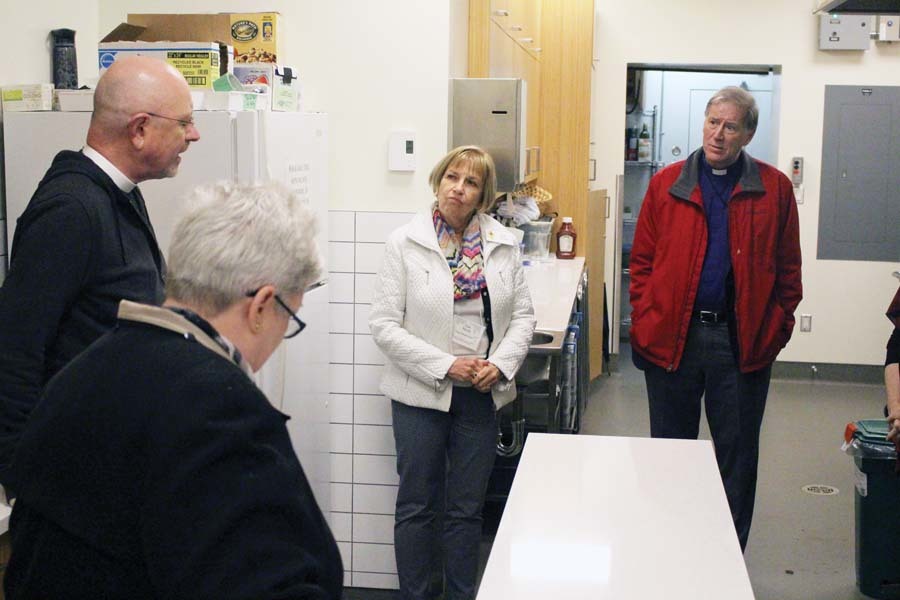 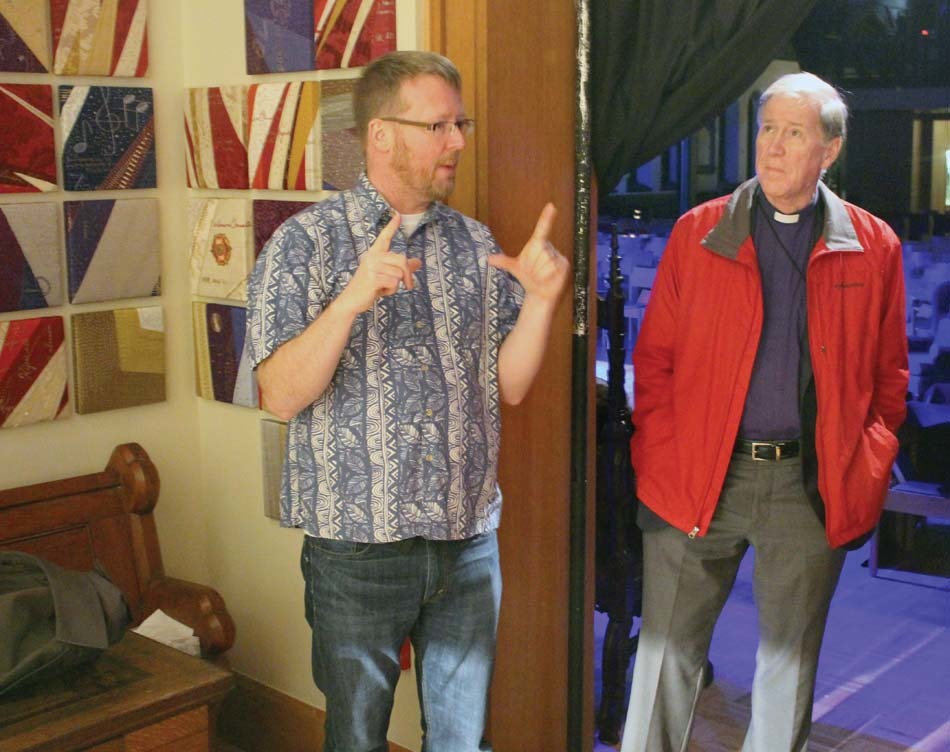 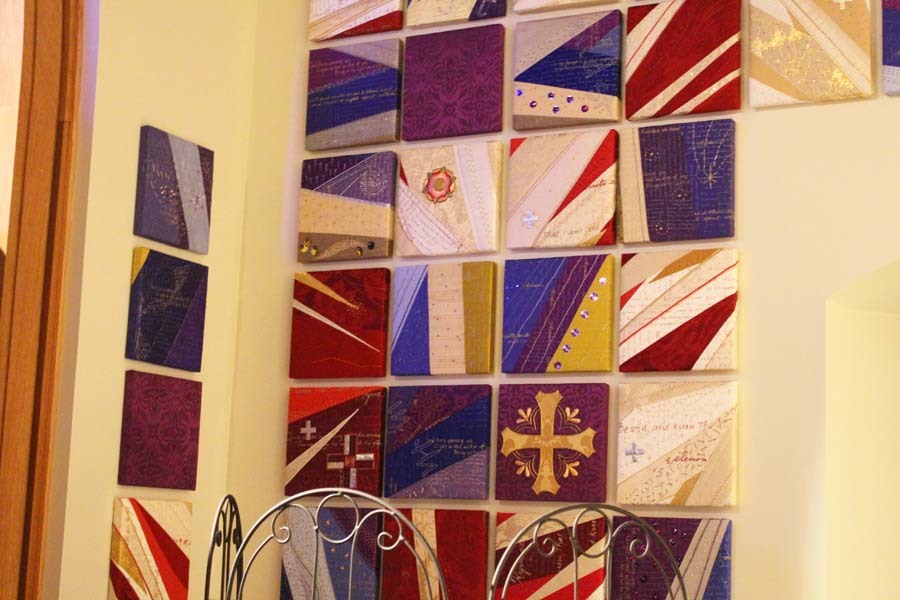 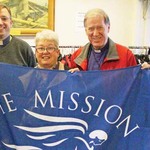 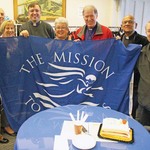 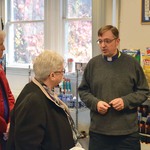 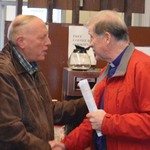 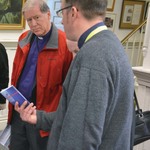 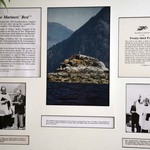 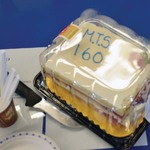 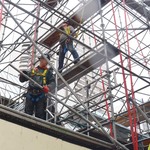 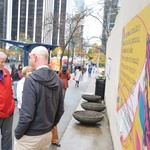 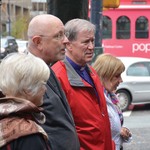 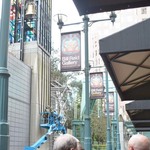 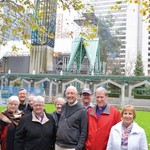 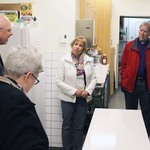 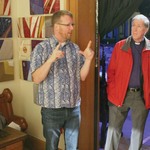 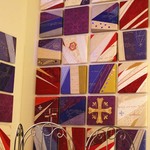 Archbishop Fred Hiltz’s whirlwind visit to the Diocese of New Westminster October 26-28 was primarily about his presence at the Anglican Church Women (ACW) National Presidents Meeting held in Langley, BC. He did however take a day on Thursday, October 27 to visit three sites in Greater Vancouver; ACW Place in Burnaby, The Mission to Seafarers’s Flying Angel Club at the Vancouver seaport and Christ Church Cathedral in downtown Vancouver. Joining the Primate was the Right Reverend Barbara Andrews, Bishop of the Anglican Parishes of the Central Interior (APCI), now called the Territory of the People  (please visit the new website: http://www.territoryofthepeople.ca/) who was the Council of the North’s representative at the ACW President’s meeting.

Following the visit to ACW Place the archbishop and bishop were transported by their ACW hosts, Gail Revitt and Vera Morgan to the Mission to Seafarers’s (MtS) Flying Angel Club. Senior Port Chaplain, the Reverend Peter Smyth and the staff of MtS had gathered in the main space of the Edwardian structure to greet the guests.  Not only was this a chance to share the pleasant surroundings and information about the Mission, this was also an opportunity to celebrate the 160th Anniversary of the Mission to Seafarers that originated with the vision of Fr. John Ashely on the banks of the Bristol Channel in 1835. This ministry to seafarers was repeated in a number of forms and locations in England during the next two decades culminating in a gathering of these groups in 1856, formally organized under the title The Mission to Seamen Afloat, at Home and Abroad. In 1858, the name of the organization was shortened to The Mission to Seamen and the organization adopted the now very familiar Flying Angel logo. Diocesan PWRDF Unit chair and St. James’ parishioner Peter Goodwin who is a volunteer and ongoing supporter of MtS was also present for the primate’s visit.

After the guests had been greeted, Rev. Smyth described the current ministry, operations and ecumenical nature of the Mission.  Many of the seafarers who visit are Filipino Roman Catholics, and in increasing numbers Muslims from Indonesia so there are often “rich conversations about faith.” The shop located in the main area does a brisk trade in chocolate, toiletries and Subscriber Identity Modules (SIM cards) for mobile communications devices. During the tour of the facility Rev. Smyth pointed out the TV room, computer room, clothing room and pool table. He told the guests that due to the almost universal use of mobile devices the TV and computer rooms no longer experience much use. Rev. Smyth also shared that much of the worship now takes place shipboard (usually at the request of the captain) and very rarely in the chapel. However, on occasion the MtS team does worship together in the chapel.

Archbishop Fred, Bishop Barbara and the guests were very interested in the information provided about the Mariner’s Memorial Book which for over 100 years has been used to record the name of any British Columbian seaman or any overseas seaman who dies in the waters of British Columbia. The full name is recorded along with the date of death and the name of the last ship. The pages of the book are turned each morning during morning prayers.   In a frame on the wall above the book is the story of “The Mariner’s Rest”, formerly “Steamboat Rock”, a familiar seamark visible to the port side when leaving the Langdale BC Ferries terminal outside of Gibson’s.  Since 1979 The Mariner’s Rest” is the official marker for the burial of ashes at sea.

The visit concluded with guests, volunteers and MtS staff posing for a photograph to memorialize the visit and to honour the 160th anniversary. The photo op was followed  by a prayer led by Archbishop Fred, and the enjoyment of a strawberries and cream cake.

The next and final official stop for archbishop and bishop before heading back was Christ Church, Vancouver, the Cathedral Church of the diocese located in the heart of downtown. The Cathedral building was coming to the end of its current phase of renovation which involved the replacement of the roof, the building of a new bell spire and the expansion and total refit of the kitchen. The dean of the diocese and rector of Christ Church Cathedral, the Very Reverend Peter Elliott was joined by his spouse, textile artist, Thomas Roach; Cathedral Vicar, the Reverend Dr. Ellen Clark-King; Associate Warden, Ian Birtwell; and two guests, former Executive Director of the Primates World Relief and Development Fund (PWRDF) Adele Finney (now retired and living in British Columbia) and her spouse the Venerable Gordon Finney.

The group exited out from the lower level of the church building and walked out on to Burrard Street. Dean Peter pointed out the various pieces of art and philosophy displayed on the hoarding boards that encircled the building before bringing the group to a stop at the entrance of the neighbouring Cathedral Place building where the Cathedral cohort offered explanations about the work that had been done and in some cases was still underway. The group then went up to the Hornby street level and standing beside the common grass area shared by the Bill Reid Gallery and Cathedral Place were treated to a view of the new bell spire and the information about the bell spire. The design and construction of the bell spire involved dozens of artists and tradespeople. The tower was designed by Hugh Cochlin and Ben Nielsen of Proscenium Architecture + Interiors, and the cross was designed by Ben Nielsen.  The four bronze bells were designed and cast by Paccard Foundry of Annecy France.  The stained glass, “Welcoming Light” was designed by Sarah Hall. The stained glass was fabricated in Germany and shipped to Kitsilano Glass, Richmond where the glass was cut and placed in each of the 204 panels.  The roof, bell spire and kitchen will be blessed and dedicated by Bishop Skelton, November 17, 2016 at 4:30pm.

After a stop in the Cathedral's newly appointed kitchen which is now able to serve upwards of 100 hungry people per day the group made their way upstairs. Although the Cathedral’s sanctuary was closed due to preparations for an elaborate musical production taking place in the evenings, the group made their way to the northeast prayer alcove where Thomas Roach explained the “Prayers of the Church” project which he and other textile artists in the community had undertaken.

Then it was time for the primate, the bishop and their ACW hosts to begin the trip to St. George, Fort Langley where the ACW President's Installation Eucharist would be celebrated later that evening.