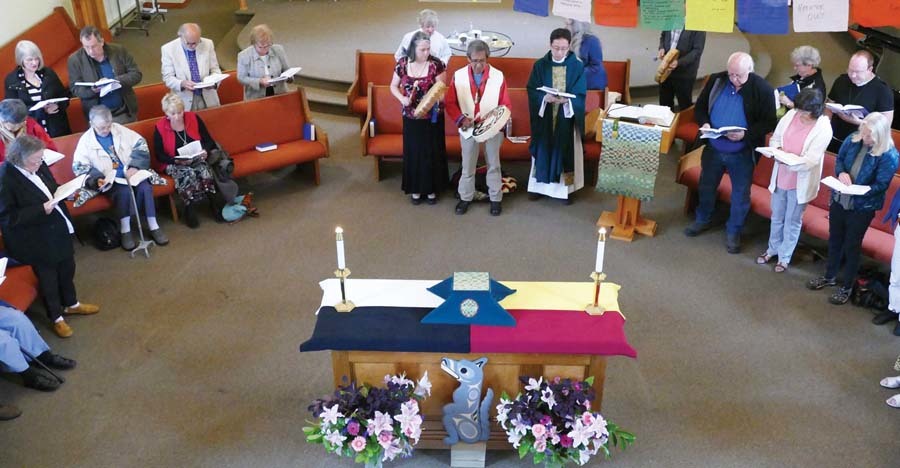 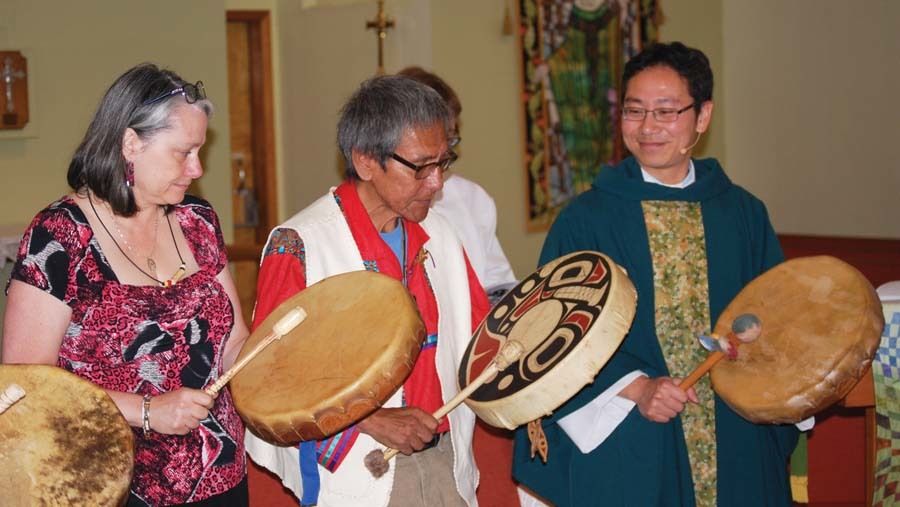 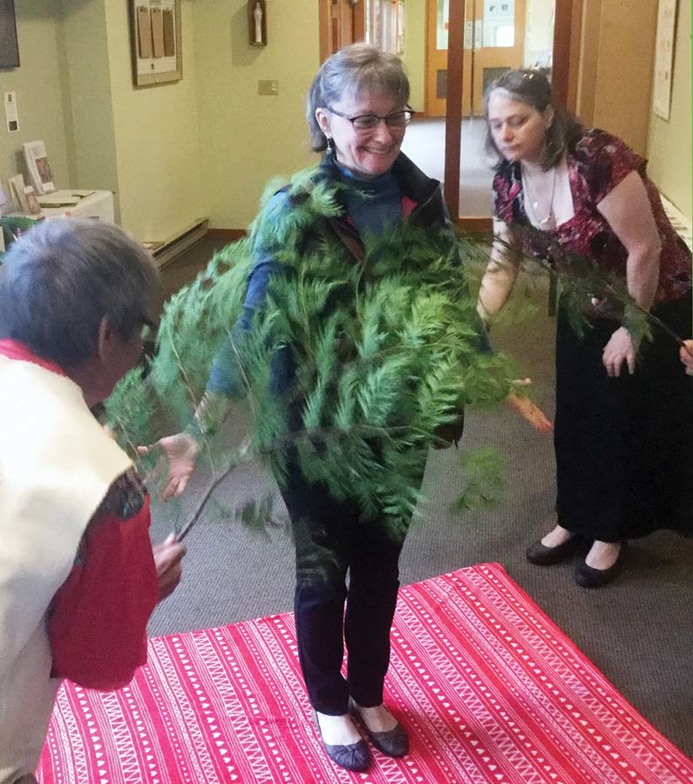 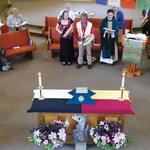 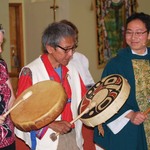 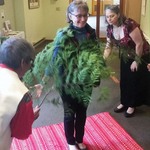 National Aboriginal Day in Canada was June 21, and has now been designated National Indigenous Peoples Day.  At St Hilda’s in Sechelt our Social Justice Outreach Ministry has intentionally stepped into learning more about the history of our First Nations People, and specifically the shíshálh First Nation, on whose unceded traditional territory our Church is located.  We are committed to being part of the Anglican Church’s commitment to respond to the Calls to Action from the Truth and Reconciliation Commission, and partnering with our local shíshálh community to be part of the healing in all our relationships.  This year we held our Aboriginal Day service on June 18 to celebrate, honour and learn from our First Nations brothers and sisters.

The sanctuary seating was arranged in a circle and prayer flags were hung across the room. Written on the flags were prayers in many languages - German, Dutch, Filipino, Cantonese, Gaelic, Hebrew, Arabic, shíshálh, and English.  Our altar cloth was yellow, black, red and white to represent the traditional indigenous way of marking the four directions. In front of the altar was a grey wolf carving made for the church by Tony Paul a shíshálh master carver. Also in our sacred space was a two row wampum belt made by John and Nancy Denham.  As parishioners entered they were invited to experience Cedar Brushing, a purification ceremony, which was done by our First Nations friends Terry “Coyote” Aleck and Christine Turenne, assisted by John and Nancy Denham.  We incorporated into our service a welcome song sung and drummed by Terry and Christine, John and Nancy and our priest, the Reverend Clarence Li.

The first reading was the First People’s Principles of Learning read by Dave Moul (Settler). These 9 learning principles were also a key part of the 2017 Diocese of New Westminster Synod held May 26 and 27. The second reading, read by Gayle McDonald (Metis), was about First Nation Spirituality and in particular the significance of the circle as told by Black Elk.

Instead of a sermon, Terry “Coyote” Aleck offered teachings.  He spoke about  his journey, through the pain of Residential Schools, the abuses and the resulting emptiness that became his interior life. He shared that within the desperation of emptiness his cry to the Creator was answered with interventions that brought surprising people alongside, calling him reach into the depths where his true identity had a small flickering flame.  Reaching for the light, for the wisdom he learned from his elders and his ancestors, became the wind that gently fanned his inner candle to stay lit.  Coyote encouraged us to each take the journey of forgiveness and healing where we need it in our own lives, and to never forget that God is always with us, in us and around us.

Throughout the service there were many new things, such as; the song  Sweetgrass (Cedar) and Candle; a native American setting of the seven directions skilfully incorporated into the Prayers of the People; a recitation of the Lord’s prayer using a First Nations interpretation and the use of the shíshálh way of saying Amen. (?íy kwe stsxwínáms (pronounced as: ay kweess kway-nams). The service ended with a postlude recording of Susan Aglukark’s “O Siem.”

Rector of St. Hilda’s, the Reverend Clarence Li said this:

“Indigenous Peoples and peoples from other cultures within our church have gifts to offer each other on that journey. For too long, however, barriers of assumed cultural and religious superiority by European-Canadians have overlooked and even denigrated the gifts of aboriginal peoples. The Anglican Indigenous Covenant is a vision that upholds self-determination for Indigenous Anglicans within our church, and invites to partnership those who would help this vision unfold. The first step of partnership is hospitality in our midst to the gifts that Indigenous people offer… I invite you to offer hospitality to ceremonies, traditions, and teachings which are not familiar to you and receive them as rain watering dry ground. I invite you to move beyond past wrongs and commit yourself in forging new relationships based on respect and non-interference. I invite you to be the body of Christ for the sake of the blessed yet broken world we live in.

It was a gift to honour Aboriginal Day (National Indigenous People’s Day as it is now called) with our First Nations friends, and to be part of this journey of healing that the Anglican Church invites into.  Special thanks to the Worship Committee who designed the service:  Rev. Clarence Li, Bev Niebergall, Katherine Hume (Music Director), Stephanie and David Moul.

Submitted by Stephanie and David Moul