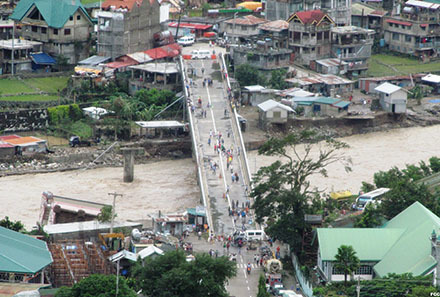 The following news was received on Monday, September 24 from Mr. Victor Ananyo in the Diocesan Office in Bontoc, Philippines in response to our assurances of prayerful support for our Companions, the Episcopal Diocese of Northern Philippines in the wake of Typhoon Mangkhut:

Thank you very much for your prayers for us in the wake of the typhoon.The wind and rain lasted less than 24 hours last Sept. 15 but it left so much damage especially in EDNL (Episcopal Diocese of Northern Luzon), EDS (Episcopal Diocese of Santiago) and EDNCP (Episcopal Diocese of Northern Philippines). Much of the damage in Mountain Province are on the roads and bridges. Mercifully, houses and buildings suffered minor damages, except for two houses which were buried by a big landslide along the Sagada road. The roads to Baguio and Tabuk City are still closed. We just got our internet signal today but it's still unstable. I better send this email NOW!

The most effective way to communicate with your Companion Parish(s) is through Facebook.
Diocesan Ministries
Related Groups