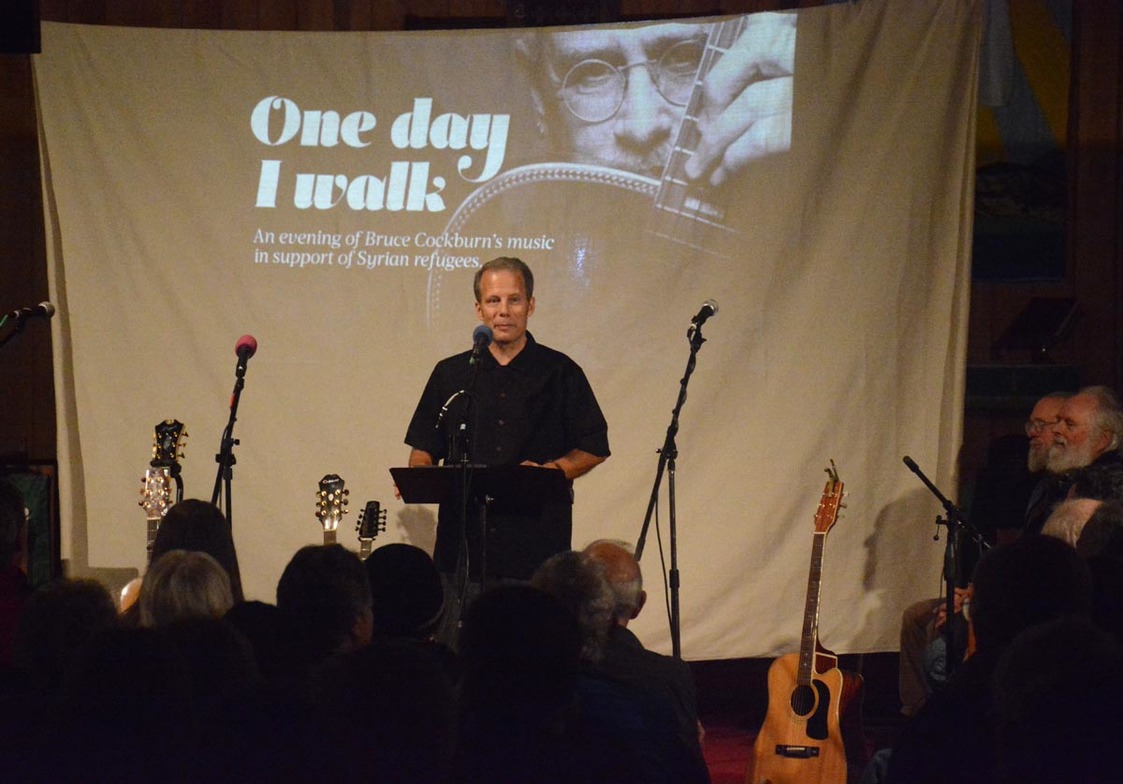 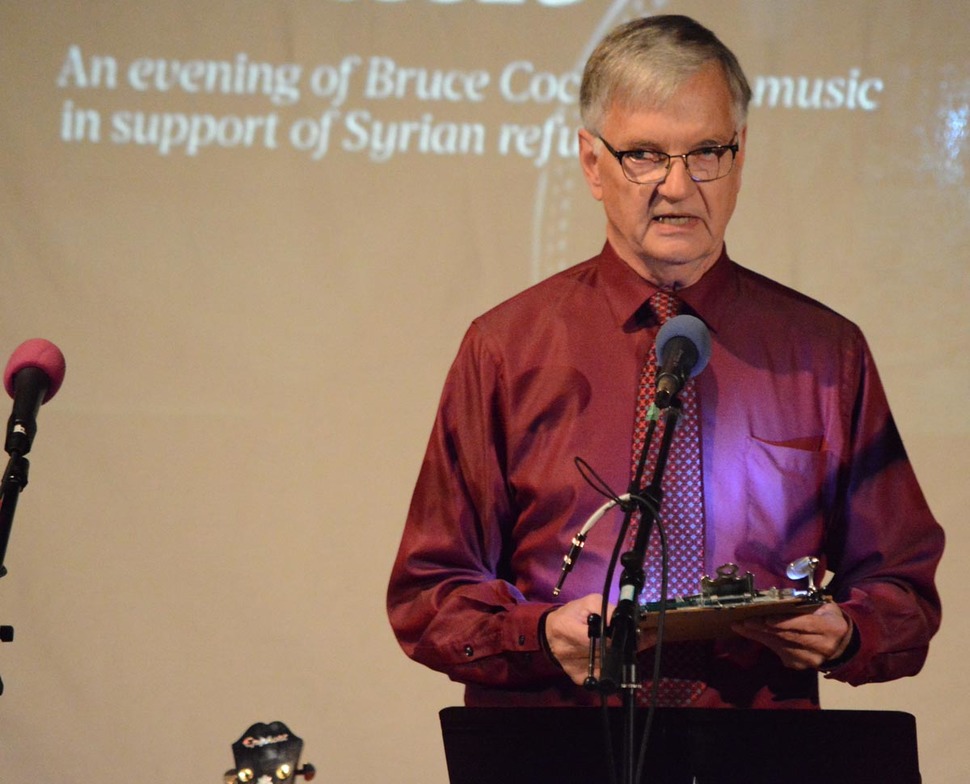 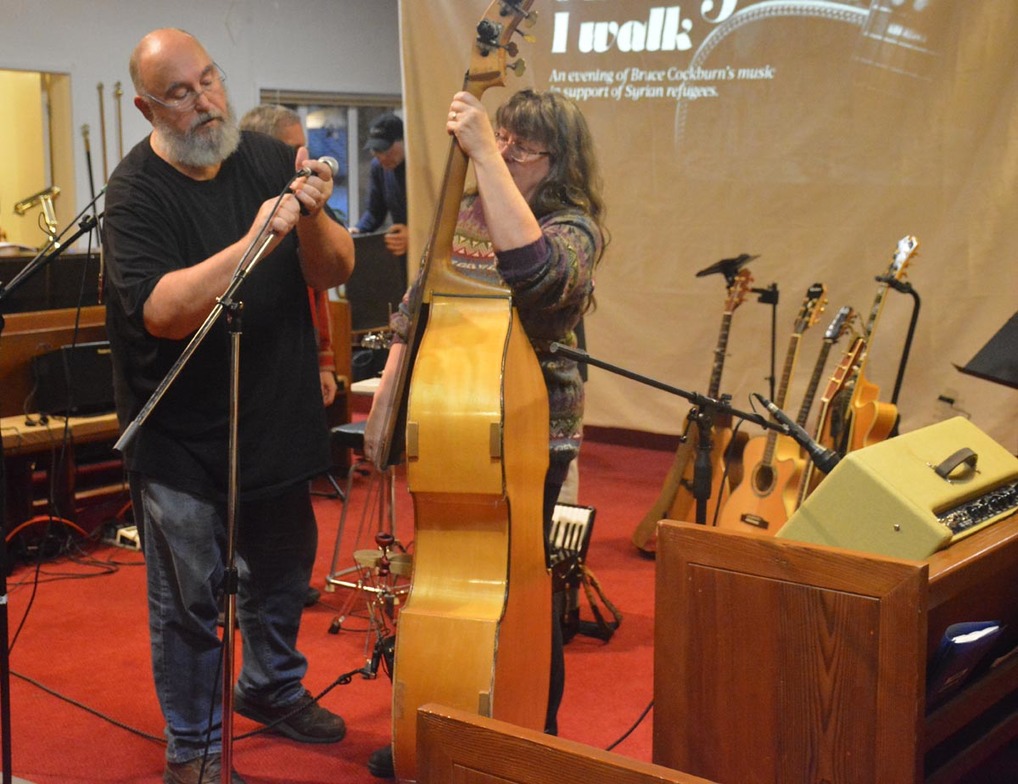 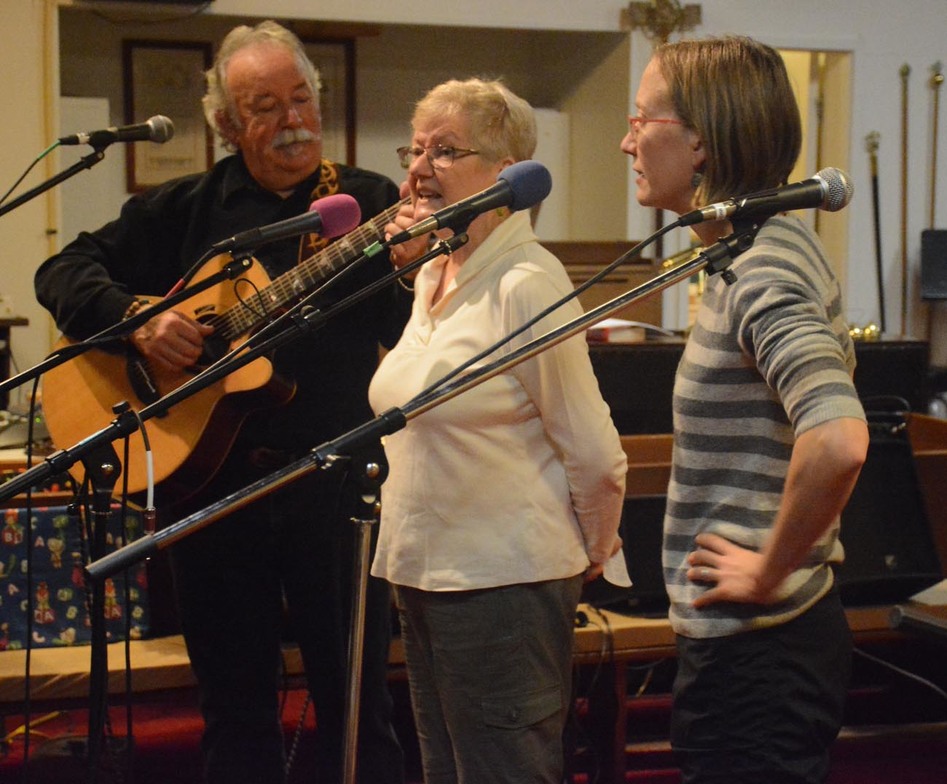 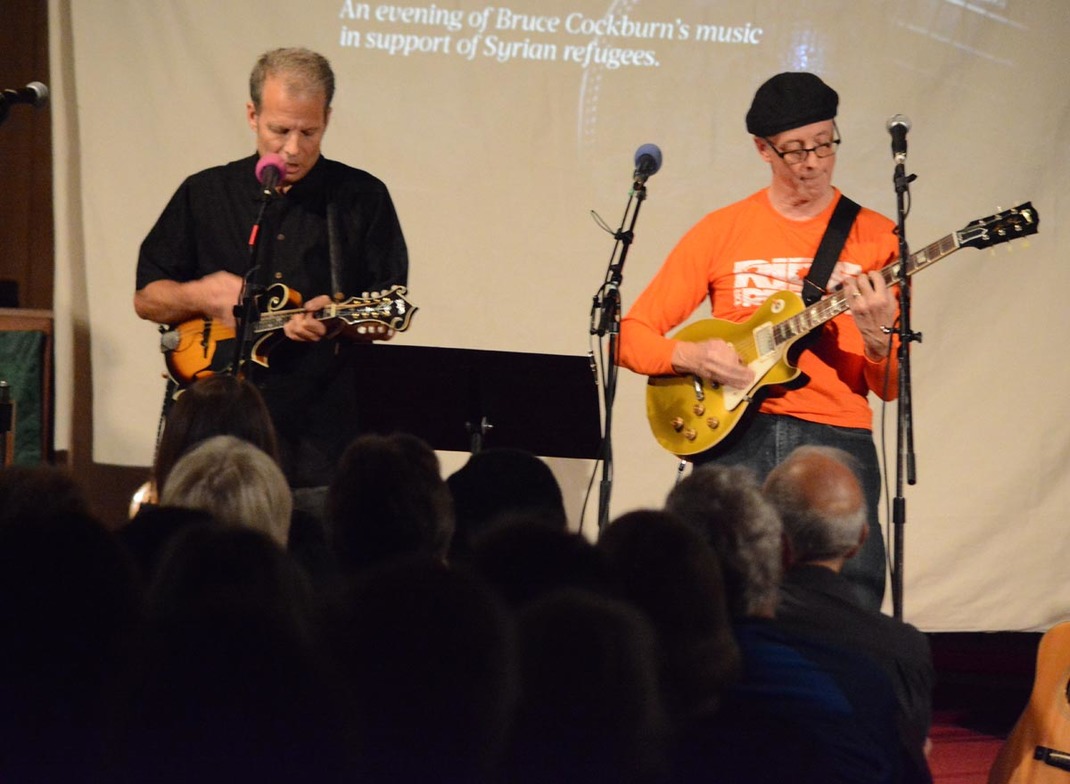 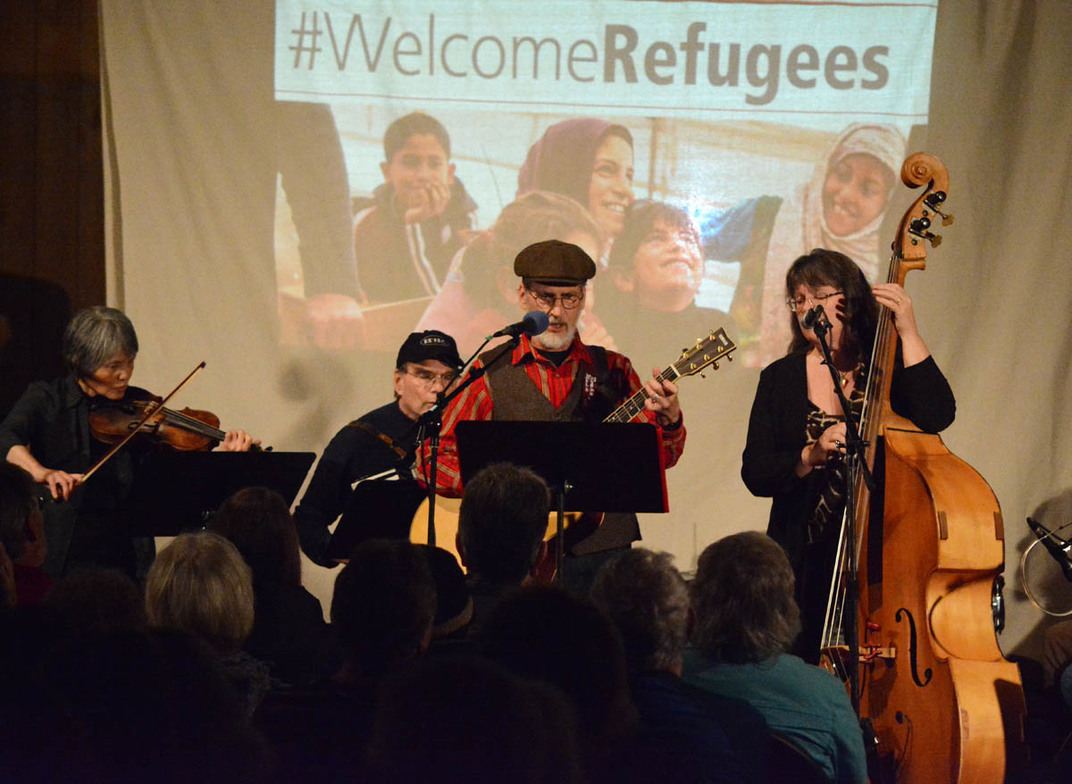 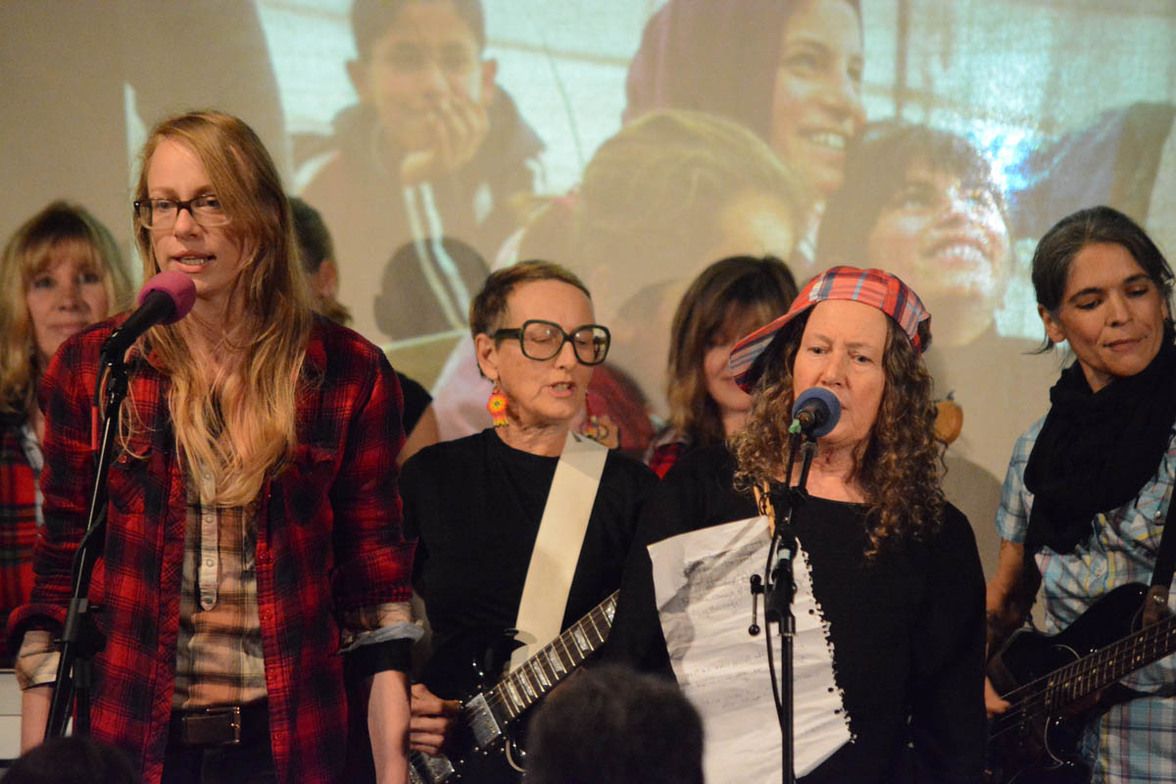 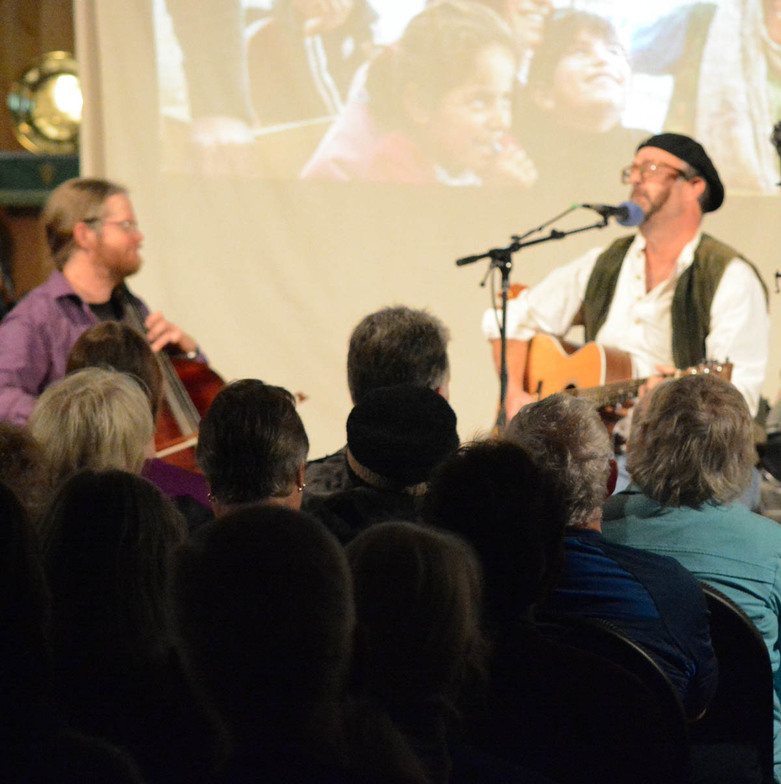 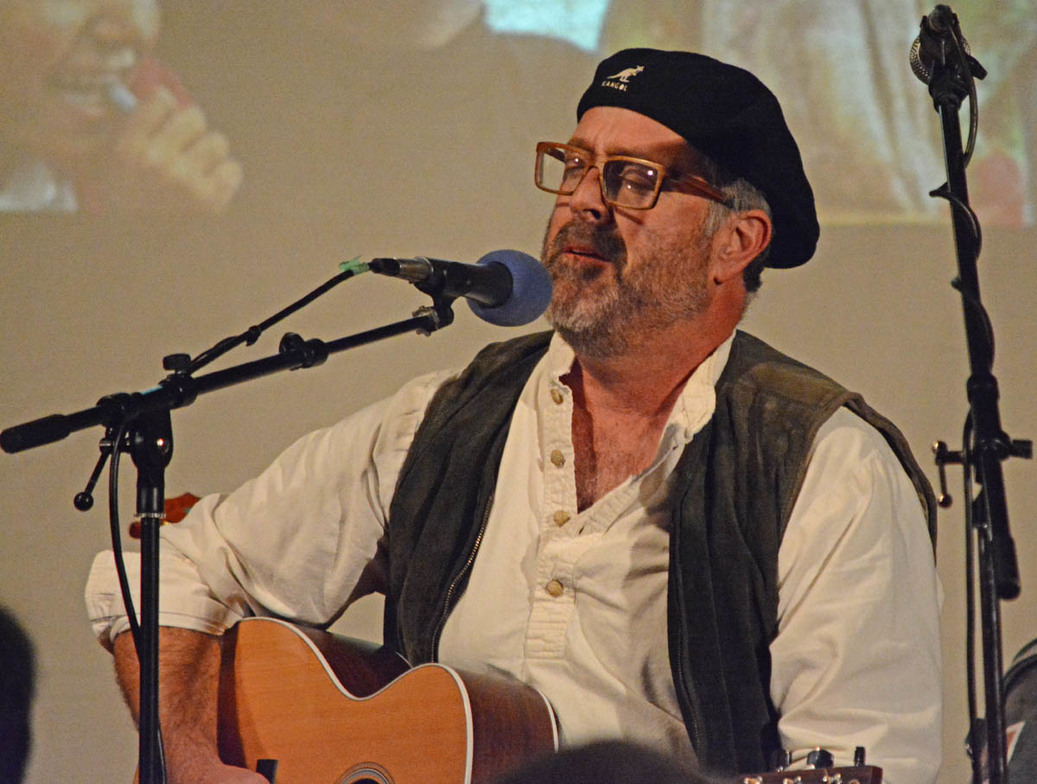 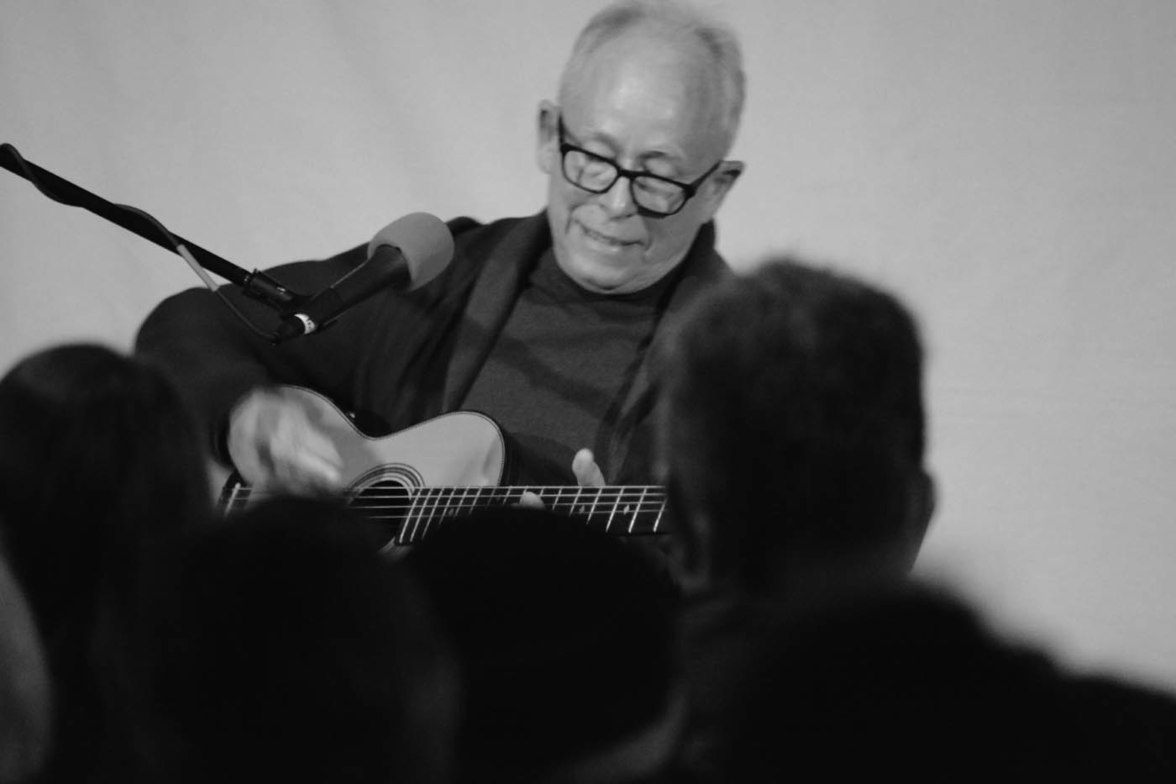 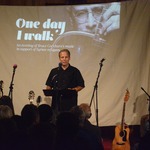 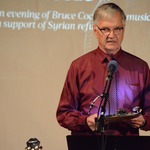 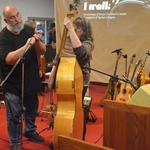 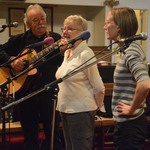 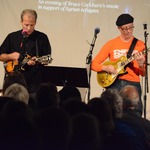 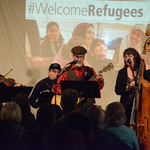 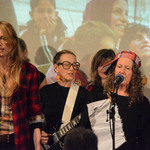 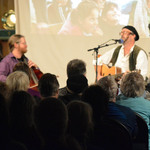 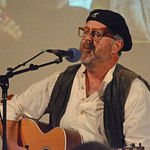 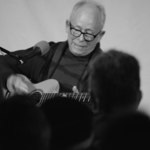 At 6:45pm on Sunday, November 12, 2017, the sanctuary of St. David and St. Paul Anglican Church on Sycamore Street in the old townsite section of Powell River, BC was filled to beyond capacity. The scheduled concert wasn't supposed to begin for more than half an hour and event organizers were bustling about with printer paper and Sharpies making Sold Out signs to attach to the church's exterior. More than 200 people filled every seat in the nave, chancel and even in the glassed in quiet room, with more standing against the windowed walls of the church's interior.

One Day I Walk was a tribute concert celebrating the music of Canadian artist, Bruce Cockburn, who recently released his 35th album, “Bone on Bone” and will soon be marking his 48th year in the music business.  The concert concept was the idea of the Reverend Ron Berezan, deacon at St. David and St. Paul. Ron, who at his day job is the owner of The Urban Farmer, a company that designs permaculture and other environmentally friendly, responsible and sustainable gardens is a singer, musician and a huge fan of Bruce Cockburn. Ron, with the support of his parish, his partner, Laura, his good friend from Victoria, John Reilly and local singer/guitarist/music producer Pat Buckna (and others) put together a first class event.

Ron’s entire life has been focused on the social justice messages of the gospels. This opportunity to do something that he loves;  honour the career of an admired artist,  and create an experience for the community that would not only delight and entertain but also raise much needed capital for the Kurdish/Syrian family that will be supported in their new lives in Powell River by members of the Parish of St. David and St. Paul was one that he entered into with energy and joy.

The concert was scheduled to begin between 7:20 and 7:30pm but with the huge turnout, Ron greeted the audience at about 7:10pm. He began by saying that this concert would be a fundraiser for “a family from across the world, offering them a safe haven and a new start” in Powell River. He spoke of how he was inspired to choose the music of Bruce Cockburn as the focus of the evening. Cockburn, in his music and in how he lives his life displays, “deep engagement and love for the world…Bruce urges us to be awake and to pay attention.” The messages in his music establish him as both “mystic and prophet.” To the uninitiated, Bruce Cockburn could be thought of as a folk artist, finger-picking or strumming an acoustic guitar while singing tunes over harmonically simple chord collations, however this is not entirely true, for Bruce Cockburn is a very good guitarist. Ron shared the oft repeated story of an interview with virtuoso guitarist Edward Van Halen who when asked by a reporter sometime in the 1980’s “how does it feel to be the best guitarist in the world?”replied, “I don’t know, you’ll have to ask Bruce Cockburn.”

After the greeting Ron introduced Lee Coulter, Outreach Chair of the Parish of St. David and St. Paul. In a direct and well organized address he gave some background on the history of refugee sponsorship in Powell River. “In response to the Syrian crisis of 2015, an umbrella group, Welcome Refugee Powell River, was formed and various churches began fundraising and working through their respective Sponsorship Agreement Holder (SAH) credentials . As a result, two Syrian families came to Powell River in 2016 with the support of the local Catholic and Evangelical/Baptist churches. Following a recommendation from the Outreach Committee, St D&P's Parish Council passed a motion in September 2015 to sponsor a refugee family. After various unsuccessful attempts to either partner locally or in the Lower Mainland, an application was made in December 2016 through the Diocese of New Westminster as an SAH to sponsor Mezgin's family.  Special thanks goes to our Diocese's Dr. Shakuntala Soden and Shannon Muir, and to MOSAIC's, Mustafa Ahmad.  He then read a note from Mezgin who is the principal applicant and the wife and mother of the Kurdish/Syrian family originally from the city of Quamishi  (which shares the Turkish border with Nusaybin) destined to spend the next chapter of their lives as residents of Powell River.  In that note she gave some recent history, paraphrased here in point form by Lee Coulter:

- following increasing ISIS and sectarian fighting in the Qamishli area, fearing for their security, in February 2015, the family fled east to Iraq and settled in Erbil, the capital of the semi-autonomous area of Kurdistan where they applied for and received UNHCR refugee status and became part of the 5+ million Syrians who have fled their country and part of the 1/4 million Syrians now living in Iraq.

- they are now caught up in the increasing tension between the Kurdistan and Iraqi governments, the former having conducted an overwhelmingly successful independence vote in September of this year. In retaliation the Iraqi government has closed the Erbil airport to all international flights. (The usual route for Mezgin and her family would have been from Erbil to Istanbul to Toronto to Vancouver and on to Powell River). For Kurds, flying out via Baghdad it is very dangerous and probably not allowed.

- because of the Kurdish/Iraqi tension, the Canadian delegation in Amman Jordan is having difficulty making contact with Mezgin and family to complete the final health and security checks before issuing their flight tickets.

This challening information, however, did not dampen the enthusiasm of the audience and the artists who performed. The concert raised $3,400 for the soon to be arriving family.

The concert was divided up into two 40-50 minute sets with a half hour break for goodies and hot drinks downstairs in the church hall. A portion of the sweets were prepared by members of the two Syrian newcomer families now living in Powell River. Everything flowed perfectly from the opening numbers through to the finale which featured every participant on stage leading the audience in a community sing rendition of "Wondering Where the Lions Are".