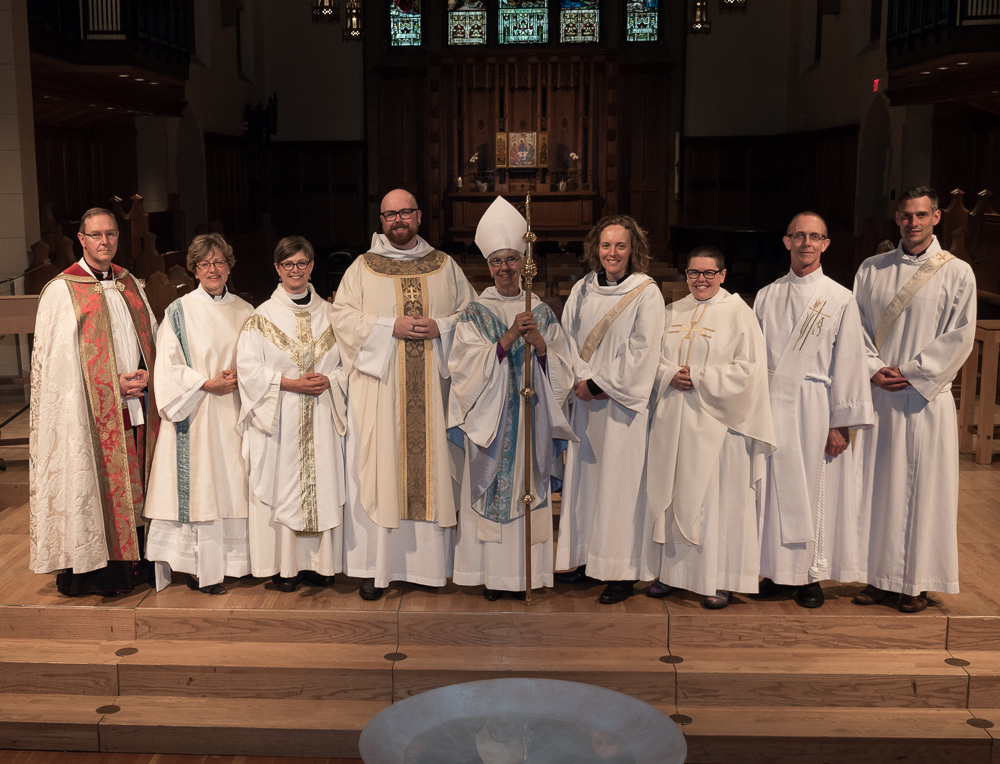 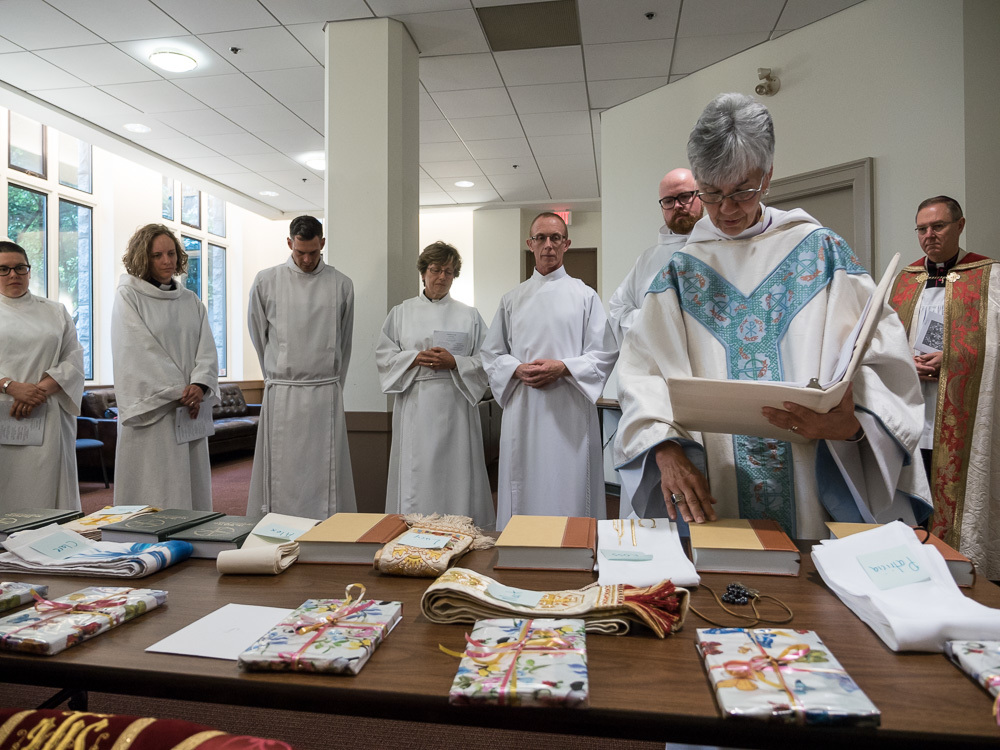 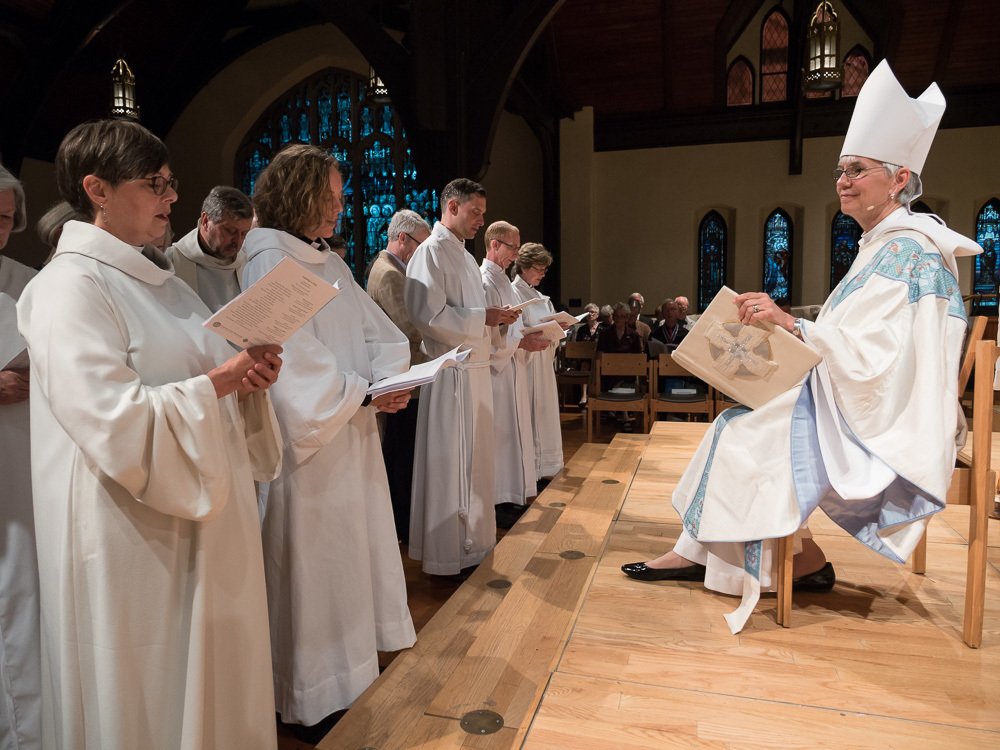 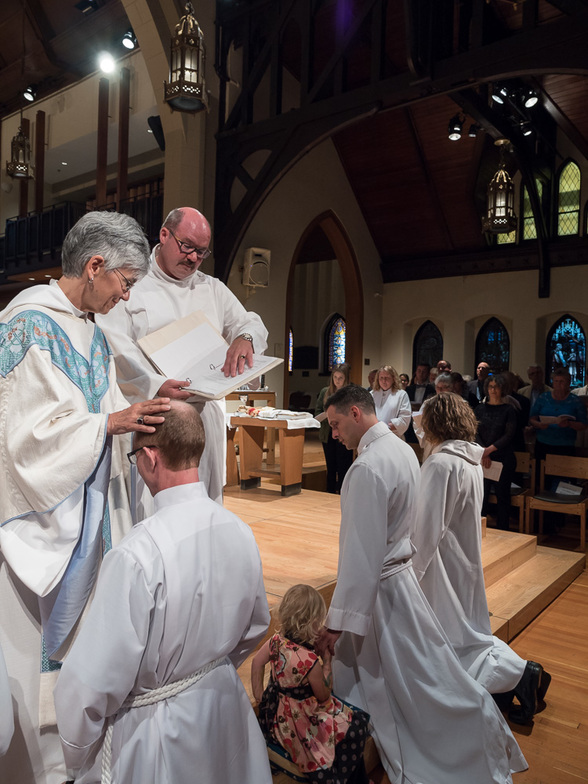 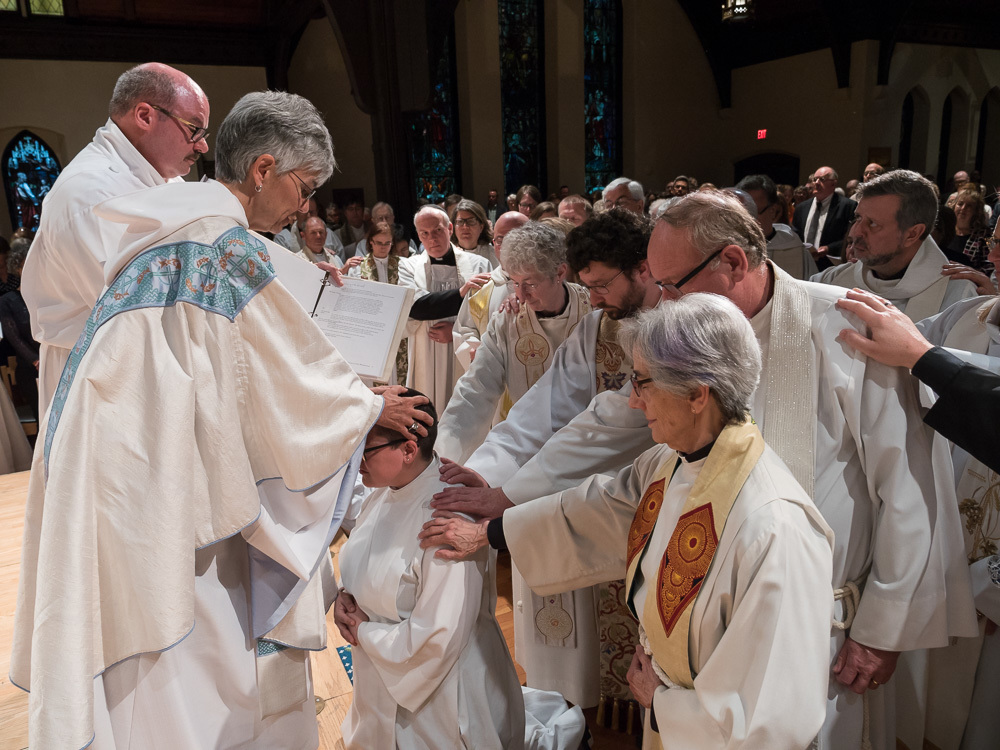 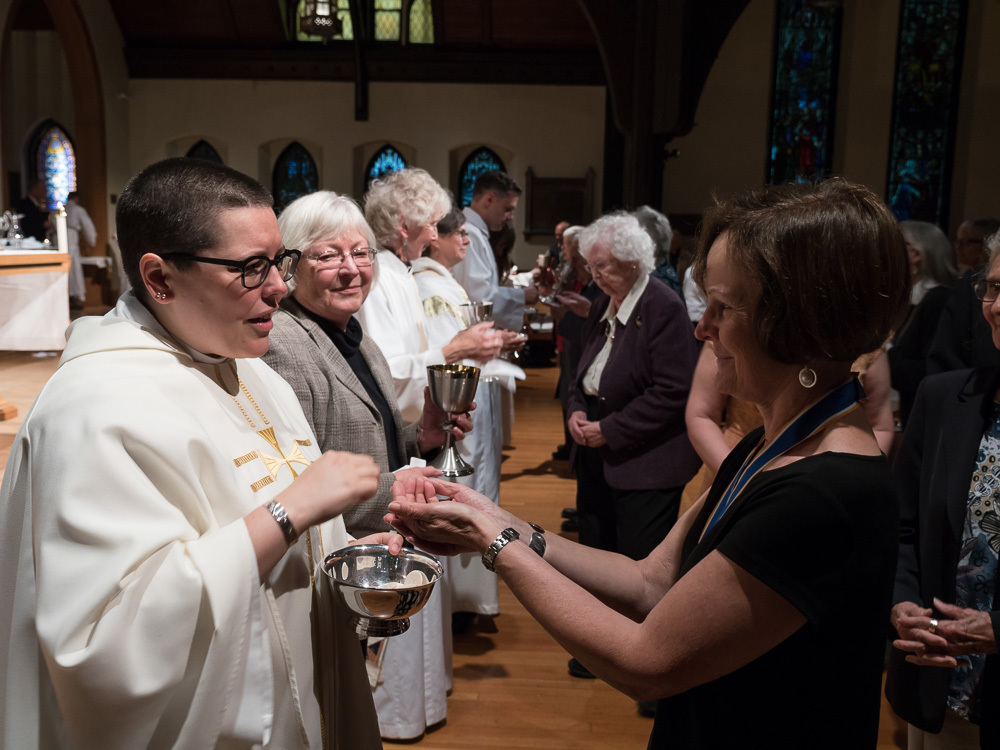 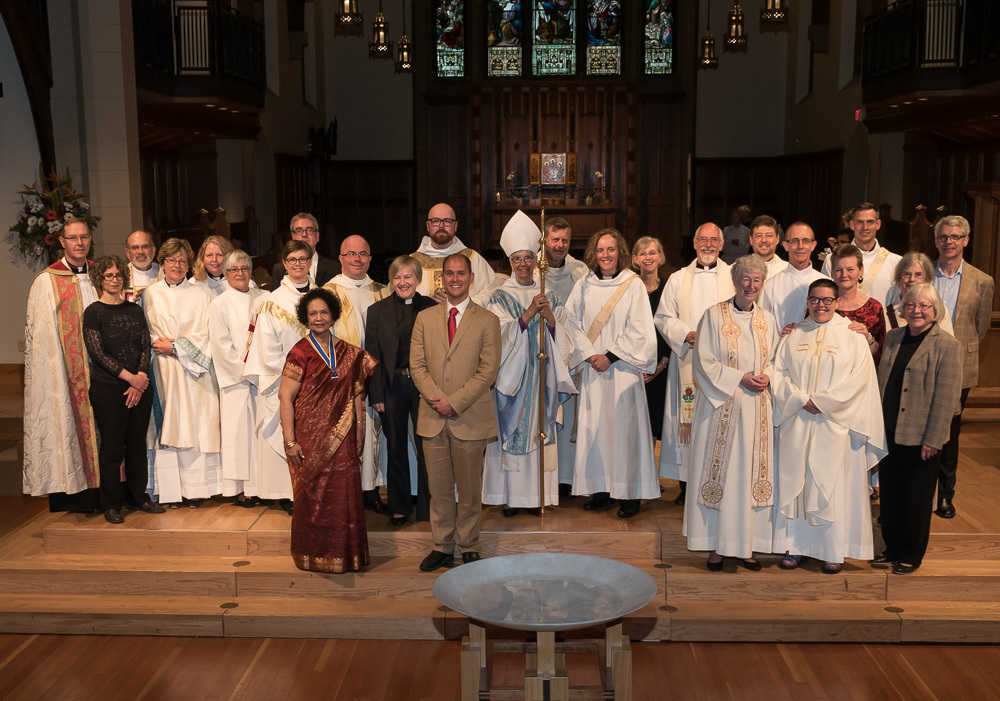 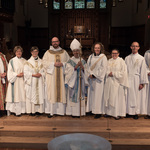 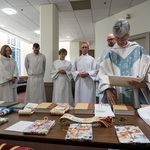 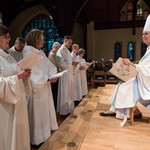 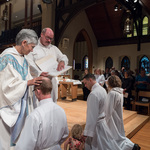 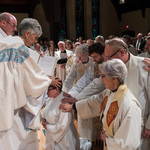 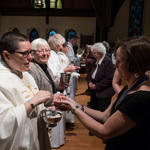 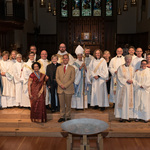 Ordinations on the Feast of the Nativity of John the Baptist

A total of seven were ordained, which is the largest number in recent memory. And notably, the ordinations to the priesthood were the first of Bishop Melissa Skelton’s 28 month episcopacy.

The inside front cover notes in the service bulletin prepared by Christ Church Cathedral presented a summary of the liturgy not just in its scope and content but also of its theological foundations including this following excerpt from the Book of Alternative Services (BAS). “The Holy Scriptures and ancient Christian writers make it clear that from the apostles’ time there have been different ministries within the Church. In particular, since the time of the New Testament, three distinct orders of ordained ministers have been characteristic of Christ’s holy catholic church.  First, there is the order of bishops who carry on the apostolic work of leading, supervising, and uniting the Church. Secondly, associated with them are presbyters, or ordained elders, in subsequent times generally known as priests. Together with the bishops, they take part in the governance of the Church, in the carrying out of its missionary and pastoral work, and in the preaching the word of God and the administration of the holy sacraments. Thirdly, there are deacons who, in addition to assisting bishops and priests in all this work, have a special responsibility to minister in Christ’s name to the poor, the sick, the suffering and the helpless.”

The service bulletin notes went on to include the following: “Baptism is the foundation of all ministries. At this ordination you will witness many signs and symbols and hear many words about the ministries of deacons and priests. The purpose of all ordained ministry is God’s mission to the world, which is exercised by the whole people of God so that all might know of the grace and love of God we have received in Jesus Christ our Lord.”

In his opening address of welcome, Dean Peter Elliott informed those gathered that the Bishop had transferred the June 24 Feast of the Nativity of St. John the Baptist to June 18 in order that those ordained at this liturgy would celebrate the anniversary of their ordinations on a feast day. This feast day also has a deep connection to our country of Canada. He also let the congregation know that their financial gifts received during the offertory would be directed to Primates World Relief and Development Fund (PWRDF) relief to the victims of the May fires in Fort McMurray.

The music led by Christ Church Cathedral’s director of music and organist Rupert Lang was geared toward congregational singing which was made evident in the choice of the Opening Hymn, “For All the Saints.” Some of the music in worship led by Cathedral Choir included, the Peter Hallock setting of Psalm 85 and Bobby McFerrin’s paraphrase of the 23rd Psalm as the Fraction Anthem which were both sublime.

In the sermon, Bishop Skelton began by summarizing the interwoven birth narratives of John and Jesus in the first chapter of Luke and the miraculous nature of those events. Bishop Skelton presented the concept that perhaps the Angel Gabriel expected more from the senior priest Zaccaria than from the “young peasant woman”, Mary, as Zaccaria was rewarded with nine months of being mute for his doubt and Mary was given an explanation concerning her selection by God to give birth to the Messiah.  Bishop Skelton’s intention was not to “scold” Zaccaria and point out his faults “but to see in the story of Zaccaria the priest, a cycle of experience that those about to be ordained are likely to encounter in their ordained life.” Drawing on the work of theologian Alyce McKenzie, Bishop Skelton went on to explain that this “cycle of experience has three movements”:

What are doubts drive us into through prayer is a new trust that “the God we worship and adore is faithful, is active…is alive!” An audio of Bishop Skelton’s sermon is available here.

The remainder of the ordination progressed through the various stages and peaked with the presentation by Bishop Skelton of the newly ordained to the community, followed by the exchange of the Peace of Christ and the Eucharist, with each ordinand administering the Body of Christ.  One of the most memorable moments during the sacrament of ordination was during the Examination of the ordinands by the bishop, Naomi, Mark Munn’s two year old daughter decided that she would come up to the chancel steps and be with her dad. This included rearranging the kneeler. It was a great moment.

There are more than 100 of Bayne Stanley's excellent photos posted on Anglican Conversation - the Facebook page of the Diocese of New Westminster. Click the link to access.