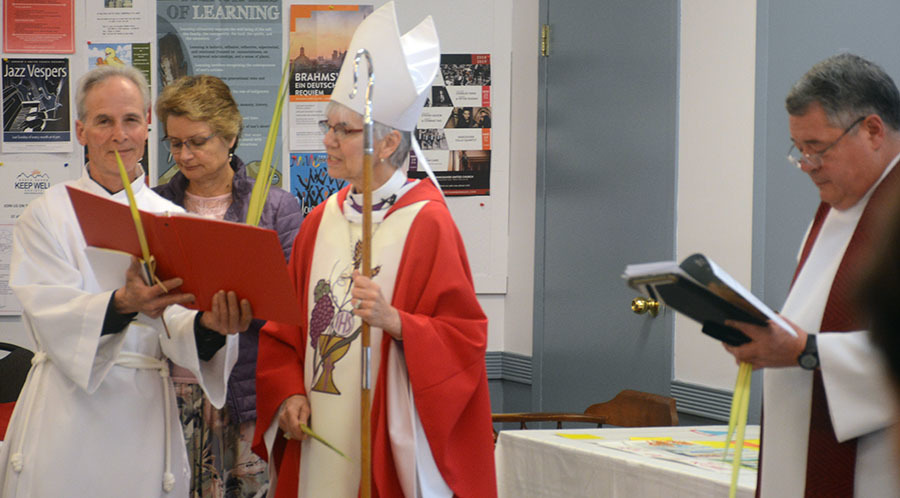 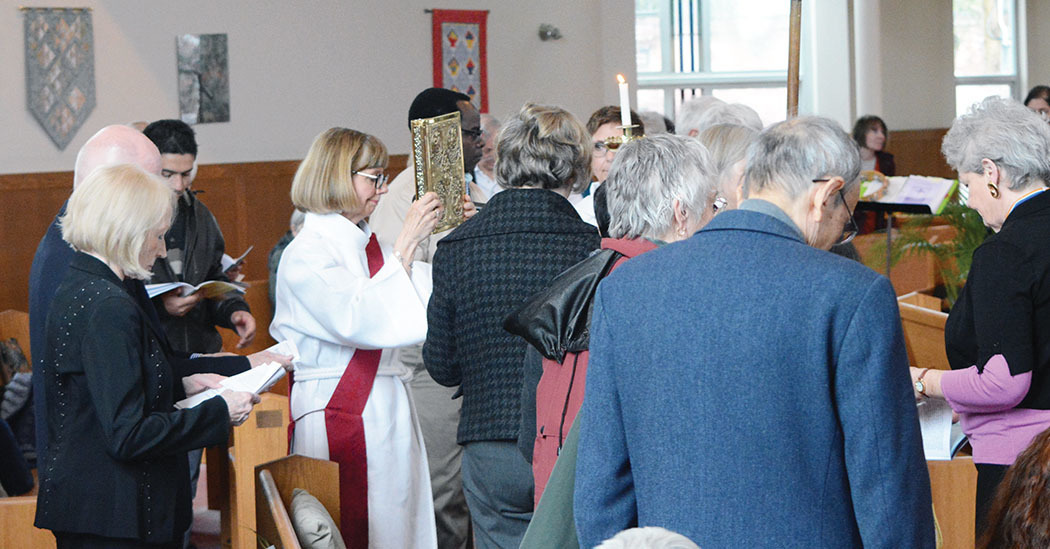 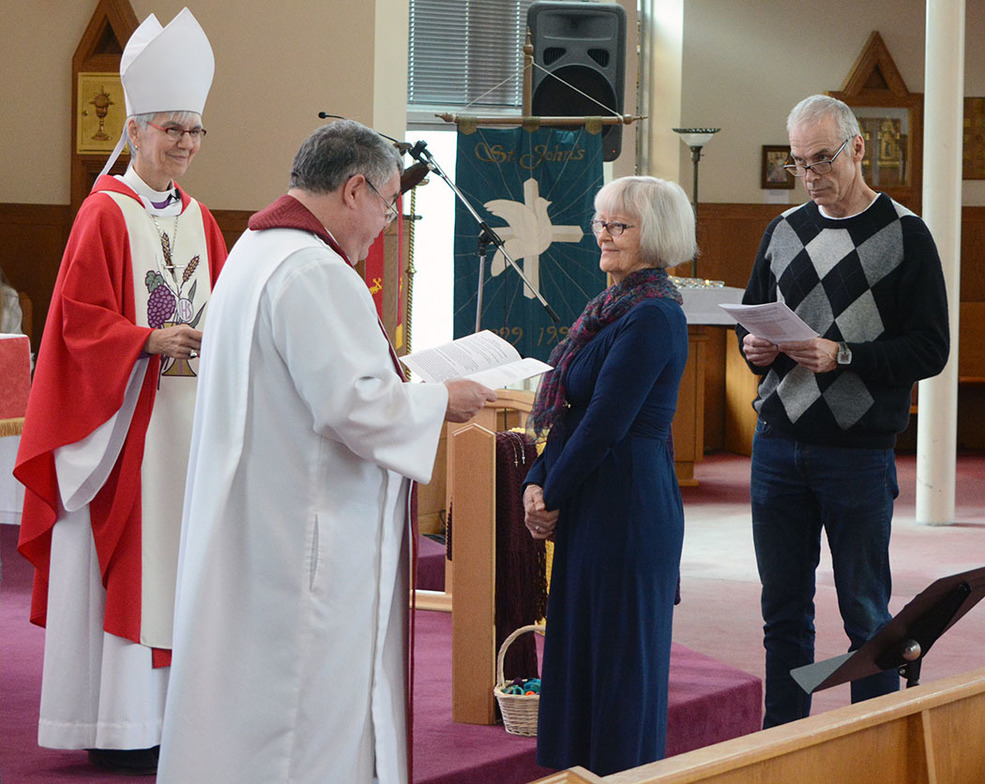 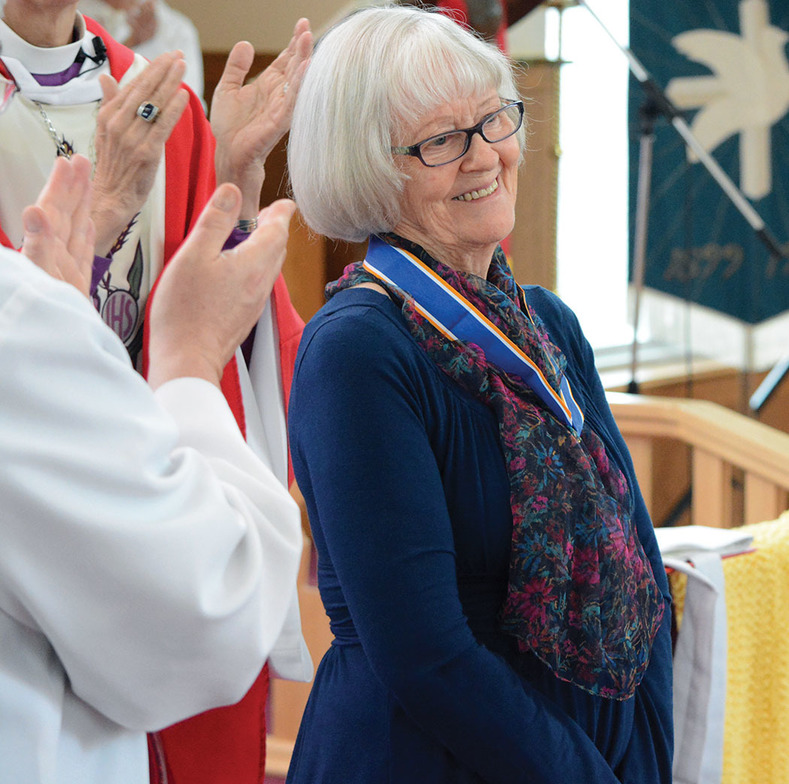 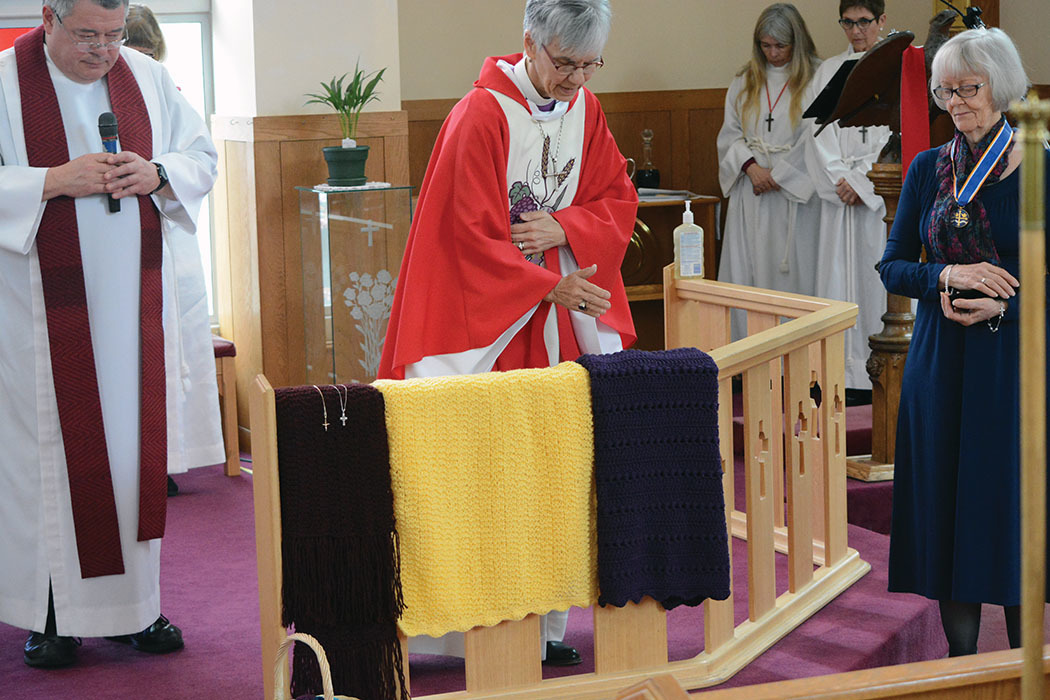 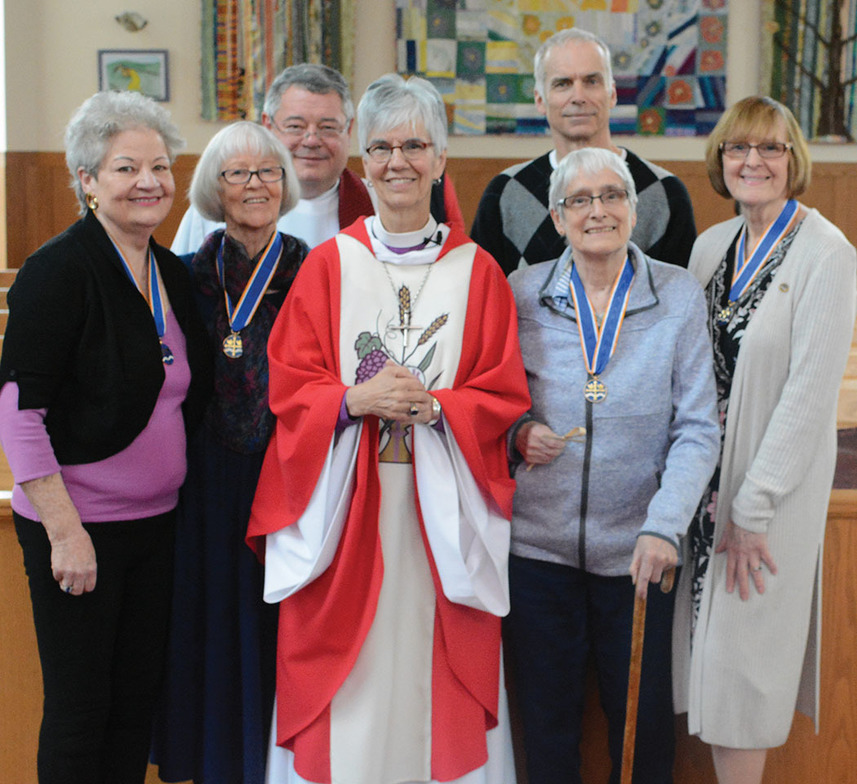 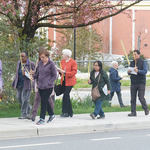 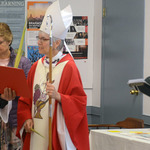 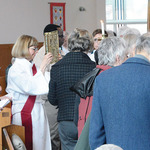 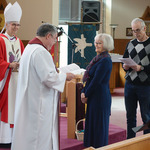 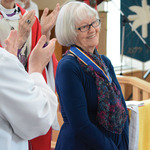 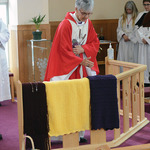 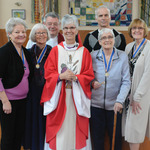 On Sunday, April 14, 2019, Palm Sunday, the first day of Holy Week, the Most Reverend Melissa Skelton made a scheduled archiepiscopal visit to St. John the Evangelist, North Vancouver to Celebrate the Eucharist, preach, bless some hand knitted prayer shawls and prayer holders and invest Ms. Madeline May Cooper into The Order of the Diocese of New Westminster.

Worship began with the Liturgy of the Palms in the lounge which is located right behind the church’s main entrance doors on West 8th Street. At the conclusion of the liturgy, crucifer and server, Hazel Breakey led choir, clergy and congregation out onto 8th street heading west for about 25 metres before following the gentle curve of the southside sidewalk to continue east on 13th Avenue towards and subsequently through the doors to the narthex, nave and sanctuary. The music in procession was led by the choir, with choir director, Christie Smith following behind the crucifer. Christie kept a steady rhythm on a drum as all sang “Into Jerusalem Jesus Rode.”

The Palm Sunday Eucharist included the reading of the Passion of Our Lord from Luke’s Gospel, Luke 22: 14-23: 56. The Gospel passage was read in its entirety by deacon, the Reverend Juanita Clark. The reading was followed by Archbishop’s Skelton’s homily.

Near the conclusion of her homily, Archbishop Skelton spoke about how we can see ourselves in relationship to Jesus’ arrival in Jerusalem and that first Palm Sunday procession as that significant Bible event connects to passive but committed resistance to injustice:

“…it is that we see ourselves in who Jesus is and what Jesus does, particularly in those moments when all those chemical responses in us want to tell us to fight or to flee. The way our minds tell us that it is legitimate either to get aggressive or to disappear from a difficult conversation. It’s important that we neither fight nor flee but take one deep breath and chose to lower our voice but not to avert our gaze, but not to avert our gaze, to stand our ground without running over somebody else.”

Following the sermon, the Eucharist continued through the Confession and Absolution which led into the Presentation of the Order of New Westminster. Ms. Madeline May Cooper had been unable to attend the Investiture event in November of 2018. She was not alone there four others who were not present, however, Ms. Cooper was the final nominee of the Class of 2018 to be invested.

Madeline consistently demonstrates caring and compassion while being guided by the principles of her dedicated contemplative prayer practice.  Madeline’s 30 year ministry at St John’s includes Altar Guild, counter, Treasurer of the Women of St John, nursery, seniors’ luncheons, and initiating and leading the Prayer Shawl ministry.  She is especially recognized for her leadership and devoted service in Caring Ministry, administering communion and assisting elderly parishioners in life changing transitions.  Madeline’s caring ministry gives significant value to people’s lives and to the parish.

The investiture was a joyful interlude which was followed by Archbishop Skelton blessing prayer shawls and prayer pouches, these items prepared by hand to the Glory of God are a significant part of Madeline Cooper’s ministry. Prior to “the peace” the Reverend Juanita Clark presented Archbishop Skelton with a gift from the parish in recognition of her ministry.

The worship continued with the Eucharist, music in worship led by the choir, the Archbishop’s Blessing, the Closing Hymn, “All Glory Laud and Honour”, and the Dismissal. Following worship there was a potluck lunch in the Lounge and an enthusiastic Q&A session with Archbishop Skelton.

VIDEO: "May the Peace of Christ always be with you."