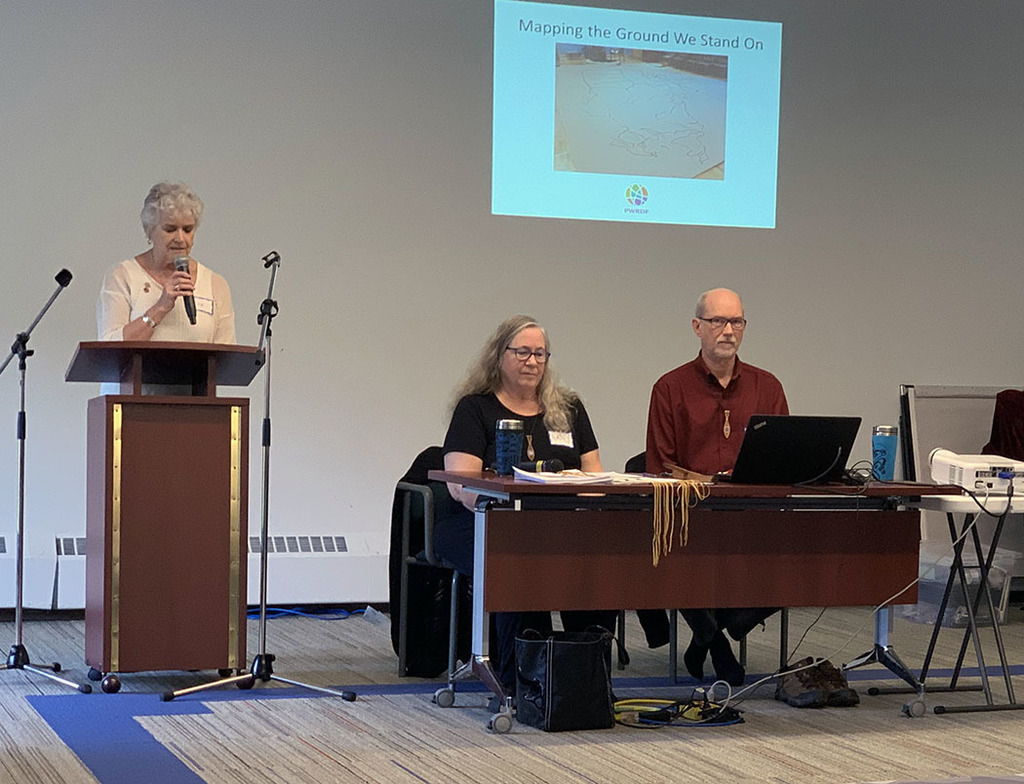 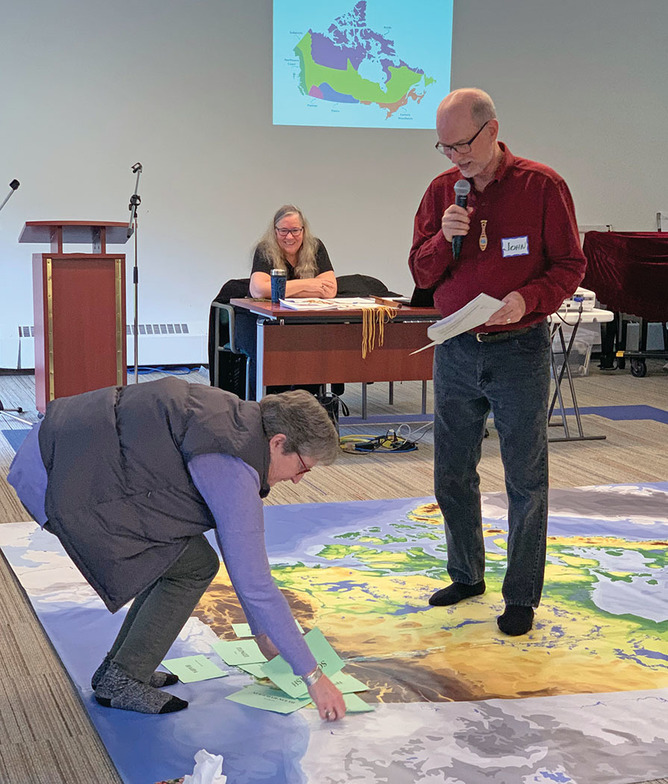 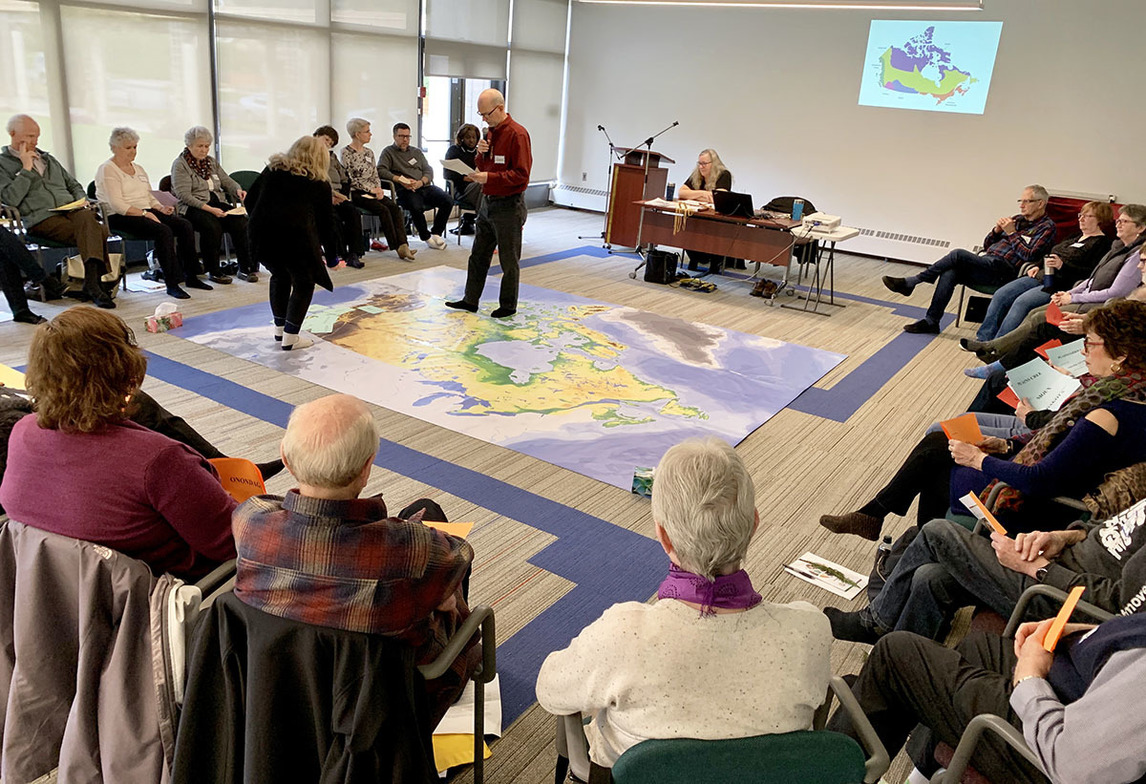 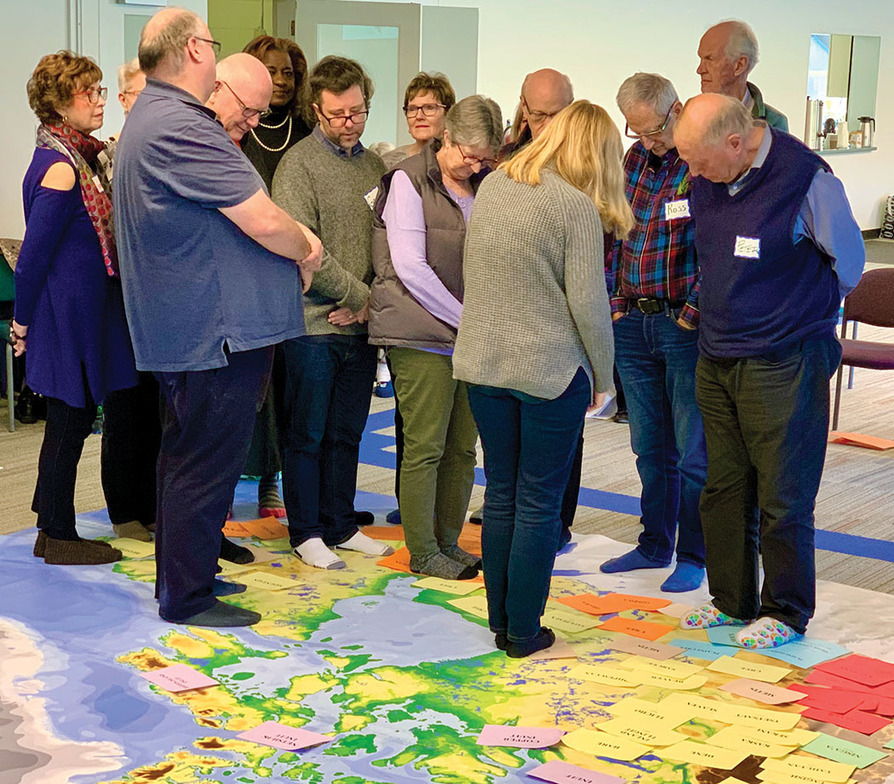 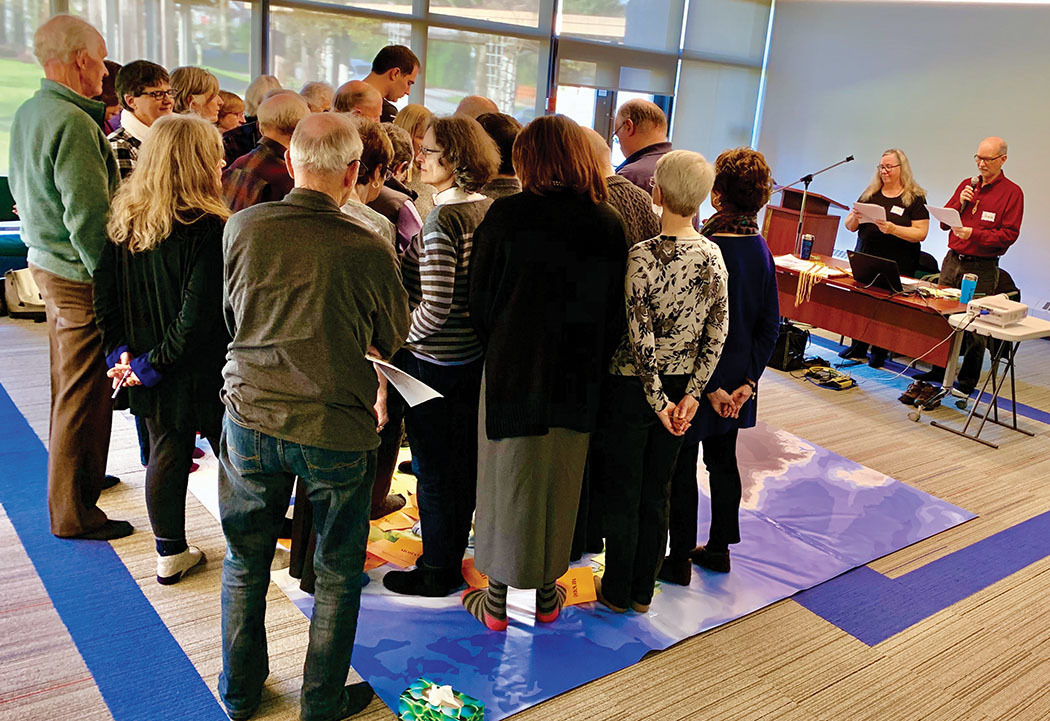 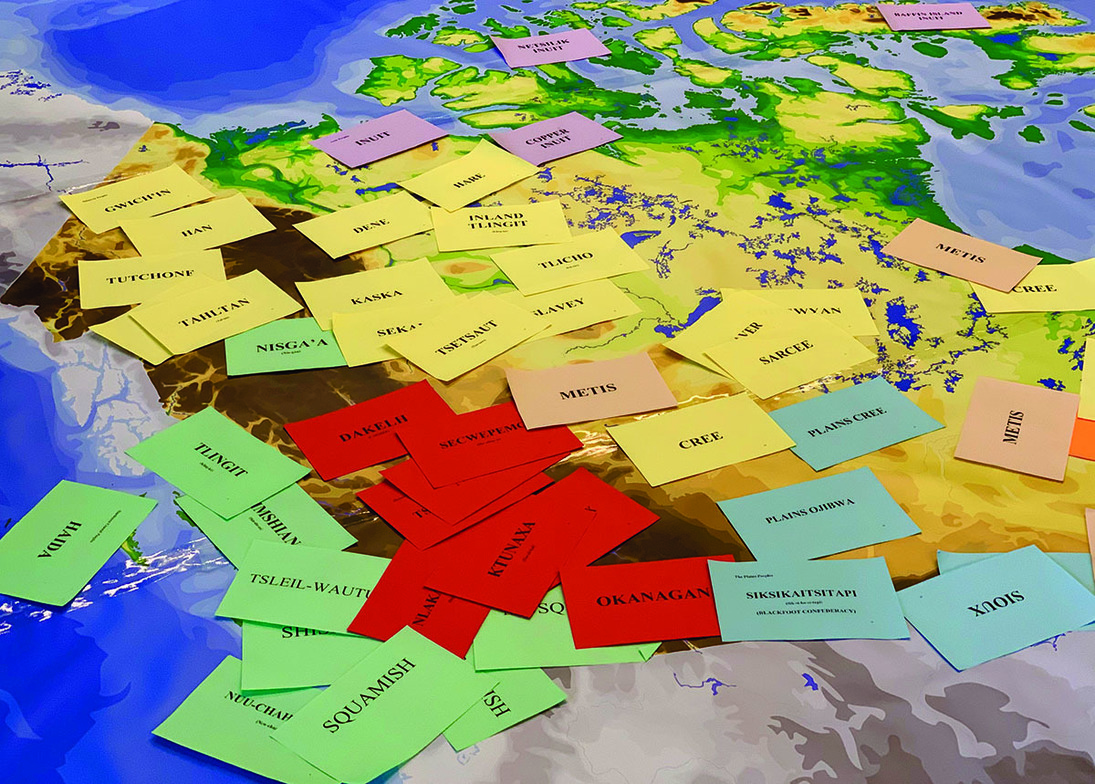 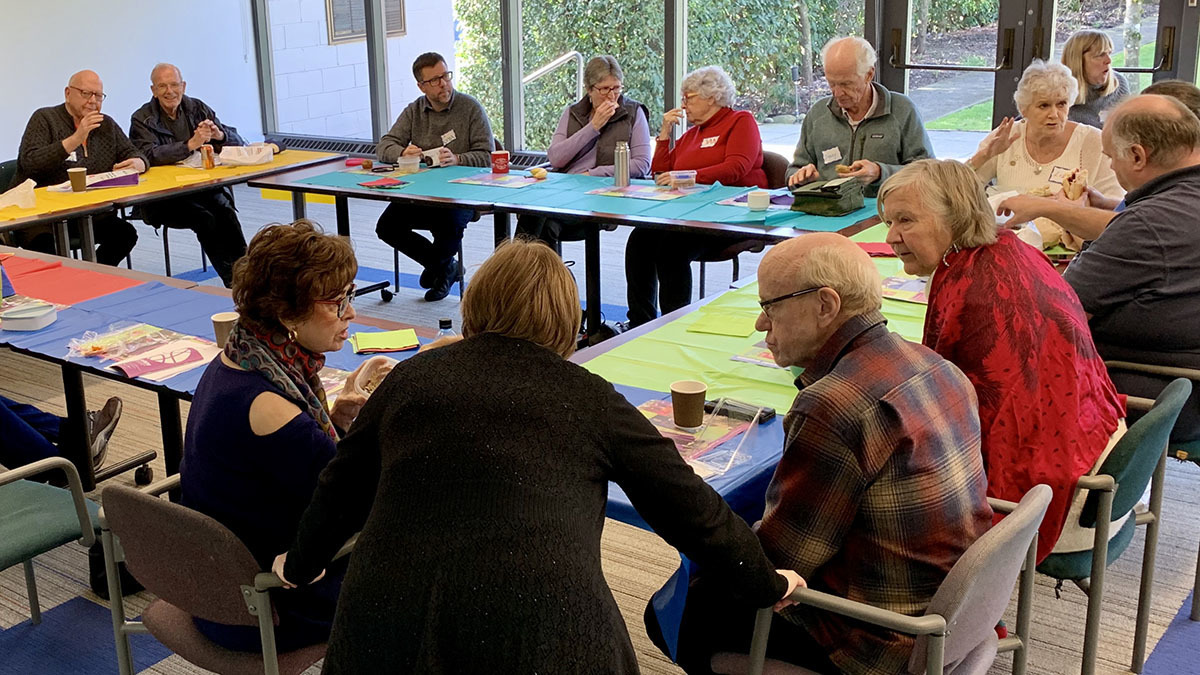 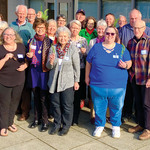 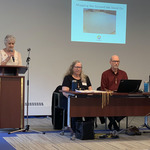 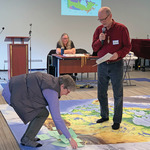 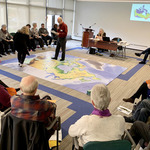 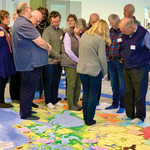 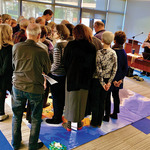 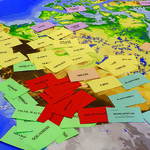 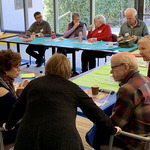 On Saturday, February 1, 2020, thirty-three people gathered in the Trendell Lounge, the space shared by the Synod Offices of the Diocese of New Westminster and the Parish of St. John’s, Shaughnessy to participate in the PWRDF educational initiative, “Mapping the Ground We Stand On: A Reconciliation Workshop." The workshop was facilitated by John and Nancy Denham, parishioners at St. Hilda's in Sechelt and well-known Indigenous Justice advocates.

PWRDF Diocesan Unit member, Liz Macdonald of All Saints’, Ladner offered words of welcome and thanks to the Denham's, as well as to her co-organizers of the day, Deirdre Thornton of St. Alban's in Burnaby and Janet Coghlan of St. John the Divine, Maple Ridge. Roughly twenty parishes within the diocese were represented at this workshop. Seven clergy were in attendance including: the Reverend David Price (Priest in Charge, All Saints’, Agassiz), the Reverend Greg Jenkins (Rector, St. Alban's, Burnaby), Deacon, the Reverend Eileen Nurse (St. George's, Fort Langley), The Reverend  Dudley Ritchie (Retired Clergy), the Reverend Christine Rowe (Associate Priest, St. Mary's, Kerrisdale), the Reverend Margaret Marquardt (Chair of the Diocesan Eco-Justice Unit, and Christ Church Cathedral parishioner) and the Reverend Miranda Sutherland (Vicar, Holy Spirit, Whonnock)

Participants were seated in chairs around a large floor map of the northern part of Turtle Island, the area that we call Canada. Facilitators, John and Nancy Denham stated that,

“standing on a map can help us understand our personal histories, our collective social, economic and political histories, where we have come from and where we are in relationships with one another.”

Everyone was given a cedar branch. Cedar is sacred for the Coast Salish peoples. Those gathered were asked to remove their shoes and to “prepare to step lightly on the Earth." Forty seconds of silence were observed to mark one second for each millennium that this land was inhabited before most of our ancestors set foot on it. On each participant’s chair were sheets of paper containing sets of names of First Nation, Inuit and Mètis peoples. One by one, people introduced themselves, their places of birth, noted what traditional territory they now live on, then placed the sheets given to them on the map with the guidance of the workshop facilitators. As Peter Goodwin, ODNW of St James’ observed, “standing on the map emphasizes the richness of the First Nations culture.”

Throughout the morning session, participants walked the map in response to the different teaching exercises, paused for prayer and reflections, and learned of and discussed the 15th Century Terra Nullius (Empty Land) and the Doctrine of Discovery, which stated that Indigenous peoples throughout the world and on this continent were considered non-existent. The theory was that since Indigenous peoples were not Christians, they were not really human, and therefore the land was considered uninhabited. This part of the exercise proved to be eye-opening and emotional for those in attendance.

Some comments made were:

“I am totally overwhelmed by the complexity, the vast numbers, and the issues” (Rev. Dudley Ritchie),

“If only we could harness the same compassion now to new immigrants” (Liz Macdonald),

“Seeing the map, the first thing that comes to mind is no wonder there are land claim issues” (Deirdre Thornton),

“The metaphor of stepping on land, but with no pause for the respect of the land and its Chiefs” (Rev. Miranda Sutherland)

Those in attendance then embarked on the next stage of the day, a working lunch and table discussions. The discussions resulted in reporting back with some fresh ideas for PWRDF initiatives and program involvement in our diocese.

For more information on this Mapping Exercise and other PWRDF initiatives, please go to www.pwrdf.org