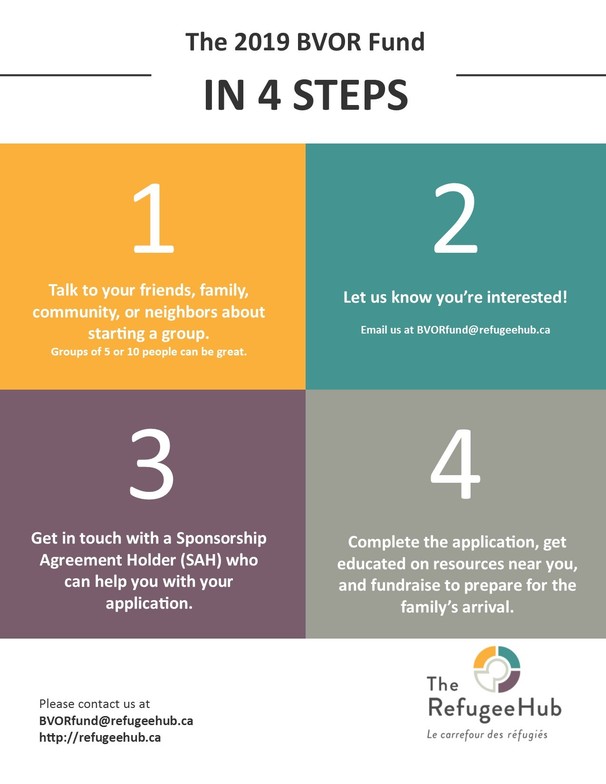 The Canadian Blended Visa Officer Referral (BVOR) refugee sponsorship program is a uniquely Canadian program that enables citizens and permanent residents to directly engage in refugee resettlement efforts. Individuals can form groups to become sponsors who commit to providing financial, emotional, and resettlement support to help newly-arrived refugees integrate into life in a new country.
The BVOR program resettles refugees identified by UNHCR and submitted to Canadian visa offices; refugees have already met eligibility and admissibility criteria but must be matched with a sponsor before they can travel to Canada. This sponsorship model is one that connects strangers with one another.
In 2019, Canada has approved the resettlement of 1650 refugees from abroad through the BVOR program. All of these individuals receive full background checks and can arrive in Canada 2-4 months after matching with a sponsorship group. Upon arrival, the Canadian government pays for 50% of their settlement costs.
If we don’t use all of Canada’s BVOR spaces, we lose that spot in Canada’s annual resettlement target and the number of refugees brought to safety around the world drops. Over the past two years, the number refugees resettled worldwide decreased significantly while at the same time the number of people in urgent need of a safe place to call home grows daily.
These refugees in need of protection can’t come unless Canadians step up to provide practical support and the remaining settlement funds for the first year of their life in Canada.

In 2018, the Refugee Hub and Jewish Family Services – in partnership with founding donors the Shapiro Foundation and the Giustra Foundation in Vancouver – launched a unique, time-limited fund to support the sponsorship of hundreds of refugees identified by the UNHCR.
The fund was created August 7, 2018 to encourage participation in sponsorship and ensure no spots in the BVOR program remained unused. The Canadian government offered 1,500 spaces in 2018 through the BVOR program and as of August there were over 1,000 spots still unclaimed. Unused sponsors would have disappeared at year’s end without the quick action of the groups and people involved.
The UNCHR, the Refugee Sponsorship training Program, over 35 Sponsorship Agreement Holders, and many community organizations across Canada were also integral partners in this rapid mobilization.
The fund mobilized hundreds of Canadians across the country. From large centers such as
Vancouver, B.C., to small towns like Antigonish, N.S., Canadians came forward to sponsor, ready
and eager to volunteer their time support newcomers for their first year in Canada after
generous donations we made possible by the fund.

After the success of the 2018 BVOR Fund, the Refugee Hub, the Shapiro Foundation, G. Barrie
Landry, and the Jewish Foundation of Greater Toronto are relaunching the 2019 BVOR Fund.
This fund is a time-bound funding source that will cover the sponsor’s portion of the BVOR
sponsorship costs. Groups will be responsible for securing funding or in-kind donations to cover
start-up costs such as clothing and furniture.
Sponsors can apply for the funds between May 2nd and August 31st or until the fund is
exhausted prior to the deadline.

Who is paying for this fund?

The 2019 BVOR Fund is housed at Toronto Jewish Foundation and administered by the Refugee
Hub. Generous seed contributions have been made by the Shapiro Foundation and G. Barrie
Landry.
The fund also welcomes donations from Canadians and international individuals and groups who would like to participate in the resettlement of refugees through the BVOR program. Should you contribute the full amount needed to sponsor a family to the fund, you can choose to be matched to the sponsor group that receives your donated funds to learn more about the sponsoring group that is able to sponsor through your generosity.
Please note, only US and Canadian donors can be issued with a tax receipt for their donation.

What does the BVOR Fund cover?

Traditionally, the BVOR program is cost-shared between the government and sponsoring group.
Sponsoring groups are responsible for providing 6 months of income support, in addition to the
start-up costs such as furniture.
Sponsors will now be able to apply to the BVOR Fund to have the sponsor-side settlement costs
subsidized (the start-up costs must still be raised by the sponsor group and can include in-kind
donations).

In addition, in 2019, Sponsorship Agreement Holders can apply to the fund for a BVOR
administrative fee of $5000 per BVOR case submitted up to a maximum of $50,000.

Who is eligible to apply to this fund?

Any Canadian sponsoring group that is working with a Sponsorship Agreement Holder (SAH)
and who will submit an application to sponsor an individual or family through the BVOR
program between May 2nd, 2019 and August 31st, 2019.

Note: Refugees on the BVOR list are UNHCR referred and cannot be ‘named’ by individuals in Canada.

How can sponsor groups apply to the fund?

To be eligible for the fund, interested groups are encouraged to submit a brief expression of
interest (EOI) to BVORfund@refugeehub.ca as soon as possible or at least one week before
submitting their BVOR sponsorship application to Immigration, Refugees, and Citizenship
Canada (IRCC).

This EOI can come to us in a simple email with subject line ‘Expression of Interest’ and should
include:

a. Confirmation of intention to submit a BVOR sponsorship application and desire
to access the BVOR Fund as part of their application;
b. If the sponsoring group is already working with a Sponsorship Agreement Holder
(SAH), or which SAH they are working with;
c. Approximately how much funding they will require from the fund based on
intended family size of the refugee family following the BVOR cost-table; and
d. Number of people involved in their sponsoring group; contact information for
their group.

Upon receipt and approval of the application and invoice, the Refugee Hub will issue a Letter of
Guarantee to the SAH or the Constituent Group with charitable status, outlining the amount of
funds confirmed for the sponsoring group and procedure for the transfer of the funds. Sponsor
Groups must notify the Refugee Hub if they are approved or rejected by the IRCC. The funds
will only be transferred once the sponsoring group has received the Notice of Arrival
Transmission (NAT) for the family that they have sponsored through BVOR.

When will the funds arrive?

SAHs will submit the BVOR sponsorship application to Immigration, Refugees, and Citizenship
Canada (IRCC). If the application is approved by IRCC, then a proof the NAT is to be sent to the
Refugee Hub by emailing BVORfund@refugeehub.ca
The funds will be transferred to the SAH or the Constituent Group within two-three weeks of
the receipt of the NAT. The SAH or the Constituent Group will then hold the funds in trust until
the refugee family’s arrival and will disburse to the refugees over the year of their settlement,
depending on each SAH’s unique procedures.

Can I ask for more money if the family grows over the year?

The BVOR fund will only transfer the amount of money that is requested on the application and
reproduced on the Letter of Guarantee. The fund will close on August 31st. If the family has a
baby during the year of sponsorship, the Constituent Group will be responsible for fundraising
the amount required to support the additional family member.
In addition – the fund is not responsible for raising the amount of money necessary for any
additional non-accompanying family members who were included on the refugee application
and who are eligible to be sponsored under the one-year window.

How can SAHs apply to the fund?

In addition, qualifying Sponsorship Agreement Holders (SAHs) will, for the first time, be able to
apply for funds to help with the administrative costs associated with supporting increased
BVOR sponsorships (National SAHs can contact the BVOR Fund to discuss funding opportunities)
To be eligible for the fund, interested SAHs are encouraged to submit a brief expression of
interest (EOI) to BVORfund@refugeehub.ca once a BVOR application that has submitted an
application for the BVOR fund has been submitted to IRCC.

This EOI can come to us in a simple email with subject line ‘Expression of Interest’ and should
include:

a. Confirmation of date of application of BVOR funded case.
b. Which group the SAH is working with.

Upon receipt of the letter of interest, the Refugee Hub will issue an application form and a
blank invoice. The SAH must have charitable status to receive this funding.

The SAH will then submit the application to the BVOR Fund at BVORfund@refugeehub.ca.

Upon receipt and approval of the application, the Refugee Hub will issue a Letter of
Guarantee outlining the amount of funds confirmed for the sponsoring group and procedure
for the transfer of the funds. The funds will only be transferred once the Notice of Arrival
Transmission (NAT) has been received by the Refugee Hub.

When will the funds arrive?

The funds will be transferred to the SAH within two weeks of confirmation of the arrival of the
BVOR funded sponsored individual or family.