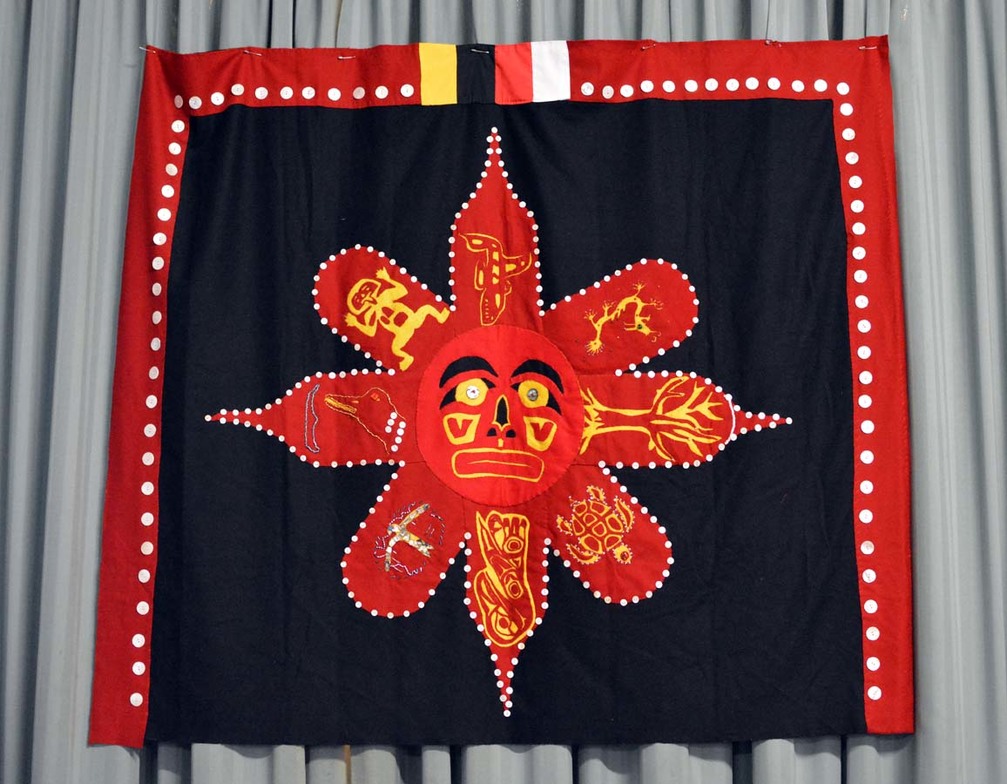 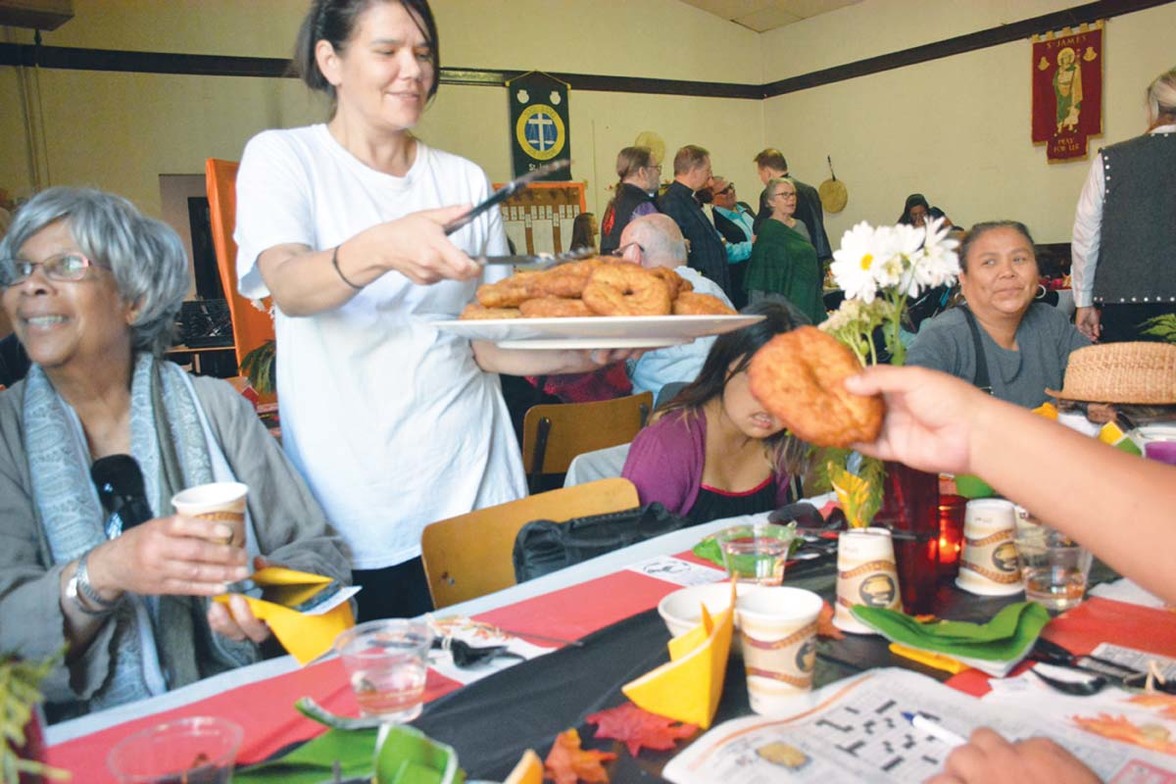 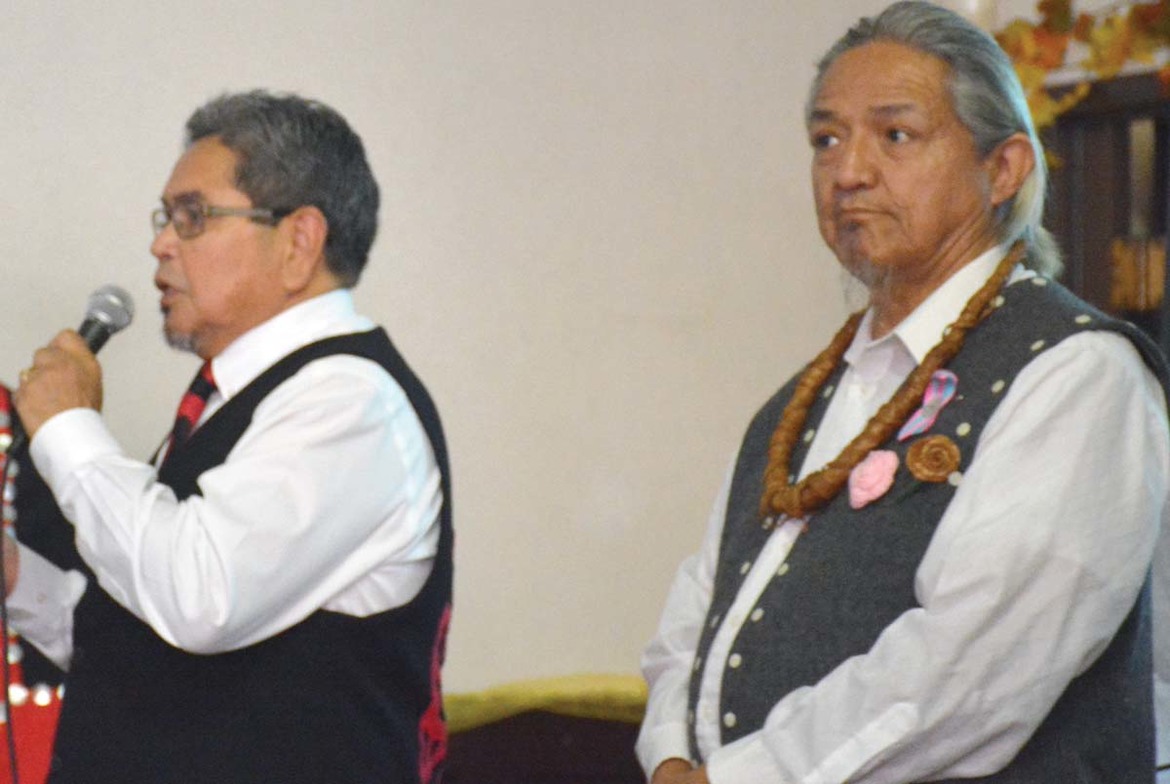 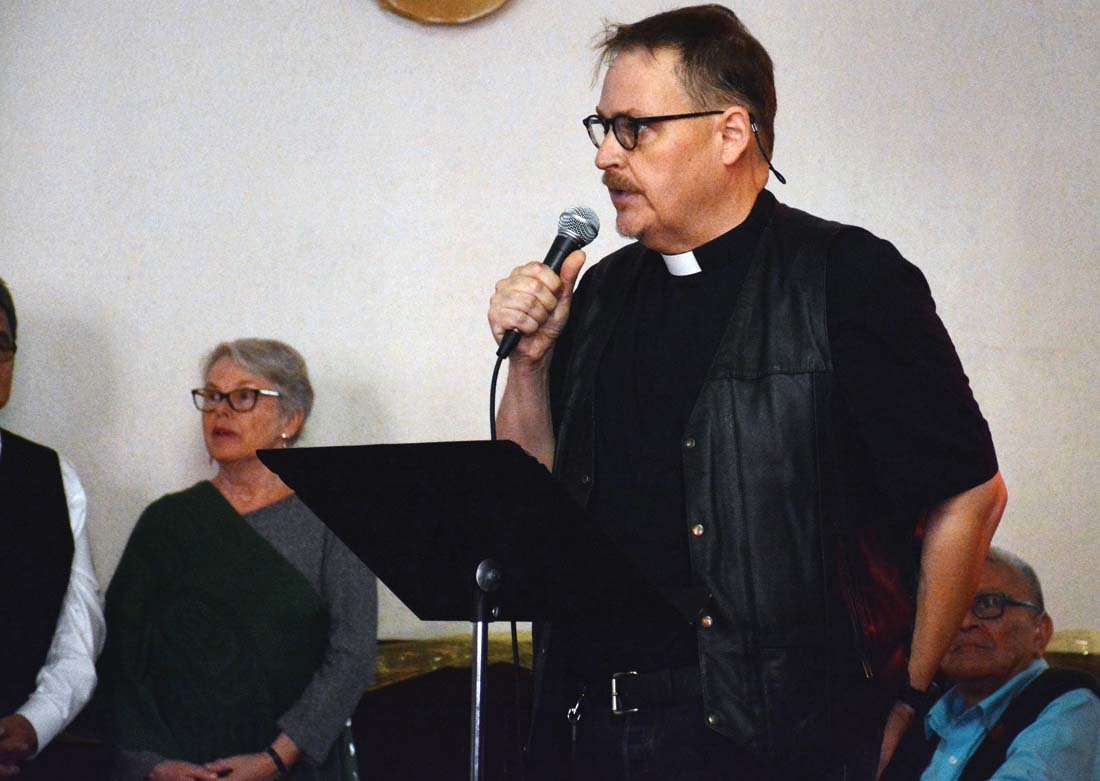 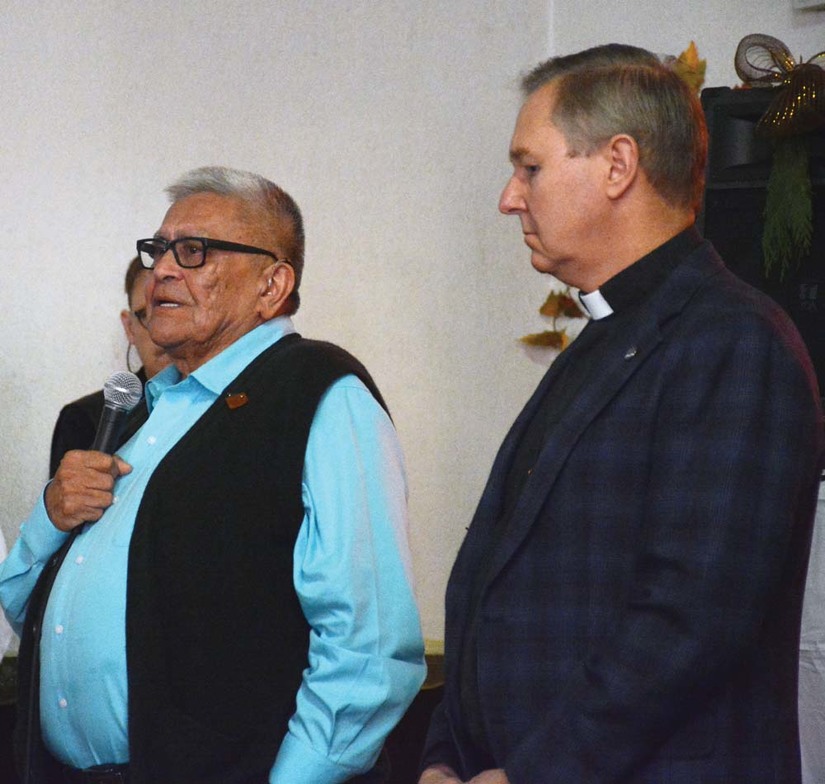 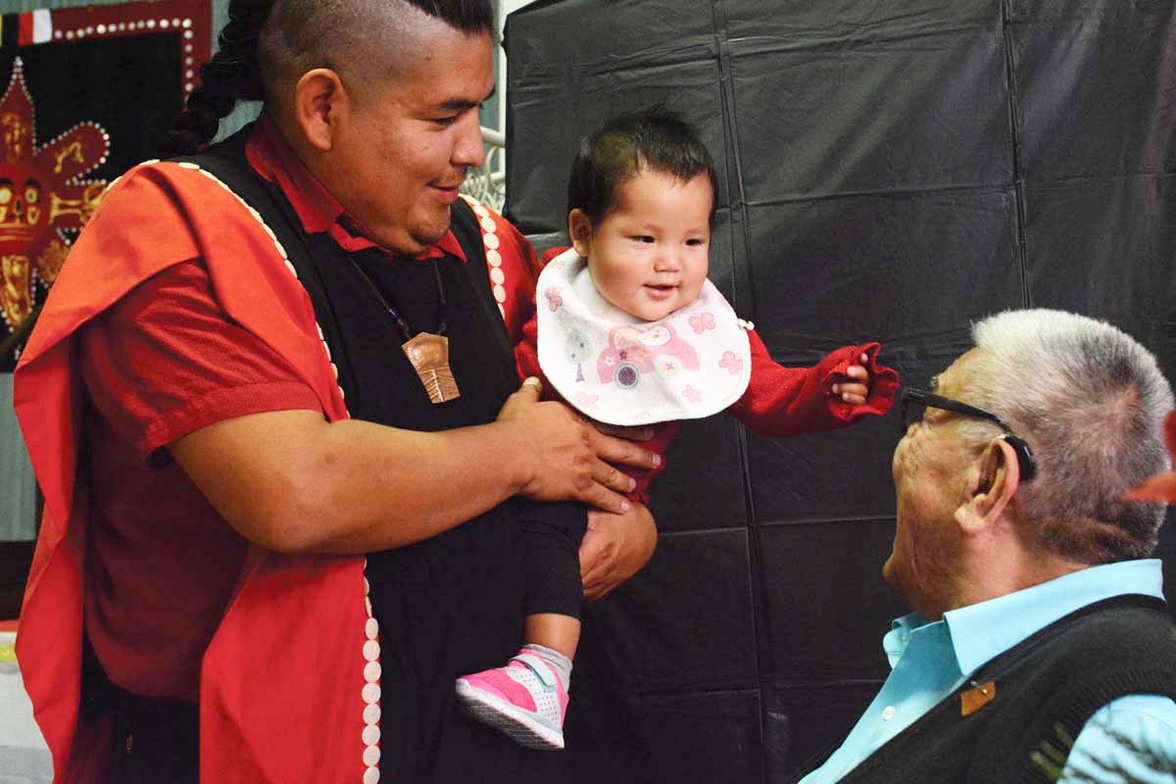 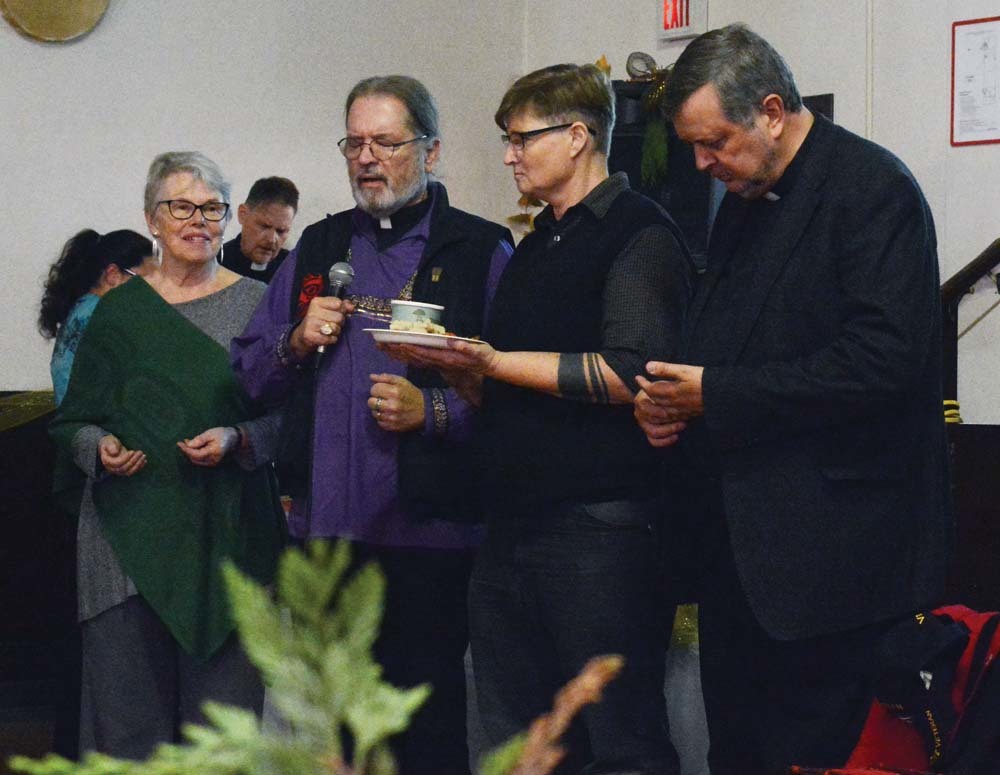 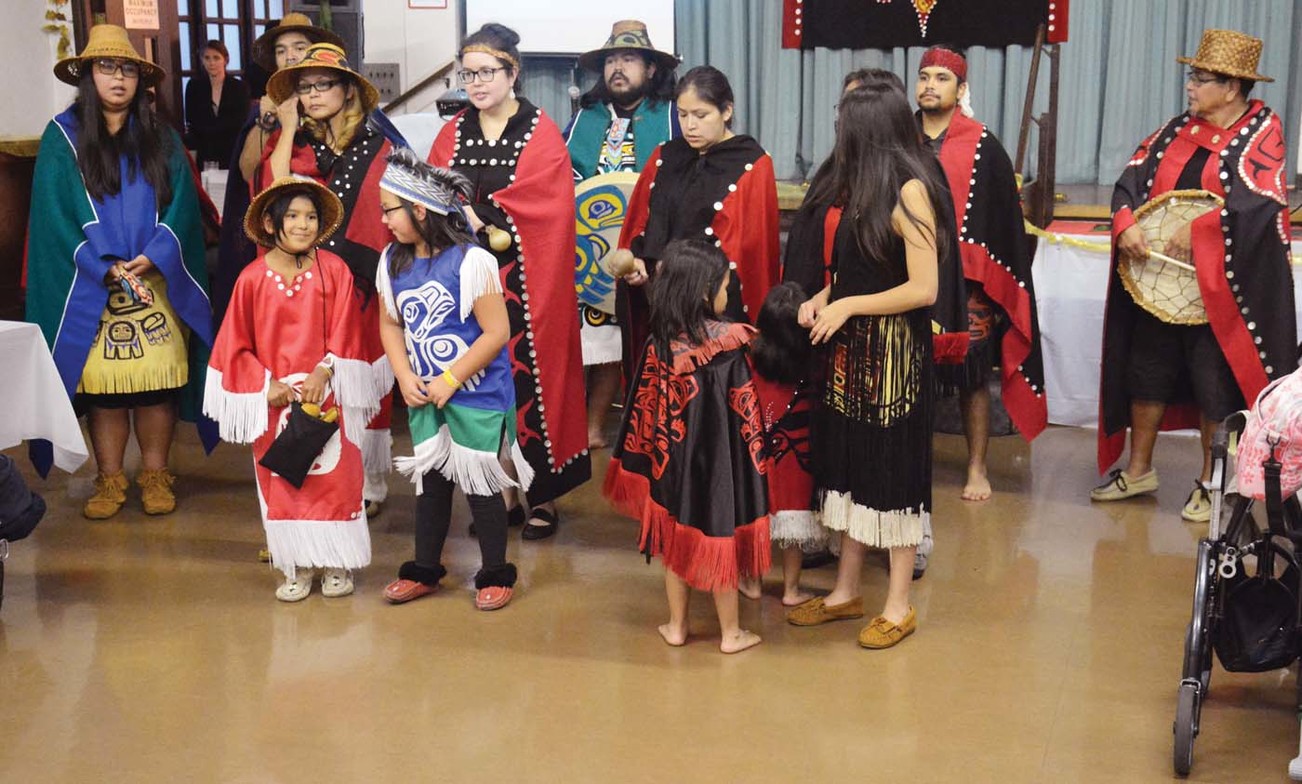 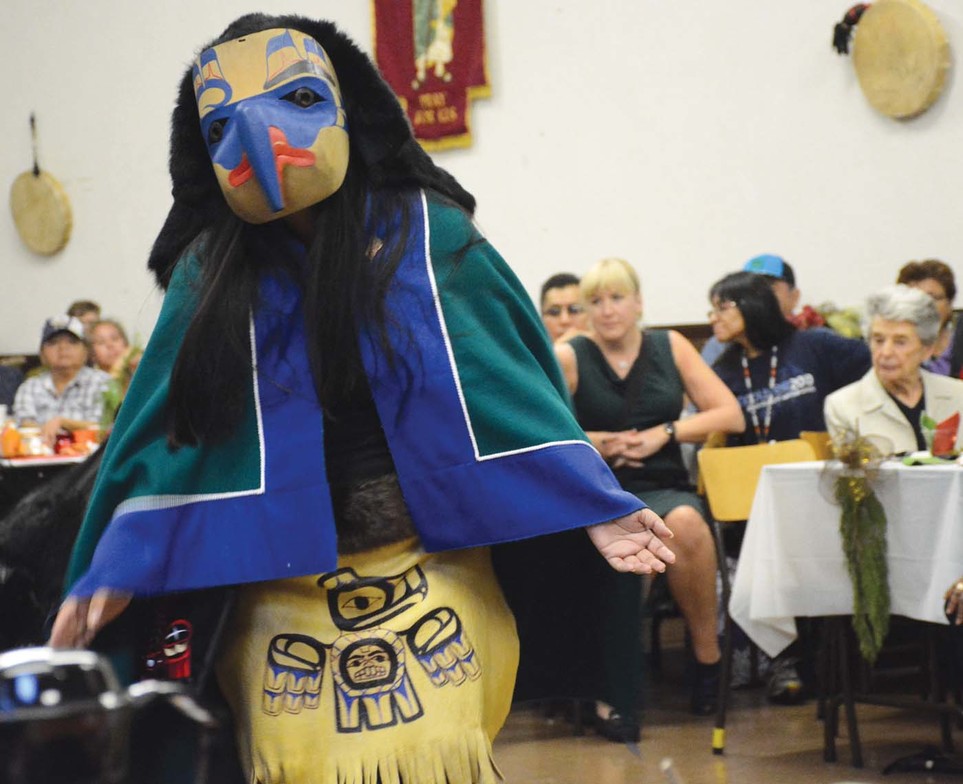 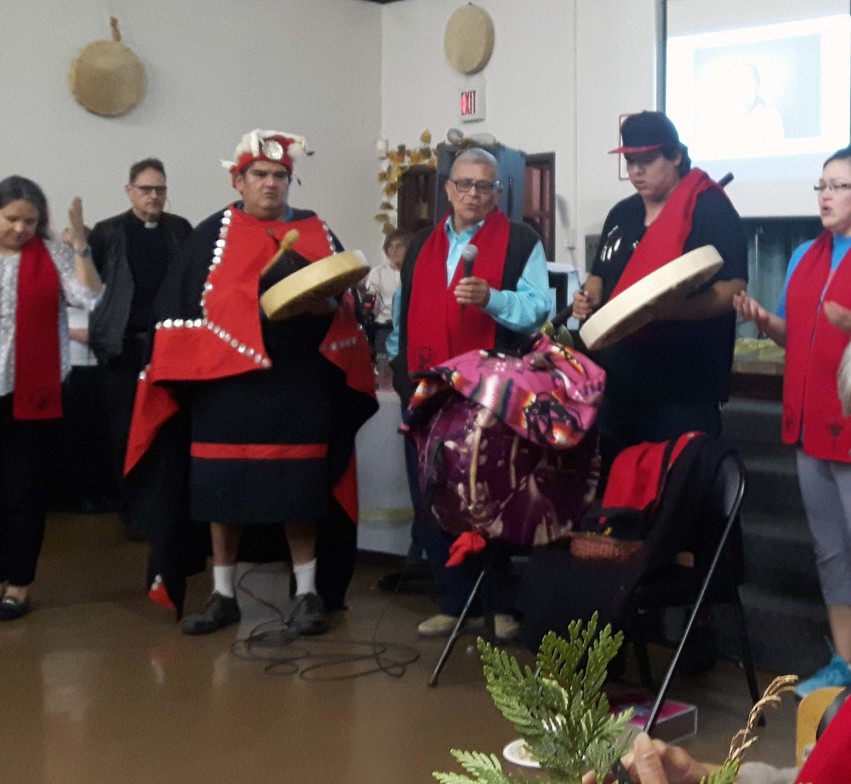 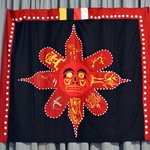 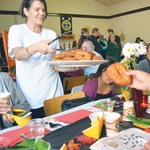 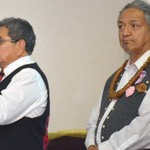 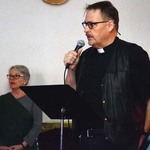 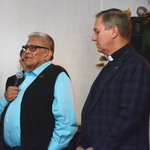 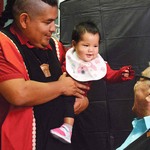 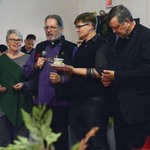 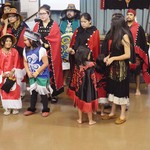 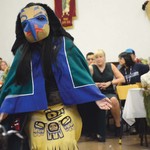 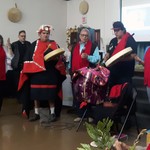 A significant event on the journey toward reconciliation was celebrated in the parish hall of St. James’, Anglican Church located on Vancouver’s Downtown Eastside on Saturday, September 23, 2017. It was a Traditional Feast organized by the lay and clergy leadership of St. James’, the Street Outreach Initiative (SOI) and many friends and supporters of both communities.  The Feast was inspired by St. James’ member Kelvin Bee, an Indian Residential Schools (IRS) survivor whose vision it was to invite IRS survivors for a meal where they would be welcomed, served by members of a church that had been complicit in the terrible wrongs done against them, and their presence honoured.

The planning for the Feast began a year ago prompting a request to go out  to the Office of the Indigenous Bishop of the Anglican Church of Canada, the Right Reverend Mark MacDonald asking that he attend the Feast and preach at Sunday Mass on September 24. He accepted the invitation. Lisa Barry and Becky Boucher of Anglican Video also wanted to be involved and to shoot some documentary footage so they made the necessary arrangements for the project and put September 23 on their calendar for a trip from Toronto to Vancouver.

The late afternoon of September 23, the corridors of St. James’ leading from the Gore Street side entry doors through the chapel and sanctuary space to the hall were decorated with tiny red LEDs and cedar boughs. Upon arrival in the parish hall the guests were greeted by a beautifully decorated room bustling with activity, the aroma of fresh fried bannock, and lively conversations.

For several hours that late afternoon and evening old friendships were renewed and new friendships were made. Food was served, and rich cultural traditions of songs, dances and stories were shared.

Elders Kelvin Bee (kwakwaka'wakw) and Jerry Adams (nisga'a) along with Pat McSherry and the St. James’ clergy took leadership in the programme segments of the Feast. Kelvin welcomed all those in attendance to the ancestral lands of the Coast Salish people and wryly added a very special welcome to those who had “done time” in IRS. Jerry chose the witnesses who would be asked to pay careful attention to what transpired during the evening and report back later.  Jerry added that “reconciliation is about caring for one another.” St. James’ rector, the Reverend Kevin Hunt said that it was “an honour and a privilege” to recognize the “precious presence of First Nations people amongst us as we continue this work of reconciliation” and to all IRS survivors present he said “Welcome! Although we are here to honour you, your presence honours us.” Other guests who participated that evening included: Bishop Mark MacDonald of the Anglican Church of Canada, the Venerable Douglas Fenton representing Bishop Melissa Skelton and the Diocese of New Westminster, Chief Robert Joseph and Sherry Joseph of Reconciliation Canada, Councillor Andrea Reimer of the City of Vancouver and the members of  “Starchild” singers/drummers and Kwhlii Gibaygum Nisga’a Dance Group.

It was an honour for everyone present to be joined by Chief Dr. Robert Joseph, O.B.C., a Hereditary Chief of the Gwawaenuk First Nation. Chief Robert and his daughter Shelley made time from their busy schedules to be in attendance the night before the Walk for Reconciliation which was one of the more significant events staged by Reconciliation Canada in 2017. Chief Joseph’s title at Reconciliation Canada is Ambassador for Reconciliation. He said in reference to those gathered at the Feast, “if we do not take the time to love one another, we are less…I am so moved by this event taking place here today.”

In reference to the Walk that would take place the next morning Chief Joseph said, “Let tomorrow be a time when our hearts and minds are open to everything that we have to learn…when we walk tomorrow, we will remember the survivors…we can carry forward the truth that we are all human beings.”  He  also offered his hope for the future, “One day when we are reconciled the next generation will be freed…we will embrace each other and will care for and love each other…visualize that future and visualize the promise of tomorrow.”

The Reverend Father Matthew Johnson, street priest of the Street Outreach Initiative was one of the principal organizers of the Feast. His opening remarks set the tone, outlined the vision of and context for the Feast. Fr. Matthew was good enough to share his words with diocesan communications:

Greetings survivors, honoured  guests, and all who are here. We are blessed by your presence in our midst today. This Feast is in honour of all survivors of the Residential Schools. Including the ones who never returned home.

As the work of healing continues, and although that work is difficult, you survivors continue to model for us Resilience, Courage, and Dignity.

Your personal witness is a powerful one.

Many survivors tell us that they have had enough apologies from Christians and Canadians, and it is now time to move forward.

As a local Anglican Church, this event is one step in our journey beyond apologies, to actions.  . . . So that, possibly, we may come to know one another, perhaps for the first time.  This time, as respected equals.

Our hope is that other local Anglican parishes may draw inspiration from this Feast, and may pursue projects like this, where they are, throughout Canada.

We settler Christians are slowly learning from Aboriginal cultures.  Your cultures teach us that new steps are celebrated with food, songs, music and dancing.  So that is what we’re going to do as we honour the survivors this afternoon.

Survivors—these, your qualities, are demonstrated above all in this: That, against all odds, in the face of Governments, Churches, and a Society that sought to deprive you of your cultures, you, and previous generations of survivors, nonetheless, took up and handed on the Teachings and Traditions of your Peoples to the next generation.  Languages, songs, stories, dances, ceremonies, medicine, restorative justice . . . all these you have successfully handed on to new generations of young people who take great pride in their Aboriginal identity.

This . . . this is just one of many signs of the Dignity, Courage, and Resilience you show to us.  And it is you, whom we celebrate today.

For more photos and captions please click this link to visit the photo album on Anglican Conversation the Facebook page of the Diocese of New Westminster.