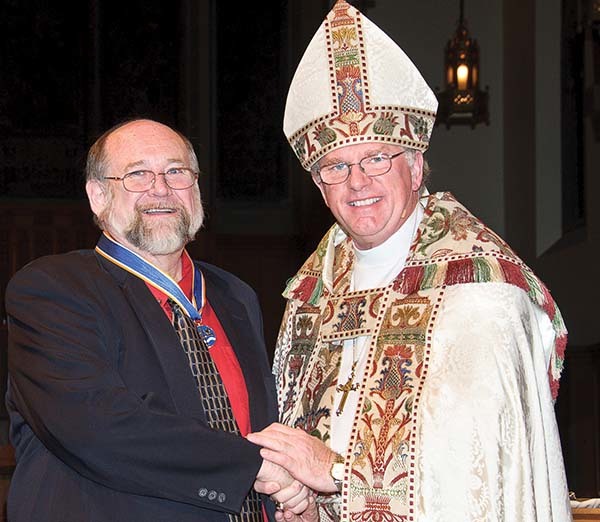 He was born in Vancouver, raised in New Westminster, and lived in Langley for years before his death. Monte led a colourful, fascinating life, undertaking various careers before joining Rogers Cable, later Shaw, where he worked for many years, and where he was president of Local 60 of the TWU.

Monte was a man of great faith, active in the Anglican Church at the national, provincial, diocesan and parish levels. He was invested into The Order of the Diocese of New Westminster in its inaugural year of 2009. The Citation read at the investiture which focussed on the breadth of his service to the church reads:

“Monte is a wise elder and sage guide in our Diocese who has been a support to many, including at least two bishops. Monte has served on many diocesan committees & task forces including Diocesan Council, Provincial Synod and General Synod.”

He spent his life as a champion for others, fighting to right wrongs and serving all who came to him for help. He served as an auxiliary constable with the RCMP and worked with Air Cadets. He touched the lives of many people, who will remember him with love and mourn his passing.

Monte loved fishing, was a skilled woodworker, guitarist, and a champion marksman. He loved cruising the back roads on his motorcycle. He loved a challenging negotiation, good Scotch, folk music and most of all, his friends, family, and “framily” – chosen family.

Monte is survived by loving family, friends, and colleagues. A memorial service will be held at 2pm on Saturday, July 28 at St. Dunstan's, Aldergrove, 3025 264 St, Aldergrove, BC

Condolences may be posted at www.arbutusfuneralservice.com. In lieu of flowers, donations to the Parish of St. George, Ft. Langley would be gratefully received.