Saints Are People Who Let the Light Shine In 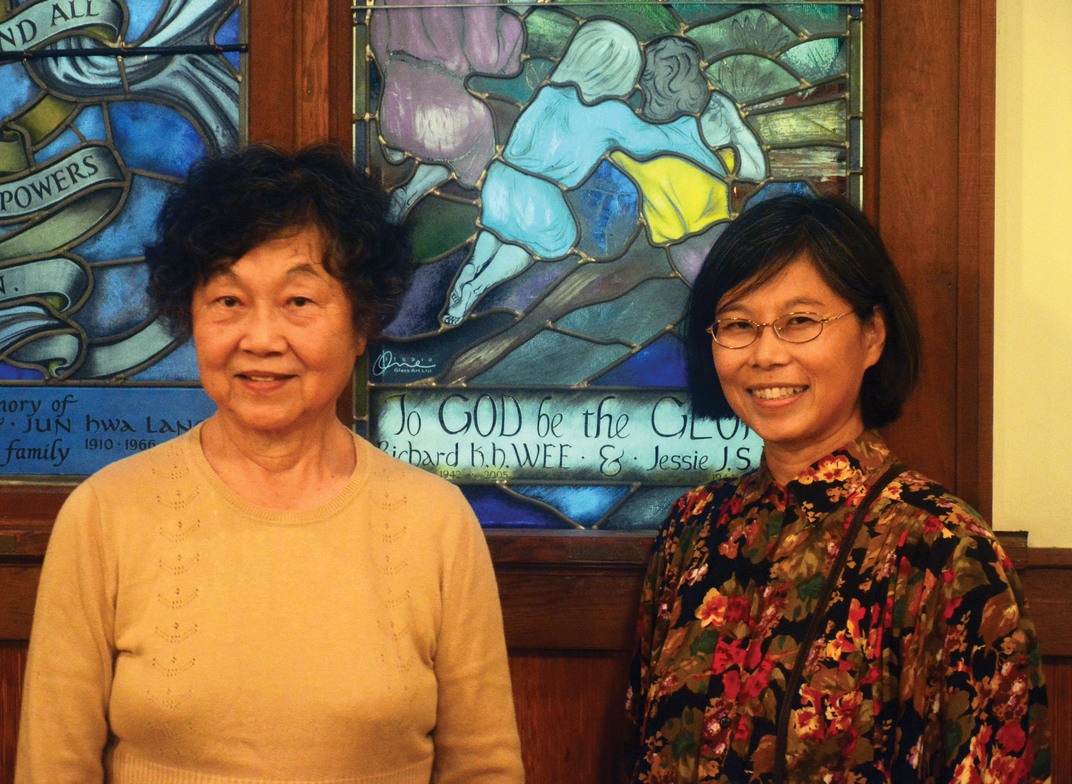 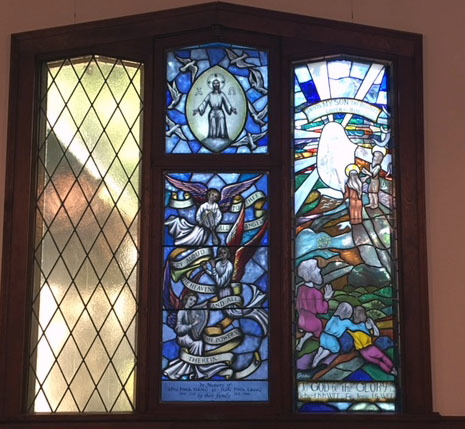 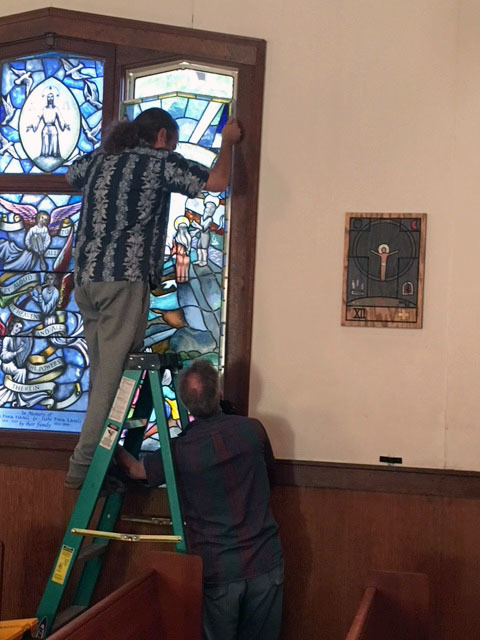 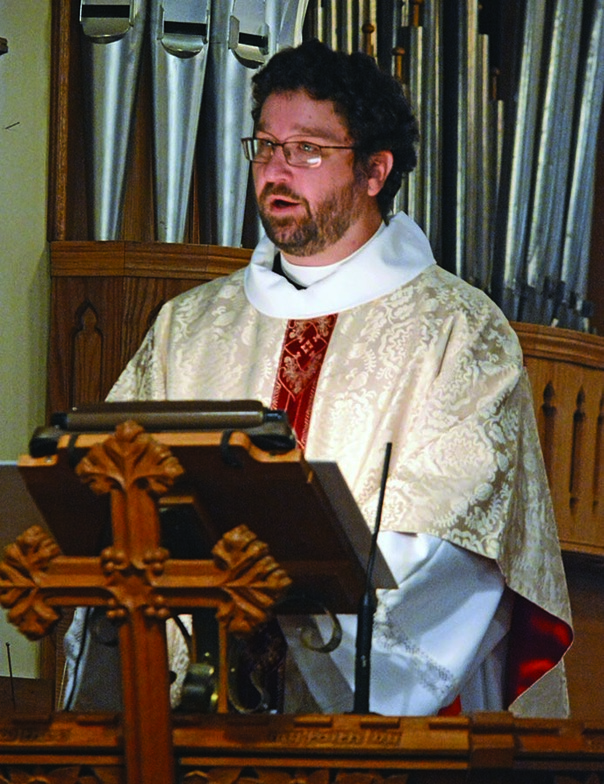 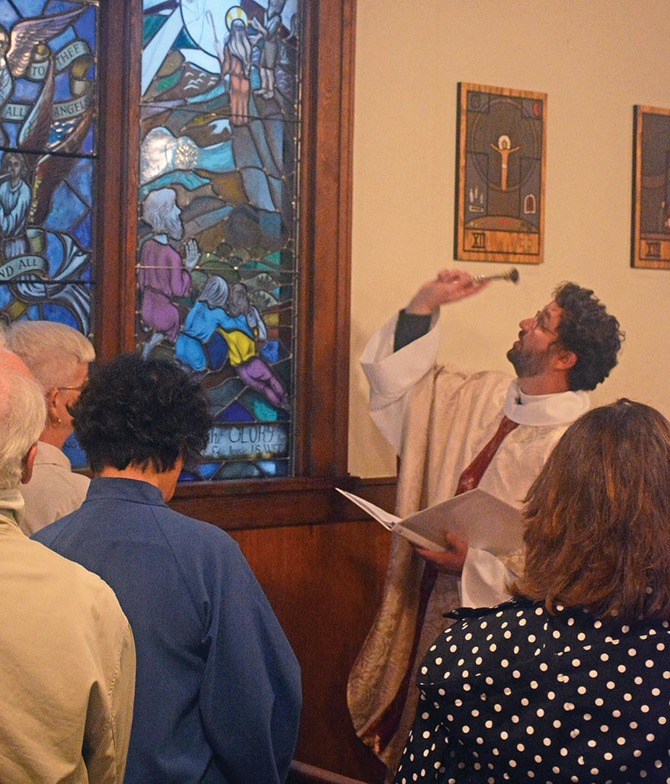 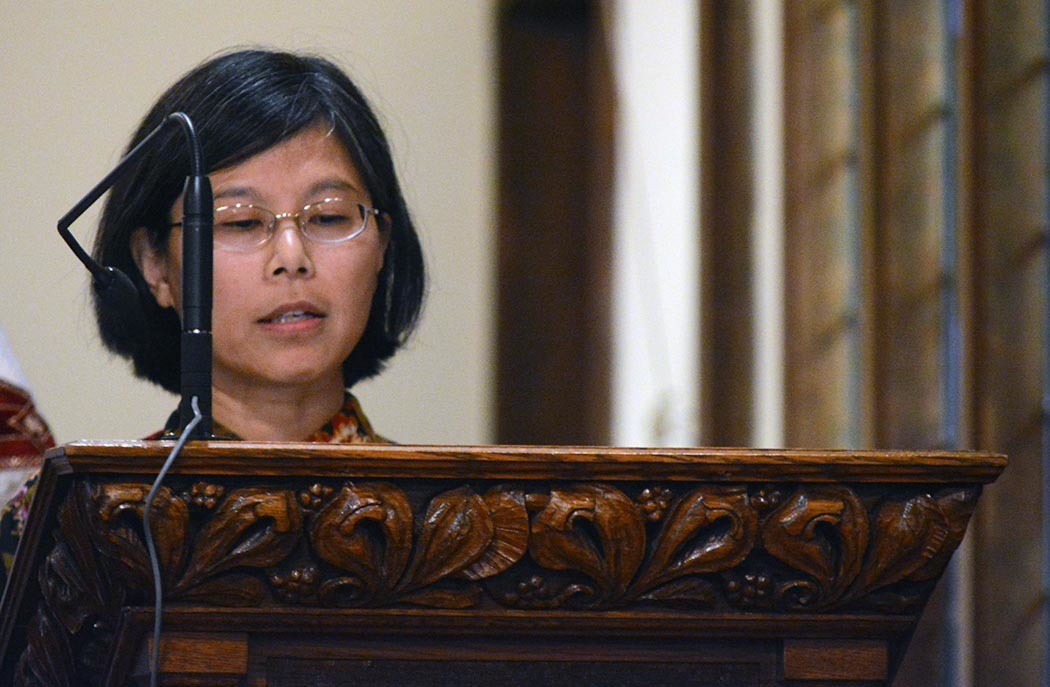 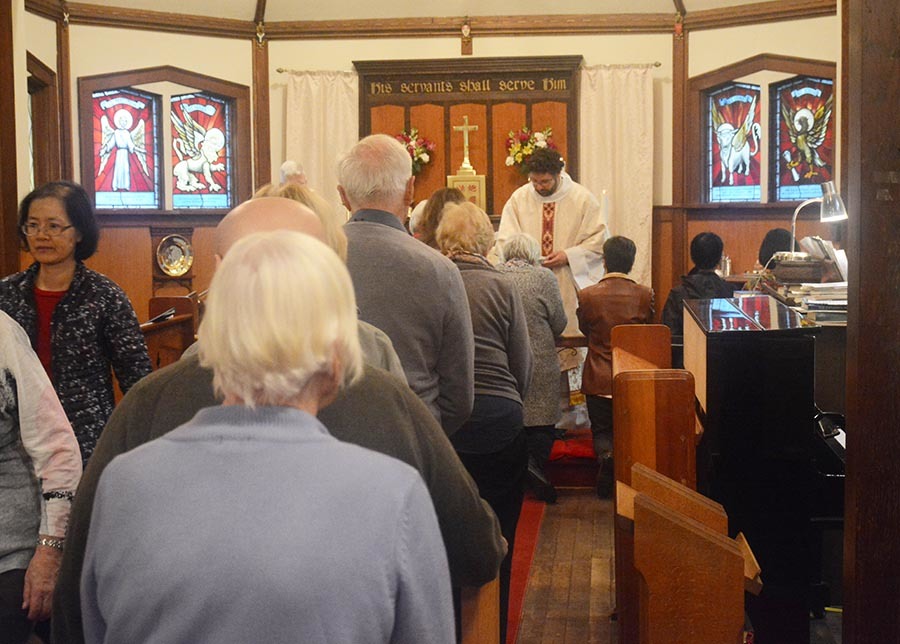 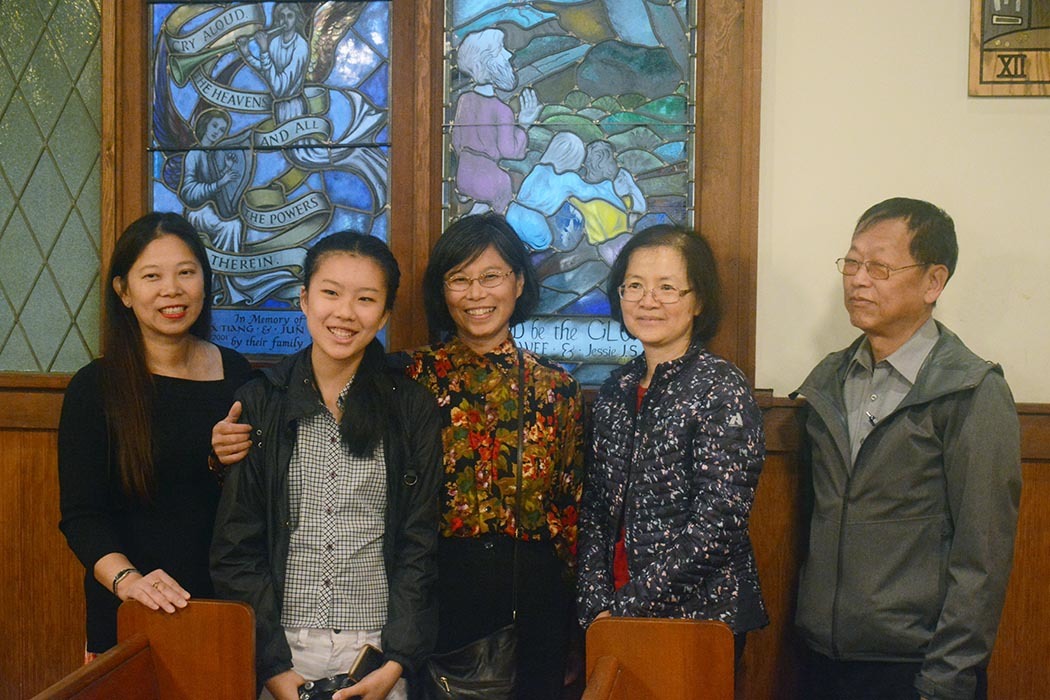 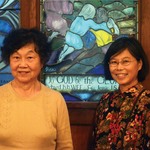 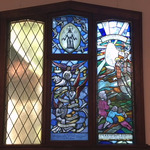 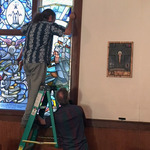 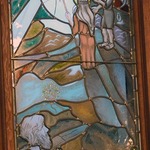 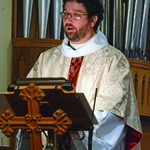 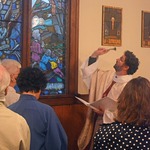 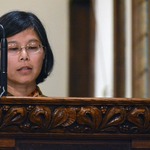 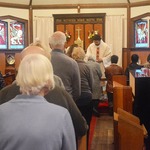 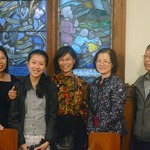 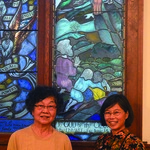 Joy Wee, a parishioner at St. Catherine's, Capilano who often attends St. Martin's, North Vancouver has designed and also arranged the donation of a new stained glass window depicting an interpretation of The Transfiguration, to the Glory of God, and to add to the interior beauty of the North Vancouver parish.

The design, approval and creation process from conception to installation was complicated and took place over a number of years but this was a labour of love for Joy as she remained closely connected to the project throughout. In an email that Joy wrote to St. Martin’s rector, the Reverend Robin Ruder Celiz she said,

“My father was the one who wanted the Transfiguration Theme for a memorial window… The donation is therefore a gift from ‘Richard and Jessie Wee’ (not in memory, as my mother is still here).  Of course, my gift is the design and whole creation process itself.  My father was a former rector's warden at St. Martin's.  The window is installed next to the memorial window for my maternal grandparents (Jessie's parents), designed by Irene Alexander.  She began the process shortly after his death in 2005, from what I understand, and the drawings were discovered lost in the Spring of 2017.  From then, I came up with the design, based on readings from the Bible"

After months of work through the fall of 2017, the drawing was completed in December 2017. Studio One Glass Art was retained to construct the stained glass. Yves Trudeau was the artist. Studio One has in recent years created stained glass for Christ Church Cathedral.  Joy continued to be deeply involved in the process collaborating with Yves Trudeau, she recounted that process in her email:

“First, I worked with Yves on the lead lines, based on the full-sized drawing, changing elements where glass pieces would have been too small. The final version was approved by Parish Council, and we went ahead, selecting glass pieces.  After they were cut, the stain glass painting was done by Jose, and subsequently  fired after any needed changes as requested by me were done.  Then they were waxed and leaded/cemented. The final input (how much etching to be done on some of the pieces) provided by me was completed yesterday (September 17).  All in, it was 13 years in the making, and I am pleased that it is up and being blessed the day before my father's birthday.  It is my hope that it will inspire people for many generations in the living Church. “

Diocesan communications were on hand to cover the dedication at the main celebration of the Eucharist at 10am, September 30. The liturgy was Sung Holy Communion from the Book of Common Prayer celebrating the Feast of St. Michael and All Angels transferred from September 29. Prior to worship, the rector, the Reverend Robin Ruder-Celiz welcomed the congregation and offered a brief description of what would take place during worship regarding the dedication. Music Director, David Millard came forward from his post on the organ bench to rehearse the congregation, leading them through a hymn tune that he had composed years earlier in honour of St. Michael and All Angels and then the Introit Hymn, “Christ, the fair glory of the holy angels” was sung and the worship began.

In his homily that began by making reference to the readings: Genesis 28: 10-17, Revelation 12: 7-12 and John 1: 47-51, Ruder-Celiz focused on the “drama and intrigue” that fill the Scriptures for the Feast Day and how our current world is also a place where “Wars still happen. There remain forces of good and evil in this world.” And then he related this to the installation of a new stained glass window:

“It is hard to justify the installation of a new stained glass window on many levels. There are economic, social and other strains that demand our time, energy and resources for sure. We too may be perceived as being disconnected from the world around us as we focus on things beautiful and extravagant and ignore a world that is broken and hurting, hungry and lost. But here are a few reasons as to why stained glass windows and any form of art is important and has a place in world such as ours.”

He then told a story which aptly illustrated the place that stained glass windows play in our faith and also in Anglican ethos:

"A young boy sat in a quiet church one Sunday. He was early and therefore sat alone in the pews as clergy, servers and others busied themselves in preparing for the Sunday Mass. After several moments one of the priests came over and sat next to the boy. After the usual pleasantries and introductions the priest asked what the boy was looking at.

'I’m looking at the saints', he responded.

After a few moments the priest asked, 'Who are saints?' The boy thought about this and replied, 'Saints are people who let the light shine in.' The two of them continued to admire the stained glass windows for a while depicting images of saints and themes from Scripture before it was time to say Mass.

Truer words have never been spoken I dare say. Saints are indeed people who let the light shine in. Through the glass it is not just any light passes through. The light is changed and reflected. It takes on colour and shape as it passes through the window into the church where the faithful gather. They are radiant, splendid and as their colourful glare illumines the church they offer us a gateway to the Divine where our world is connected to the heavenly realm where people of all colour and shape live in harmony."

Following the sermon, the rector poured water in the font, blessed it, transferred the water to an aspersorium which was held by Julie the server and then he dipped the aspergillum and sprinkled the window with holy water. The prayer of blessing was as follows:

Priest: The glory of God is the city’s light and its lamp is the Lamb

And then the rector and congregation all joined in for the prayer:

Lord God, the whole world is filled with the radiance of your glory: we ask you to bless and hallow this window which we now dedicate to You for the adornment of this place and the inspiration of your people. Grant that as the light shines through it in many colours, so our lives may show forth the beauty of your manifold gifts of grace, through Jesus Christ our Lord.

The liturgy of Holy Communion then continued with the Creed from the BCP sung to the familiar (to many of a certain age) 16th century John Merbecke tune, Joy Wee was the intercessor offering the Prayers of the People which added a feeling of continuity to the worship. The choir under the direction of David Millard offered the motet, Cherubic Hymn II by Tchaikovsky during Communion and shared an excellent rendition.

Following worship, Joy and members of her family were good enough to pose for some photographs as we waited for Jessie to return from removing her choir gown. Then Jessie and Joy stood in front of the new Transfiguration window, happy in the knowledge that they had honoured husband and father Richard’s wish to donate a beautiful window with this theme and that it was created by his daughter.

More photographs with captions available in a photo album at Anglican Conversation the Facebook page of the Diocese of New Westminster.

Clergy News Around the Diocese - Update for May 2021 Ship to Shore for Spring 2021 May 17 - International Day Against Homophobia, Transphobia, and Biphobia