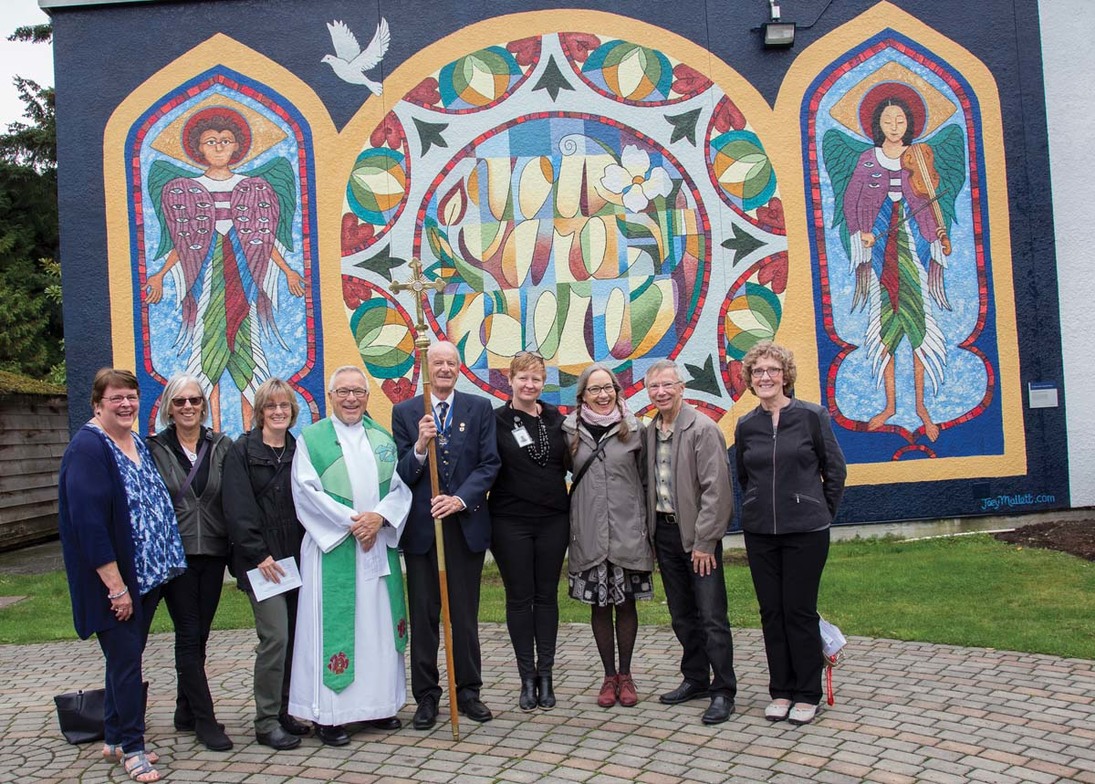 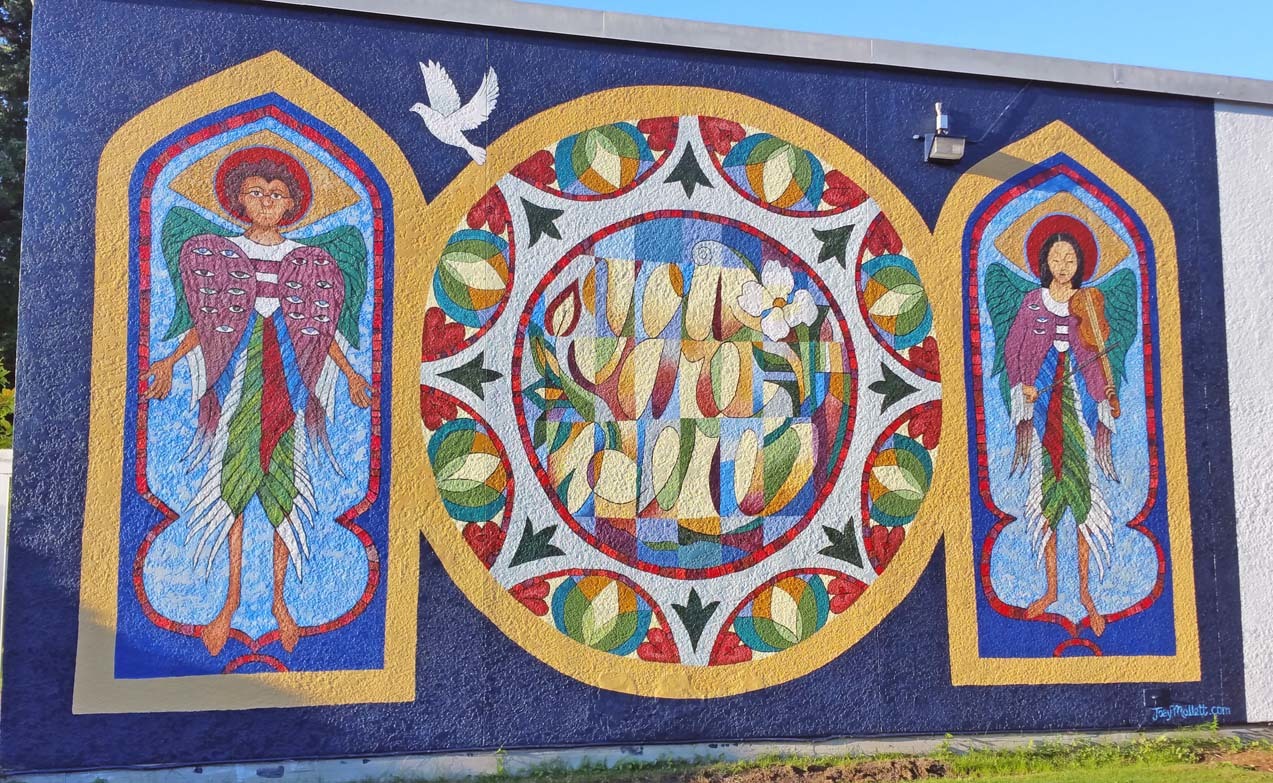 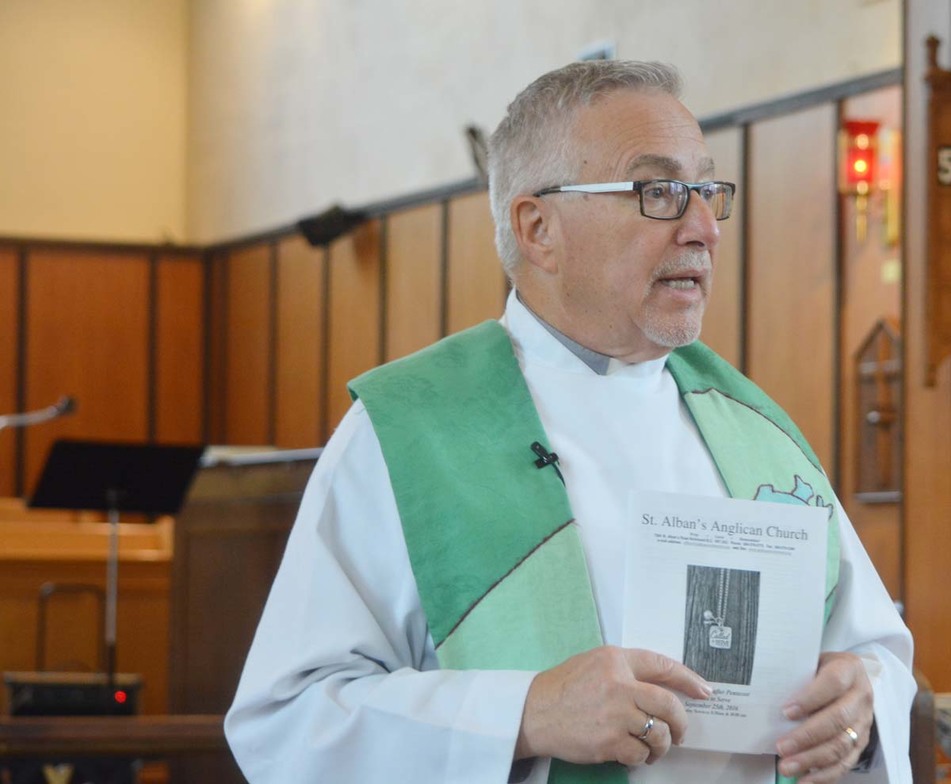 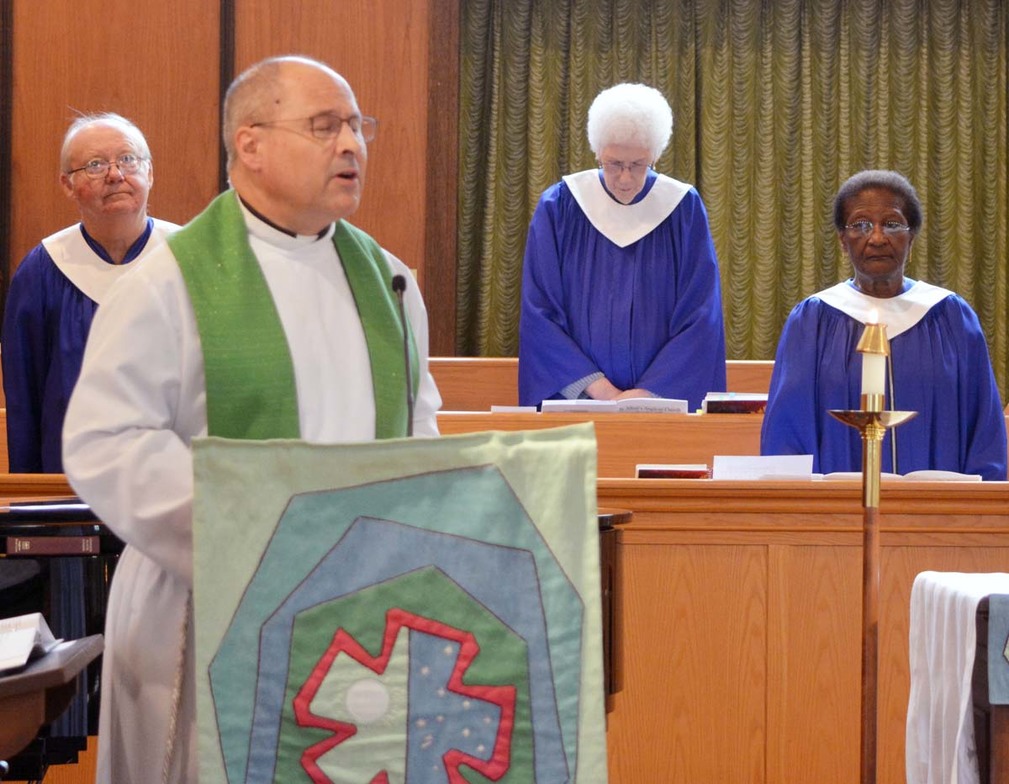 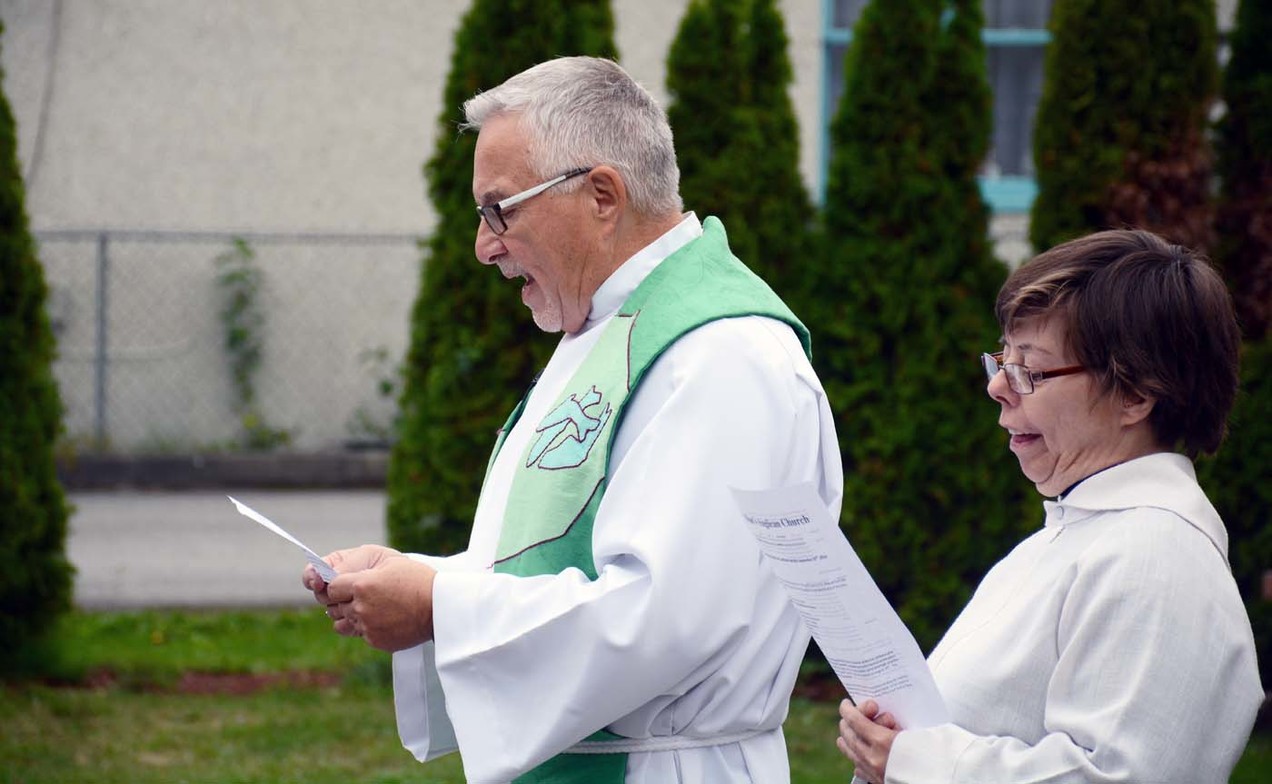 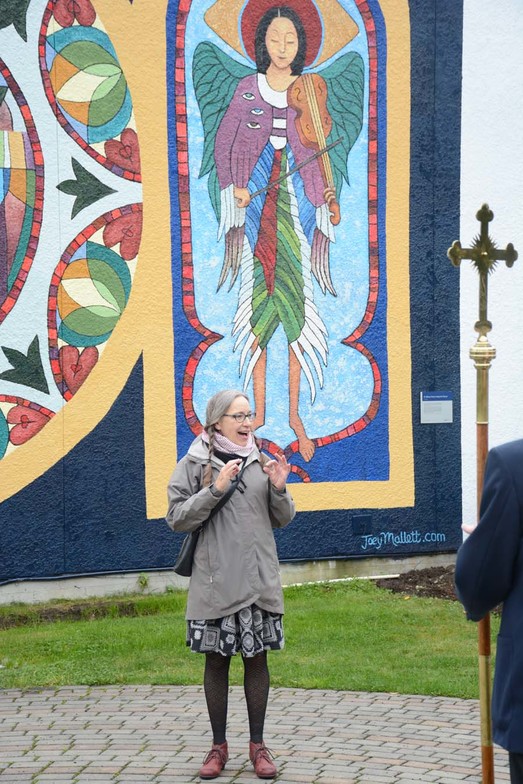 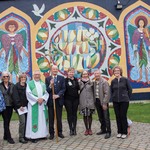 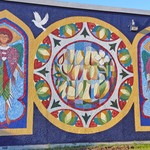 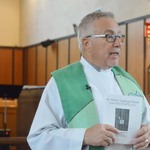 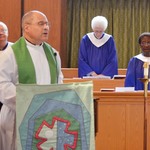 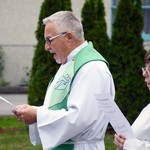 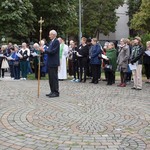 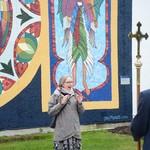 Go in Peace to Offer Loving Kindness to All Those We Encounter The Dedication of the Mural at St. Alban, Richmond

The City of Richmond is the latest locale in the Metro Vancouver Area to receive a mural created by well-known Vancouver artist, Joey Mallett. And, the mural is on the grounds of a parish of the diocese of New Westminster – St. Alban’s.

The mural, located on the exterior north wall of the St. Alban’s parish hall overlooking the church’s outdoor labyrinth compound features three panels. The image on the left is a replica of the 'Seraph' panel on a clerestory window at Chartres Cathedral in France.  The Seraph is mentioned in the 6th chapter of the prophet Isaiah, in his vision of the temple and was the first to proclaim the words of the Sanctus - "Holy Holy Holy, Lord God of Hosts."

The image on the right was inspired by the stained glass of Chartres but is Joey Mallett's own creation, a female figure, with seraph wings also sporting eyeballs in the style of the Chartres replica and playing a violin.

The centre panel bears the words, "You are Here" which bring to mind the themes of 'mindfulness'  and 'presence' which are so much a part of the labyrinth experience.

This project was developed and pursued by the St. Alban’s Labyrinth Committee and was funded by a grant from the City of Richmond. The mural contract was signed by: Larry Scherben, ODNW representing the Parish of St. Alban; the artist Joey Mallett; and a representative of Office of Public Art for the City of Richmond  on July 18, 2016. The grant was $10,000.

Work by the artist and her team began on August 8 and was completed August 30. Mural artist Joey Mallett began painting murals in 1997. One of her better known works is in collaboration with artist Rita Buckwitz, the “St. James” mural at Gore and Powell in Vancouver’s downtown eastside, created in honour of the City of Vancouver’s 125th Anniversary in 2011.

On Sunday, September 25, the 19th Sunday after Pentecost the St. Alban’s community gathered for the second worship of the morning, the 10 am Celebration of the Eucharist. St. Alban’s priest-in-charge, the Reverend John Firmston welcomed the congregation and also welcomed the guest preacher for the liturgy, Richmond/Delta Deanery regional dean, the Reverend Brian Vickers who is rector of St. Anne’s, Steveston. Reverend Vickers had left his flock in the capable hands of newly appointed curate, transitional deacon, the Reverend Mark Munn and Christ Church Cathedral associate priest, the Reverend Marnie Peterson.  Reverend Firmston also welcomed guest soloist Jerry DesVoignes who with the skilled accompaniment of St. Alban’s Director of Music, Chris Morano and the assistance of the Choir of St. Alban led the music in worship that morning.

The liturgy was prayerful and well constructed and featured a number of musical selections from the United Church hymn collection More Voices United. Reverend Vickers chose the Gospel, Luke 16:19-31 for his text and spoke movingly about wealth, poverty and caring for one another.

Upon completion of the Eucharist, Jerry DesVoignes offered a postlude which was then followed by the crucifer, David Kimpton, ODNW leading the sanctuary party, choir and congregation out through the nave, narthex and north to the Labyrinth where a number people including the artist, Joey Mallett and City of Richmond Office of Public Art representative, Christine Corris-Wingfield had gathered in advance of the Service of Dedication of the Labyrinth Mural.

It took about five minutes for the gathering to assemble. Reverend Firmston assisted by server Pat Houston began the Service of Dedication with The Invocation: “We are gathered here today to dedicated this mural as an offering of this Parish of St. Alban and from the City of Richmond to the benefit of those who come to this labyrinth, for the beautification of this place and to the glory of God. All things come from you, O God.”

Reverend Firmston then offered a prayer:

God our creator and redeemer, give us grateful hearts and willing hands, that we may commit to building your reign of peace and justice among all peoples to the glory of your Son our Saviour Jesus Christ Church Parish Amen

Reverend Firmston provided some background information about the mural and then he began the Blessing with a prayer participated in by all:

“Almighty God, we thank you that you have put it into the hearts of your people to make offerings for the beautification of this church and of this city of Richmond. Be with us now and bless us as we dedicate this mural to your praise and glory; through Jesus Christ our Lord. Amen."

He then asked if anyone involved in the project wanted to speak and artist Joey Mallett came forward and shared some information about her process and her inspiration for this work. She admitted that the concept for the piece had made itself known to her while she was sleeping. She awoke, excited and energized and eager to put her thoughts in order. When she returned to her bed (which is apparently taller than average and requires a footstool to ensure accurate access) she stumbled and broke her foot. But that did not put a damper or a delay on the project.

Congratulations to everyone involved in this great example of a church making a connection in the community and specifically in the neighbourhood where the church is situated. May the people of St. Alban’s with the people of Richmond enjoy this mural and the peace and spiritual comfort that the labyrinth brings for many years.