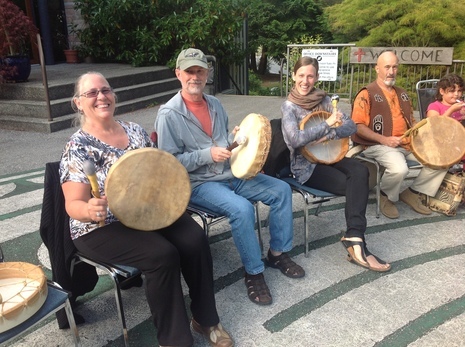 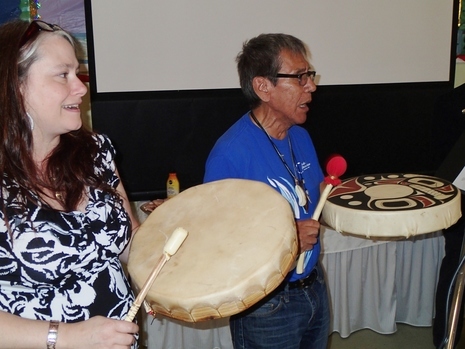 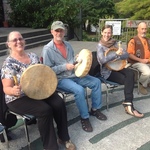 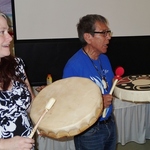 Many thanks to John Denham of St. Hilda-by-the-Sea for this report and these photos.

As part of the St. Hilda’s Social Justice Umbrella, Indigenous Justice has been a recent focus at St Hilda’s. On April 2, after the regular 10:00am service, the film “Reserve 107” was shown in the sanctuary. This wonderful film of reconciliation follows a ten year journey of relationship between the Mennonite and Lutheran communities of Laird, Saskatchewan and the people of the Young Chippewayan First Nation. Discussion after the film, although brief, was indicative of the desire of parishioners to learn more and to pursue a path of reconciliation in our own community.

Then, on May 13, the Kairos Blanket Exercise was experienced by approx. 30 people. We were honoured to have as witnesses two elders of the shíshálh First Nation, two Metis women, and our good friend Coyote Terry Aleck of the Lytton First Nation. The exercise was very moving and eye opening for everyone. As shocking as a lot of the information is, the primary takeaway for most people was the impact on our hearts of the visual progression of colonization and oppression of indigenous peoples throughout Canada. We were able to weave in historical information and the direct impact of Canadian Laws, Policies, and Practices on the shíshálh people. Of special note were the beautiful prayer shawls knitted by parishioners and gifted to the Indigenous Witnesses in honour of their presence and words of sharing.

Along with the monthly drum circle and a special service for Aboriginal Sunday (June 18), more educational events are being planned for the fall e.g. movies, book studies, dialogue circles and we are exploring the possibility of working together with people of the shíshálh Nation on a Project of Reconciliation.

A poster of the June 24 Reconciliation Event and Blanket Exercise at Robert's Creek is available below for downloading, sharing electronically, posting and printing.