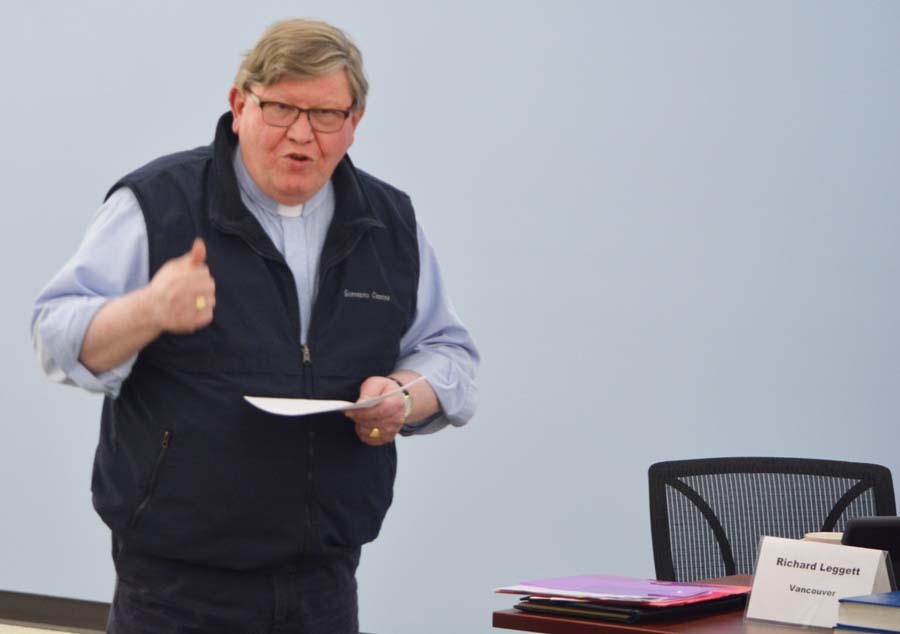 The Work of the Assessment Task Force

As Paul travelled through the eastern Mediterranean carrying the good news of God in Christ to Gentiles and Jews, he also carried a sense of responsibility for the Christian community in Jerusalem and Judea.  Paul knew that the future of these communities depended upon the financial support of the emerging Christian communities along the shores of the Mediterranean.  In his letters to Christian communities in Rome and Corinth, Paul urges them to give generously to support their sisters and brothers.  To the Christians in Corinth he writes, “I do not mean that there should be relief for others and pressure on you, but it is a question of a fair balance between your present abundance and their need, so that their abundance may be for your need, in order that there may be a fair balance.” (2 Corinthians 8.13-14)

Since those early days Christian communities, whether congregations or dioceses, have tried to determine how a ‘fair balance’ can be struck between the abundance of some congregations and the need of others.  But the basic principle is this:  We are mutually inter-dependent upon each other, whether internationally, nationally or regionally.  So the abiding question is how we steward our resources to support our shared ministry priorities as we participate in God’s mission to redeem and renew us and all that God has made.

One of the ways we define these shared ministry priorities is in the Diocesan Vision Budget adopted by Diocesan Synod.  While we can be lost in the line items, it is vital that we understand each line to represent our commitment to a particular expression of our ministry as a Diocese.  The challenge is to find a transparent and fair way to determine the ‘fair share’ each congregation contributes to the Vision Budget.

For some years concerns have been expressed about the current Regulation that governs assessment.  In response to these concerns, Diocesan Synod 2015 “RESOLVED THAT Synod requests that the Bishop appoint a task force to review the Assessment Formula; to bring recommendations regarding the Assessment Formula to the next regular Synod in 2017; and to provide an interim report to Diocesan Council by October 2016.”

We began our work by making sure we all understood the current Regulation and the rationale behind its requirements.  Early on in our work, we decided that our job was not merely to tinker with the existing Regulation but to develop recommendations that we believed were transparent and fair and sustainable.  We consulted other Dioceses in the Anglican Church of Canada, small and large.  These early meetings led us to develop a set of working principles to guide us as we consulted with the laity and clergy of the Diocese.  These principles were couched in questions we decided to take to the Archdeaconries.

And out we went into the Archdeaconries of the Diocese.  We learned that most congregations were willing to include all rental income of the church and hall in their parish operating receipts rather than the existing 50%.  We were slightly surprised to learn that most congregations were comfortable with a three-year rolling average rather than assessment being based on the previously reported year alone.  A significant majority were in favour of a $35,000 exemption and a flat $1200 assessment for those congregations whose receipts were less than $35,000.  Reducing the assessments rates to two or three received a great deal of support as did the continuation of the Diocesan Growth Fund.  There was little support for any assessment on earnings in the Consolidated Trust Fund.

One question was raised in the consultations.  Participants asked how the Diocese was going to use the assets of diocesan property not currently used for the purposes of service, worship, evangelism, education and pastoral care.  This question was relayed to the members of the Financial Sustainability Working Group and influenced the proposed revision on Canon 30.

Following the consultations we went back to work and the drafting process began.  By January 2017 Diocesan Council approved the specific recommendations of the Assessment Task Force and, in consultation with the Financial Sustainability Working Group, the final drafts of two regulations and one revised canon were prepared and presented to Diocesan Council on the 22nd of March. Council received our work and these pieces of legislation will come before Diocesan Synod in May. The two proposed regulations and revised canon are a package.

Draft Regulation 24 replaces Regulation 12, the current assessment regulation, and provides the Diocese with a fair, transparent and sustainable means of determining each congregation’s fair share of the shared diocesan budget.  The key elements of the draft Regulation are:

Our calculations indicate that a significant majority of congregations will see a decrease in their assessment. This will, of course, have an impact on how we fund the Vision Budget.

Draft Regulation 25 changes the name of the current ‘Diocesan Growth Fund’ to the ‘Diocesan Ministry Support Fund’.  This change more accurately describes the purposes of the fund which provides additional funding for existing and new diocesan and congregational ministries.  More significantly, the new Regulation names the Administrators of the Anglican Initiatives Fund as the allocation committee.  Synod will be asked to increase the number of clergy and lay administrators elected by Synod from two (one clergy, one lay) to four (two clergy, two lay).  The current administrators have unanimously approved this change to the By Laws of the Fund, but Synod must act as well.

Revised Canon 30 will provide the Diocesan Synod and Council with the means to fund continuing and new ministries of the Diocese with resources acquired through the sale of diocesan property.  The revised canon renames the ‘New Development Fund’ as the ‘Mission and Ministry Development Fund’ and includes a new purpose for this fund to ‘finance by grants such ongoing and new ministries of the Diocese’ as Diocesan Council sees fit.

Regulations 24 and 25 and revised Canon 30 provide our Diocese with the tools we need to support our ongoing work as God’s people in this place and time by striking what Paul called a ‘fair balance’.

In order for this ‘fair balance’ to be struck all three pieces of legislation will need to be approved by Synod.  We hope that Synod will agree that such a balance has been found so that we can share our abundance as well as meet our needs.