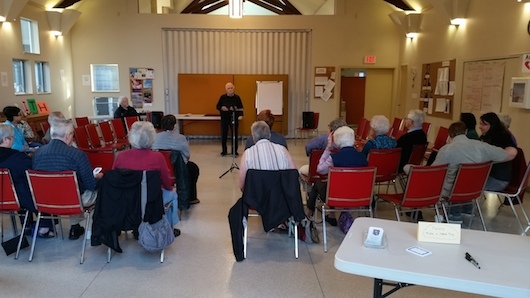 The build up to this day started in September with small skits by two of the Stewardship Committee members Colleen Butterley and Elaine Renforth. The first skit was a “teaser” with only a date, time and the name of the event – continuing for the next three weeks giving out more and more information until October 11th when most of the mystery was revealed including the name of our special guest, Archbishop Hambidge. The word “Stewardship” was never used only the words Gathering and Faith. Instead of a sermon on October 18th, we used puzzle pieces made by another member of the Committee – Val Krause. The puzzle pieces spelled out FAITH – each letter being a different colour, and we gave the congregation a piece of the puzzle letter. We asked them to divide into 5 groups dependent on the colour of the puzzle piece they were given. The goal in each group using the 5 suggested prompts, ie. (F) – Following, Food, Family, Fellowship, Faithful –was to develop ideas on how we can as a congregation and as individuals put our faith into action with the larger community. At the end of the group discussions, one person from each group presented their letter and their groups work to the congregation. This exercise turned out to be extremely successful and the congregation participation was exciting.

On Saturday, October 24 the parish was invited to take part in a Parish Mission (this was part 1 of a 2 day series) led by Archbishop Hambidge from 9-2 with a lunch break in between. The Mission was well attended by the parish and we had lots of fun listening to Archbishop Hambidge talk about the “S-word” without mentioning it as we examined what our faith meant to us in living out the Gospel message and our connection to St. Stephen’s in that regard. Archbishop Hambidge guided us through this theme with stories (as only he can tell), some thought provoking ideas – for example:  “What is God Calling us to do?” – and how do we take this into our neighbourhood and homes. There were also several group discussions where parishioners were asked to answer specific questions about how they saw themselves living out their faith at St. Stephen’s and in the greater community.

On Sunday, October 25th Archbishop Hambidge joined us again and he preached a sermon on Jesus Feeding the 5000, and what we can learn. The point of his sermon was that “Little is much when God is in it, and when we relinquish hold on whatever God has given us, God will use these things to create the extraordinary things. The service was followed by a potluck lunch and Birthday Cake.

The Parish of St. Stephen the Martyr is very thankful to the Archbishop for giving us his weekend time and making our Gathering 2015 memorable.