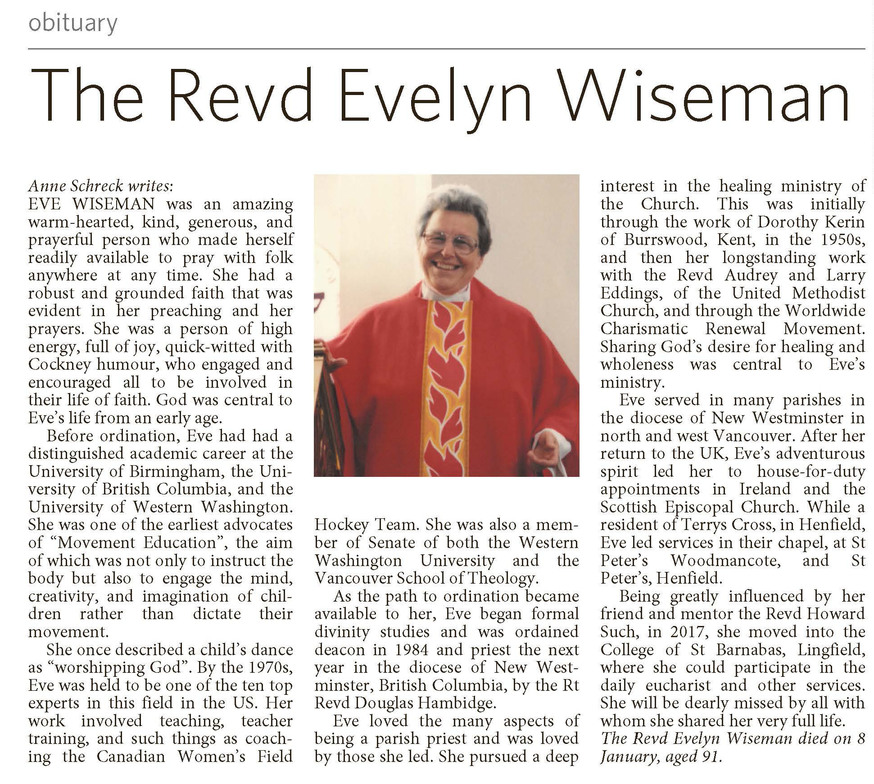 Eve Wiseman was an amazing warm-hearted, kind, generous, and prayerful person who made herself readily available to pray with folk anywhere at any time. She had a robust and grounded faith that was evident in her preaching and her prayers. She was a person of high energy, full of joy, quick-witted with Cockney humour, who engaged and encouraged all to be involved in their life of faith. God was central to Eve’s life from an early age.

Before ordination, Eve had had a distinguished academic career at the University of Birmingham, the University of British Columbia, and the University of Western Washington. She was one of the earliest advocates of “Movement Education”, the aim of which was not only to instruct the body but also to engage the mind, creativity, and imagination of children rather than dictate their movement.

She once described a child’s dance as “worshipping God”. By the 1970s, Eve was held to be one of the ten top experts in this field in the US. Her work involved teaching, teacher training, and such things as coach-ing the Canadian Women’s Field Hockey Team. She was also a member of Senate of both the Western Washington University and the Vancouver School of Theology.

As the path to ordination became available to her, Eve began formal divinity studies and was ordained deacon in 1984 and priest the next year in the diocese of New Westminster, British Columbia, by the Rt Revd Douglas Hambidge.

Eve loved the many aspects of being a parish priest and was loved by those she led. She pursued a deep interest in the healing ministry of the Church. This was initially through the work of Dorothy Kerin of Burrswood, Kent, in the 1950s, and then her longstanding work with the Revd Audrey and Larry Eddings, of the United Methodist Church, and through the Worldwide Charismatic Renewal Movement. Sharing God’s desire for healing and wholeness was central to Eve’s ministry.

Eve served in many parishes in the diocese of New Westminster in north and west Vancouver. After her return to the UK, Eve’s adventurous spirit led her to house-for-duty appointments in Ireland and the Scottish Episcopal Church. While a resident of Terrys Cross, in Henfield, Eve led services in their chapel, at St Peter’s Woodmancote, and St Peter’s, Henfield.

Being greatly influenced by her friend and mentor the Revd Howard Such, in 2017, she moved into the College of St Barnabas, Lingfield, where she could participate in the daily eucharist and other services. She will be dearly missed by all with whom she shared her very full life.

The Reverend Eve Wiseman's obit published on this website here.