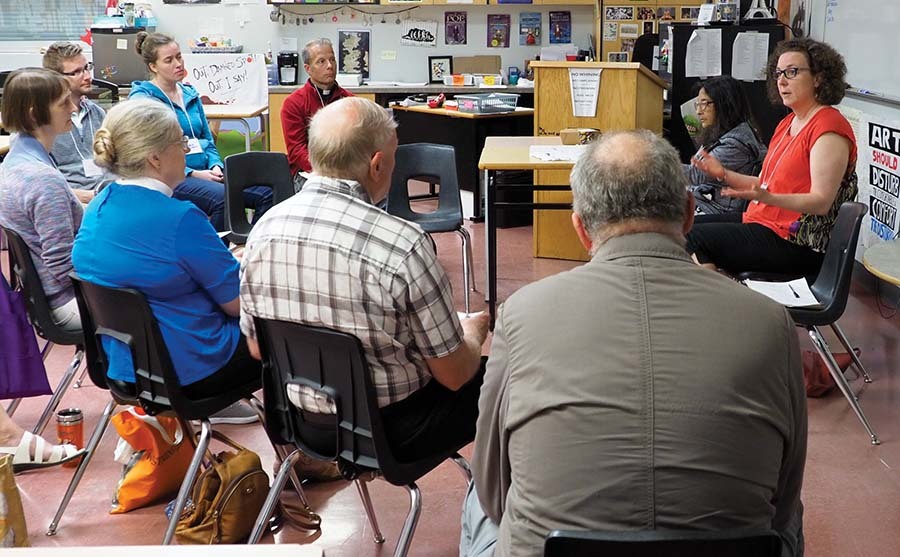 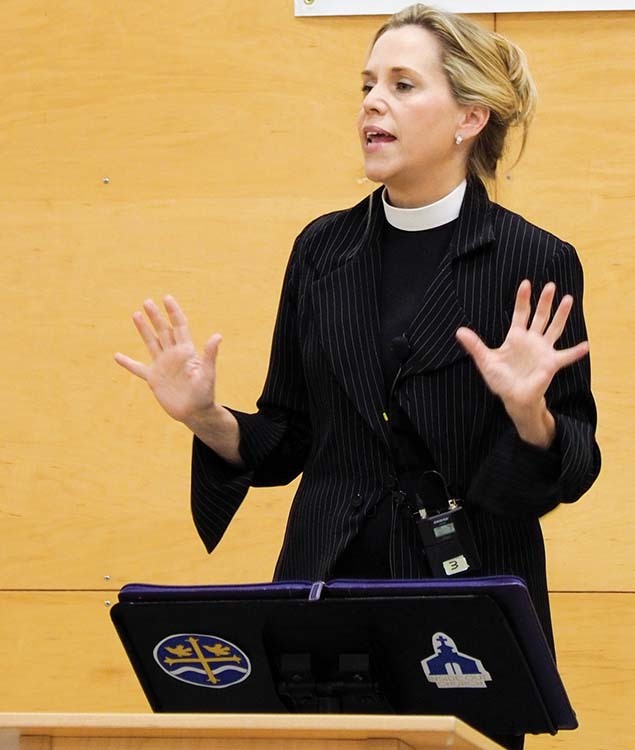 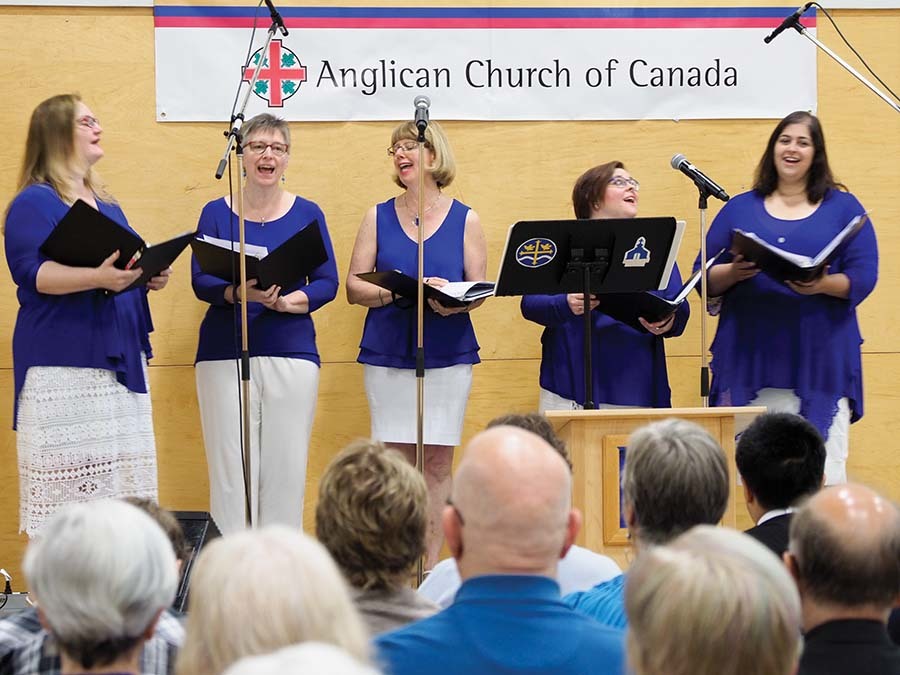 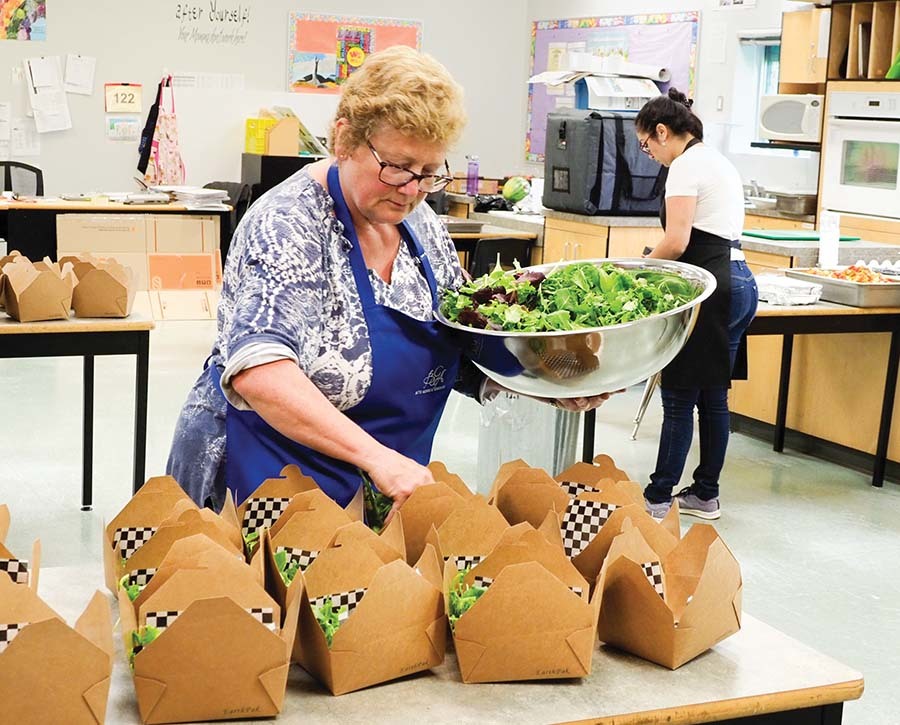 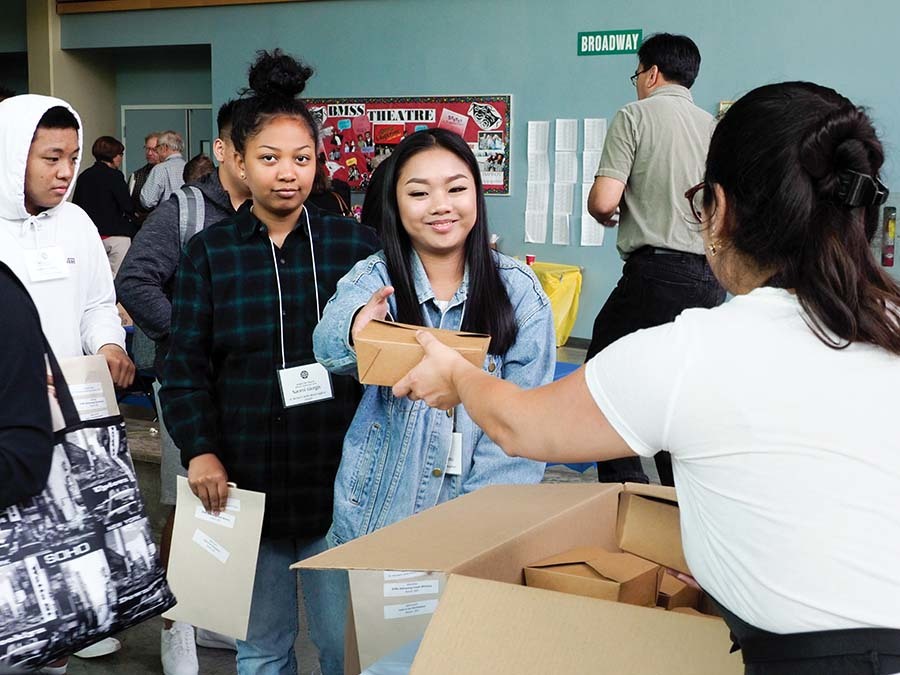 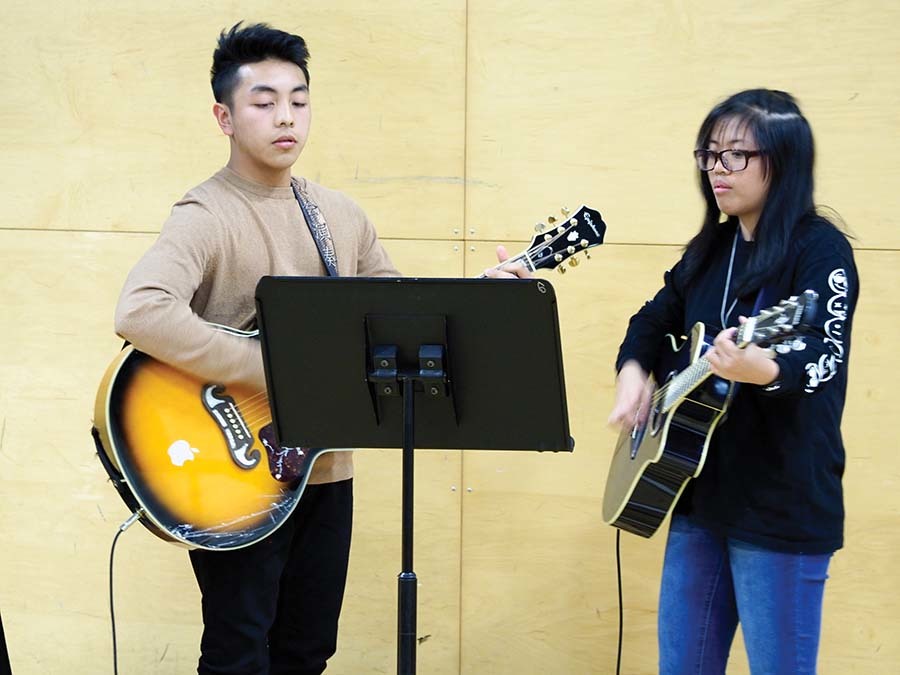 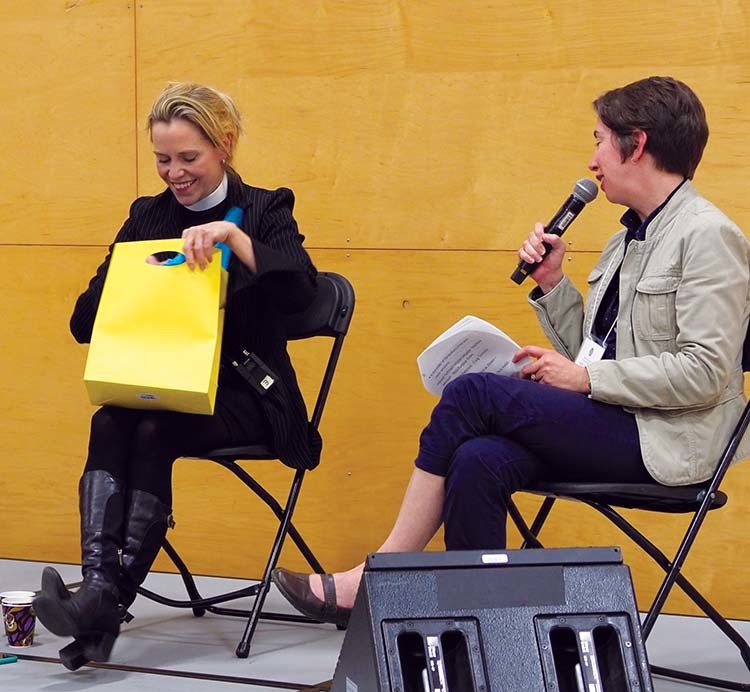 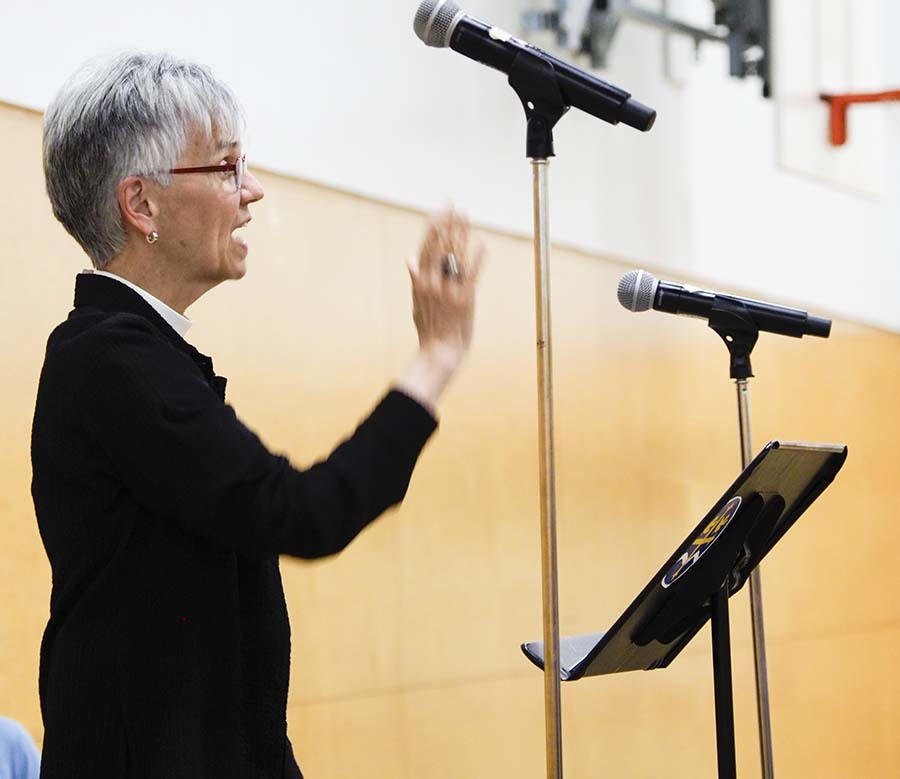 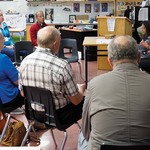 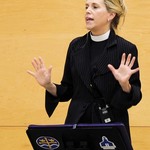 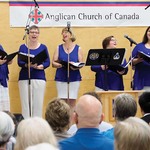 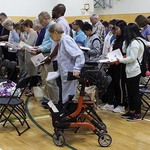 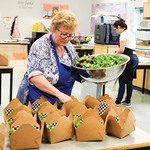 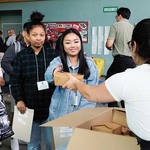 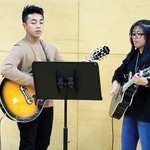 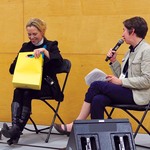 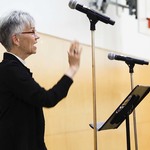 This year’s mission conference, Inside Out Church, which took place Saturday, May 26, marked the second time in recent history that our diocese has gathered, not for the usual business of Diocesan Synod, but for a different kind of gathering. Following the 2015 reorganization, Diocesan Synod moved to a two-year cycle with the proviso that an annual mission conference would be held on the off years. A gathering open not just to members of Synod, but to everyone, we gather for the sake of the Good News. Mission is all about Good News, more specifically the Good News of God in Christ. The 2018 mission conference was Good News in and of itself as this new, diocesan event continues to grow and develop into an important part of our life together.

Overview of the Day

Bright and early, approximately 220 clergy and lay from across the diocese arrived at Burnaby Mountain Secondary School. The day began with the usual flurry of activity that accompanies the beginning of such church events; volunteers helping to get everyone registered and oriented , people greeting each other and chatting, groggy faces looking hopefully for caffeine to wake them up.

The opening protocol was led by a member of the Sḵwx̱wú7mesh (Squamish) Nation who welcomed us to the territory and offered a song. Two of the children present were excited because they recognized the song from learning about First Nations in school. Morning Prayer followed and included musical leadership by St John’s North Vancouver’s Choir-To-Go and The Guitar Group from St Michael’s Multicultural Church in Vancouver. Three people offered reflections on the morning’s Gospel Reading Mark 10: 13-16, about Jesus and the children. Then we were off to the races with our first plenary session from keynote speaker the Reverend Lillian Daniel, speaker, author and leader of First Congregational Church in Dubuque, Iowa.

(Her bio can be found here)

The keynote was an engaging exploration of material from Daniel’s books: Tell It Like It Is: Reclaiming the Practice of Testimony, When “Spiritual, but not Religious is not Enough”: Seeing God in Surprising Places, Even the Church, and Tired of Apologizing for a Church I Don't Belong To: Spirituality Without Stereotypes, Religion Without Ranting. Daniel explored some of the roadblocks that mainline Christians face when we speak about our faith and the Church.

Following the morning plenary, participants went off to their choice of 9 different workshops. Many of the workshops were led by clergy and lay people of the diocese speaking about a particular ministry in which they are involved. For example, the Rev. Peter Smyth, Senior Port Chaplain spoke about the Mission to Seafarers, and Interim Indigenous Justice Ministry Coordinator, Jerry Adams, spoke about the recent Reconciliation Feast held at St James’ September 23, 2017. It was exciting to see that many of the workshops had a full house and discussions were lively around the chosen subjects.

As always, one of the highlights of the day for many people was lunch, provided by the diocese’s own Bette Geddes. Bette and her team provided delicious packed lunches – the lemon squares for dessert were a treat. The lunches were also remarkable for their commitment to avoiding sending garbage to landfill. Salal and Cedar posted on their Facebook page about them saying, “Way to go Diocese of New Westminster for the fully compostable lunch containers.”

The afternoon began back in plenary with a chance for the keynote speaker to answer some questions about her presentation. The questions were submitted by participants on cards ahead of time and the session was facilitated by the emcees for the day, the Reverends Kelly Duncan and David Edgerton. Daniel’s responses to the questions were as engaging as her presentation in the morning and she answered with thought, wit and compassion. One question asked about how one can engage in mission when a congregation is in conflict or in the midst of one’s own personal doubts. Daniel stressed the importance of congregations addressing conflict and problematic behaviour directly, and that avoiding this difficult work is a barrier to engaging with new comers.

Following the question and answer session it was back to workshops for the rest of the afternoon. One of the afternoon workshops was an opportunity for people hear the Rev.  Dr. Tellison Glover, the diocesan Director for Mission and Ministry Development who began his ministry here January 16, 2018, share his vision about his role in our diocese.

The day concluded with closing worship in the style of the Iona Community – an ecumenical community based in Iona, Scotland, with members in many different parts of the world. The service was from ‘A Wee Worship Book’, which was produced by the worship group in the late 1990s. With Inside Out Church concluded, participants filled out feedback forms and left them for the next group who will organize this event again when it is held in 2020.

It is almost a cliché to begin any exploration of mission in Anglican circles with an observation about how uncomfortable the word ‘mission’ makes Anglicans. There is good reason why it does make us uncomfortable; Anglican missionaries accompanied British colonial expansion all over the world and in many cases the work of spreading the Good News of Jesus Christ took a back seat to the work of claiming territory, wealth and power for the British crown and those closest to it at the expense of many, many others. Any time Anglicans gather for the sake of mission, this history is a part of our context – whether we acknowledge it or not.

This year’s Keynote speaker, the Reverend Dr. Lillian Daniel, acknowledged the complicated and uncomfortable relationship that many Anglicans have with mission right from the start and its basis in a fear of engaging in mission in a way that is triumphant and judgemental and has in many cases caused harm. Daniel presented an approach to mission that has our own personal experiences of God as its starting point. This approach doesn’t deny or ignore that the Church and Christians have caused real harm to many people, nor does it negate our need to deal with these realities as a Church. But Daniel encourages us not to make this affect the way we begin any conversation about the Church. Instead, we are invited to start with how we have been transformed, the faith we have and the community that is a part of that process.

Daniel also spoke about the Church’s engagement with those referred to as ‘nones’ (people who don’t identify as belonging to any particular religion). She spoke about 4 categories of ‘nones’: the no ways, the no longers, the never haves and the not yets.

Each of these groups have their own characteristics:

Daniel identified that these last two groups generally include younger people who are often the children of those in the first two groups.

Reactions to Daniel’s keynote all mentioned how engaging, intelligent and hilarious a speaker she is. Her style was appreciated given how much of the day was devoted to her speaking. The ideas she presented were generally received positively, with some reservations. Many of the participants I spoke to were under 45 and while they appreciated her exploration of the 4 different kinds of ‘nones’, they were already quite familiar with these different realities among those who profess no religion, in many cases because their friends, peers, coworkers, family members and maybe at one time they themselves are a part of these groups. Others were concerned that Daniel’s exhortation that we don’t need to begin all conversations about the Church and our faith with apologies, would be misinterpreted as a claim that the Church doesn’t need to apologize for the harm it causes or that the time for apologies is over. As a Church engaged in the complicated work of reconciliation with Indigenous people, for example, apologies are still an important aspect of this work.

The various reactions to the keynote speaker were typical of the reactions to the day as a whole. Many people celebrated and enjoyed the presence of children and an even larger cohort of teenagers, many from St Michael’s, Vancouver, but though the day was billed as an ‘all ages’ event, the programming did not take into the account the needs, interests or experiences of children and youth. Similarly, many people identified that the location of this year’s event was much more accessible by transit than the first mission conference held in 2016 at the Musqueam Cultural Centre in the southernmost part of Vancouver, but those arriving on foot from the Skytrain station were left guessing where to go as there was no signage leading them to the right entrance and the acoustics of a school gym were a challenge for many people.

An annual mission conference is an event that is still very new. People have all kinds of different expectations for what it will be and any group organizing the event has to manage all these expectations and do what is possible given the time and resources available. The group who planned this year’s mission conference as well as the wider group of volunteers and workshop leaders who made it happen, are to be commended for their hard work and the steps they have made in establishing this as a wonderful, educational, community event in the life of our diocese. This is an event that is growing and developing and with some feedback from participants, the next one in two years will be even better.

More photos with captions available at Anglican Conversation the Facebook page of the diocese of New Westminster.