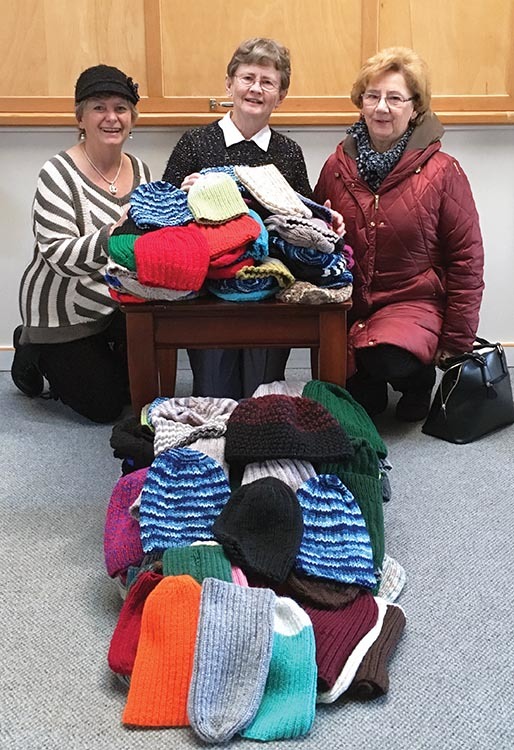 Many thanks to Pam Tattersfield of St. John the Divine, Squamish for setting up this great photo of knitters: Carol Grolman, Lou Remple and Anne Barnes. Others who made toques are: Muriel Shephard, Arlene Ingraham, Sue Puchmayr, Barbara Stover and Elaine Graham.

For thirty years, members of Squamish United Church have knitted toques to be distributed during the Christmas season to folks who visit the compassionate service ministries of First United Church located on Vancouver's Downtown Eastside. For 2018 some knitters who are members of St. John's helped out. According to Pam, "since toques were not on the list of wished-for-items from First United, it was decided that they (the 180 hand knit headwarmers) would be going to the Seafarers this year."

On December 5, after the initial publication of this news post, Pam contacted diocesan communications to inform us that Arlene Ingraham brought in 17 more toques that her mother, Leona had knit. This brings the total very close to 200. In addition to the update Pam added that "Leona is 100 years old and her needles still click!"

Part of the Mission to Seafarers (MtS) Christmas ministry is organizing the assembly of 300+ gift parcels to be distributed to seafarers anchored in various locations around the ports, bays and inlets of Vancouver. The seafareres are far from home and family at Christmastime.

As of this writing, we do not know what the plans are for the toques but be assured that this  bounty will be much appreciated by Senior Port Chaplain, the Reverend Peter Smyth and the ecumenical team at MtS.