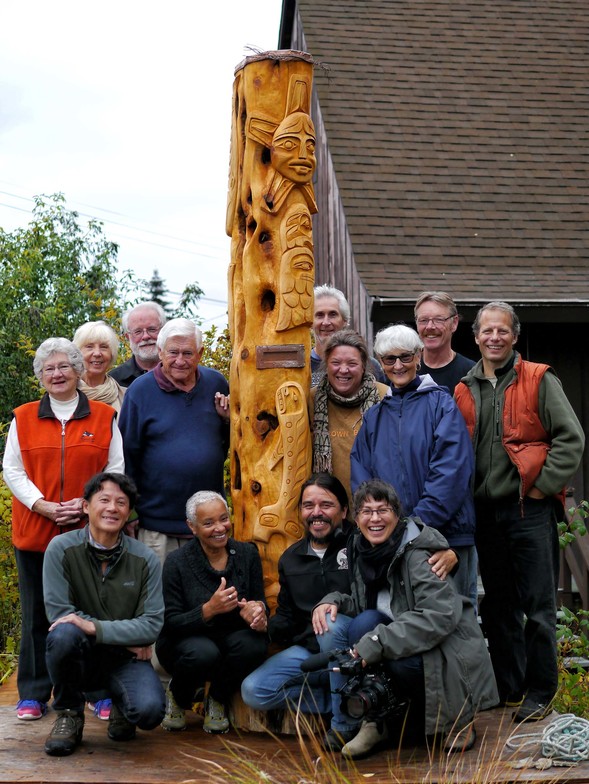 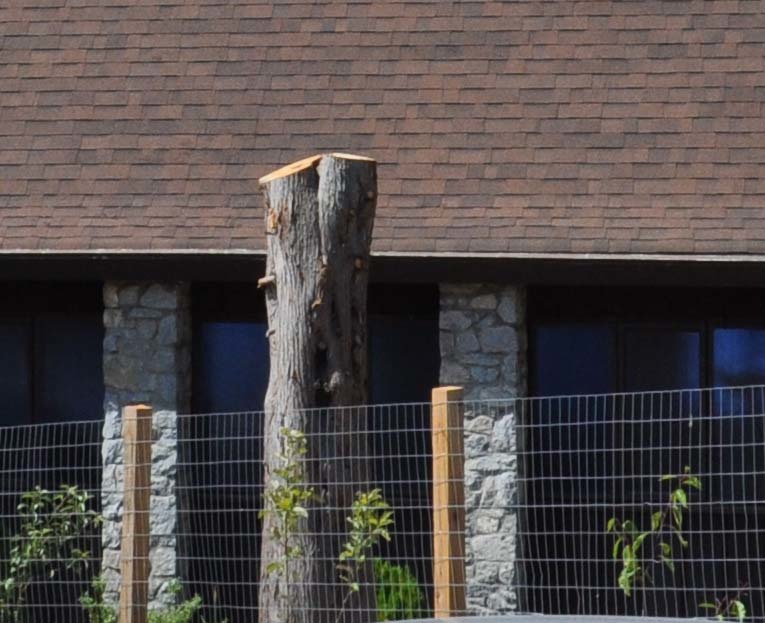 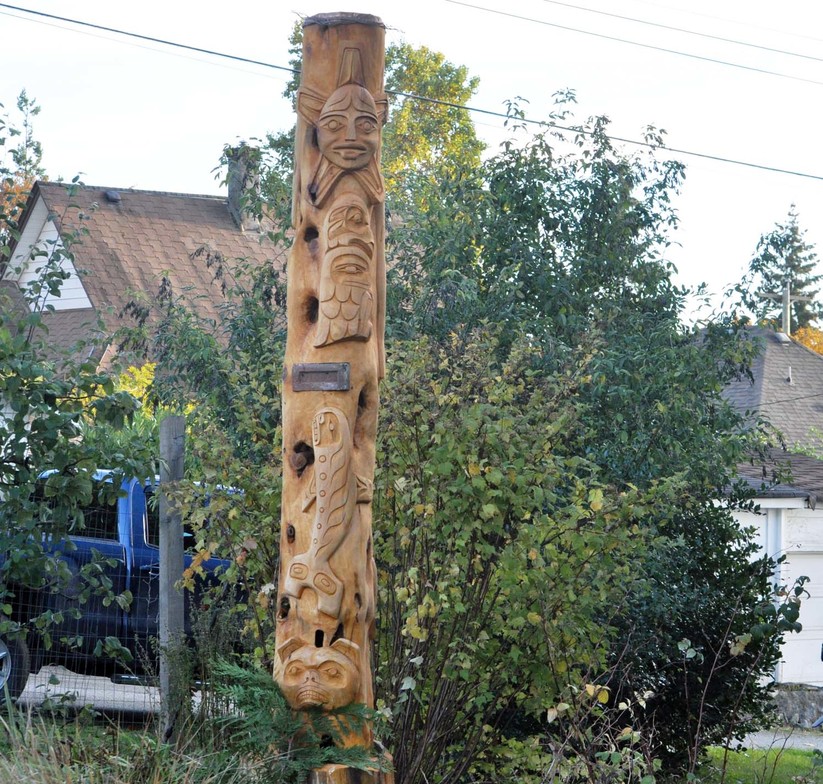 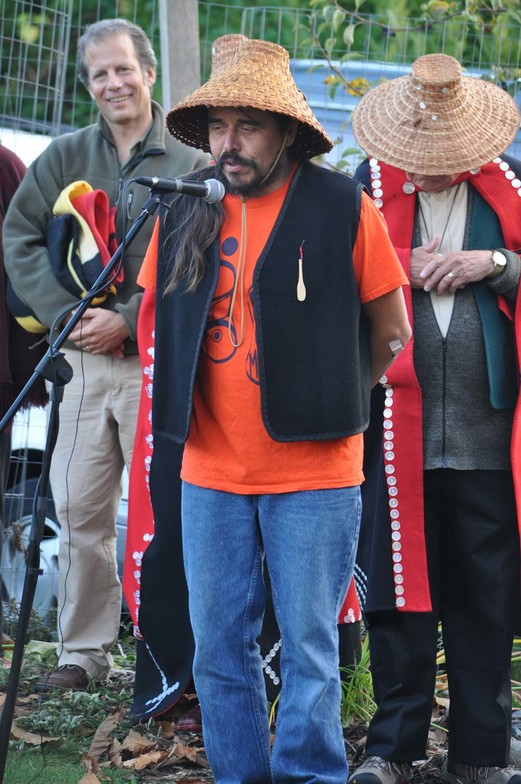 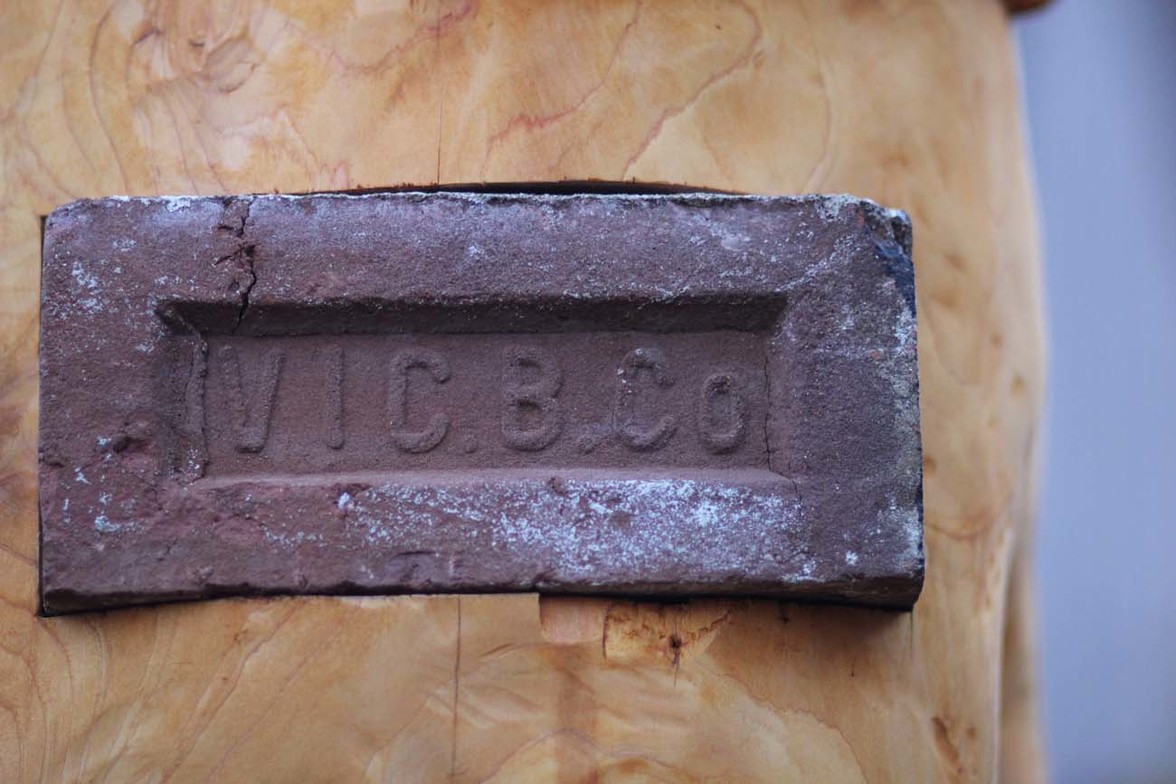 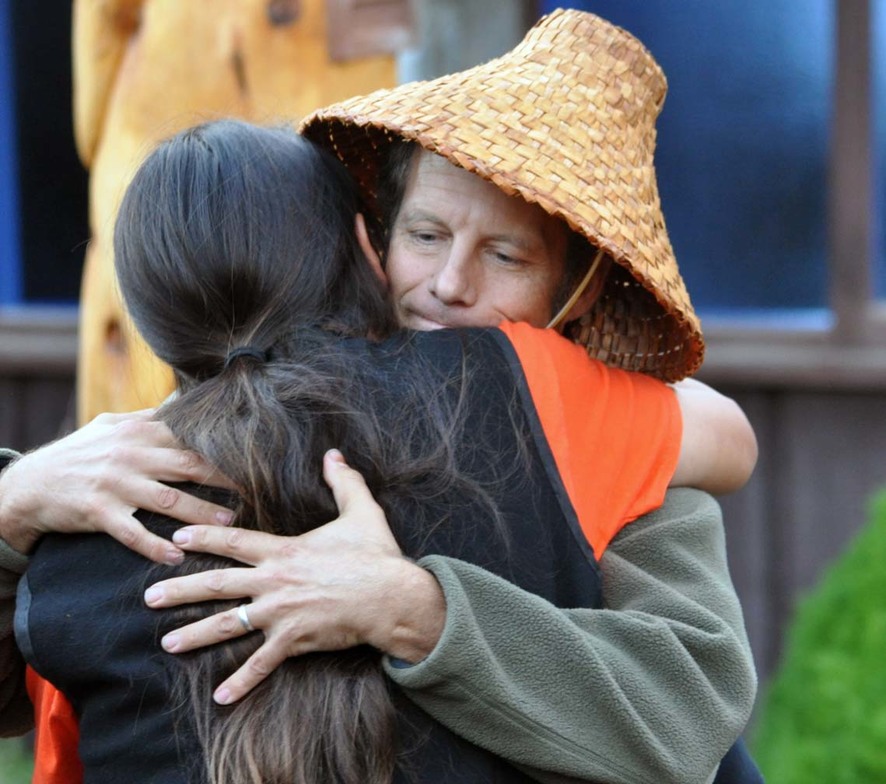 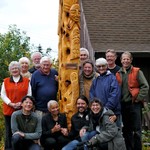 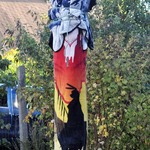 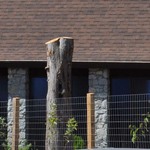 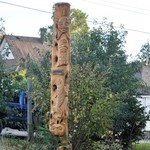 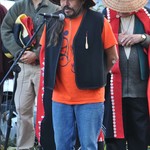 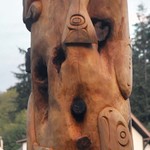 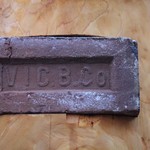 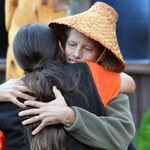 Early on in his October 20, 2015 address to a crowd of over 150 gathered in the Sycamore Commons Permaculture Garden, which is also the grounds of St. David and St. Paul Anglican Church in Powell River, BC, Heiltsuk First Nation artist (and long time Powell River resident) Ivan Rosypskye said “ a couple of months ago I got a call by this crazy guy about carving a stump.” That “crazy guy” was Ron Berezan, parishioner at St. David and St. Paul and also co-leader of the Sycamore Commons Permaculture Garden project, a partnership initiative with the parish since 2012, and for the last two years a recipient of funding from the diocesan flow through funding program care+share. The stump in question is the remainder of a 40 foot high Cypress tree that was chopped down a few years ago after the trunk began to split and rot.

Ivan is forthright about his feelings regarding the Anglican Church as his mother and his aunts are all survivors of the St. Michael’s, Alert Bay Residential School, which was devastating for his family. Imagine how he felt during that initial call when Ron told him that the stump was beside a church? However, Ivan was willing to listen and a meeting was arranged for August 6, 2015 at the garden. Present at the meeting were Ivan, Ron, the Reverend Paula Sampson an honorary assistant priest at St. David and St. Paul who is also an adopted member of the Nisga’a First Nation and four project volunteers. Ron said “I knew from that moment that this had the potential to be something special. Ivan shared his family story and connection to St Michael’s, some of his trepidation about carving at an Anglican Church, but also his desire to engage with us. Over the days and weeks, trust continued to grow, Ivan was welcomed warmly by the parish and was in turn very honest and open with parishioners and community members.”

At that August 6 meeting, Ivan asked everyone present to talk a bit about their vision for the project, so that he could get a sense of what he would actually carve on the stump. The Sun being on the top made perfect sense as a symbol of life giving warmth and energy, particularly as it would be looking over a garden. Ivan decided that the rest of the symbols would be animal spirits: the Eagle (sky); the Killer Whale (sea); the Bear (earth/forest) and he was thinking that he would like to carve a female image to symbolize how a garden sustains and provides us with food and nourishment. However, it is impossible to know what the wood surface for carving is going to be like before the bark is removed and once he’d removed the bark it was obvious that the large number of knotholes and large gaps would make it impossible to include the one larger female image that he had envisioned. Instead, Ivan carved salmon to represent sustenance and provision and there are five represented on the pole, the number of salmon species in the Pacific waters. There is a strong sense of motion in the art that Ivan created, the five salmon almost come alive as they swim upward around the holes and gaps in the pole.

There is of course another element in the carving and that is the imbedded brick from St. Michael’s Residential School. Ivan took his family to witness the demolition of St. Michael’s this past February and they took a brick from the rubble. It was wrapped in a blanket and kept at his sister’s home in the Lower Mainland. The idea to include the brick was not an idea that was present from the beginning but in Ron’s words “it gave such an incredible additional meaning to the power of the work”. About two thirds of the way through Ivan came up with the idea of including the brick into the carving and a friend suggested he embed it in the middle, a visual metaphor of "interruption". The Residential Schools had "interrupted" the flow of First Nation's culture and community in Canada. According to Ron “Claudia Medina (Claudia is a documentary filmmaker commissioned to produce a film about the carving process and the effect that it had on the people in the neighbourhood) was going to be in Vancouver and Ivan asked her to pick up the brick from his sister.”

Ivan had a lot of support during the time it took to complete the carving. He was attended by two assistant carvers, his close friend Phil Russell and Nansi Mckay. There was a great deal of support from the parish, and the folks on Sycamore street became involved, witnessing the work and supporting Ivan, offering food and friendship during the two months of creative work. (Work that was quite difficult. This was the first vertical pole carving that Ivan had ever attempted. Because the stump is live it couldn't be removed and laid horizontally which is the usual method for pole carving.)

The unveiling ceremony on October 20, 2015 began at 5pm. The Sycamore Commons Permaculture Garden was filled with more than 150 folks from the parish, the community and the Tla'Amin First Nation. Tla’ Amin traditional elder, John Louis who works for Tla’Amin Community Health as a men’s support worker had risen at 5am that day to source cedar boughs for the dedication and spiritual cleansing ceremony. The blankets were removed from the pole and Elder John swept the pole as a song was offered to the accompaniment of drumming. No filming or photography took place during this sacred ceremony.

Then there were many words said and gifts exchanged. Hearing Ivan share from his heart about the creation of this beautiful piece of art and what it meant to him was inspiring. There was an awareness and an understanding present at Sycamore Commons that evening that Ivan had done so much more than create a work of art, he had created a very powerful symbol of reconciliation and healing.

When asked, Ron Berezan had this to say about the financial assistance received from the diocese. “care+share made it possible to undertake many exciting initiatives in the Sycamore Commons Community Permaculture project - from planting more fruit trees, holding community workshops, creating a community composting facility, installing 1000 gallon rain barrels, to building a public labyrinth and most recently, of course, the carving of a 10ft tree stump that was left behind when the old cypress tree needed to be taken down. On the one hand, the funds have enabled us to honor Ivan Rosypskye’s work and talents but perhaps more importantly, the funds were the catalyst for a whole new set of relationships that have been established between St. David and St. Paul and the surrounding community, including our geographical neighbours, our First Nation neighbours and the land and ecology in which we live. Ivan’s great gift is another instance in which we are being called to identify as church in a broader, more inclusive and more compassionate way. We are impacting the community and the community is surely impacting us as well.”

Well said Ron and many thanks to you Ivan for your wonderful gift of this incredibly powerful symbol of reconciliation and healing.

There are more photos, captions and other information to be found on Anglican Converstion, the Facebook page of the Diocese of New Westminster.

An 11 minute film of the Unveiling Ceremony is available below.