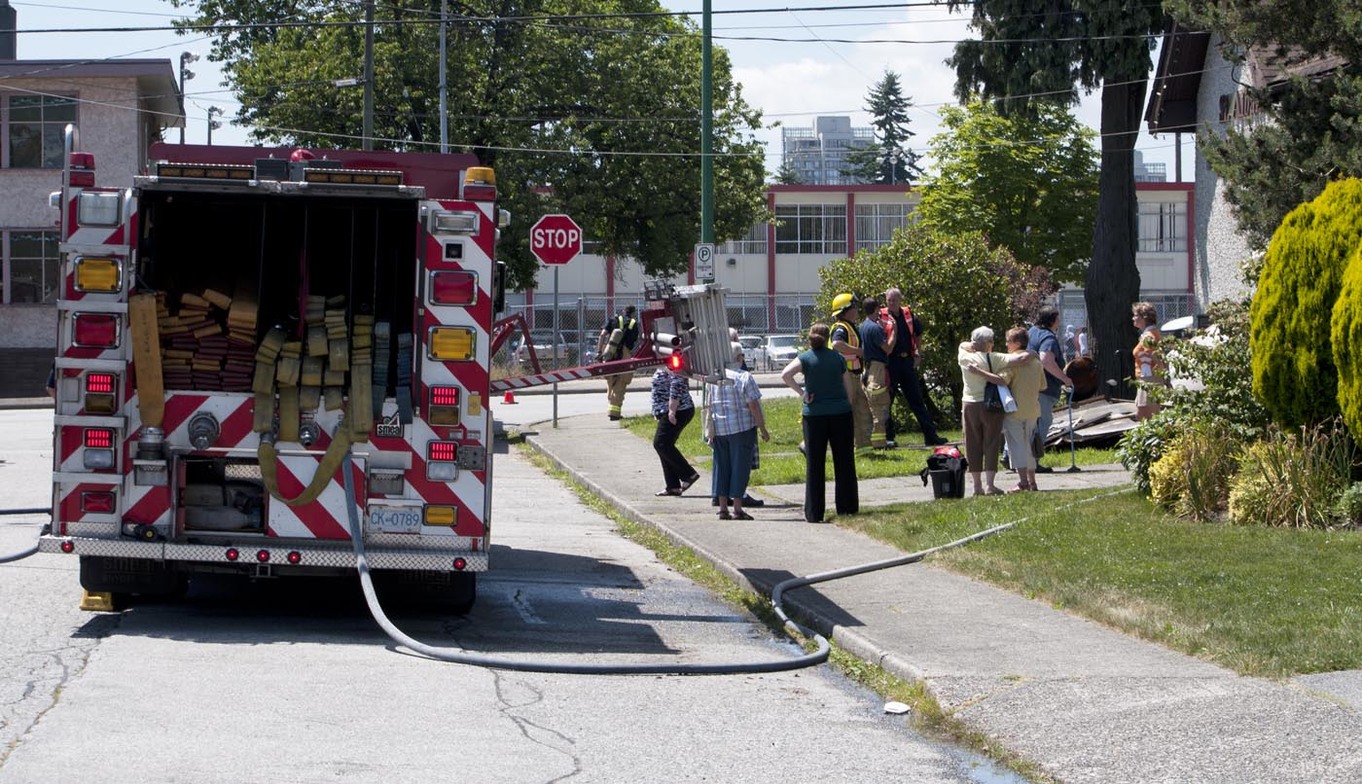 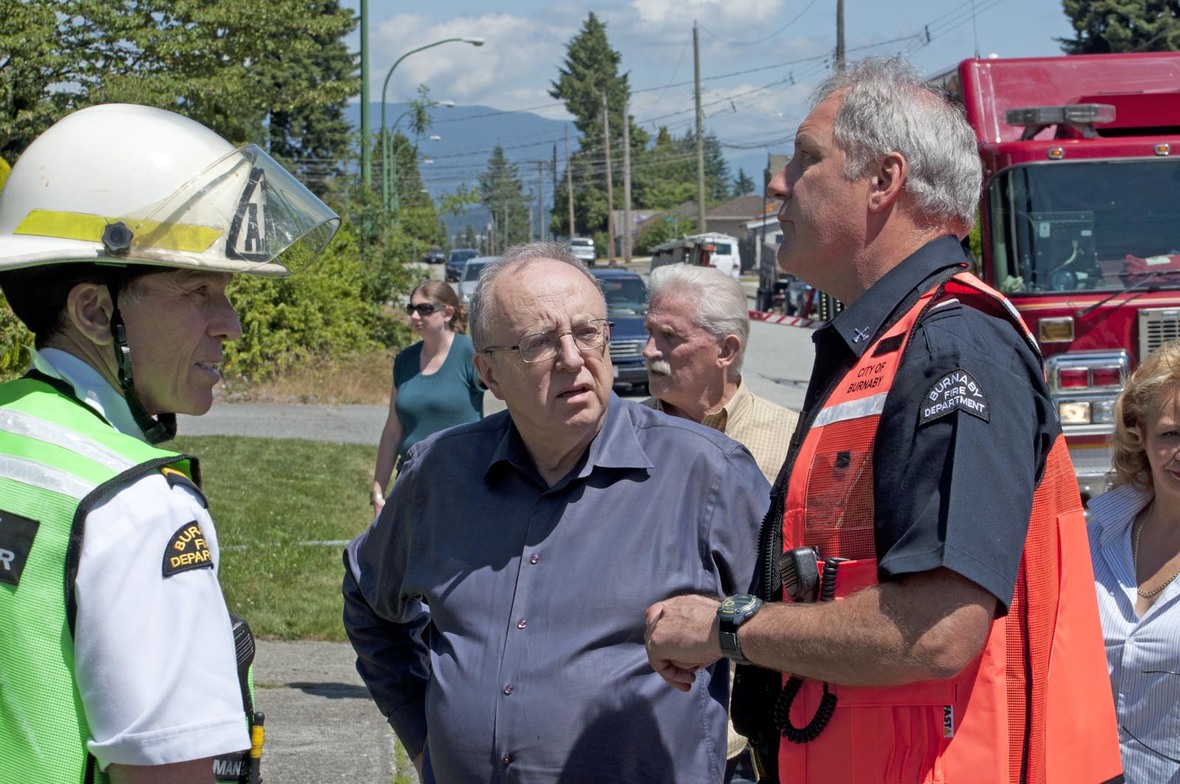 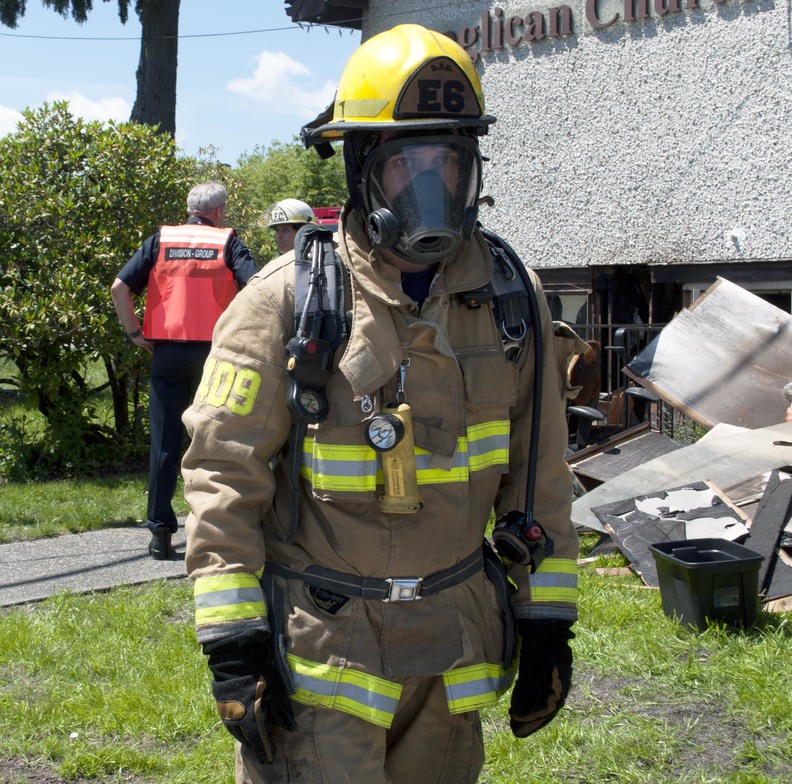 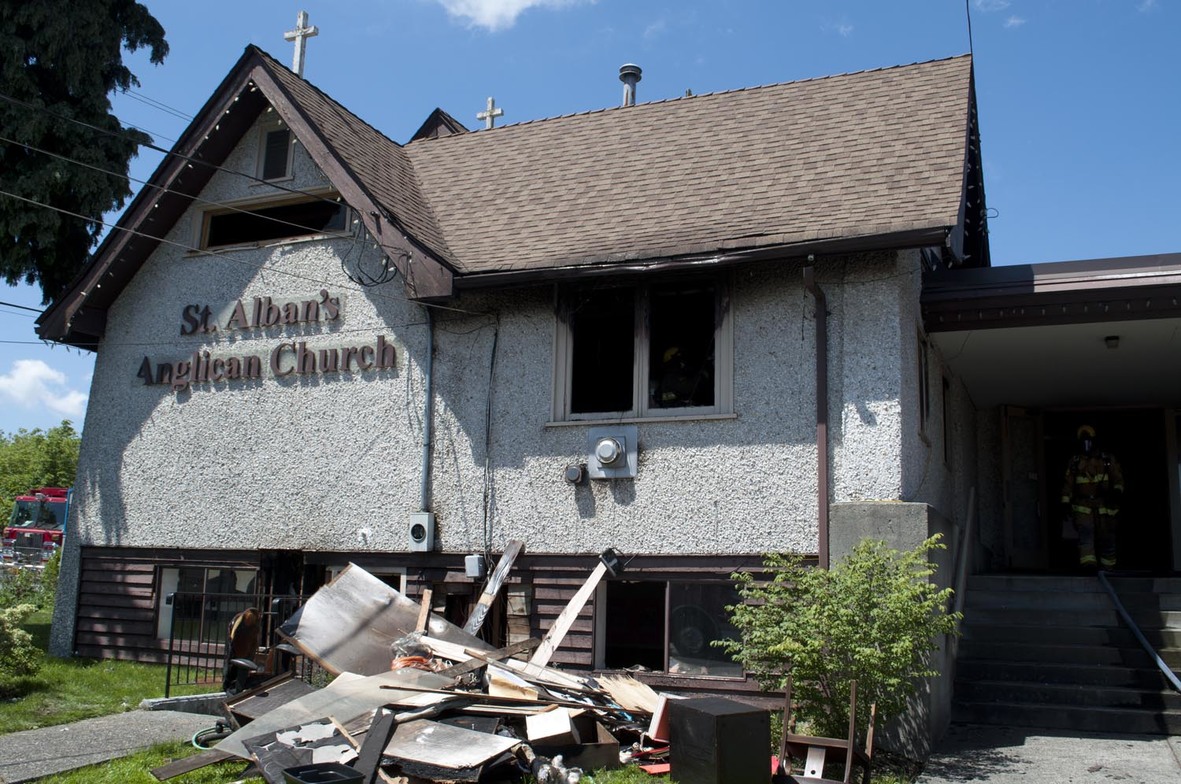 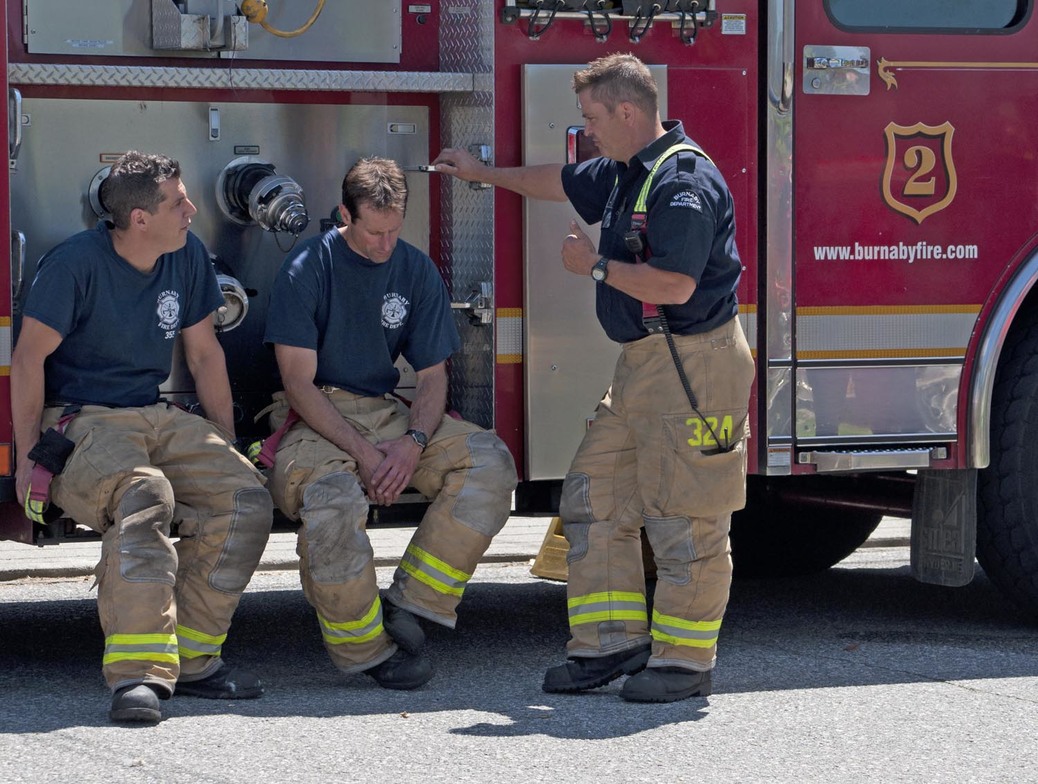 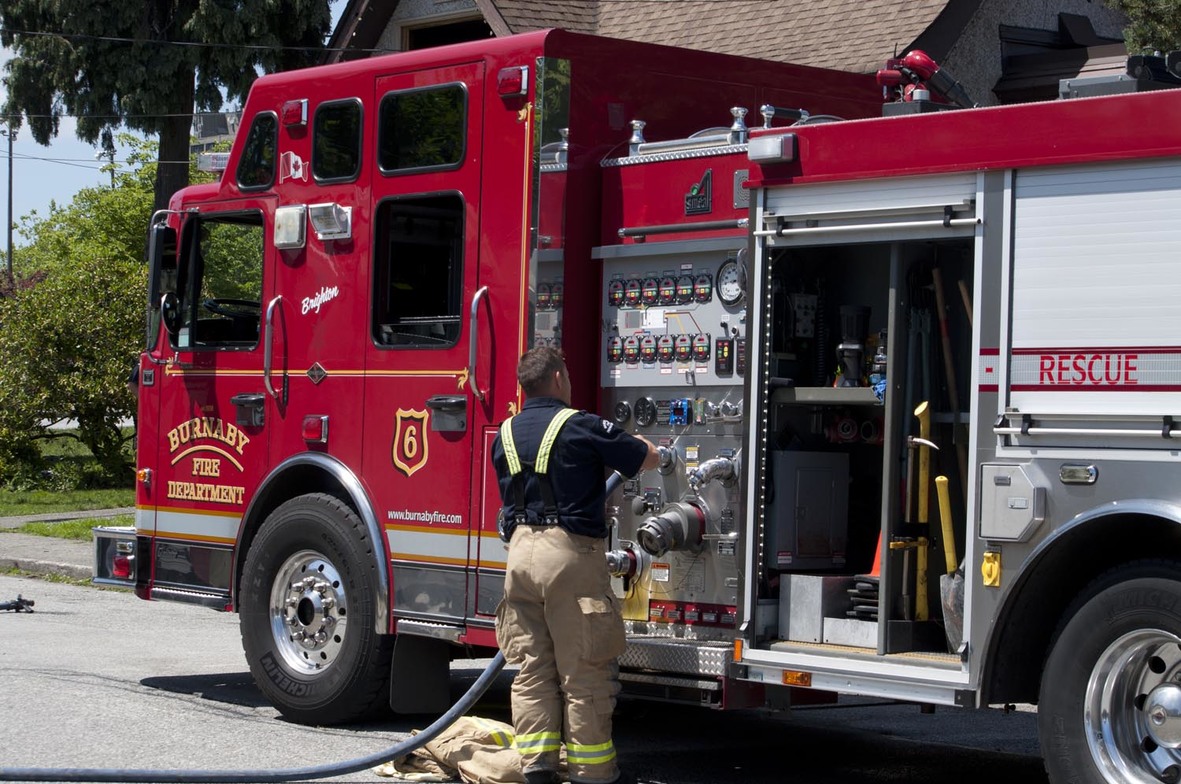 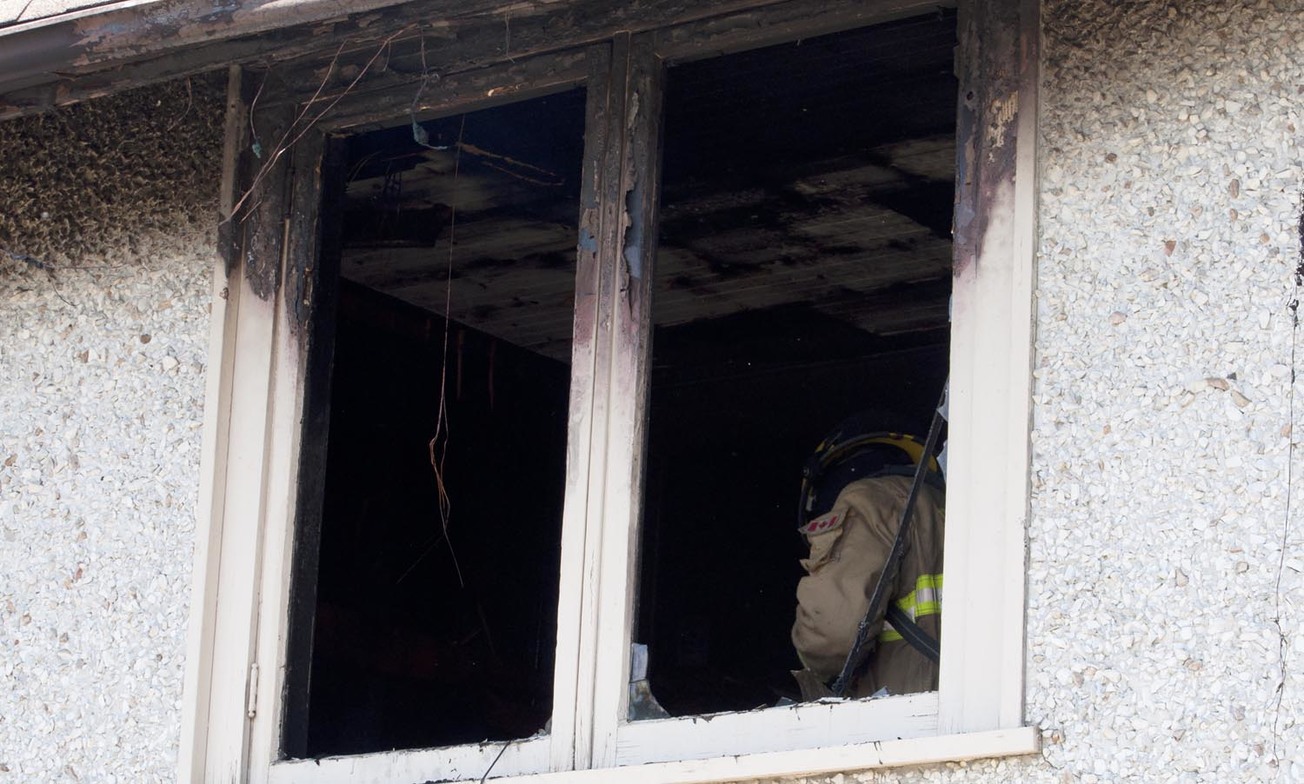 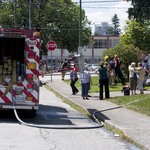 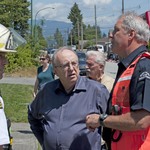 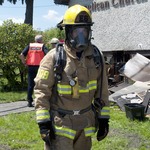 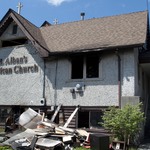 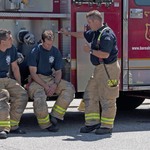 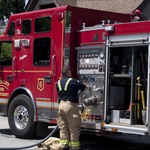 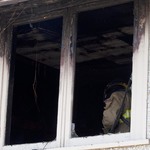 At approximately 10:30am on Thursday, June 11, 2015, a fire broke out in the rector's office located in the south end of the nearly 110 year old St. Alban the Martyr Anglican Church in South Burnaby.

Early and unsubstantiated reports are that an electric drill being used to install a new security system caused sparks in the wiring. The sparking quickly escalated into a full-fledged electrical fire and then accelerated to a two alarm blaze attended by four fully staffed City of Burnaby trucks and accompanying emergency vehicles.

Thanks to the quick work of first responders the fire was confined to approximately the first 20-25 feet of the south side of the original structure, from the rector's office through the chancel and altar area to the first pew in the nave.

According to Wanda Chow a reporter for the Burnaby Newsleader, one of the workers in the group present who detected the fire and called 911 was taken to hospital for smoke inhalation but there were no other injuries.

The Day Care facility that is resident on the property at the north end did not appear to suffer any damage, although smoke damage is always a concern. Once the fire was detected and the second alarm called in the youngsters at the daycare were evacuated to a neighbouring school.

St. Alban's incumbent, the Reverend Faun Harriman is also the Regional Dean of Royal City/South Burnaby Deanery and she was at the quarterly BARDDSS (Bishop, Archdeacons, Regionals Deans, Diocesan Dean and Senior Staff) meeting being held at St. David's in Tsawwassen. Faun did not have a car but when the emergency call came through, diocesan Director for Mission and Ministry Development, the Reverend Ruth Monette offered her services and the two of them departed for South Burnaby.

The blaze was pretty much extinguished by 12:25pm. By 1pm, the wardens, parish leaders, parishioners, the insurance adjustor and others from the neighbourhood had gathered on 19th Avenue surveying the damage. The first thing that really picqued the senses was the smell. It was an odd blend of burning wood, plastic, flame extinguishing foam and something else. Faun was quick to provide the information that there were over 40 bars of fragrant soap stored in her office as part of a parish fundraising initiative.

As the hoses were being put away on the trucks and the firefighters were peeling off the outer layers of protective coverings, one first responder remained in all his gear and took a chainsaw into the office. He made a few cuts into the ceiling area and smoke began to pour out of the fresh incisions. That appeared to be the final necessary piece of the fire fight as after that all of the equipment was removed, put on the trucks and the personnel prepared to return to the stations.

It is very early in the process and there will be more news to come about this story, however, In the afternoon of June 11, insurance adjustor, Garnett Oliver arranged for restoration contractors to arrive on the scene, board up the windows and other gaps in the building fabric to make the property as secure as possible and also set up water retraction machines to begin the long process of mitigating the damage.

On the morning of Friday, June 12, Mr. Oliver was joined on the site by an engineer who had a good look at the damage and estimated the cost at between $250 and 300 thousand dollars. Once the work begins, this estimate may change. The damaged area of the building will be isolated and the remaining areas which include; most of the nave (the part of the church where the congregation is seated), the hall and the daycare location will be cleaned up as quickly as possible so that they can be up and running within 10 days to 2 weeks. The early prediction of 3-4 months for the duration of the repair was reinforced by Mr. Oliver. The major reconstruction and restoration work will be put out to tender. Mr. Oliver also confirmed that the proprietors of the St. Alban's Daycare have their own coverage and have been in touch with their insurance providers.

On Sunday, June 14, the St. Alban's, Burnaby parish will join with Holy Trinity Cathedral, New Westminster for worship at 8 and 10am and the Reverend Faun Harriman will be the preacher. More information about where the parish will worship in the future will be communicated as it becomes available.

So please send your thoughts and prayers to the Reverend Faun Harriman and the St. Alban's family and add some grateful prayers for the great work of first responders who do their jobs with skill, courage and commitment.