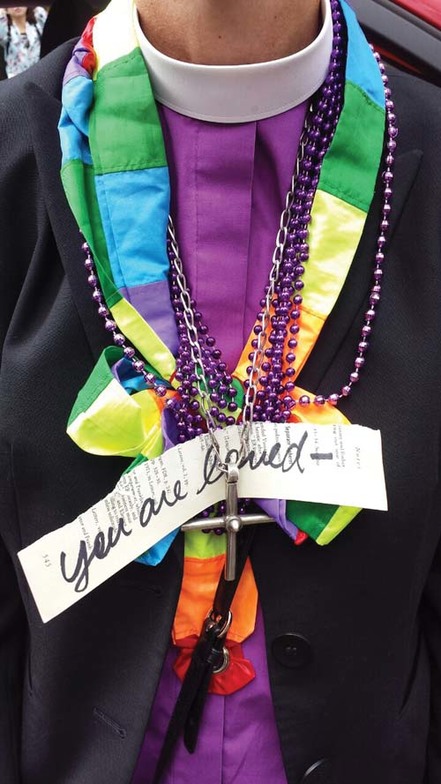 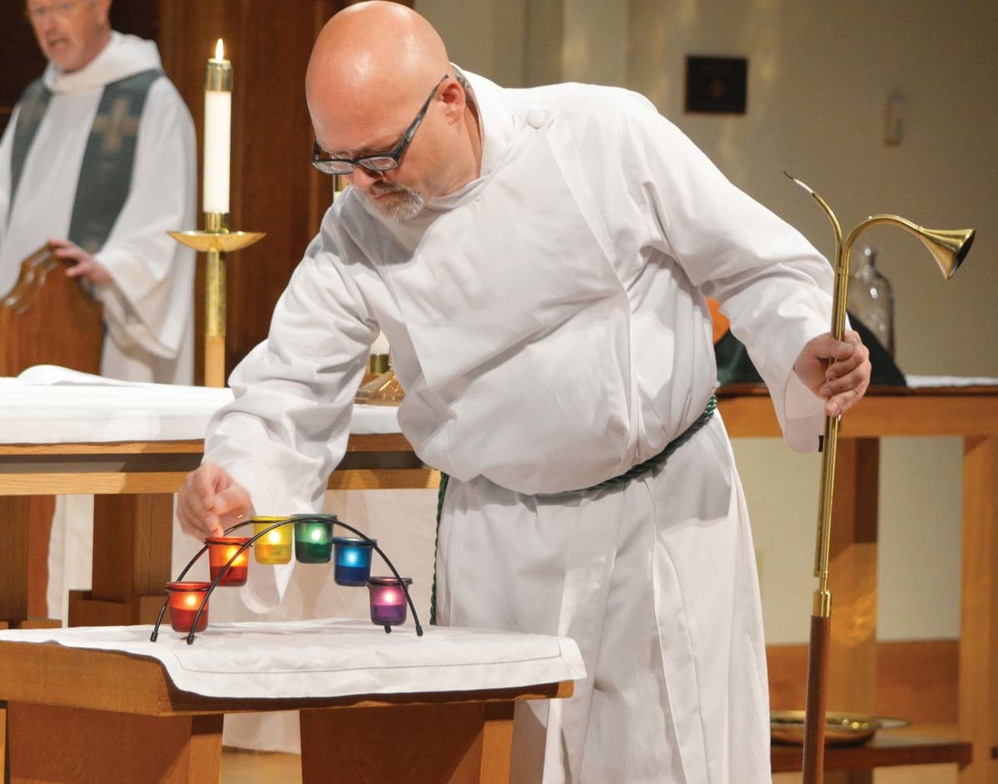 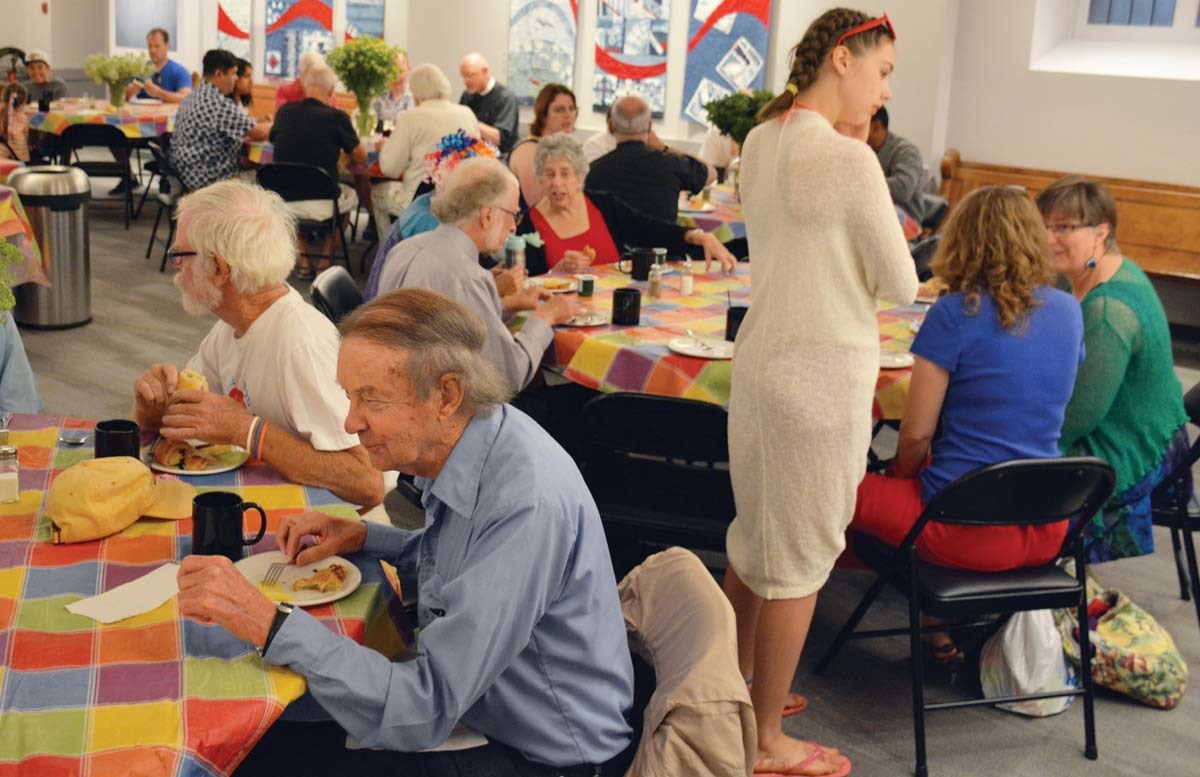 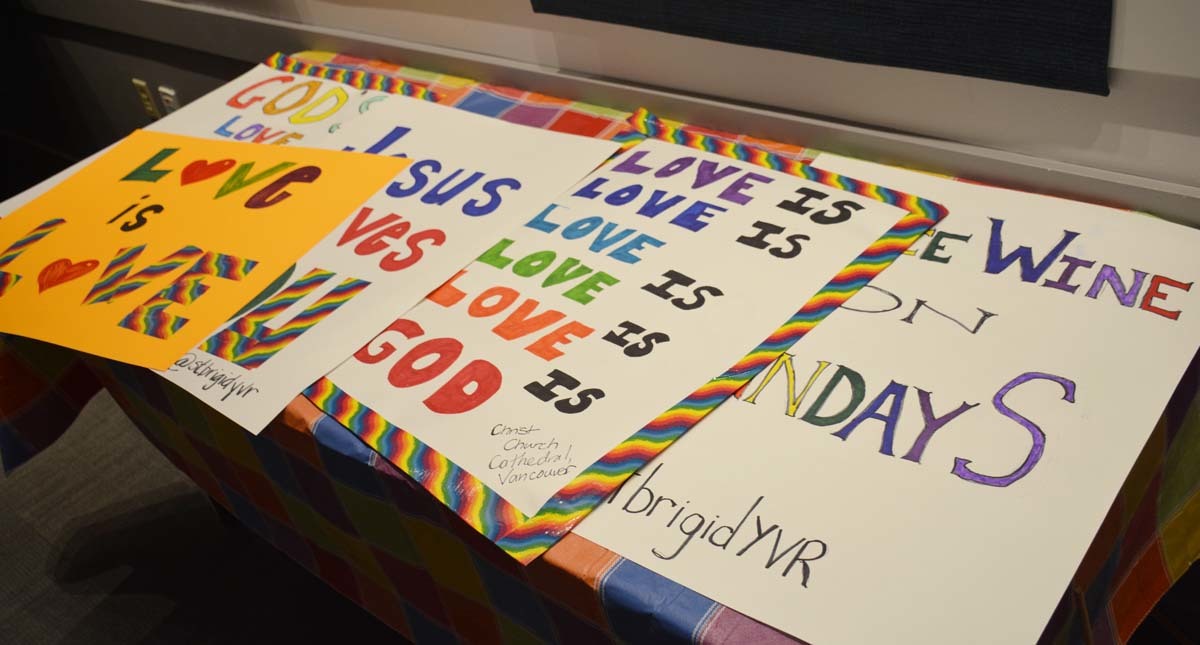 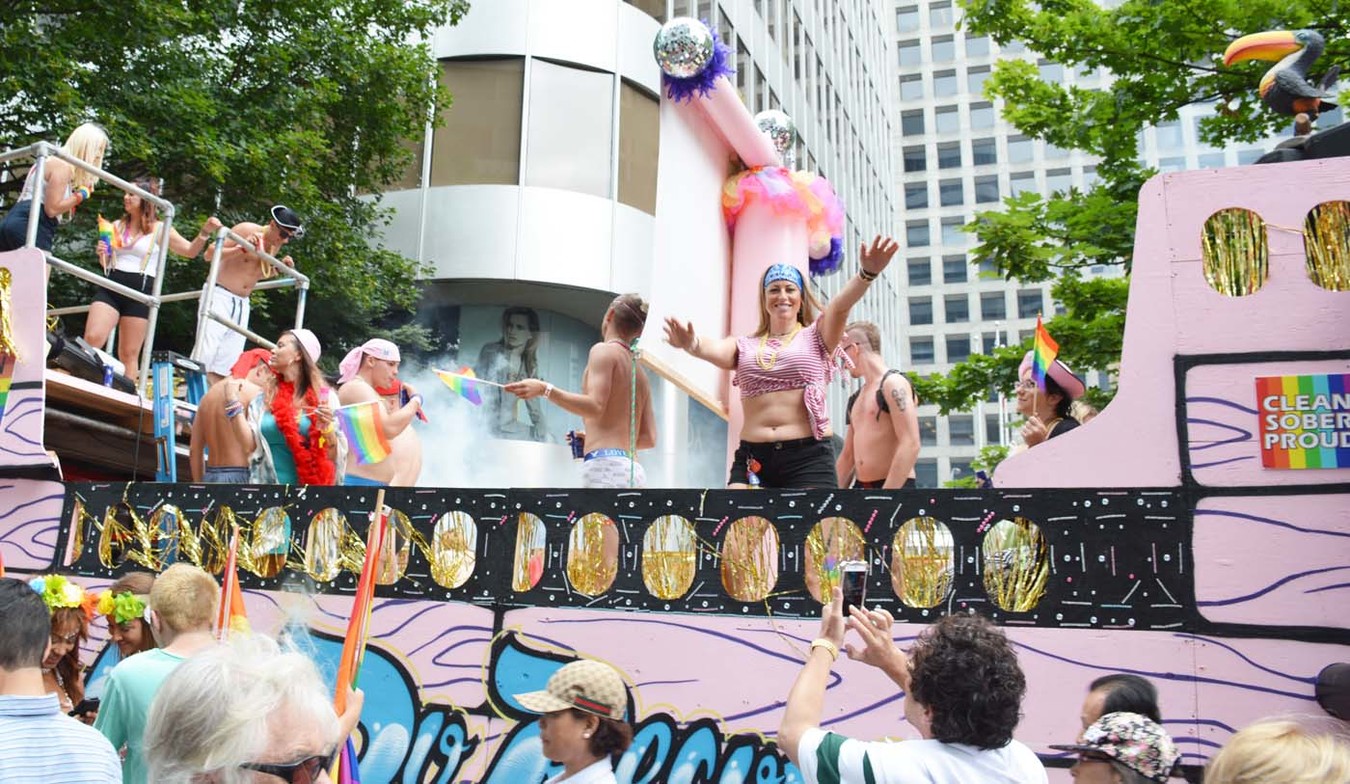 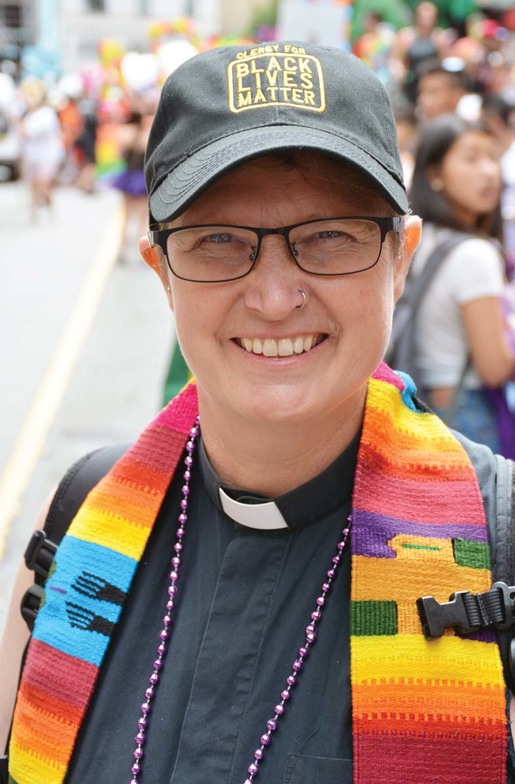 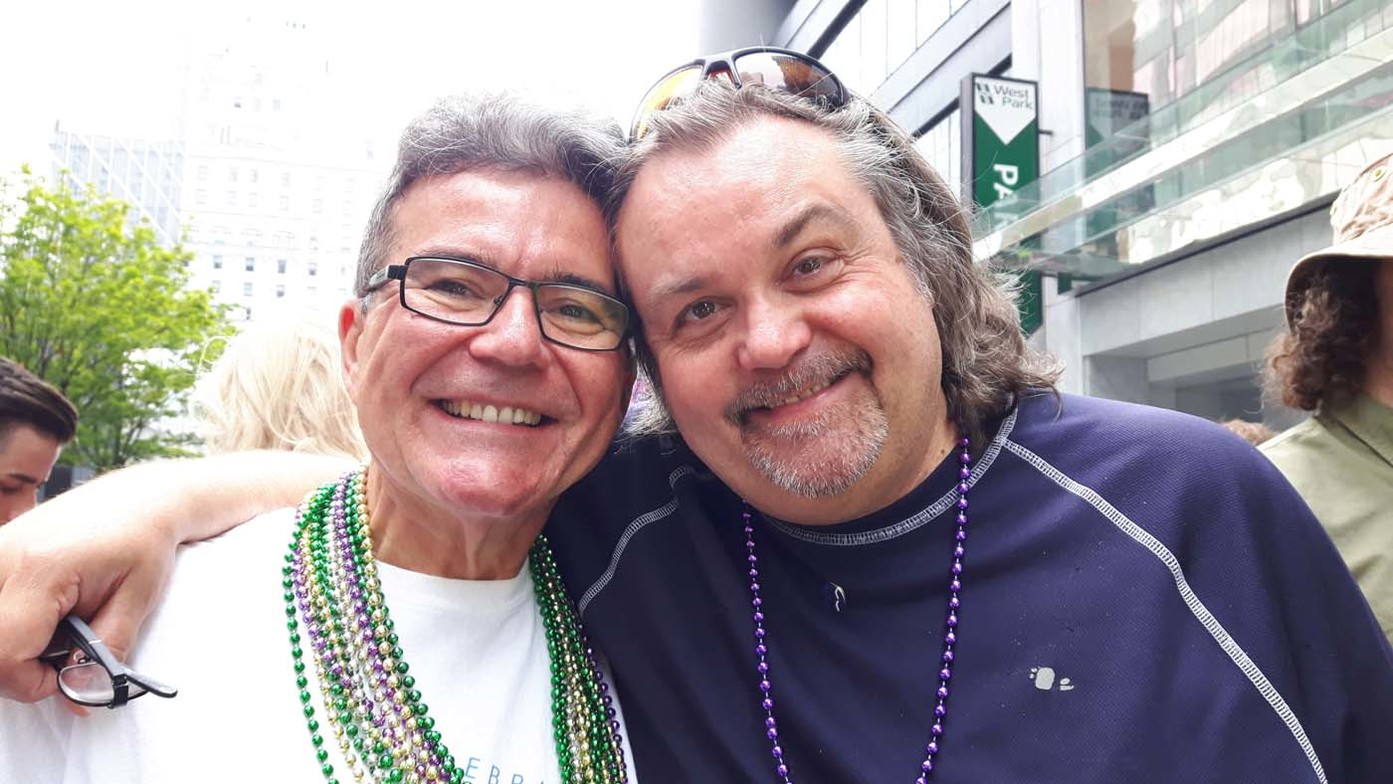 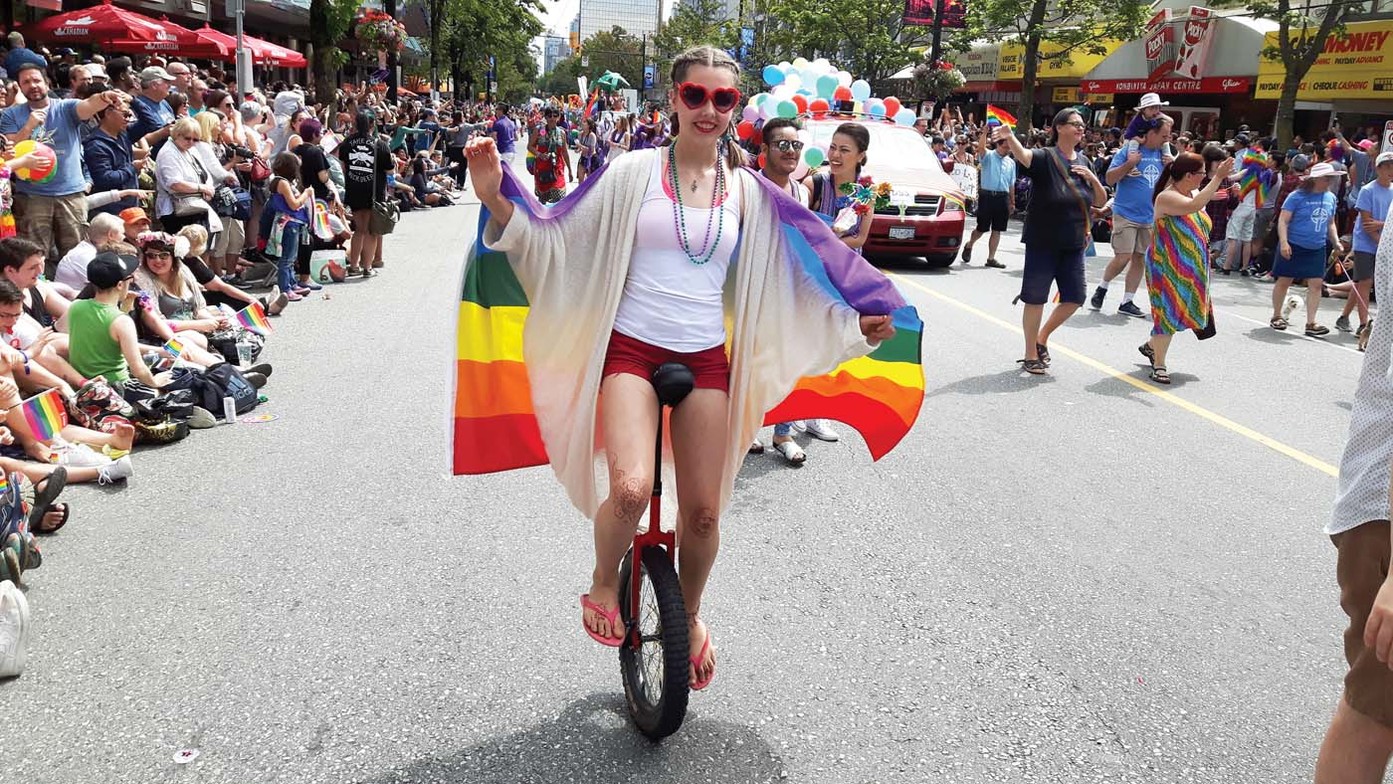 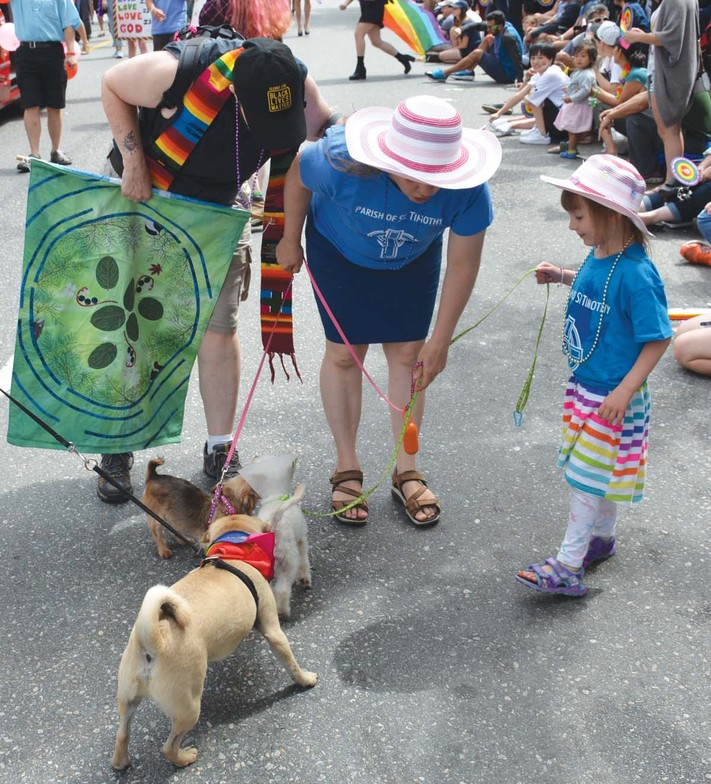 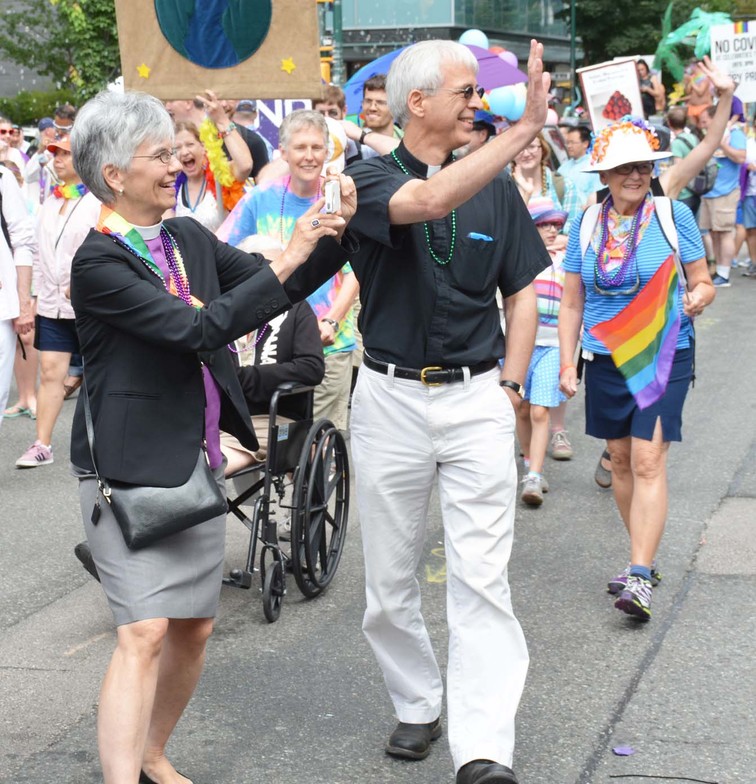 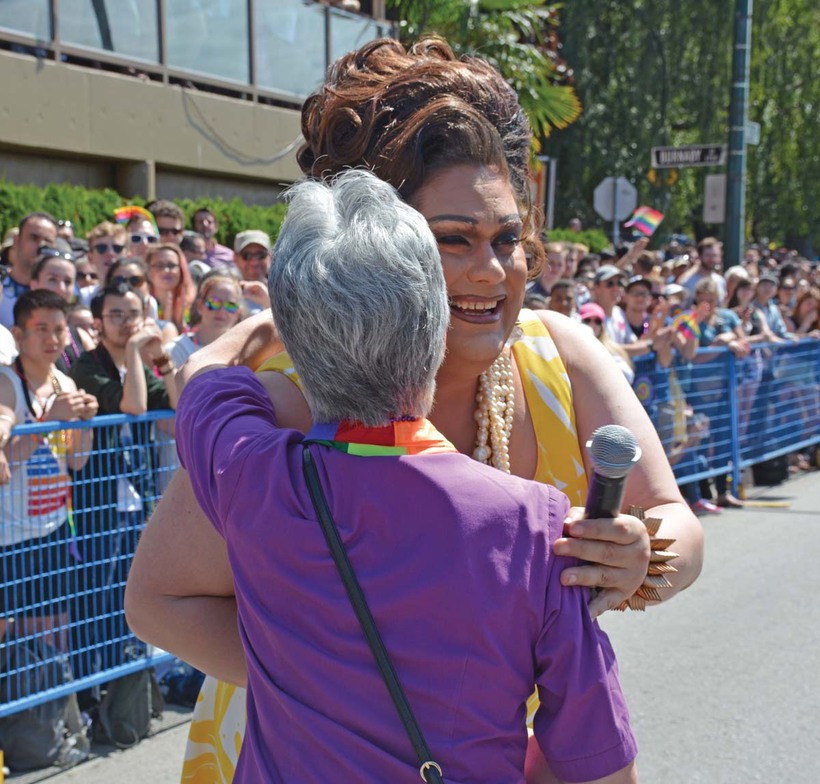 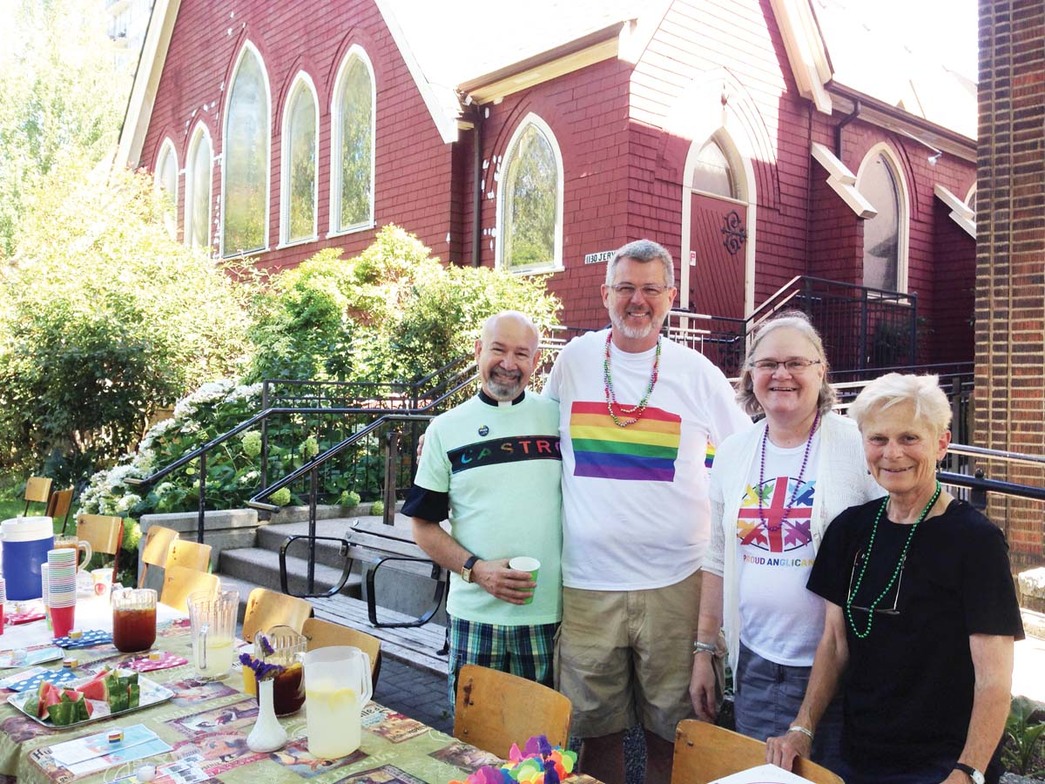 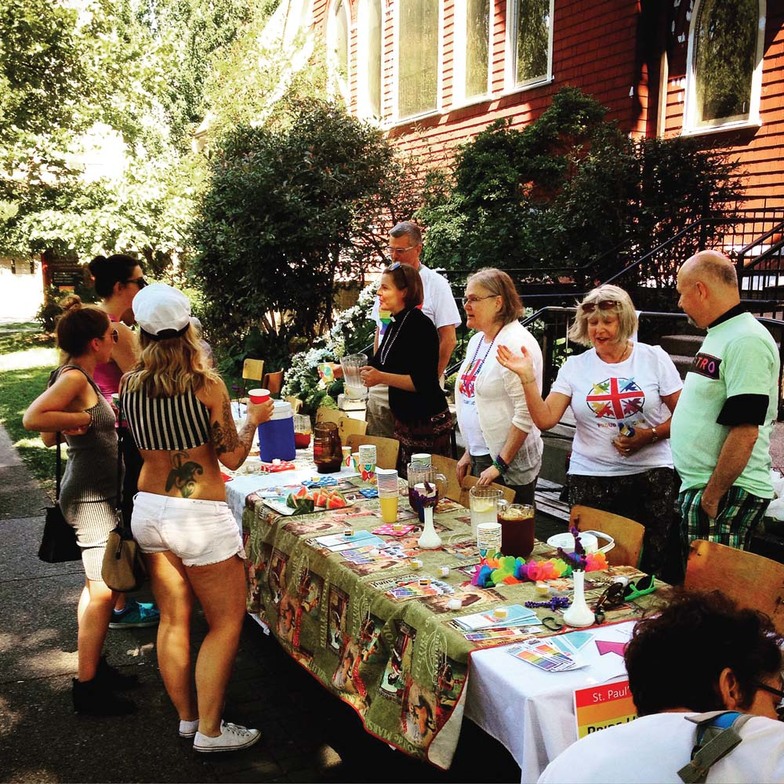 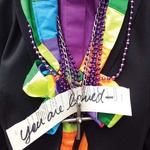 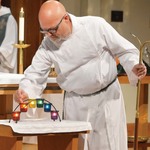 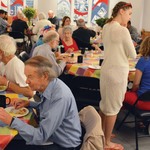 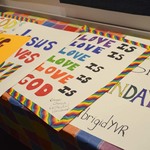 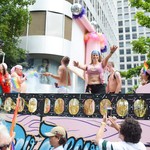 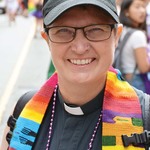 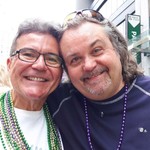 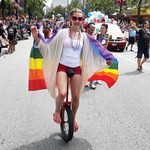 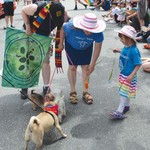 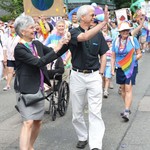 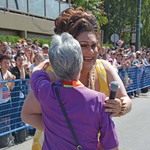 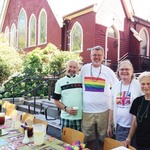 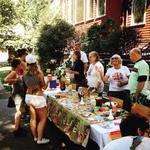 On Sunday, July 31, 2016, an 8am Eucharist which included the Service of Light took place at Christ Church Cathedral (CCC). Bishop Melissa Skelton presided and Dean Peter Elliott preached. Following worship, breakfast was served in the Parish Hall of CCC and then those folks who were going to participate in the Pride Parade as part of the Proud Anglicans delegation gathered on Alberni Street near Thurlow in the marshalling area.

The marshalling process began before 11am and the Proud Anglicans contingent actually began moving about 1:10pm. All involved had a great experience and the 2016 contingent of Proud Anglicans was the largest yet. It was inspiring to have Bishop Skelton, her husband the Reverend Eric Stroo, Dean Peter and his husband Thomas Roach and a dozen other clergy with their families and parishioners representing a good portion of the parishes of the Diocese of New Westminster.

At the Eucharist, Bishop Skelton began with the Service of Light saying,

“On this Pride day we light a rainbow of candles to celebrate the beauty of diversity in God’s good creation. We give thanks for all God’s beloved children, of every gender identity and sexuality, and for love in all its many forms. We remember with deep sorrow all those who have suffered because of prejudice and hatred, and this year especially we pray for the victims and families of the Pulse nightclub shootings in Orlando.

May today be a time to remember those we have lost, to commit to transform continuing injustice and to celebrate together the wonder and delight of all that queer culture offers to the world.”

There was an epistle read during the Eucharist, Colossians 3: 1-11. Dean Peter Elliott took this reading from Scripture for his sermon text, “For you have died and your life is hidden with Christ in God.” He positioned his message within a retelling of the events of General Synod 2016 and the ups and downs that were experienced through the vote on the Marriage Canon at that meeting on July 11 and 12 in Richmond Hill Ontario. He described the deep disappopintment that he and so many others felt when it seemed that the change resolution that would grant the sacrament of marriage to all qualified people in Canada, including same-sex couples had failed by one vote in the house of clergy. Twenty hours later the mistake was discovered and the decision was reversed. The resolution had passed, the majority of those who had been opposed to the change dramatically walked off the Synod floor before the closing of the meeting, in his words, “it was devastating”.

Dean Elliott pointed out that we live in a world divided by ideology and belief. We exist in “bubbles."

“Grievance and anger: lurking beneath the surface of the various bubbles we inhabit are deeply held convictions based on our experiences and values.  And one of those bubbles will materialize later today as thousands of people gather here in Vancouver’s downtown for the Pride parade, people celebrating the changes in society that have brought so many of us out of the shadows of fear into the full light of day.  I will walk with other Anglicans today in this parade, proud of our church embracing, albeit belatedly and clumsily, the inclusion of gender and sexual minorities in our common life.

But even within the bubble of gay pride, there are pockets of discontent: the pride movement itself has become mainstream and middle class, with corporate sponsors, it’s predominately anglo-centric, and sometimes tone deaf to other voices seeking recognition and inclusion.

Finding ways of understanding across and beyond difference seems increasingly impossible and in this context the words from Colossians may be of some assistance.

‘You have died’ the author writes, ‘and your life is hidden with Christ in God.’ This is of course an explication of the baptismal mystery: in the waters of baptism we symbolically die to an old way of being and are raised into the new life in Christ. In this new life there are no divisions—all that has separated and divided us dissolves in the grace of God. So it is that the author concludes, ‘there is no longer Greek and Jew, circumcised and uncircumcised, barbarian, Scythian, slave and free; but Christ is all and in all!’”

The marshalling area on Alberni Street was a lively place. Proud Anglicans organizer, Michael Kalmuk, ODNW of St. Margaret’s, Cedar Cottage and others were there early to position and decorate with balloons the compact SUV that would transport folks unable to walk the parade route. The wait time was substantial and the eardrums of some of the more sensitive Proud Anglicans were assaulted by the non-stop dance music coming from our next door neighbours in the marshalling area, the Clean/Sober/Proud float.

During the wait Bishop Skelton came across one of the thousands of hand written notes bearing the words “you are loved” that were available at the parade. She had fixed the scrap of paper to the items she was wearing around her neck: pectoral cross, Mardi Gras beads, rainbow scarf (see photo). The person who organized this initiative, Wendy, wrote the following note on the diocesan Facebook page, Anglican Conversation adjacent to the photo of the hand written message fixed to Bishop Skelton's pectoral cross.

“This is wonderful. I like to say, if you see the message, it was m e a n t for y o u. I asked the citizens of Vancouver to help me write handwritten notes for 25 thousand. On discarded book pages, we wrote close to 50 thousand, with the intention to place them in every open hand and accepting heart during the weekend of PRIDE. Local people, people far away, all joined together writing notes, connecting. During the PRIDE parade we had teams that personally distributed them. I am so happy you found this one.”

The approximately 50 people, three dogs, a unicycle and the balloon bedecked vehicle of the Proud Anglicans entry in the parade were extremely well-received by the thousands of people lining the parade route. Definitely, Hannah Greenfield of the North Van Region on her unicycle was one of the main attractions with the three small doggies also garnering a great deal of attention. Hannah’s mom, Alecia was resplendent in a full rainbow outfit and there were some other eye-catching costumes as well. The crowd cheered as the two couples (the three clergy dressed in clericals), Bishop Skelton and the Reverend Eric Stroo, and Dean Peter Elliott and Thomas Roach walked hand in hand waving to the spectators supported by numerous clergy of the diocese some dressed in clericals and many of them attended by members of their families.

After the parade, from 3-5pm, a team of volunteers at St. Paul’s located on Jervis Street near Davie in Vancouver’s West End very close to the parade route served iced tea and lemonade to parade goers, parade participants and Pride revelers. According to organizers, approximately 300 people, including residents of the neighborhood around St. Paul’s, came by for a cold drink and some fellowship with parishioners, Rector, the Reverend Jessica Schaap, and Assistant Priest, the Reverend Dr. Alain-Michel Rocheleau. The organizing committee is already busy planning next year’s event

The final paragraph of Dean Peter Elliott’s July 31, 2016 sermon perhaps puts into context the hope that was glimpsed by a handful of Anglicans who gathered together on that last Sunday of July 2016 to share the Eucharist and to participate in Pride:

“Martin Luther King famously said, “Let us realize the arc of the moral universe is long, but it bends toward justice.”  I believe deeply that the decisions of the recent General Synod for marriage equality is part of this long arc and I know that the work for justice for all people is far from over.  My prayer this day is that we are all inspired in this and every Eucharist both to take our part in the long road to justice and to learn how to live charitably and peacefully with those with whom we disagree.  For this work for justice is not ours: it is God’s will and work and as we continue in this work, we will be strengthened and renewed as we come to know what it means that we have died and our lives are hidden with Christ in God.”

On this posting you will also see a one minute film of the Proud Anglicans participating. Many thanks to Cliff Caprani for editing the footage taken by diocesan communications during the parade.