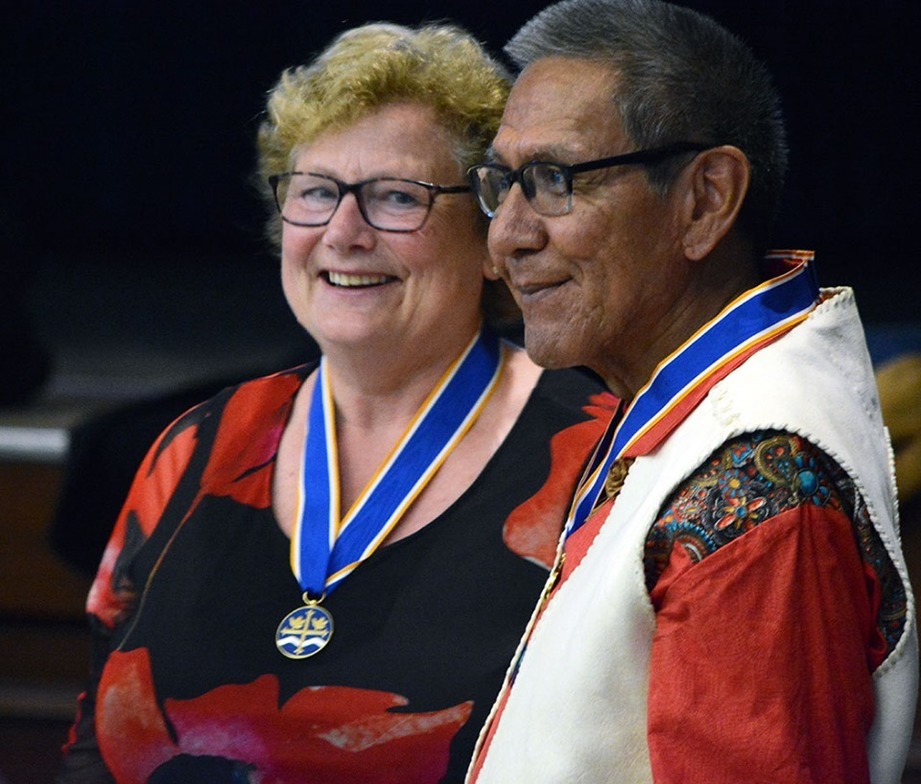 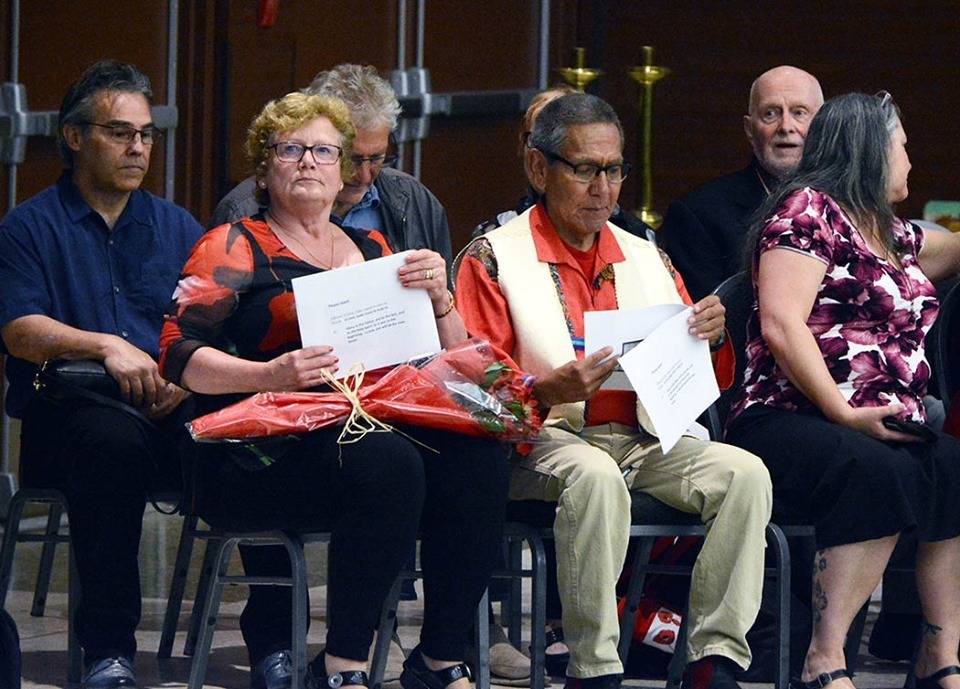 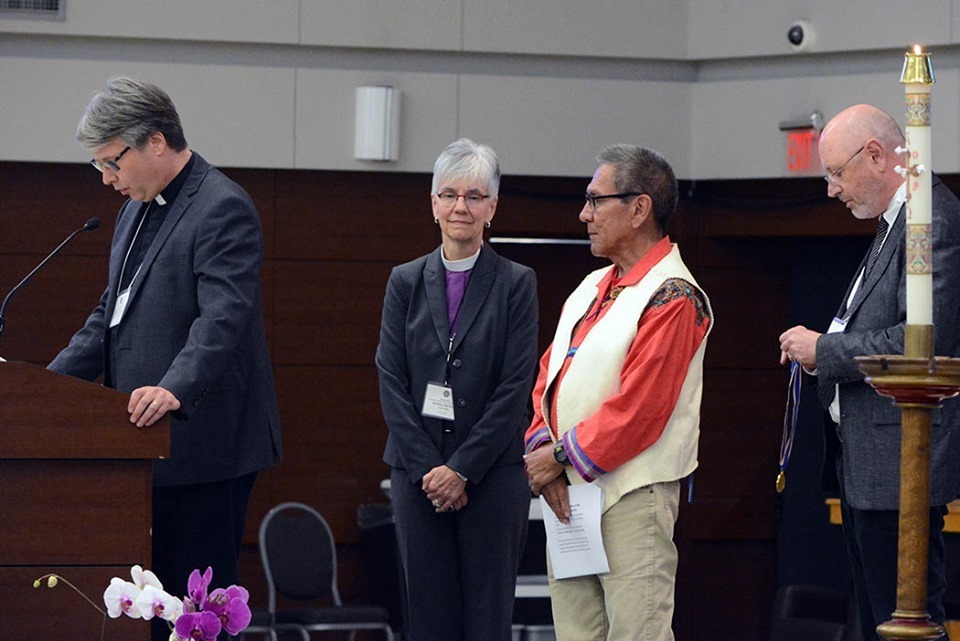 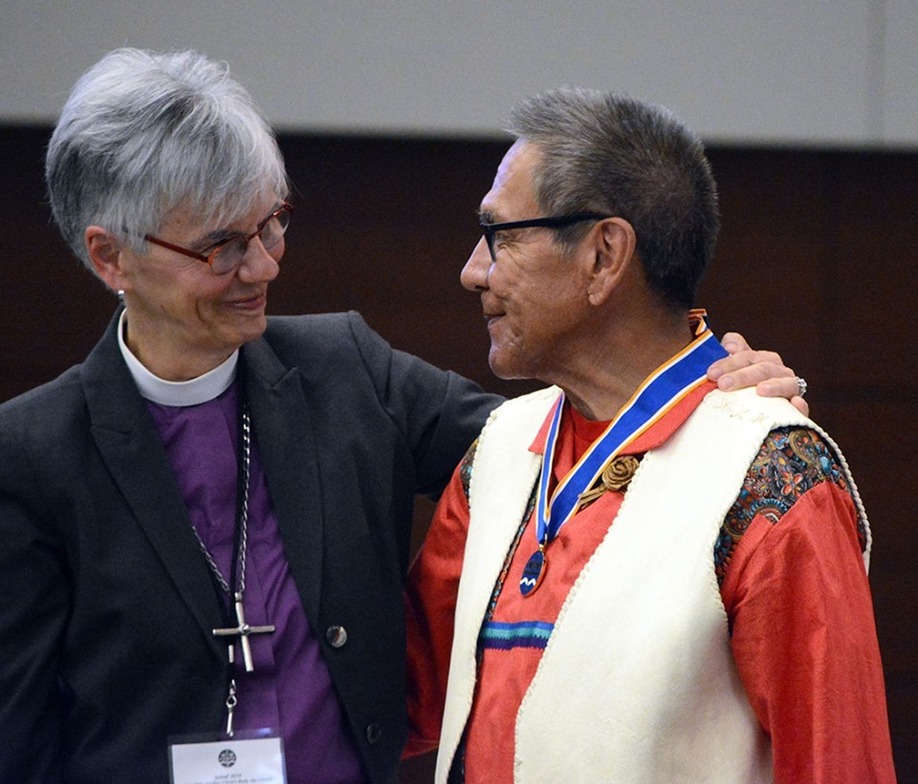 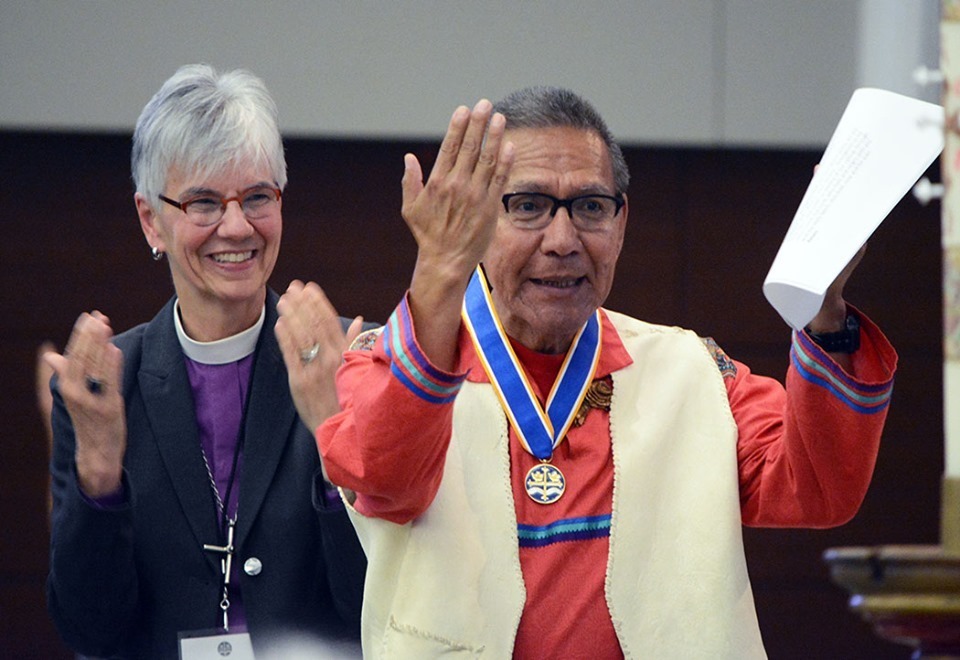 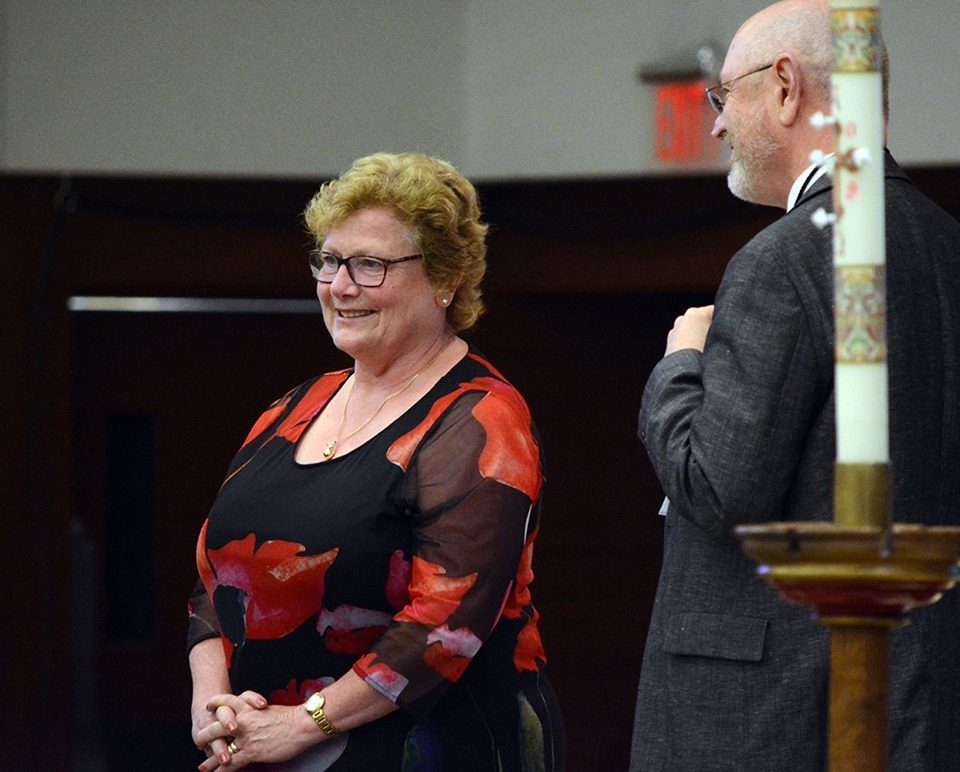 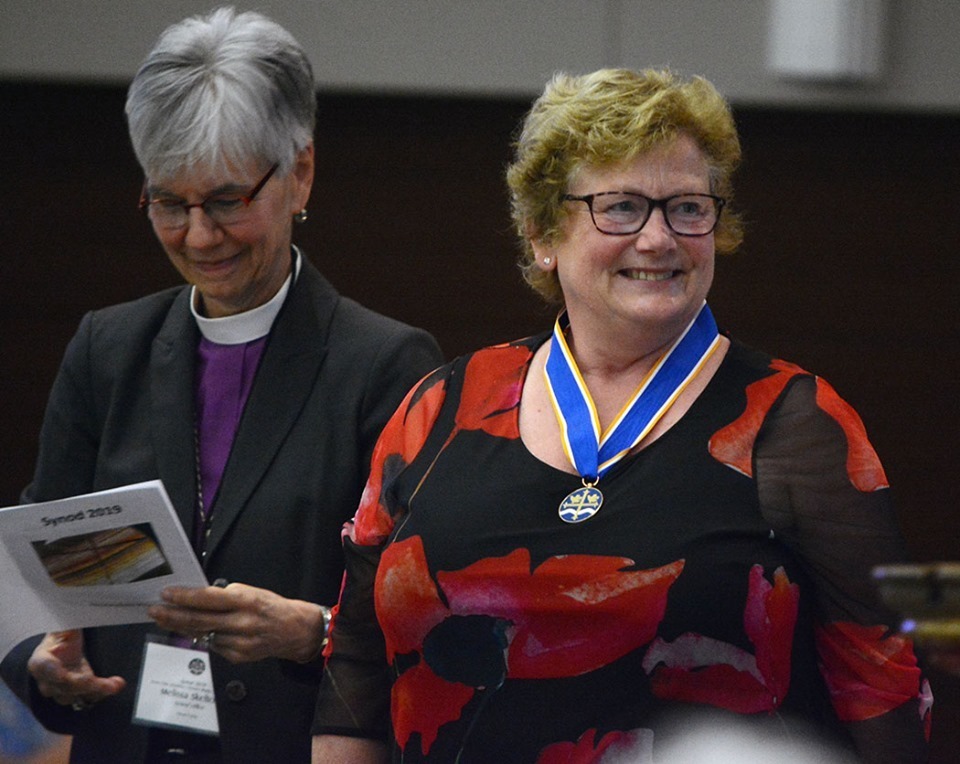 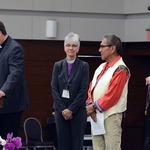 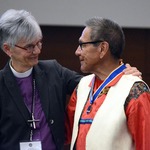 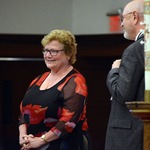 The 119th Synod of the Diocese of New Westminster with the theme,  Love One Another: Christ’s Body, the Church wasn’t just resolutions, amendments, discussions, points of order, presentations and prayers it was also a chance to celebrate two special recipients of The Order of the Diocese of New Westminster, Coyote Terry Aleck associated with St. Hilda's, Sechelt and Bette Geddes of Bette Geddes and Associates Catering and the Sharing Abundance Food Ministry.

The Venerable Stephen Muir, Archdeacon of Capilano and the Rector of St. Agnes' in North Vancouver’s Grand Boulevard neighbourhood read the Citations. Archbishop Melissa Skelton offered prayers and congratulated the recipients, and the Dean of the Diocese of New Westminster, the Very Reverend Peter Elliott placed the ribbons and medals around the shoulders of the newly invested.

The investiture ceremony concluded the Mid-day Prayers worship that began at 12:30pm on Day 2 of Synod, May 25. Prior to worship, Terry, Bette and more than a dozen of their guests took their places on chairs positioned in the southeast section of the Synod Hall (the Italian Cultural Centre Grand Ballroom). Coyote Terry Aleck took his place on the podium and Archdeacon Muir read the Citiation:

Coyote Terry Aleck is a member of the Lytton First Nation living on the Sunshine Coast. A Nlaka’pamux pipe carrier, a sweat lodge pourer, and a residential school survivor, Terry was one of the first former Indian Residential School students to sue the federal government and the Anglican Church for abuses suffered at St George’s Residential School in Lytton. He won the precedent-setting court case Aleck et al v. Clarke et al after a 17 year court battle. His journey has been featured in various documentaries and books, including The Healing Circle, Road to Reconciliation. Terry is a father of four daughters and one son, and has four grandsons and an adopted daughter. Trained as a Family Violence and Addictions Counsellor, he currently works as a security guard at a local shopping centre. He volunteers as Co-Chair of the Sunshine Coast School District’s Aboriginal Education Programme.  In 2017, he received the Canada 150 Award from Member of Parliament Pamela Goldsmith-Jones, in recognition of his many achievements and volunteer services over his past 32 years of sobriety.  Terry and his partner of 15 years, Christine Turenne, lead a monthly drum circle at St Hilda’s Anglican Church and they are active in giving drum making workshops, offering ceremonies for community members in need, assisting in the Kairos Blanket Exercise, and supporting the shíshálh Nation.

Following the reading of the Citation, Archdeacon Muir shared the following letter written by the Animator for Reconciliation, Anglican Church of Canada, Melanie Delva, ODNW.

"Because of my familiarity with archival records, Terry was an inspiration to me long before I ever had the opportunity to meet him. He is a pipe-carrier, leader, healer, teacher, husband, father, grandfather, friend. In a plot twist characteristic of the Creator's delight in making all things new, Terry's particular gift in bridging the gap between Indigenous and non-Indigenous peoples has brought healing and understanding to many hearts and minds.  But to me, he is also "Papa Coyote". He is my family.  So, Papa, let me just say: I am so sad that I could not be there to witness you receive this honour today.  You know that I have long admired the gut-wrenching work and incredible healing that has brought you to this point on the journey, and I am delighted that in this honour, others have the opportunity to do the same.  Thank you for all you have been in my life, and for sharing this adventure called life with me.  I love you.  -Melanie"

Dean Peter Elliott placed the medal and ribbon around the shoulders of Coyote Terry Aleck and the Synod Hall erupted with applause and cheers. Terry hugged the three clergy and then he raised his hands to the four directions as the applause continued.

As the applause for Terry Aleck, ODNW faded, Bette Geddes approached the dais to be invested into the ODNW.

Bette has a servant’s heart expressed in her love of feeding people.  She is reliable, hard working, creative and passionate about food and its preparation.  Her magnetic personality draws people to her circle as she shares her excitement about the food she has created.  She partners with Deacon, the Reverend Lizz Lindsay as the Executive Chef for Sharing Abundance, a non-profit society serving meals on the North Shore for over a decade. Bette plans, shops and prepares over 5,000 meals a year working several days a week for this charity. In addition, Bette caters for the Sharing Abundance host churches and Legions for luncheons, dinners and funerals, as well as catering at many other Lower Mainland churches and retreats. Bette probably has the keys to more churches than anyone in the Diocese! Bette is also the “Diocesan caterer”. She does most of the catering for weekend and special events including the Order of the Diocese of New Westminster Investiture Service in New Westminster where her boxed lunches receive rave reviews. Participants in events look forward to her great lunches and dessert treats as well as her unexpected special touches. Bette’s gracious presence and loving heart have come to the attention of many folks and her quiet ministry enriches many lives.

Again there was a roar of cheering and applause for Bette affirming her as a generous, tireless and cheerful part of the diocesan community. The line in the Citation about Bette’s collection of church keys was met with much laughter.

Following the ceremony the two members posed for photos and then it was time for the now traditional Saturday of Synod, hot pasta lunch.

Congratulations to Coyote Terry Aleck, ODNW and Bette Geddes, ODNW on this much deserved recognition.