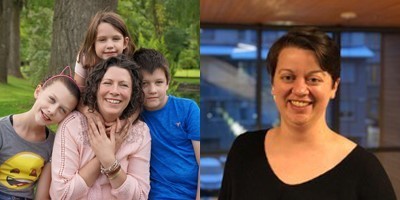 The Vancouver School of Theology has named Jackie Graham and Frances Kitson as the 2020 recipients of the Chancellor’s Scholarship. These scholarships are the most prestigious and generous awards offered to VST students each year.

Jackie Graham is a mother of three children and began studying at the Vancouver School of Theology in the Master of Divinity program in the Fall of 2017 as a distance education student. Located in Vernon, BC., this was a return to academia after being an at home parent for ten years which was preceded by a career in public relations focusing on politics, event planning and media communications. Jackie received her Bachelor of Arts in Political Science at the University of Northern British Columbia where she discovered a love for philosophy, civic engagement, and a passion for community. Jackie is a postulant for ordination to the priesthood in the Diocese of Kootenay with the Anglican Church of Canada. Questioning, curiosity, and a passion for the Bible, brought Jackie to VST. In these challenging days of Covid 19, Jackie is reminded of 2 Corinthians 4: 6-10 and hopes that we may continue to live in a time of being perplexed but not in despair. Thanks be to God.

Frances Kitson is a native Vancouverite and was taken by surprise when the call to ministry came after years working in theatre and construction. She has served in candidate supply for United Church congregations in Kelowna, and looks forward to a summer leading online worship for two Okanagan congregations. She is honoured and delighted to receive the Chancellor’s Scholarship, and dedicates its use to the memory of her grandmother, Dr. Margaret Isabel Griffiths, who worked for the ordination of women in the Church of England.

About the Chancellor’s Scholarships
Each year two Chancellor’s scholarships of $7,000 will be awarded to students entering their final year of studies at Vancouver School of Theology, as an encouragement to fuller-time engagement in their studies. The award is intended to support the costs associated with the recipient’s tuition and related personal investment in theological education.

To qualify to receive a Chancellor’s Scholarship, the recipient needs to be:

The awards were assigned by the VST faculty at its May meeting with thanks to Chancellors of VST, under the generous leadership of former Chancellor Dr. Heather F. Clarke.

The Vancouver School of Theology welcomes students from many Christian communions, other faith traditions and Indigenous communities, while celebrating its core relationships with the Anglican Church of Canada, the Presbyterian Church in Canada and the United Church of Canada.

The Vancouver School of Theology acknowledges that the land on which they are located is the traditional, ancestral, and unceded territory of the xwməθkwəyəm (Musqueam) People.

Oct 18
Sermon for the Feast of St. Luke