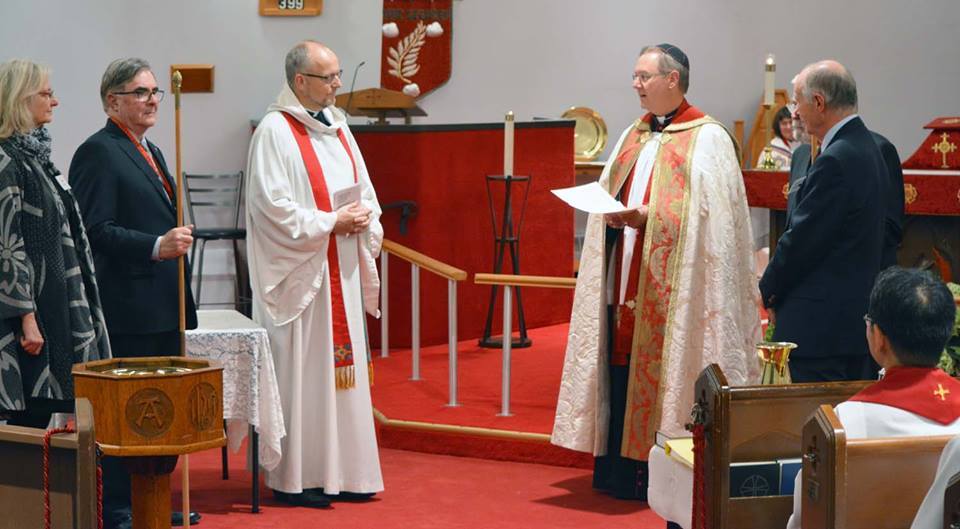 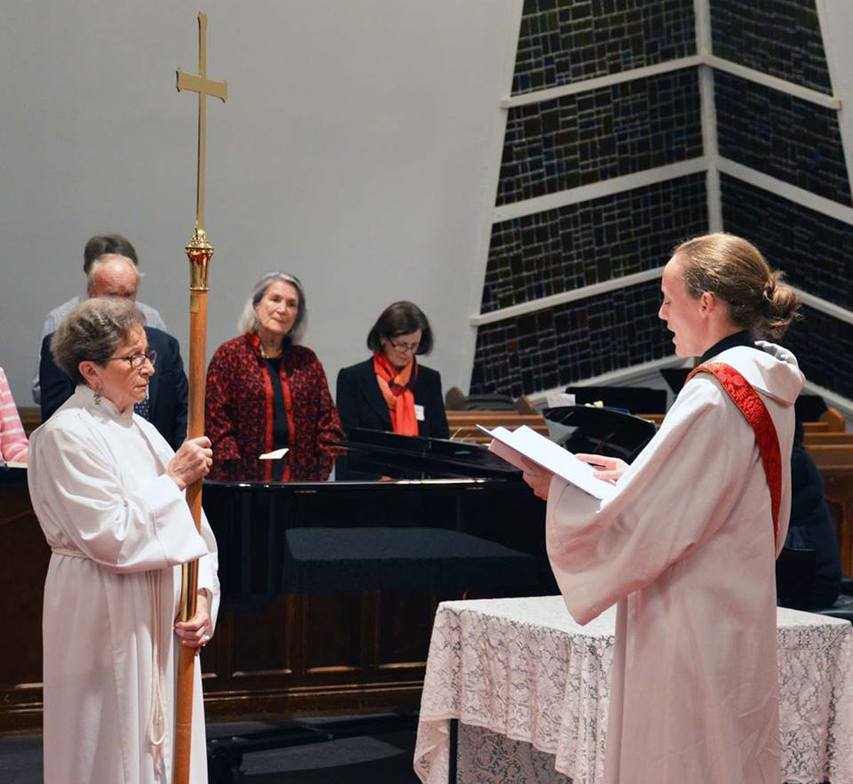 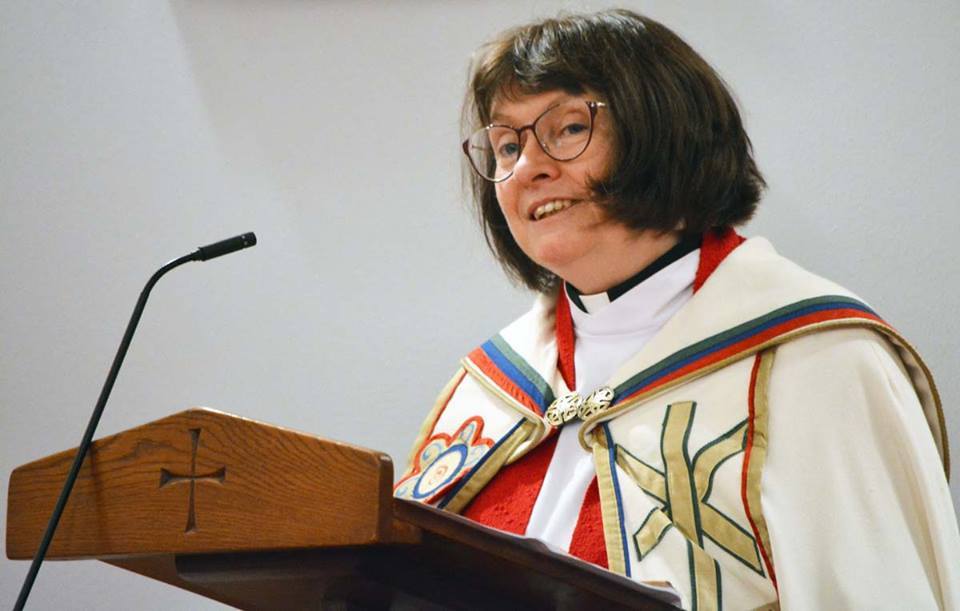 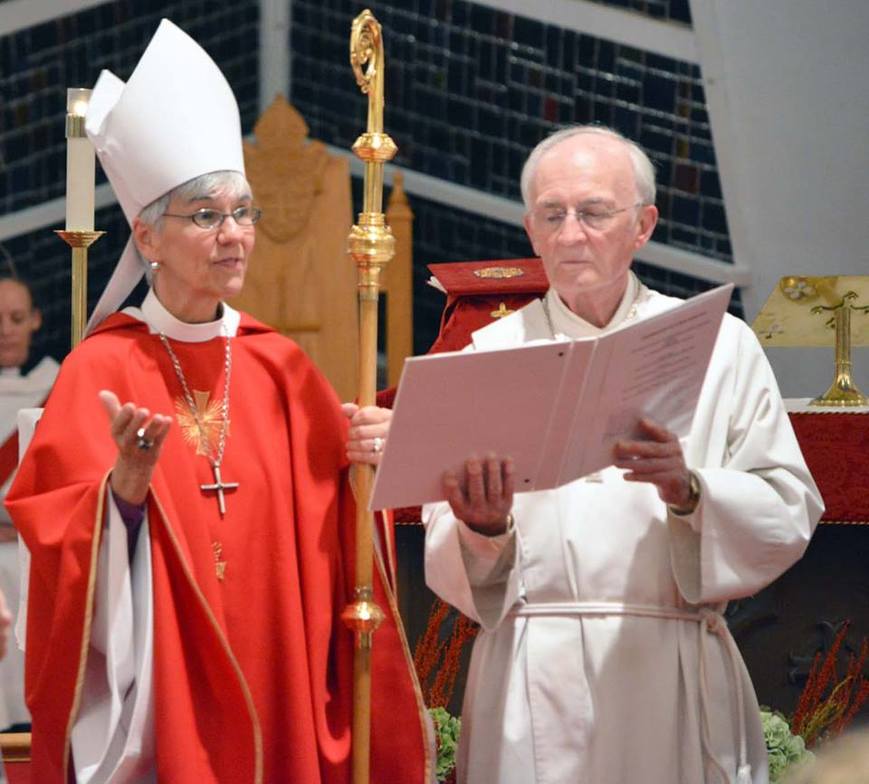 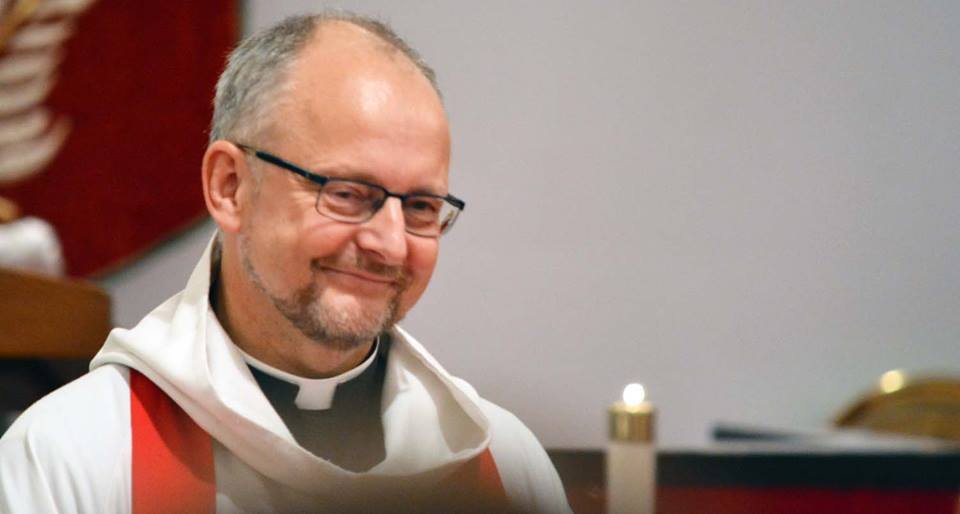 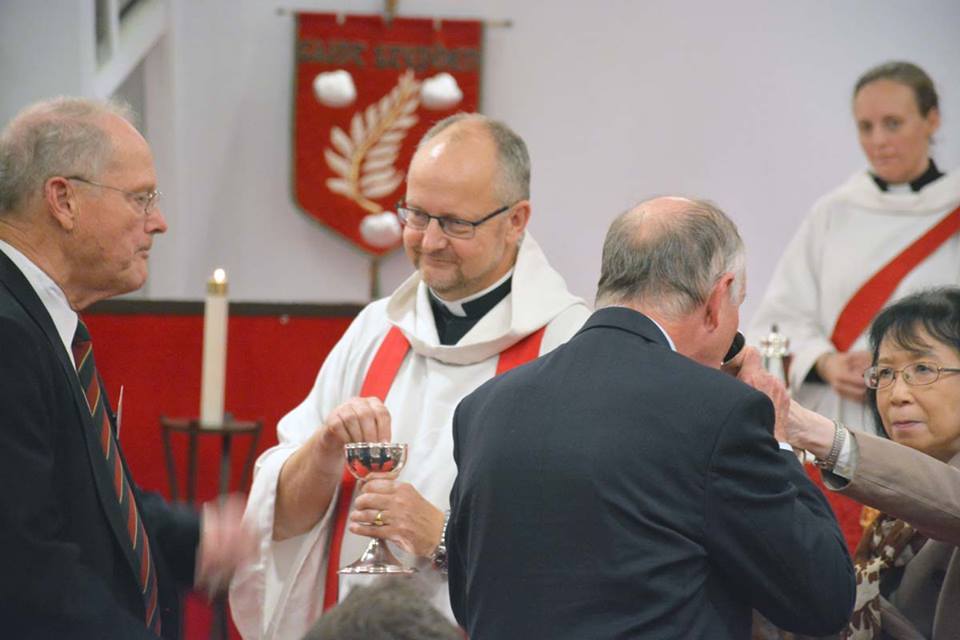 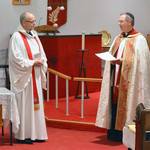 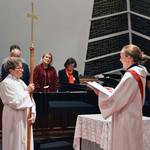 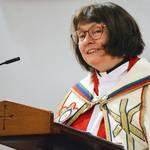 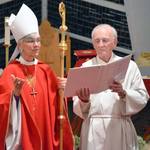 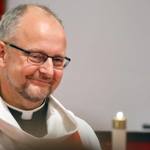 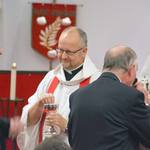 The long wait ended for the congregation of St. Stephen’s, West Vancouver during the evening of Monday, October 17 when Bishop Melissa Skelton inducted the Reverend Canon Johnathan LLoyd (surname uses the Welsh spelling with two uppercase 'L's) as rector and ordained leader of their shared ministry together.

Canon LLoyd was selected late last spring by the canonical committee and subsequently approved by Bishop Skelton after an extensive search process that had seen the ministry position posted all around the Anglican Communion.

The Revered Roberta Fraser served as interim priest-in-charge for most of the time between rectors and was a consistent ordained leadership presence during this period when the St. Stephen’s community underwent a time of self-reflection and discernment.

This period of discernment and reflection led to the development of their current parish profile and a priority listing of the attributes that they would like to see in their new rector.

The successful applicant, the Reverend Canon Jonathan LLoyd is from the Church of England. Most recently he had a ministry post in rural England, with responsibility for 9 parishes. Prior to that he was Archdeacon of  Northern Europe and was chaplain of St. Alban’s in Copenhagen, a beautiful mid-19th century Gothic Revival style structure located in a peaceful park setting in the city. Canon LLoyd was spent a great deal of time on planes to access the faith communities of his archdeaconry, 30 churches spread out in 9 countries.

Canon LLoyd had briefly been in Vancouver a few months prior for the interviews, however, he, and family members did not arrive to begin this new chapter of life in Canada until Saturday, October 15, so it was a tired but excited new rector who was installed by Bishop Skelton just two days later.

There was a good-sized congregation present including a large percentage of the priests from the Archdeaconry of Capilano. Regional dean, the Reverend Clarence Li made the journey from Sechelt on the Sunshine Coast and the Archdeacon, the Venerable Lynne McNaughton who was the preacher for the liturgy were both present to greet their new colleague. Also vested and present was Pastor Birgitte Saltorp of the Danish Lutheran Church of Vancouver located in Burnaby. Canon Lloyd later said that he was delighted that she had attended the worship.

The service was a standard Celebration of New Ministry Eucharist. Archdeacon McNaughton took the Gospel, Luke 4: 14-21 for her text unpacking the story of Jesus, filled and energized with the Holy Spirit following his encounter with evil, making his appearance in a Synagogue and choosing to read his edit of the Isaiah passage:

“The Spirit of the Lord is on me, because he has anointed me to proclaim good news to the poor. He has sent me to proclaim freedom for the prisoners and recovery of sight for the blind, to set the oppressed free, to proclaim the year of the Lord’s favor”

Archdeacon McNaughton said that after this long time of waiting, Jonathan will be an inspirational leader, who is outward looking…who likes to work as part of a team and understands that “all ministry belongs to God.” And that the clergy are here to be helpful “to the whole people of God” so that the laity can be the Church,“a place where faith, love and purpose are lived out.”

The liturgy continued with the Covenant in Ministry; the oaths and subscriptions, the reading of the bishop’s license by the Executive Archdeacon, Bishop Skelton asking the congregation gathered, “Do you, the people of the parish of St. Stephen, West Vancouver, commit yourselves to share with Jonathan in the ministry of this parish?” which was followed by the Presentation of the Symbols of Ministry: Bible, water for baptism, oils of Chrism and Unction, the Constitutions and Canons of the diocese, the keys to the buildings, prayer and hymn books and the bread and wine - the elements of the Eucharist culminating in Bishop Skelton’s announcement, “I present Jonathan as the leader of your ministry, and invite your welcome.”

The Covenant in Ministry was followed by the intercession, the exchange of the Peace, and the Eucharist. Always a profoundly moving time during a Celebration of a New Ministry when the priest administrates Holy Communion to the community for the first time as the rector or vicar of the parish.

One of the many benefits of attending worship at St. Stephen’s apart from the unique interior design of the building is the opportunity to enjoy the music in worship, especially the piano playing of Peter Vanderhorst. Peter’s ad libs on hymn tunes are appropriately meditative but also inventive and creative.

May God shower blessings on the Reverend Canon Jonathan LLoyd, his family and the people of St. Stephen, West Vancouver as they embark on this exciting new chapter in the life of the parish.

(This is an excerpt from the full feature article which will be published in the December 2016 issue of Topic, the publication of the Diocese of New Westminster, published and distributed 10 times a year as a section of the national publication, The Anglican Journal.)