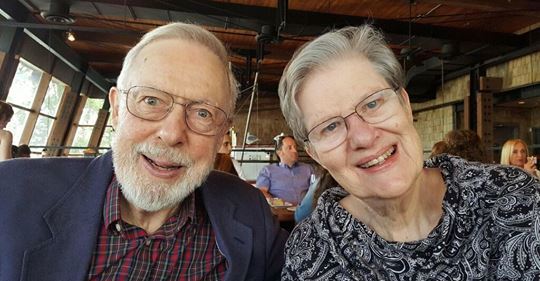 The Reverend Doctor William Robert Kirkpatrick Crockett, “Bill” to everyone, completed his life-long earthly journey with God, at age 84.

Bill grew up with his sister Margaret in Toronto. His early church connection was formed at the Anglo-catholic parish of St. Thomas' Church where the music, colours, processions, and incense created an air of mystery for young Bill. From an early age, he felt a vocation to the priesthood.

Bill completed his undergraduate degree in philosophy at the University of Toronto’s Trinity College. It was during this time, he met Jean. After taking a year off to travel in Europe, he returned to complete his Masters of Divinity.  Bill and Jean married after graduation in 1960: the beginning of a shared life together. He was ordained as a deacon a week before they were married and as a priest the following year.

Bill felt his call to the priesthood was also a call to academic life as a professor of theology. Soon after their marriage, Bill and Jean departed for the University of Chicago where he completed a doctoral program. After returning to Canada in 1964 he accepted a position at the Anglican Theological College of British Columbia as it was then known. In 1971 it merged with Union College and was renamed the Vancouver School of Theology. Bill continued as a member of the faculty for 35 years until retirement in 1999. For the majority of those years, he taught systematic theology. Bill is remembered by his many colleagues and students as a kind and wise soul with an engaging, yet subtle sense of humour.

Bill served on a number of committees in service for the Anglican Church.

Bill was also well-known for supporting the ordination of women. His unconditional acceptance of all people informed everything that he did.

Bill's visit to the Philippines in 1985 opened his eyes to the third world reality and a call to social justice that shaped his theological understanding ever after.

Throughout his spiritual life, what most nourished Bill was the experience of sacramental life and the Eucharist, which led to the publishing of his book, Eucharist: Symbol of Transformation in 1989.

Bill shared his love of life with his wife Jean, his daughters Carolyn, Catherine, and Linda, their husbands, and his seven grandchildren (Michaela, Kelly, Ben, Graham, Cameron, Kyla and Jennifer).

Travel was a passion throughout Bill's life. In the early years, the family piled into their car for adventures throughout British Columbia and the western United States. Sorrento Centre was a frequent summer destination. When the children were young, the family enjoyed several Christmas trips to Disneyland. Bill and Jean went on their first cruise for their 25th wedding anniversary. This would lead to over forty voyages to destinations around the world.

Bill also enjoyed fine dining (pubs too) especially when it came to dessert. He was a deep thinker, but also easy to be with. He exuded kindness and acceptance. And he loved to laugh.

His sister Margaret will never forget him walking her down the aisle and performing the wedding ceremony. She has fond memories of going out to jazz concerts, theatre productions, and celebrating special dinners together.

Jean will miss her partner of 58 years. Bill supported her independence during her younger years, and cared for her through life's later challenges. She is sustained by his absolute faith in life after death.

Bill's daughters will miss the gentle acceptance and encouragement he provided them throughout their lives. His gifts of intelligence and laughter have been inherited by his grandchildren (not to mention a fondness of desserts).

...the preceding piece was written by Bill's wife Jean and their three daughters, Carolyn, Catherine and Linda.

A Requiem Mass will be offered for Bill at Christ Church Cathedral on Saturday, November 24 at 2pm.

Clergy who would like to participate in the procession are to be at the Cathedral and vested no later than 1:30pm.

The liturgical colour is white.

IMAGE
Bill and Jean out and about.