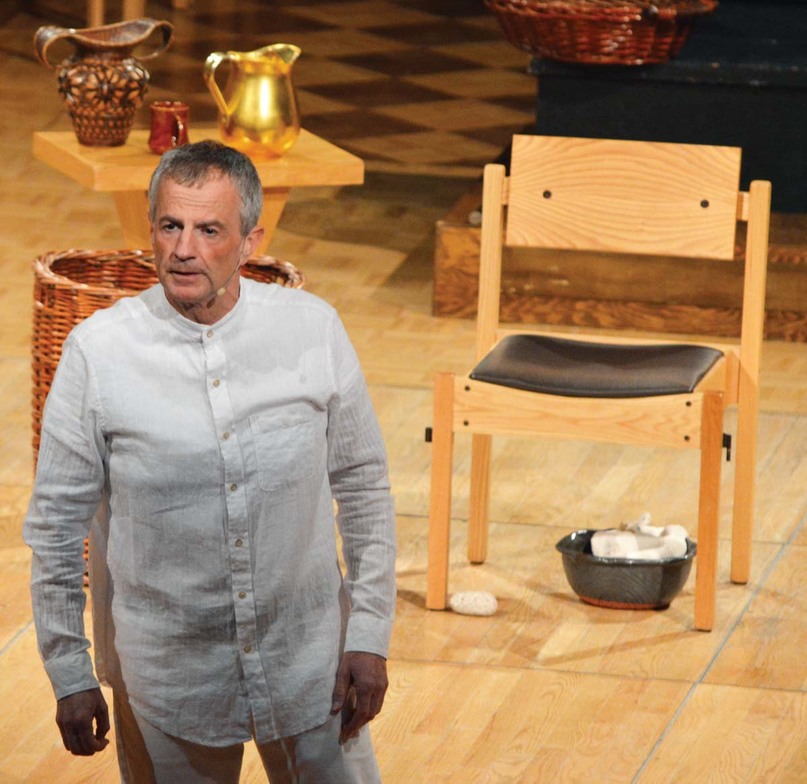 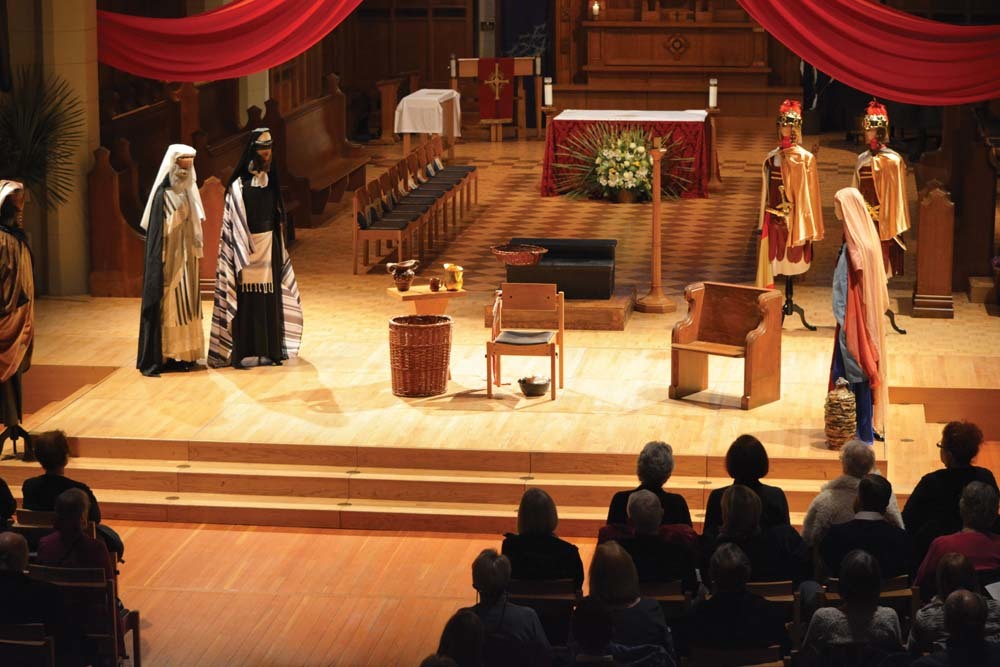 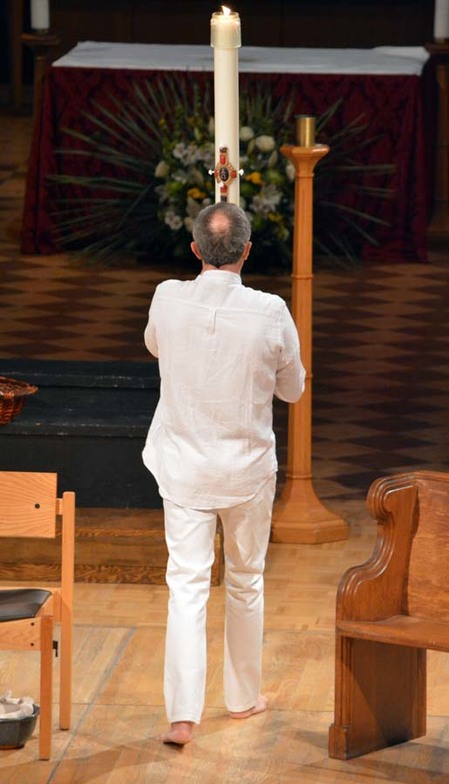 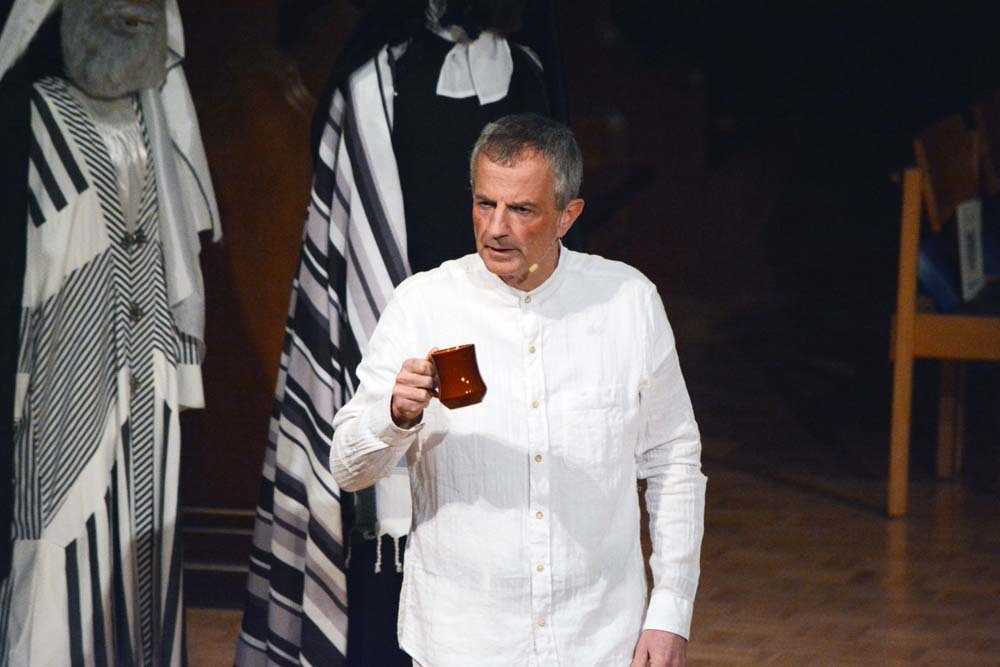 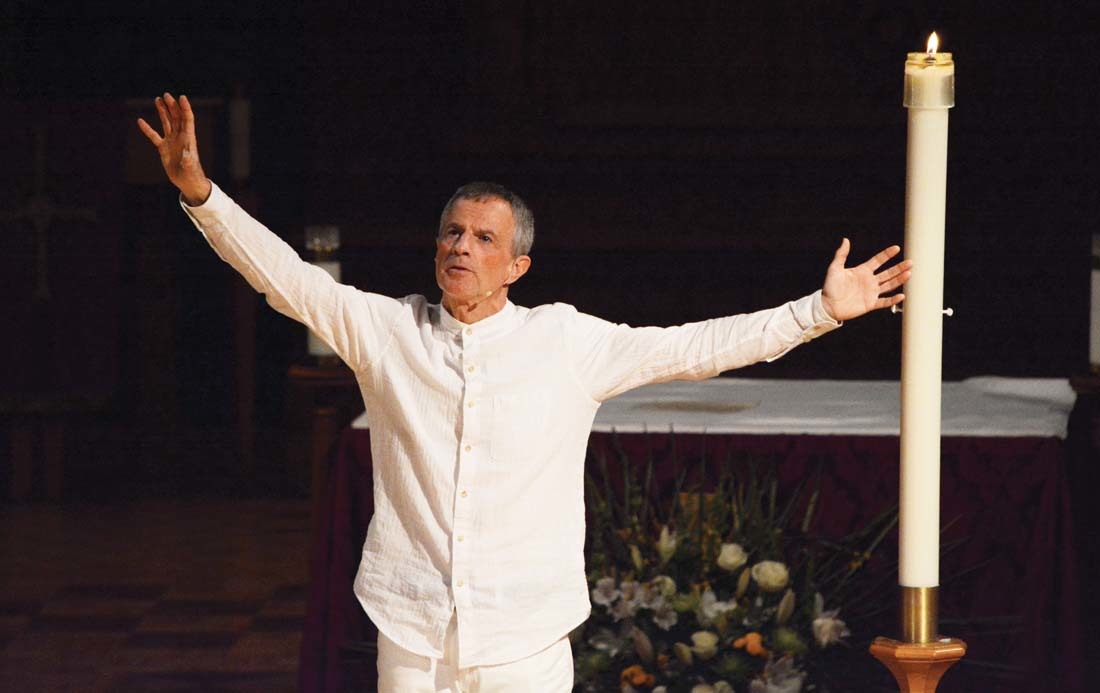 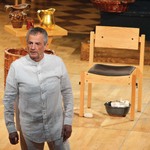 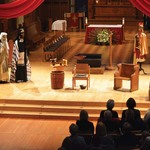 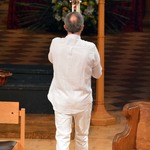 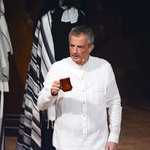 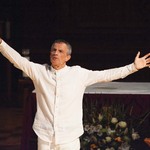 By 7:30pm on Monday, April 10 a group of approximately 100 had gathered in the nave of Christ Church Cathedral to experience, Word of Light – John’s Gospel in the Flesh, the Reverend Dr. Angus Stuart’s dramatic recitation of the Gospel of John.  Dr. Stuart is the rector of St. Francis-in-the-Wood located in West Vancouver’s Caulfeild neighbourhood.

Dr. Stuart has been performing his dramatic interpretation of Mark’s Gospel, titled Testament of a Naked Man for most of the past decade and for this production he has again teamed up with Vancouver choreographer/director/producer, Carol Coulson who contributed to the staging of the dramatic one person performance.

For this production there were a number of set decorations and props to augment the dramatic narrative including six dressmaker style mannequins symbolizing: two Roman soldiers, two Pharisees, a mannequin in female “biblical” clothing on stage left, and on stage right a mannequin clothed as a male. There were also a number of props including: a wine jar and a cup, the basin and a cloth, a stone, the spear that was thrust into Jesus’ side.

The first section of the performance consisted of John’s Gospel chapters 1-12 and ran for about 75 minutes. With the lighting dimmed, the audience in place, Dr. Stuart’s voice was heard speaking the famous opening phrases, “In the beginning was the Word, and the Word was with God, and the Word was God.” Then he appeared, entering the nave from the narthex processing toward the chancel platform carrying the lit Paschal candle, and continued saying, “He was in the beginning with God. All things came into being through him, and without him not one thing came into being. What has come into being in him was life, a the life was the light of all people. The light shines in the darkness, and the darkness did not overcome it.”

After a 10 minute intermission, the second section, chapters 13-21 ran about 45 minutes and following the telling of the crucifixion, and Jesus appearance after death Dr. Stuart completed his interpretation of the Gospel text processing out of the nave and into the narthex speaking the closing verses, John 21:24-25, “This is the disciple who testifies to these things and who wrote them down. We know that his testimony is true. Jesus did many other things as well. If every one of them were written down, I suppose that even the whole world would not have room for the books that would be written.”

The performance was met with enthusiastic applause, a standing ovation and two curtain calls.

A suggested donation of $20 was collected at the door and will be shared between the ministries of Christ Church Cathedral and St. Francis-in-the-Wood’s “Testament of a Naked Man” Ministry.

More photos and captions are available by clicking this link and accessing the photo album on Anglican Conversation, the Facebook page of the Diocese of New Westminster.