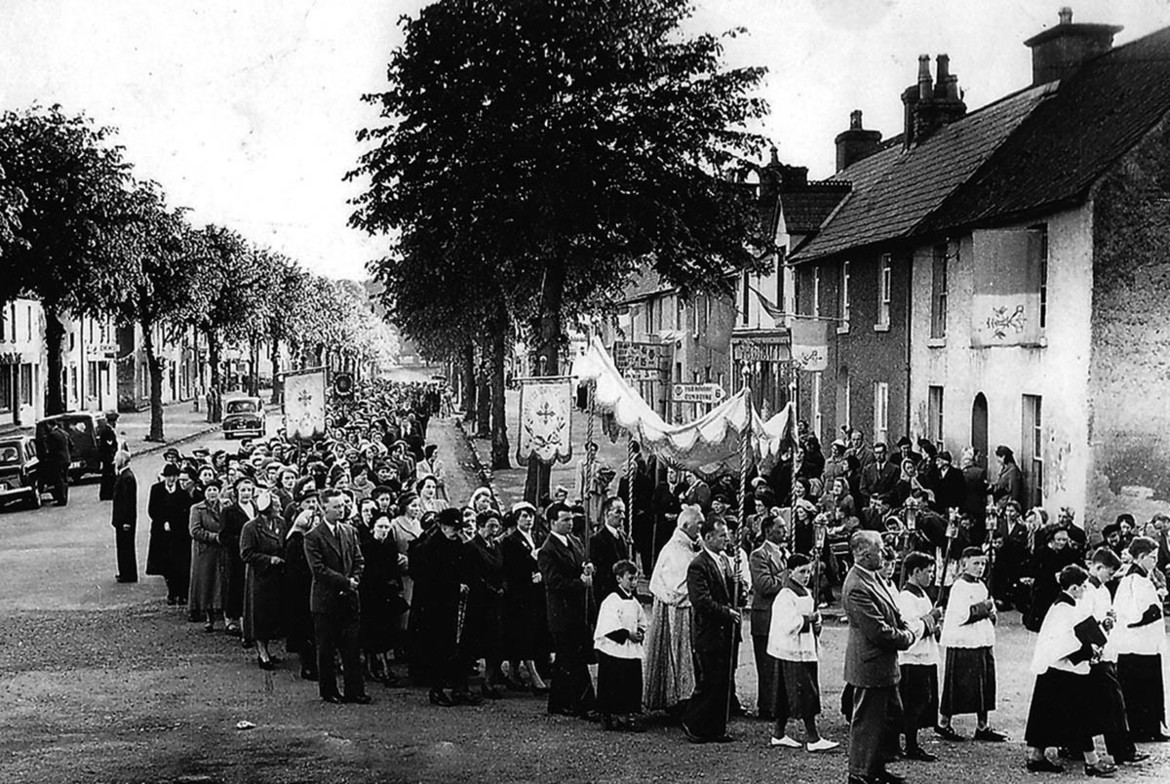 It was my best friend Jim who suggested we go downtown to watch the Corpus Christi procession. As Church of Ireland boys, we were not sure what it was, but it sounded interesting. We were both nine. We told nobody where we were going. As we got near the city centre, we could hear church bells ringing. Soon we were moving within a great crowd. My memory is that it was a happy, boisterous crowd and this puzzled me. I was used to church occasions being quiet and serious.

Eventually we found ourselves in the main street of the city, surrounded by a solid mass of people. We knew we could see very little unless we got to the front, so we wormed our way through. We heard the distant sound of an army band, its music slow and solemn. Sunlight glinted on the brass instruments, the leader marched resplendent in white gloves carrying a staff that rose and fell to beat time for the band. Behind the musicians in their green uniforms marched a body of soldiers with rifles. There were other bands, too: pipers with swinging saffron kilts led by a major who hurled his gleaming staff into the air and caught it without missing a step.

Then came the children. Whenever I read of the Children’s Crusade in the Middle Ages, I think of this occasion. All the schools were closed, even our Church of Ireland schools, since Corpus Christi was a public holiday. The ruddy Irish faces of Wolf Cubs, Boy Scouts, and Girl Guides were beaming with excitement and self-importance. No effort was made to get them to walk in step. They flowed along in a solid mass, dressed in their uniforms, acknowledging the greetings from the crowd.

Then came the Catholic organizations: the Legion of Mary, the Confraternity of the Blessed Sacrament, the Solidarity of the Blessed Oliver Plunkett, and most dramatically the Knights of Columbus with their drawn swords and black capes.

The next and climactic part of the procession rounds the curve of the wide street, and it eclipses everything else on this day: the bands, the uniforms, the crowds, the closed shops and schools. First comes the great white and gold canopy waving up and down, carried by priests. Under it, preceded and followed by more clergy, comes the bishop, magnificent in his vestments, blessing everyone to right and left. The thought occurs to me that he might have some way of knowing that two Protestant boys are in the crowd. He looks as if he knows everything. I am relieved when he passes by, leaving us undetected.

Every eye is fixed on what is being borne before the bishop under the white canopy. A disc of gold on a long pole is carried by a tall, robed figure. In the centre of the golden frame is a small, pale circle: the Corpus Christi, the Body of Christ. The silence of the crowd changes to a strange sound, a kind of whispering wave of awe, as everyone kneels for the passing of the monstrance containing the Sacred Host. As Jim and I kneel I feel a sense of guilt about my parents not knowing where I am and what I am doing.

My memory fades after that most solemn of moments. Many other groups marched: policemen, nurses, civic organizations, professional guilds. As I think back, I realize I could not have grasped then that I was given a vision of a world made whole: an entire society unified by the primacy of the sacred, giving it absolute precedence over everything else: commerce, schooling, sports. I had a glimpse of Christendom even as it was already beginning to disappear in the greater world beyond the small, newly independent island I called home.

The memory of that day also serves as a future hope for the fragmented culture I now live in. I realize that such a day cannot come again in the same way. However, that image of social unity inspires me to search for signs of wholeness about me, however faint and tenuous. The church that I watched passing by me on that Feast of Corpus Christi was at the time still glorious, confident, even imperial in its capacity to rule, to discipline, even to punish. Many faults are now ascribed to it in a very different age and society, and there is no doubt that they were, indeed, real and grievous faults. But for one glorious hour in those crowded streets, it challenged the so-called real world to dare to believe in a world much more real. Such were the gifts of Corpus Christi to a wide-eyed Protestant boy caught up in the surge of a vast, never to be forgotten, Roman Catholic tide.