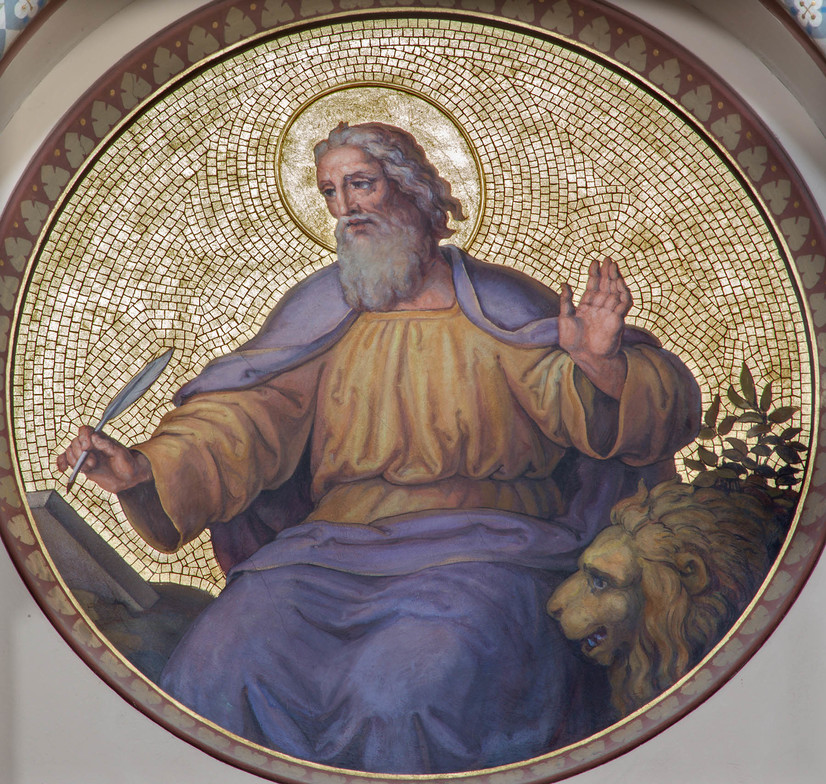 References to a person named Mark — or John Mark — appear quite frequently in the New Testament. Saint Paul mentioned him among his companions in the Letter to Phile’mon. In the Book of Acts Mark is described as the cousin of Barnabas the Apostle and the son of a wealthy woman of Jerusalem, whose house was a meeting-place for the disciples of Jesus. The Book of Acts also says that Mark accompanied Paul and Barnabas on their first missionary journey, but then decided to turn back. Paul and Barnabas fell out over Mark’s decision; they parted, and Barnabas took Mark with him when he went to preach the gospel in Cyprus. In the First Letter of Peter, the author called Mark “my son”; and even if this letter was not written by Peter himself, it bears witness to a close association between the Apostle and Mark. Tradition identifies the Mark mentioned in these New Testament passages with the author of the Gospel.

It is generally agreed that Mark’s is the earliest of the four gospels; scholars say that it was written around the year 68, probably at Rome. It was contemporary with the Church’s first experience of persecution by the pagan authorities of the Roman empire.

This may explain why, of the four Gospels, Mark’s version has the sharpest edge and offers the least comfort. He was
addressing a Church confused by the gap between the promise of “the good news” and the reality of persecution. In his
account, the disciples are just as blind and uncomprehending about Jesus as the pharisees and rulers; they confess that he is “the Son of God” but refuse to understand the still greater truth, that the Son of God must suffer and die. Mark therefore takes great pains to let his readers in on the secret, so that Christians experiencing persecution would not make the same mistake. His “good news” is demanding news. It is designed to show that Christians can only share in the glory of the resurrection by imitating the same heroic obedience to God which ledJesus to accept death on the cross.

Vienna - Saint Mark the Evangelist by Josef Kastner from end of 19. cent. in presbytery of Carmelites church in Dobling.