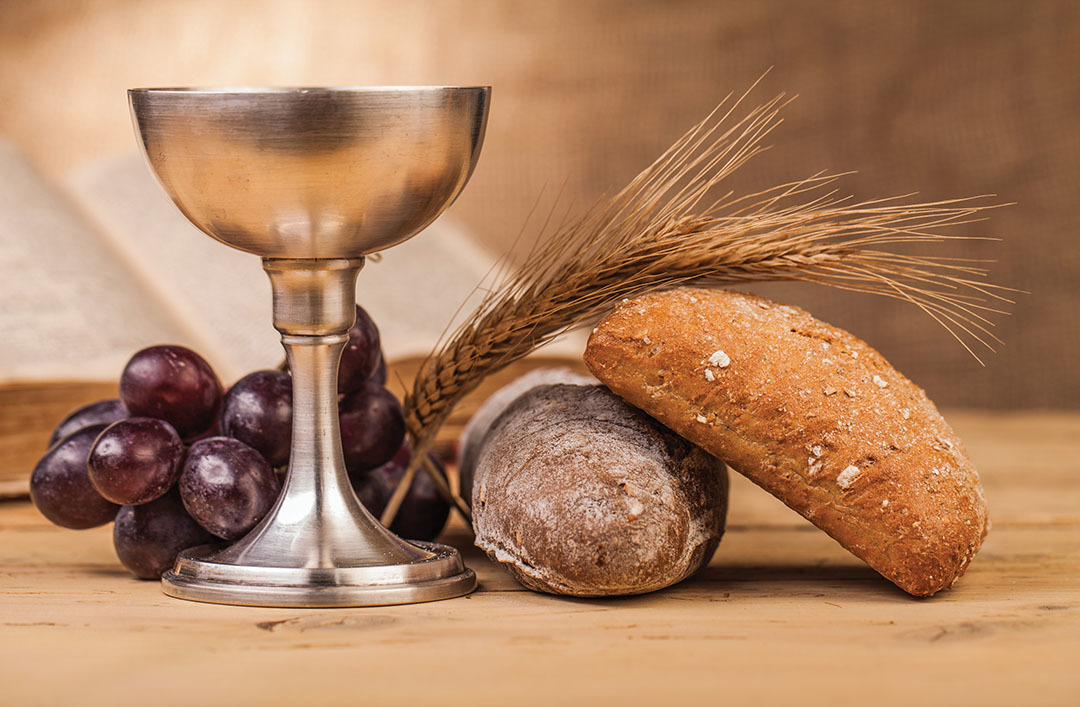 Since the advent of AIDS and subsequent worldwide epidemics and pandemics such as SARS and COVID, the Anglican practice of using a common cup at our celebrations of the eucharist has come under widespread scrutiny.  Scrutiny is not a bad thing unless it leads us to make decisions which make us lose touch with our spiritual heritage as well as be contrary to medical and scientific knowledge and research.

What is our current pastoral situation?

At the beginning of the COVID-19 pandemic, medical authorities were still uncertain as to how the virus was spread.  Very quickly Anglican bishops in Canada decided to limit consumption of the consecrated wine to the presider and only to distribute the consecrated bread to the other communicants.  In addition to these restrictions, clergy and congregations were mandated to wear masks, to sanitize their hands frequently and to maintain physical distance.

These measures were reasonable precautions to limit the spread of the virus and to protect the more vulnerable members of our congregations.  But we know now that the virus is not transmitted by food and that sharing the common cup poses a minuscule risk, particularly when our traditional practices of administration are employed, e.g., the use of wine, wiping the chalice after each communicant and the sanitizing of the hands of the administrator prior to administering the cup.

Given what we know, Anglican dioceses in Canada are discussing how best to restore the common cup to those who wish to receive the cup as well as the consecrated bread.  There is widespread recognition that what we know does not always change how we feel.  Statistics and research do not always overcome our perception of the situation.

What has been our historical practice?

The oldest written account of how Christians celebrated the eucharist is found in Paul’s 1st Letter to the Corinthians.  Given what we know about the early Corinthian community and its contentiousness, it should not surprise us that Paul emphasizes how sharing in the one loaf and the one cup is a symbol of the unity of the Christian community.

In the same way he took the cup also, after supper, saying, “This cup is the new covenant in my blood.  Do this, as often as you drink it, in remembrance of me.”  For as often as you eat this bread and drink the cup, you proclaim the Lord’s death until he comes again.”  (1 Corinthians 11.25-26, emphasis added)

Elsewhere in the epistle, Paul equates sharing in the eucharist as our participation in the life, death and resurrection of Christ and as his pledge to us of eternal life.

Prior to the Reformation the common cup was the practice of the eastern and western Christian churches even after their disagreements on the use of leavened versus unleavened bread.  Even when the cup was denied to the laity, the eucharistic liturgy always involved the consecration of wine in a common cup which the presider consumed.

During the Reformation some communities associated with Swiss reformers began using individual cups to emphasize the eucharist as a community meal.  Over time this practice was adopted by other Christian groups, but Anglicans have consistently resisted this practice.  The various Anglican prayer books throughout the Communion continue to reference the common cup as the normative practice of our tradition.

Our most recent authorized service book, The Book of Alternative Services, states that “it is desirable that there be only one chalice on the altar” and a flagon or decanter if required to fill “additional chalices” (BAS p. 184).  The common cup is also the stated norm of the Anglican Church of Canada (see https://www.anglican.ca/ask/faq/common-cup and https://www.anglican.ca/resources/liturgical-principles).

It should also be said that there have always been Anglicans who have refrained from receiving from the common cup for various reasons.  We have consistently taught that to receive the consecrated bread alone is to receive the fullness of grace offered by God to us in the sacrament.

What are our theological values?

John Baycroft, sometime Bishop of Ottawa and author of The Eucharistic Way (Anglican Book Centre, 1981), writes that we drink from a common cup

. . . as a strong symbol of unity and our willingness to accept each other.  We share our love and lives as we share the cup . . .  The cup of love and unity is unavoidably a cup of sacrifice.

When we break the bread and drink the cup, we symbolize Jesus’ words to us in the Gospel of John, “I am the vine, you are the branches” (John 15.5).  To share in the cup is to participate in Jesus’ mission in the world.

Should someone say, ‘It’s just a symbol’ or ‘It’s merely symbolic’, as justification for setting this ancient practice aside, I would respond in this way.  When someone says that someone or something is ‘just a symbol’ or ‘merely symbolic’, the speaker may be unaware of the power of symbols and might wish to renew their intellectual and spiritual awareness of the truth that symbols participate in the reality that they signify.  Symbols matter because they make truth tangible.

How shall we move into the future?

After almost five hundred years of use, there is no evidence to suggest that Anglicans have a higher risk of infection than the general population.  However, the perception among some people is that there is a risk.  So, we resume the use of the common cup gradually and intentionally.

Congregations need good and clear information.  Communion administrators need to be re-oriented and re-trained in the proper administration of the cup and how to do this in ways that build confidence among communicants.  Clergy need to convey to their congregations that an adapted old Anglican adage applies here: ‘All may receive.  Some should receive.  None must receive.’  The resumption of the common cup offered to all can be done in a way that accommodates all communicants, those who receive in both kinds and those who do not.  What will be accomplished is the liturgical proclamation of what Paul wrote so long ago that ‘the cup of blessing that we bless, (is a) sharing in the blood of Christ.’