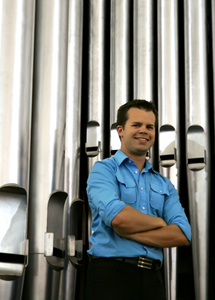 Exactly 100 years ago - August 11, 1912 - the doors of Chalmers Presbyterian Church (now Holy Trinity) opened at the corner of Hemlock and 12th, and the first chords resounded from the 2,271 pipes of their pipe organ. On August 11, 2012, MusicFest Vancouver is proud to present self-describe "organblaster" Michael Dirk in a light-hearted concert that puts the mighty Casavant Frères Opus 485 instrument through its paces!
The Casavant Brothers (Casavant Frêres) have been building pipe organs since 1879 and are based in Quebec. Their instruments are installed all over the world in churches, cathedrals, and concert halls.
This celebratory concert includes works by J.S. Bach, a tribute to Virgil Fox's "Heavy Organ" tours from the '70's, Healey Willan's magnum opus Introduction, Passacaglia and Fugue, Denis Bedard's Variations on "Old Hundredth" - plus improvisations to a Laurel & Hardy silent movie, complete with popcorn for the audience!

BUT TICKETS FOR THIS PERFORMANCE