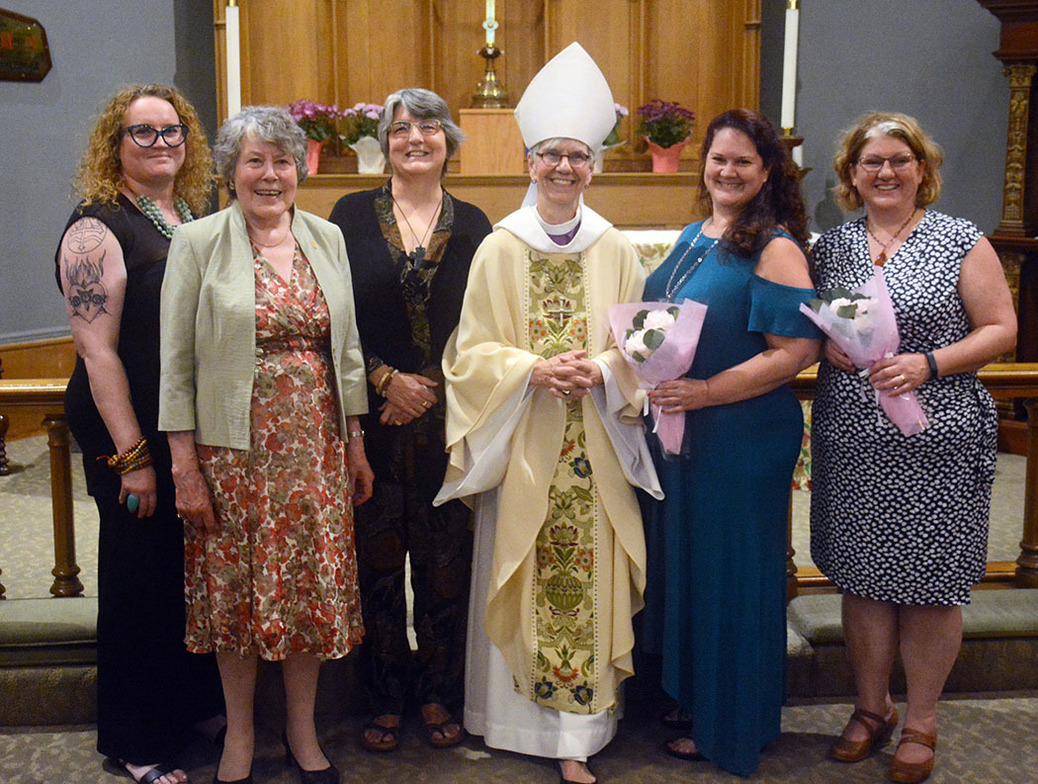 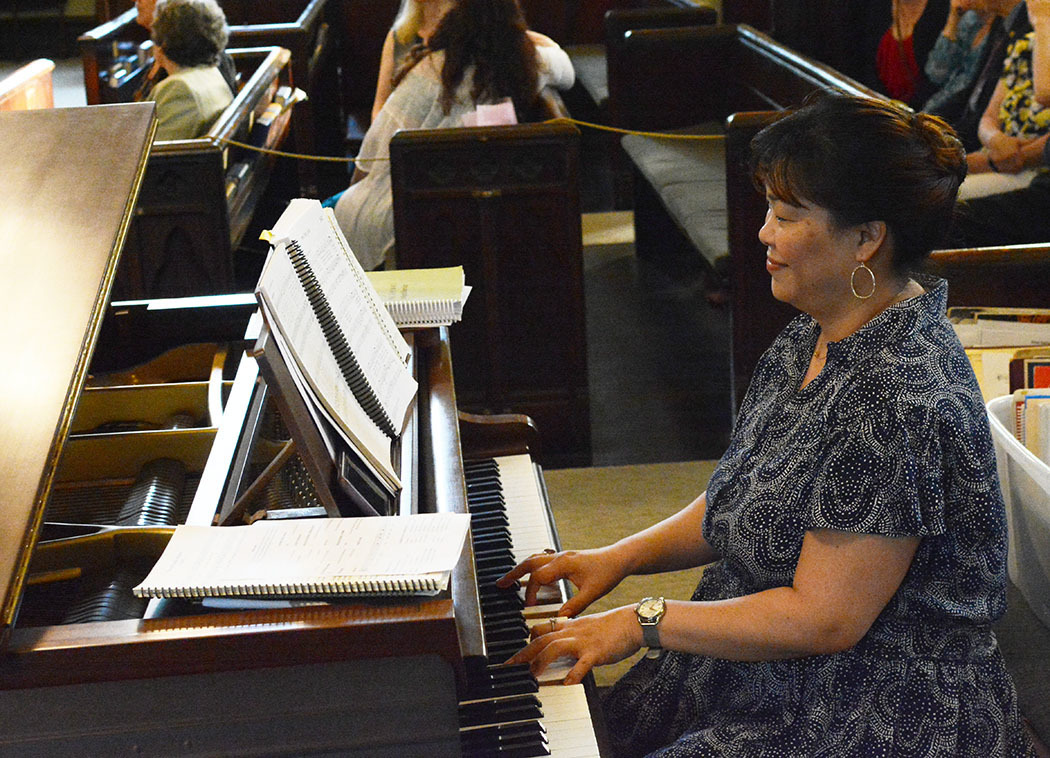 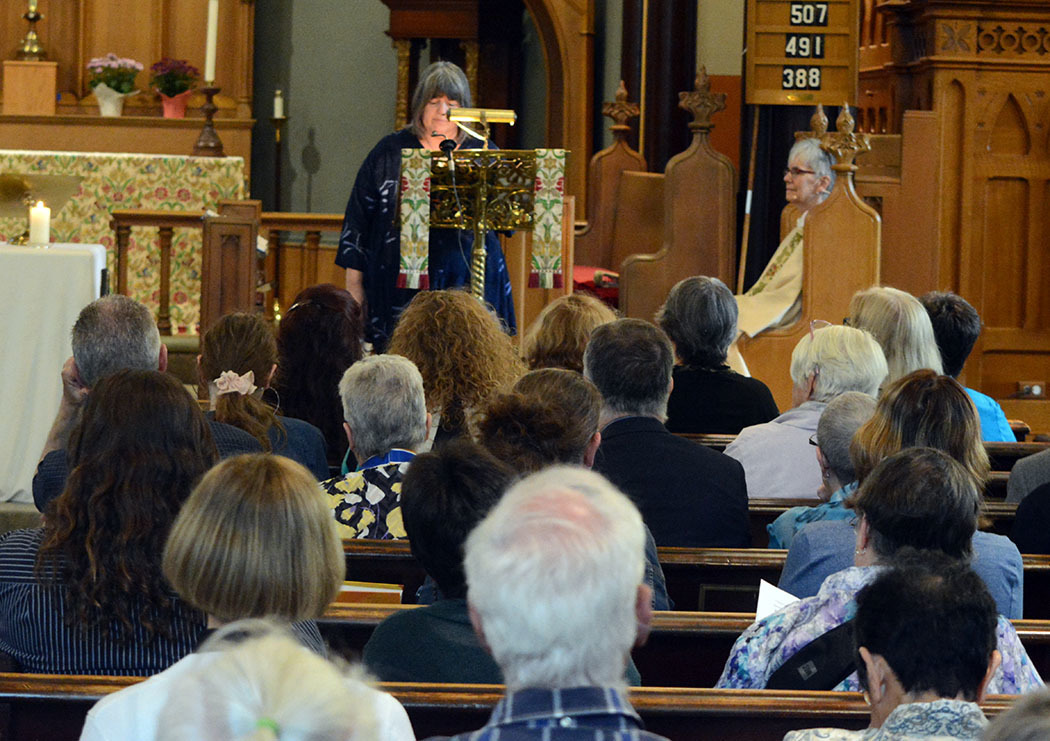 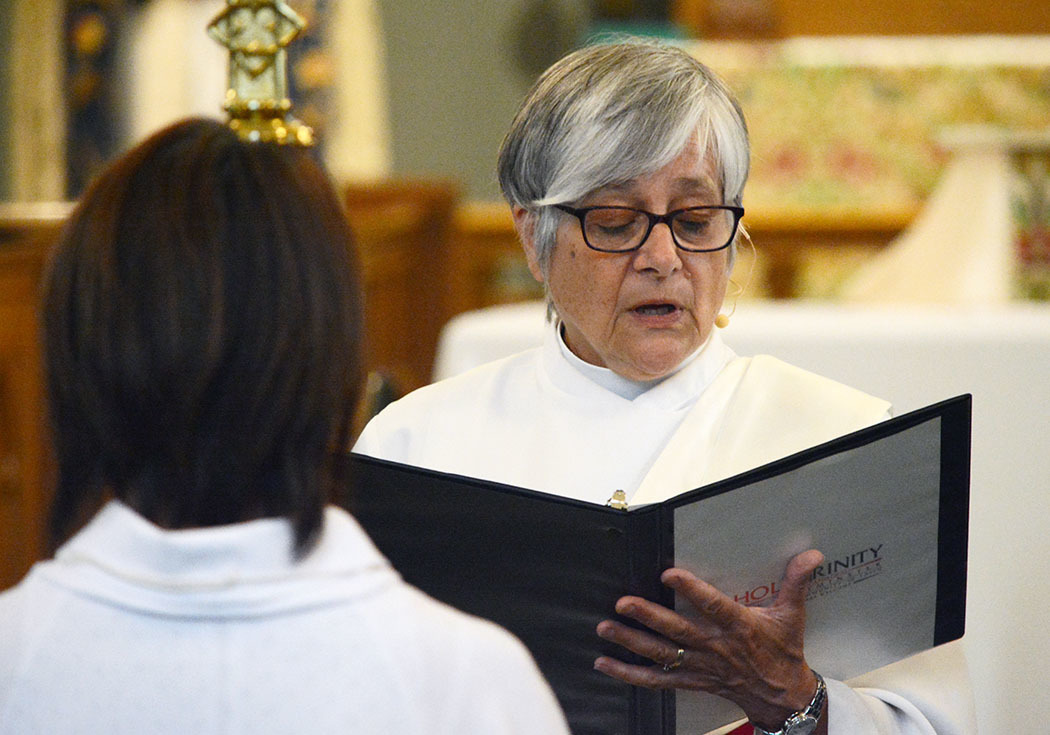 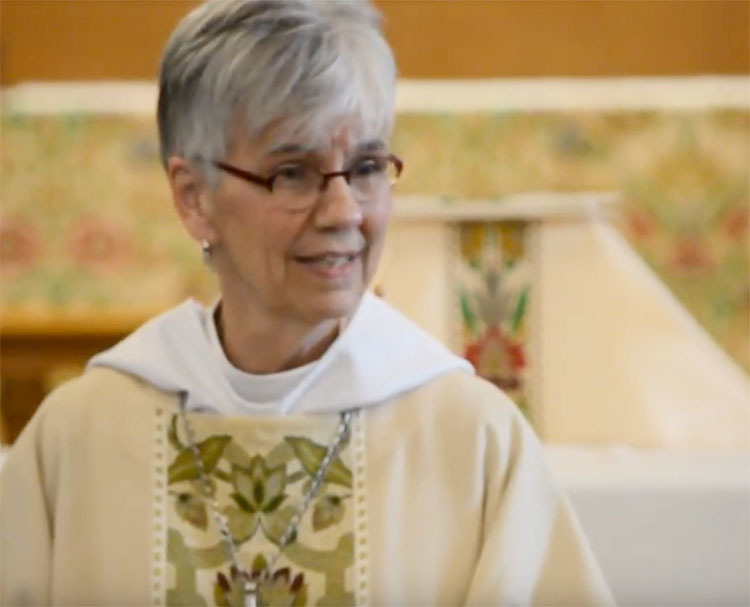 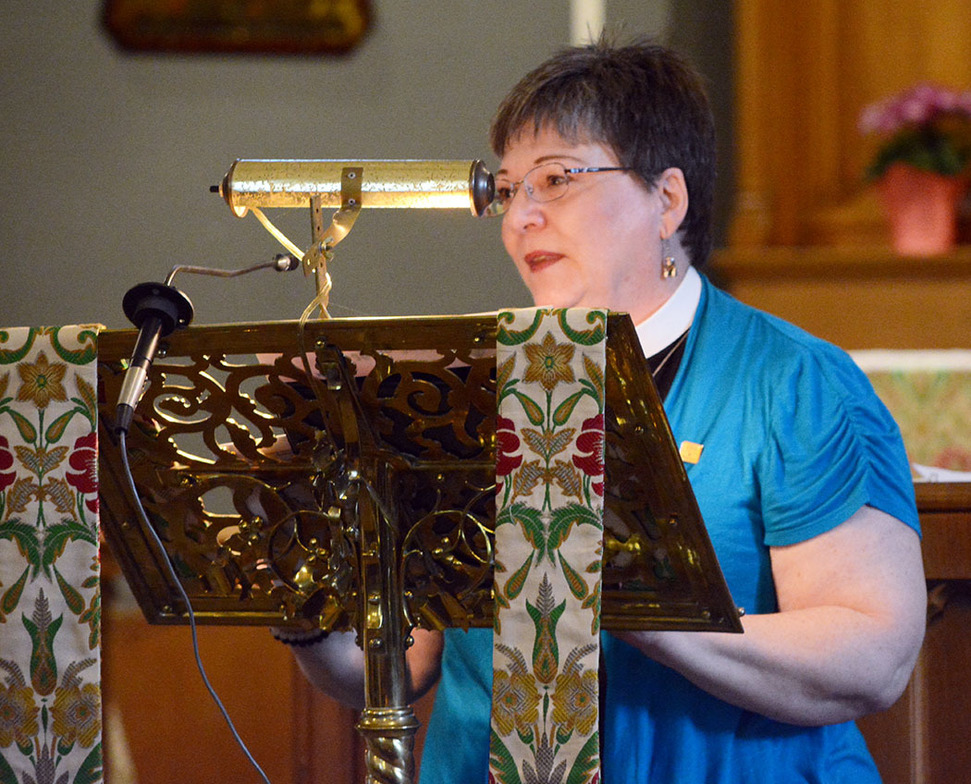 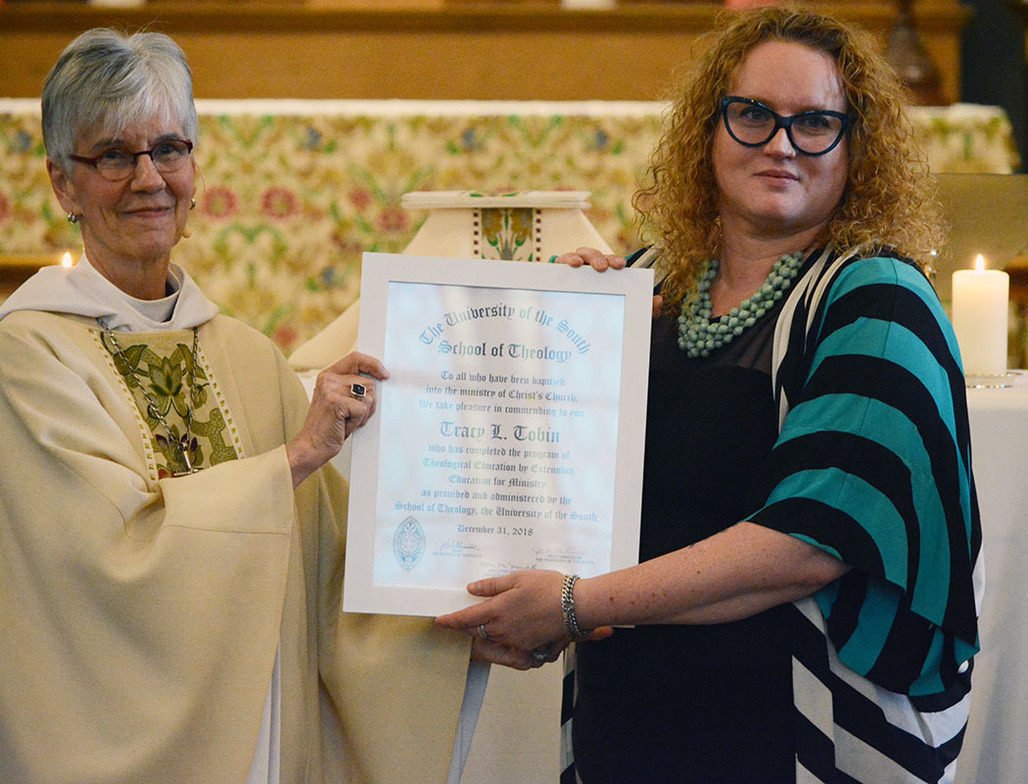 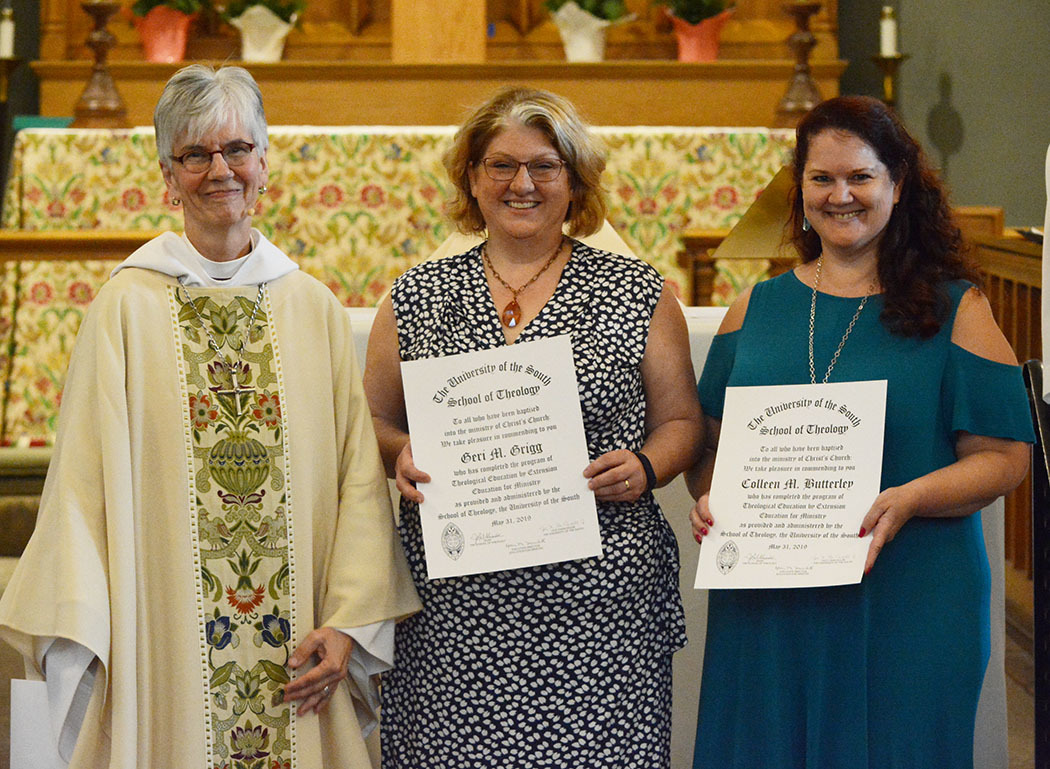 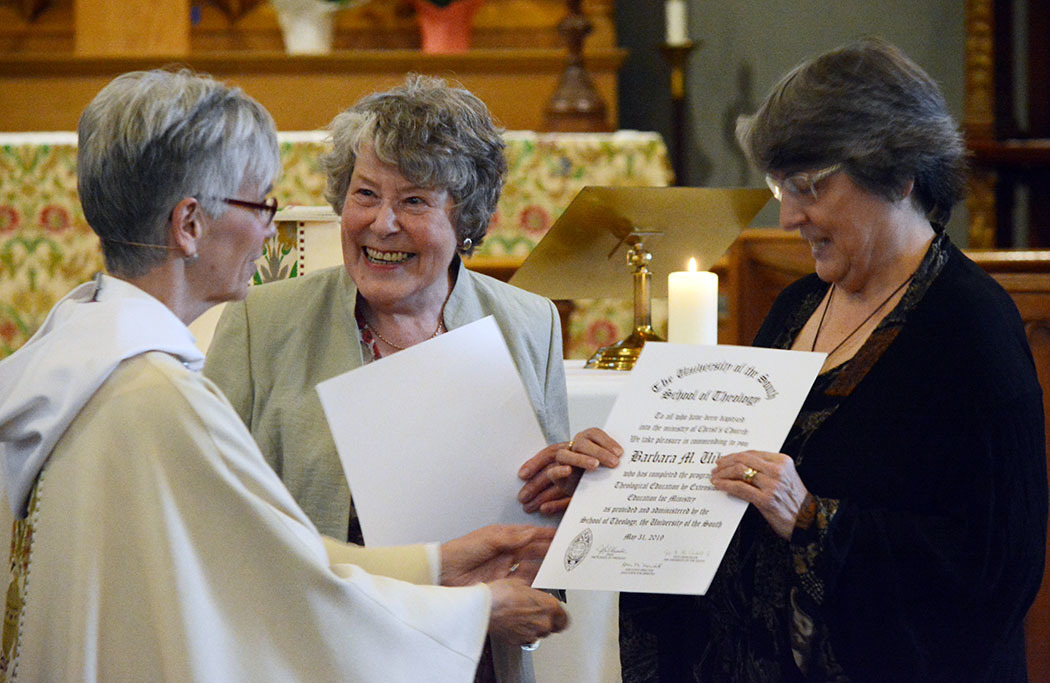 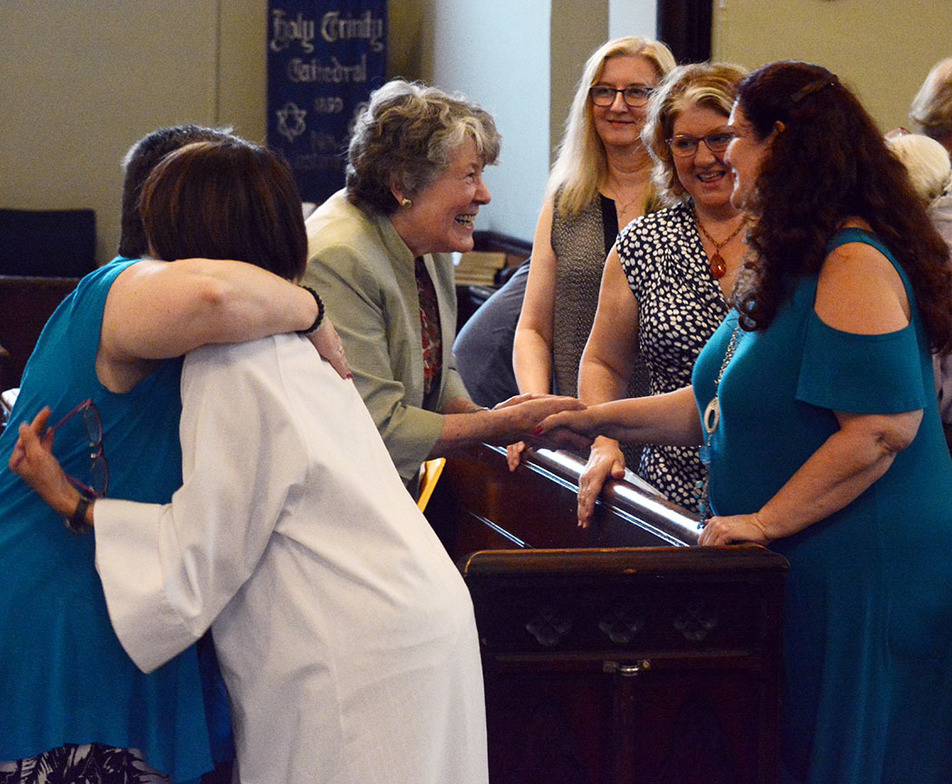 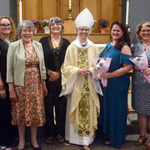 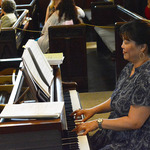 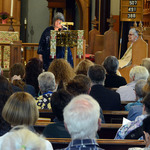 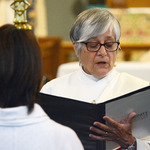 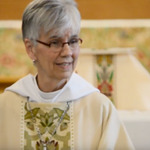 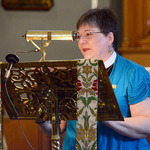 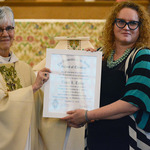 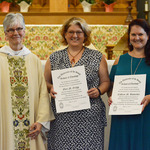 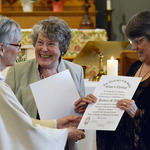 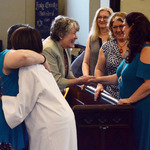 Many of the people in attendance were EfM graduates and students, and many of the grads in that group have served or are currently serving as mentors. Deacon of the Word and Table for the Eucharist was the Reverend Anne Anchor who concluded her 14 year ministry as EfM Coordinator in 2015. Current Coordinator, the Reverend Paula Porter-Leggett, Vicar of St. Alban’s, Richmond organized the liturgy with Archbishop Skelton and introduced the graduates as they received their certificates.

Others involved in the liturgy were: the Venerable Richard-Leggett, Archdeacon of Westminster and Vicar of Holy Trinity, New Westminster; Deacon, the Reverend Carol Neilson, Archbishop’s Chaplain; Reader, Connie Keen of St. Laurence, Coquitlam; Musician Kyu Min Lee-Sigerson; and Deacon, the Reverend Juanita Clark of St. John the Evangelist, North Vancouver led the Prayers of the People.  Many thanks to Greg Kennelly, ODNW for welcoming the congregation and distributing the order of service bulletins.

Archbishop Skelton’s connection with EfM is a compelling one and it goes back to 1978, when she was living in Tennessee, a new member of the Episcopal Church, spouse of a first-year Episcopal seminarian and mother of two young children. At this point in her life and in her faith journey she was looking for an experience of community and in first hearing about EfM from a person she met at a party she realized that this might be what she was seeking. She began attending, she committed to the program and needless to say became very much a part of EfM, immersing herself in the learning. After three years she was asked to become a trainer. She agreed, which at the time gave her the distinction of being the youngest EfM trainer in the Episcopal Church.

The first two thirds of Archbishop Skelton’s homily looked at her experience with, and her observations of, the Education for Ministry experience. She described the atmosphere as “intimate tension”. In her sermon she said:

“This intimate tension comes from a number of things… a heightened awareness of myself, my questions, my history, my assumptions, my ignorance… a heightened awareness of those same things about others in the group; their questions, their ignorance, their personalities, their communications styles… a hyper-awareness of all these things. An intimate tension as well with engagement of Scripture and other readings that challenged everyone… And of course intimate tension in the theological reflection process itself, based on the stuff of our lives, especially in those moments when we felt a kind of tension within ourselves, a kind of being pulled in two different directions…simultaneously. And of course, what I came to learn is that this intimate tension is a hallmark of an Anglican Christian life. For from the beginning we were a church that stretched to hold itself together despite differing perspectives on theological, spiritual, liturgical and pastoral matters. We are a church of intimate tension, one that comprehends complexity, and that finds intimate tension in the midst of the complexity to be a rich, creative…and at times annoying way of living.”

(A video of Archbishop Skelton’s sermon is available here on the diocesan website.)

EfM Coordinator for our diocese, the Reverend Paula Porter Leggett supplied some additional information about the graduates and upcoming EfM activity.

“Tracy Tobin completed her 4th year last December, she trained as a mentor last summer and has been co-mentoring the two Christ Church Cathedral groups with Ken Pepin and James Berger. The CCC groups run January to December.

Colleen Butterley and Geri Grigg are from the group that meets at St. John the Apostle, Port Moody. This group originated at St. Stephen’s, Burnaby in the late 1990s and moved to St. John’s. The current co-mentors are the Reverend Anne Anchor and Debra Jones-Akiyama.

Presently groups in the Diocese of New Westminster starting in September include: St. John the Apostle, Port Moody; St. Hilda’s, Sechelt and a Chilliwack group will form with the venue TBC. Mentors will be the Reverend Jennifer Burgoyne and John Bower.

As mentioned earlier CCC will start up in January with two groups.

Any individual or group interested in starting a new group or joining an existing group will need to do so through Paula. The EfM community would be delighted to have more EfM groups in our diocese.

More photos with captions available in a photo album at Anglican Conversation, the Facebook page of the Diocese of New Westminster