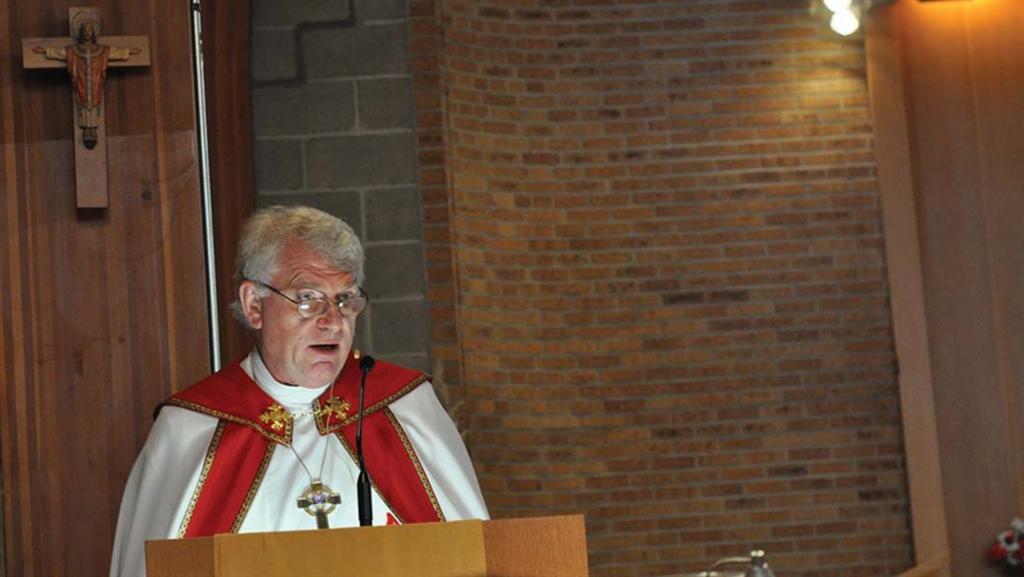 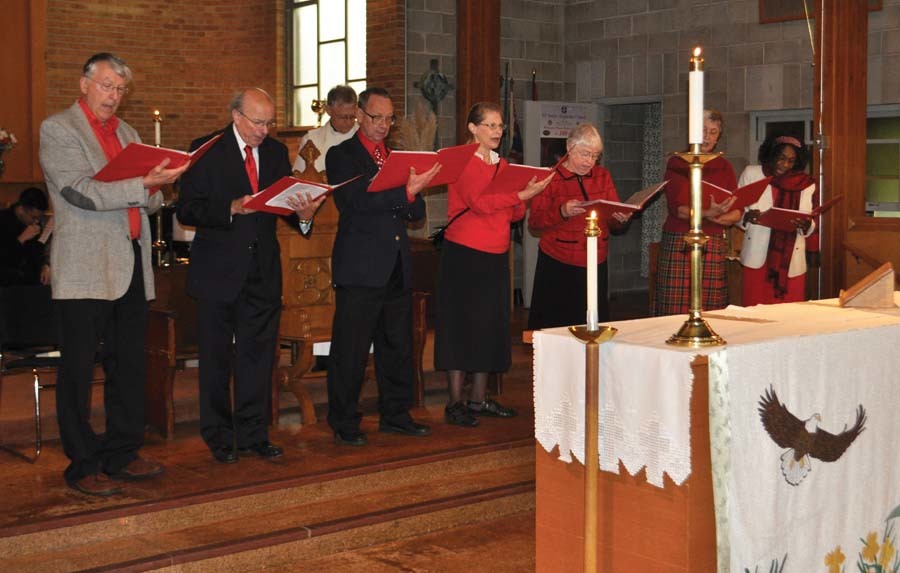 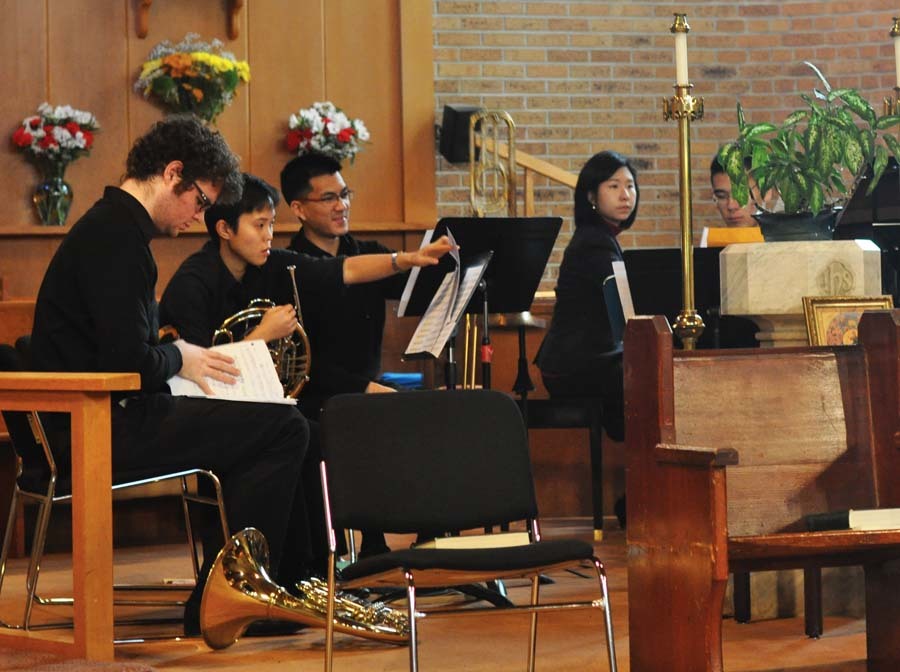 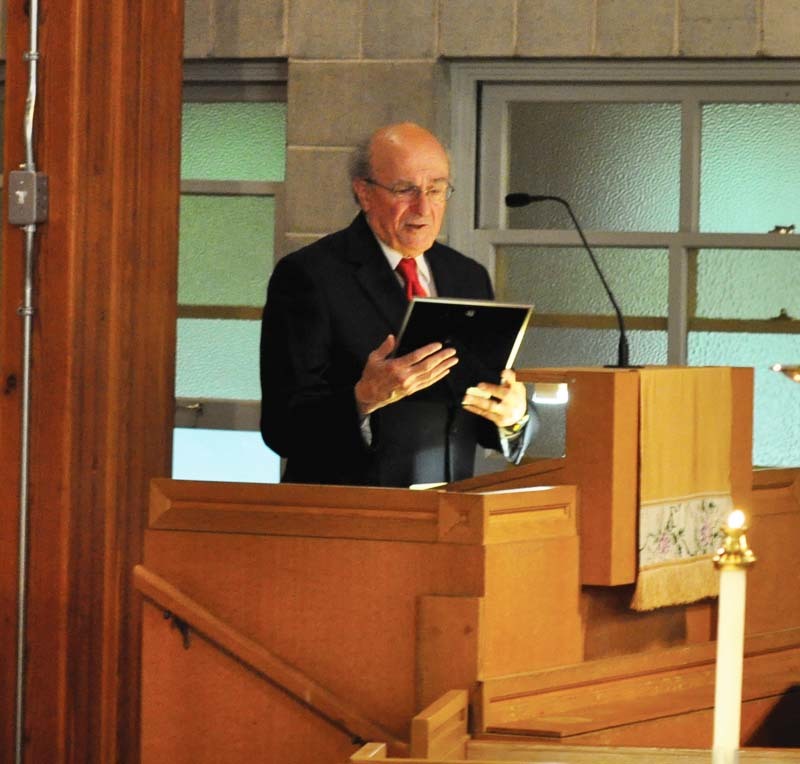 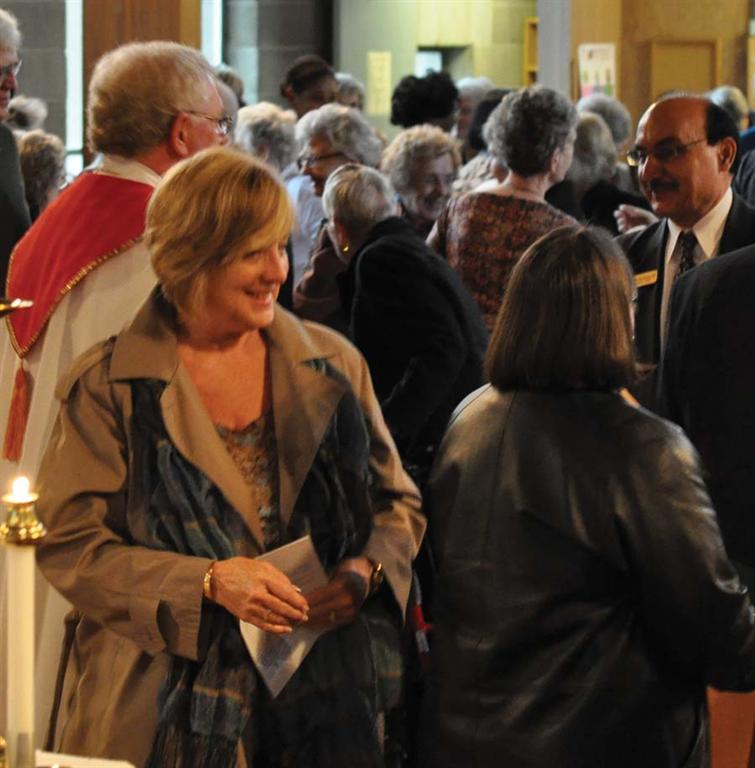 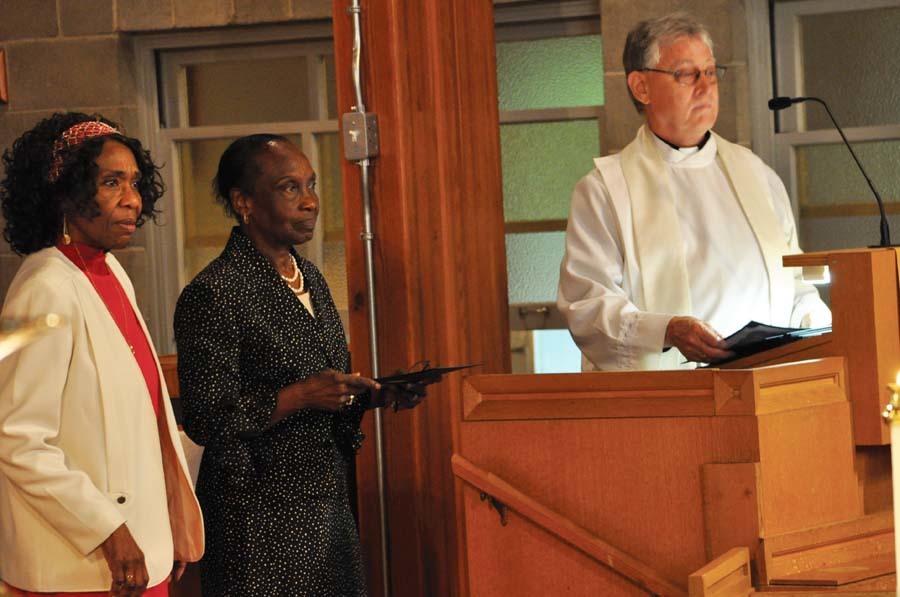 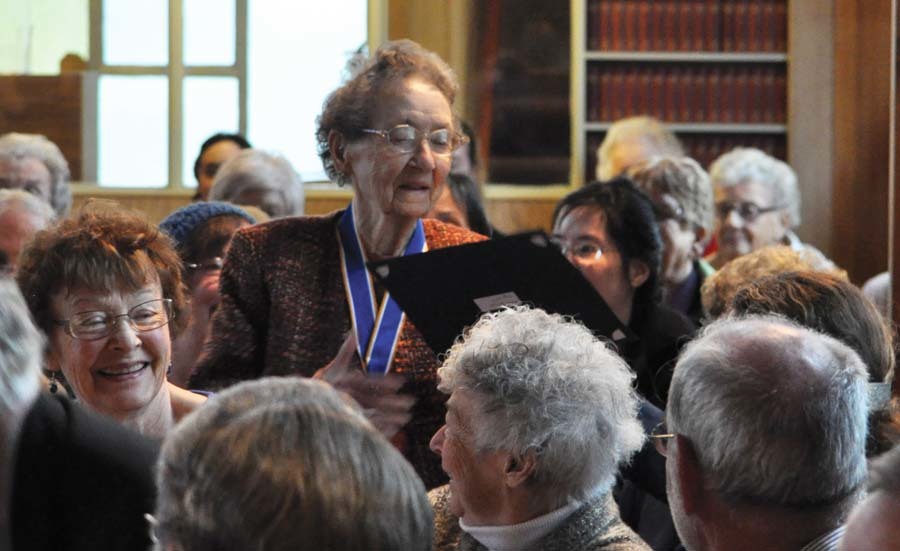 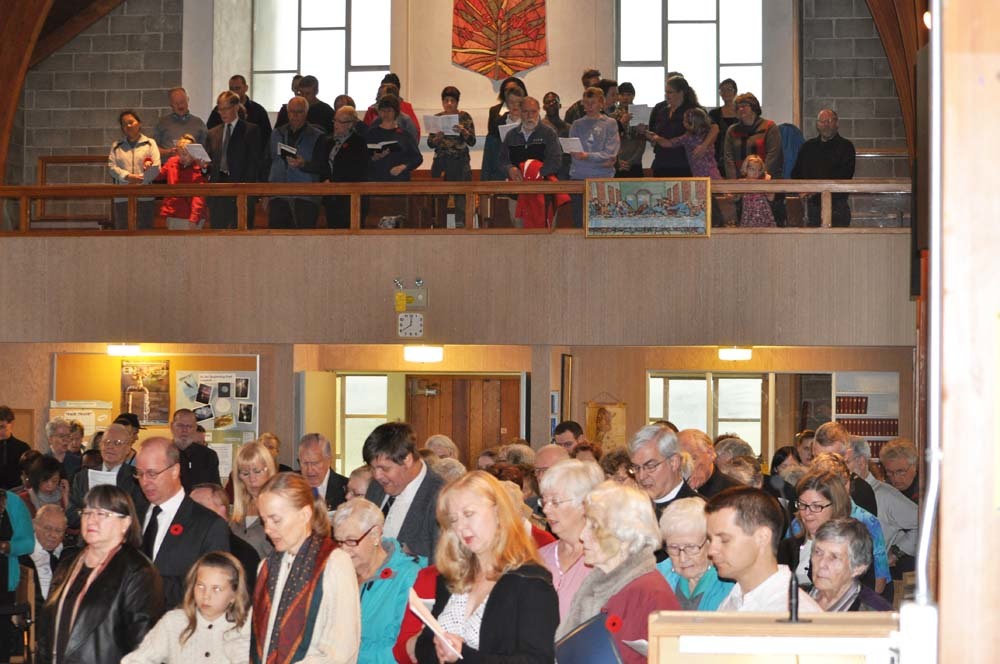 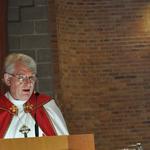 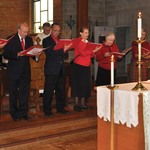 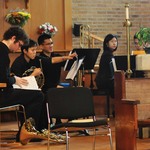 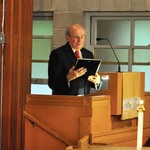 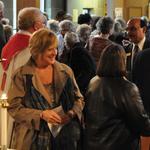 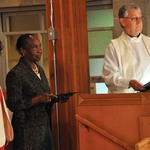 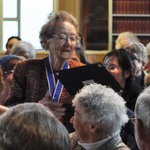 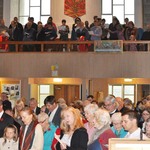 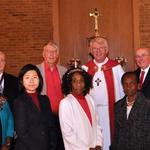 Back in 1911, and 1912, the towns of Vancouver and Burnaby were growing like crazy, welcoming thousands of new immigrants every year, mostly from Western Europe and most of them from the UK and Eastern Canada. As neighbourhoods developed so did the need for the neighbourhood church and that was how All Saints began, as a church plant of St. John’s, Burnaby, located a few kilometres away near Central Park. The new Anglican Church was built in the neighbourhood quite near Dundonald Methodist Church, a congregation that began in 1908, moving into its own building also in 1912 on Gilley Avenue. This church in 1925, became Dundonald United and in 1950, South Burnaby United.
The current Minister, Jennifer Goddard-Sheppard and members of the congregation of South Burnaby United attended the Celebration of the Eucharist and 100th Anniversary at All Saints on November 4th, 2012. This ecumenical fellowship added to the neighbourhood feel of the event . Burnaby-Edmonds MLA, Raj Chouhan was also present. The liturgy was comfortable, it felt like a reunion, where people who know each other and like each other have gathered for the eucharist, to walk in faith together and glorify God.
Prior to worship, a brass quartet with the occasional addition of a flautist (making it a wind quintet) under the direction of All Saints’ Director of Music (referred to as “Pianist and Teacher” in the service bulletin), Charmaine Liu played music as worshippers found their places in the nave and gallery. At 9:55am the choir of All Saints moved to the front of the chancel behind the altar and offered an inspired choral prelude supported by Charmaine on the piano and organ.
By the time the procession concluded, the sanctuary of All Saints was extremely full prompting Bishop Michael to say , “We meet every Sunday morning here for worship at 10 am” which solicited laughter from the congregation.
The Celebration of 100 Years of All Saints Eucharist and luncheon was the third event of a busy weekend that began with a Concert on Friday night and a well-attended Parish Dinner on Saturday evening.
Bishop Michael began his sermon by remarking on the fact that many present at worship had participated in the celebratory dinner the night before and from his vantage point at the pulpit a few folks appeared to be “listing to starboard.” He thanked All Saints, rector, The Reverend Randolph Bruce for his ministry and reminded the congregation that as Regional Dean, he and Randolph share responsibility for pastoral care of Anglicans in Burnaby.
Prior to the final hymn, Bishop’s Blessing and the dismissal there was a section of the service titled “Sending out!” in the service bulletin. This consisted of greetings to the All Saints community. Provincial MLA Raj Chouhan was unable to remain for the entire service so his GREETING was read by Greg Kennelly (please click the link to access the official document). Greg also read the greeting from Burnaby-New Westminster MP, Peter Julian and a transcription of Peter’s announcement in the House of Commons October 31st in reference to All Saints centennial November 2nd, 2012. Click to link to the YOUTUBE POSTING. Next up, was South Burnaby United Minister, Jennifer Goddard-Sheppard who said that she was “new” but these “relationships are old” and that she and the South Burnaby United community are happy to have shared these last 100 years with All Saints and they look forward to the future ministry in the neighbourhood with All Saints.
The final segment of “Sending out!” was a Feast of All Saints tradition created by long-time rector, The Reverend Dr. Donald Grayston (who was also in attendance) called Honouring our Lively Saints.
Randolph, from the lectern, assisted by wardens, Norma Stephenson and Hales Jones, announced close to a dozen recipients of the “Lively Saints” honour and after each name was announced the Lively Saint stood and Norma and Hales moving rapidly throughout the nave and gallery handed them the certificate. The last recipient was Margaret Shreck, ODNW who has been a member of the All Saints, South Burnaby faith community for 72 years. As she accepted the honour the entire congregation erupted in a sustained ovation.
This was truly a joy-filled celebration and a great way to observe the Feast of All Saints, 2012.

Images: Top and Homepage, the All Saints choir offers a choral prelude. Upper left, the Wind Quintet with Director of Music, Charmaine Liu seated at the piano. Upper right, Bishop Michael preaching. Middle left, the exchange of the Peace, centre Bishop Michael and MLA, Raj Chouhan move to greet each other. Lower right, Greg Kennelly reads the Greeting from the MLA and MP. Lower left, The Reverend Randolph Bruce and wardens, Norma G. Stephenson and Hales Jones, distribute the “Lively Saints” Awards. Below: 1, The Congregation bursts into applause as Margaret Schreck, ODNW is honoured as a Lively Saint. Below 2, The congregation sings the final hymn, "We Shall Rise Again."