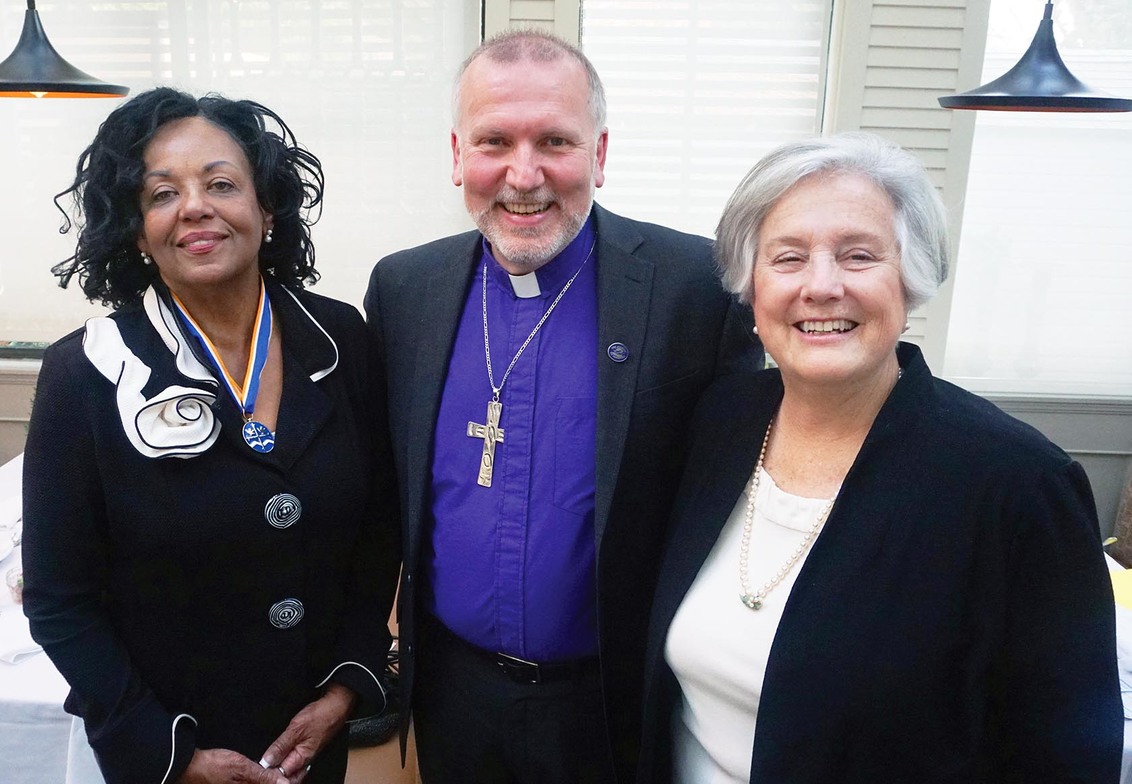 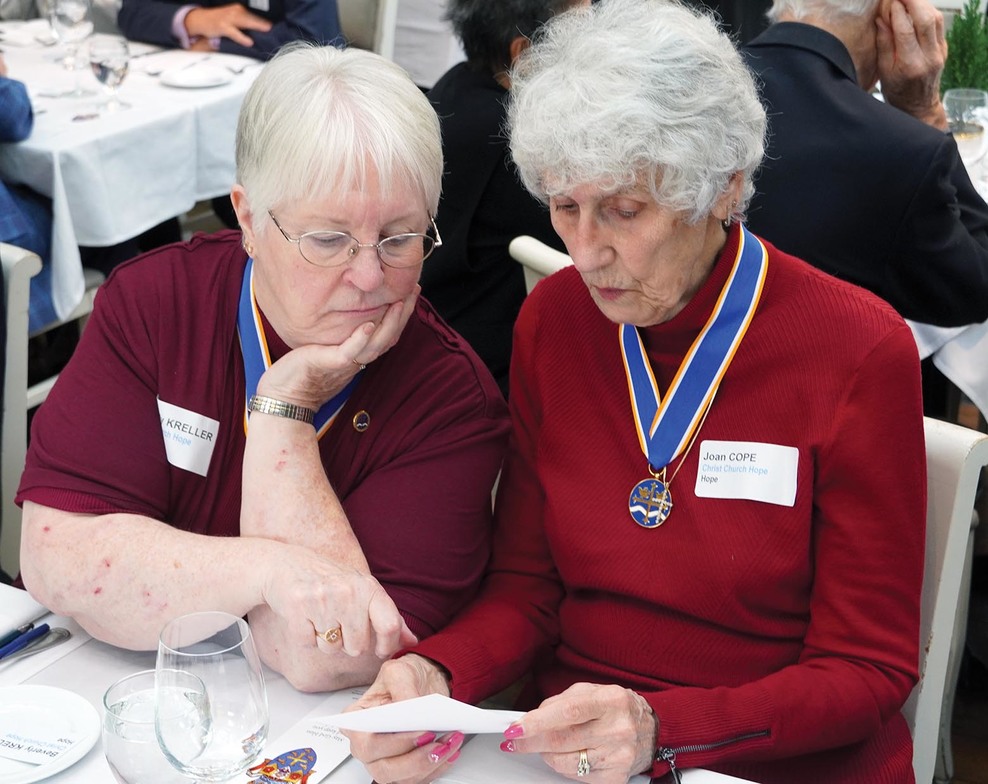 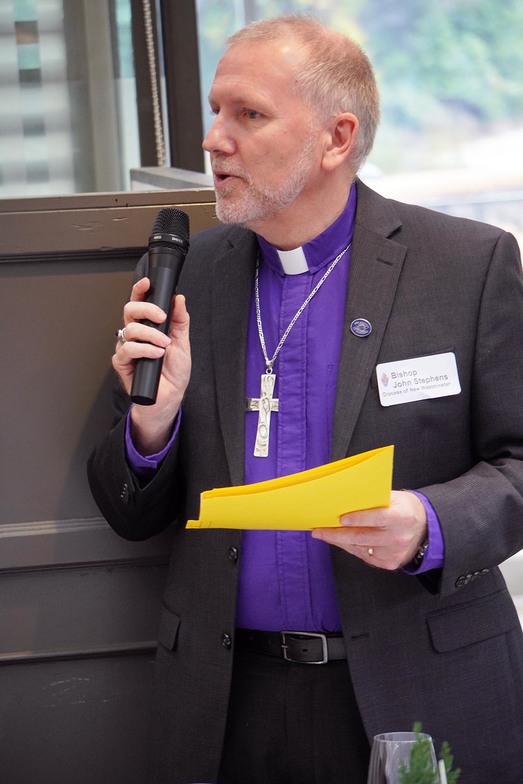 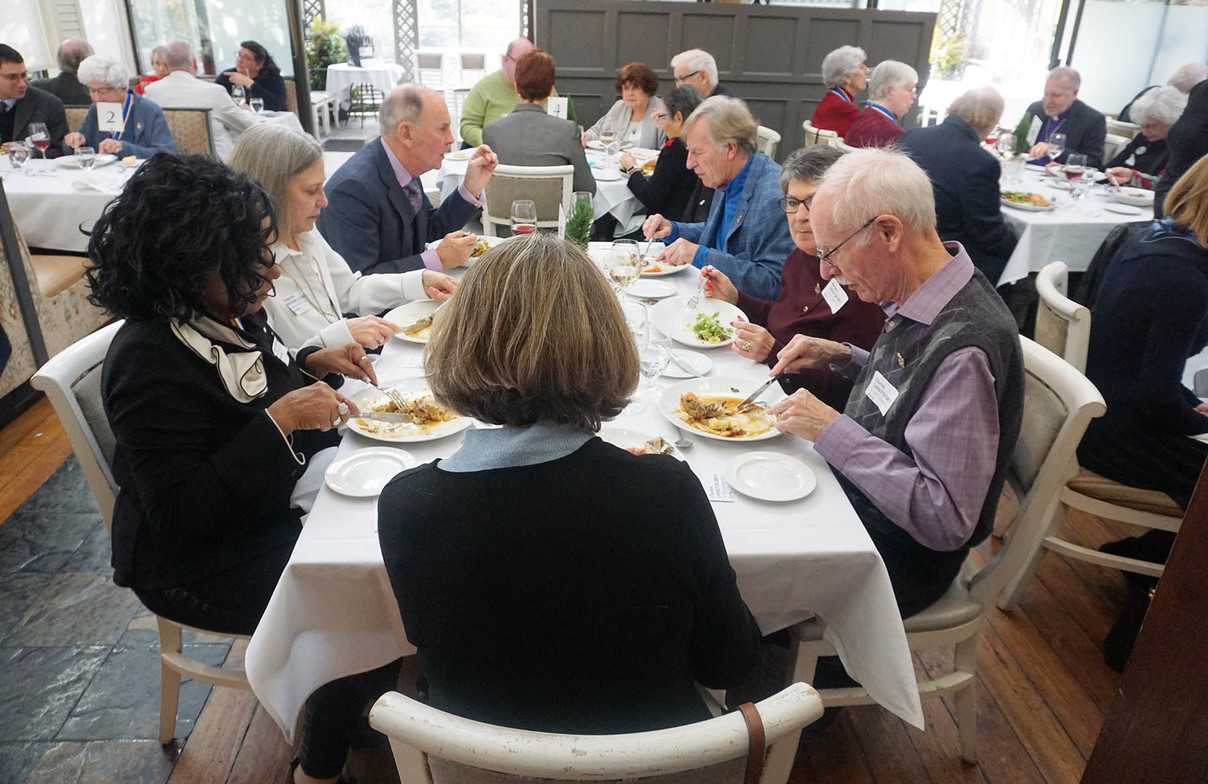 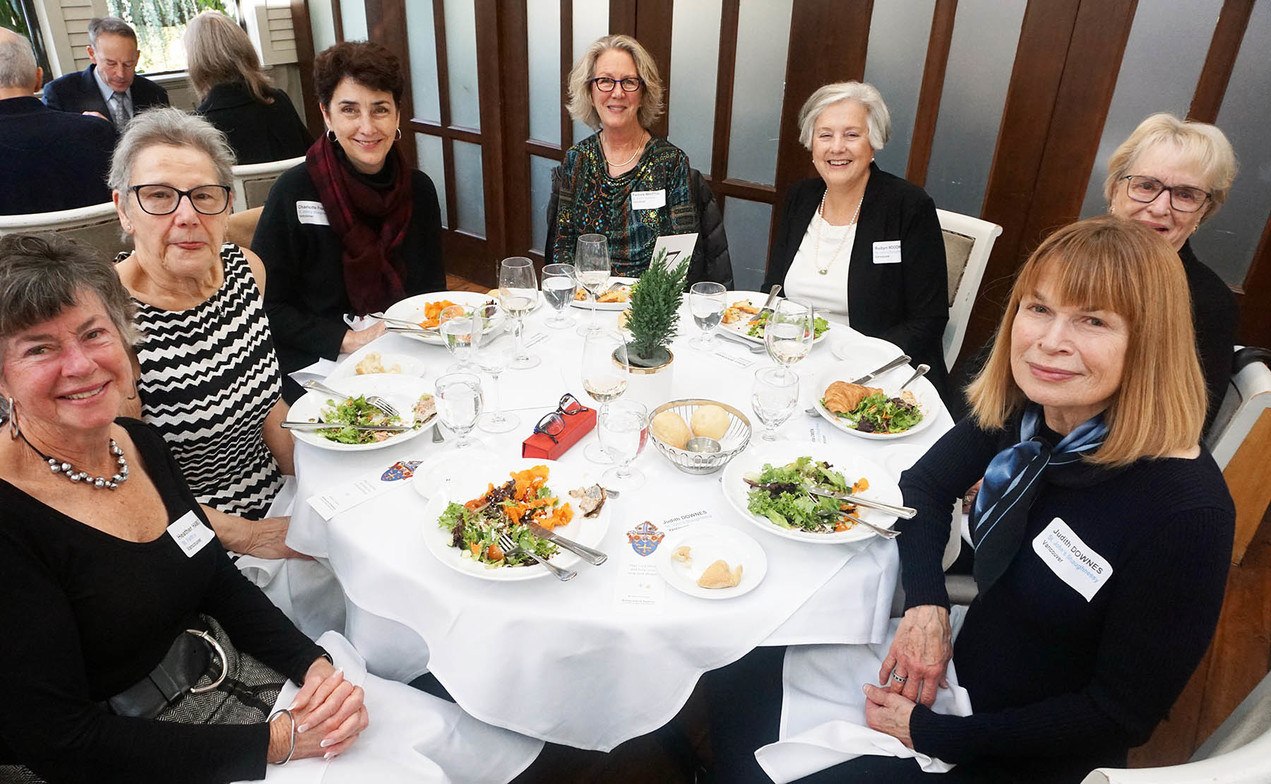 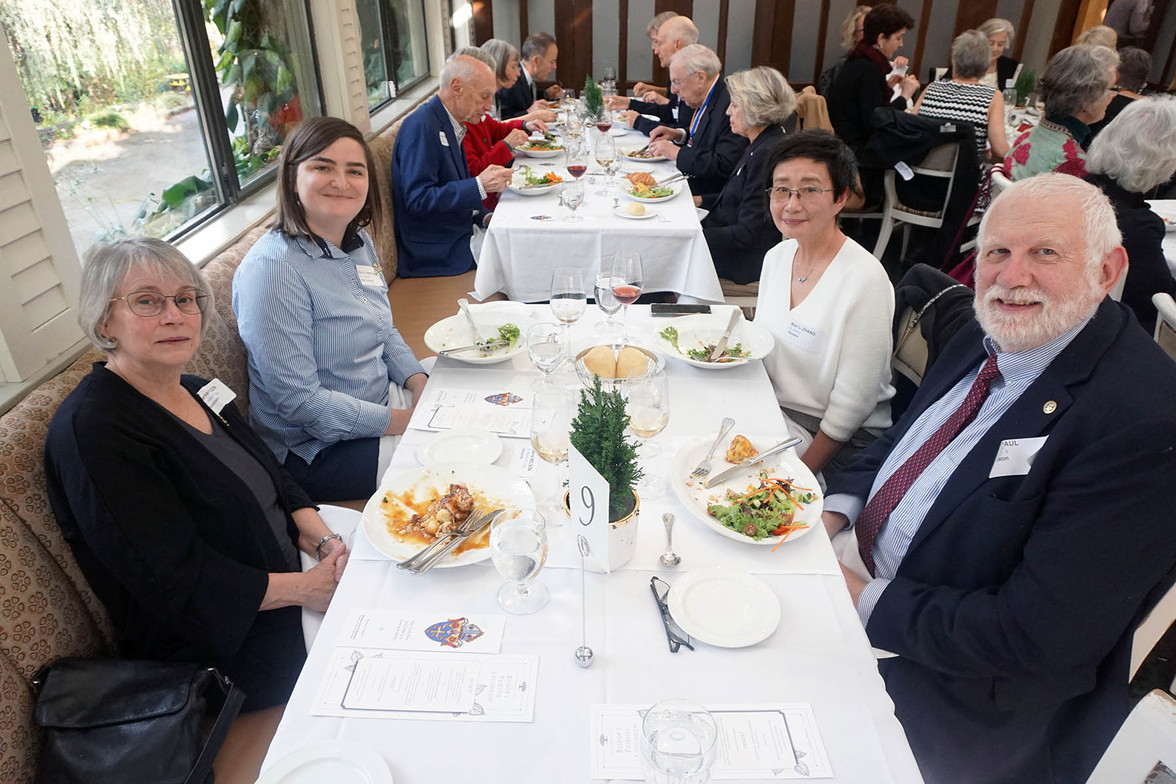 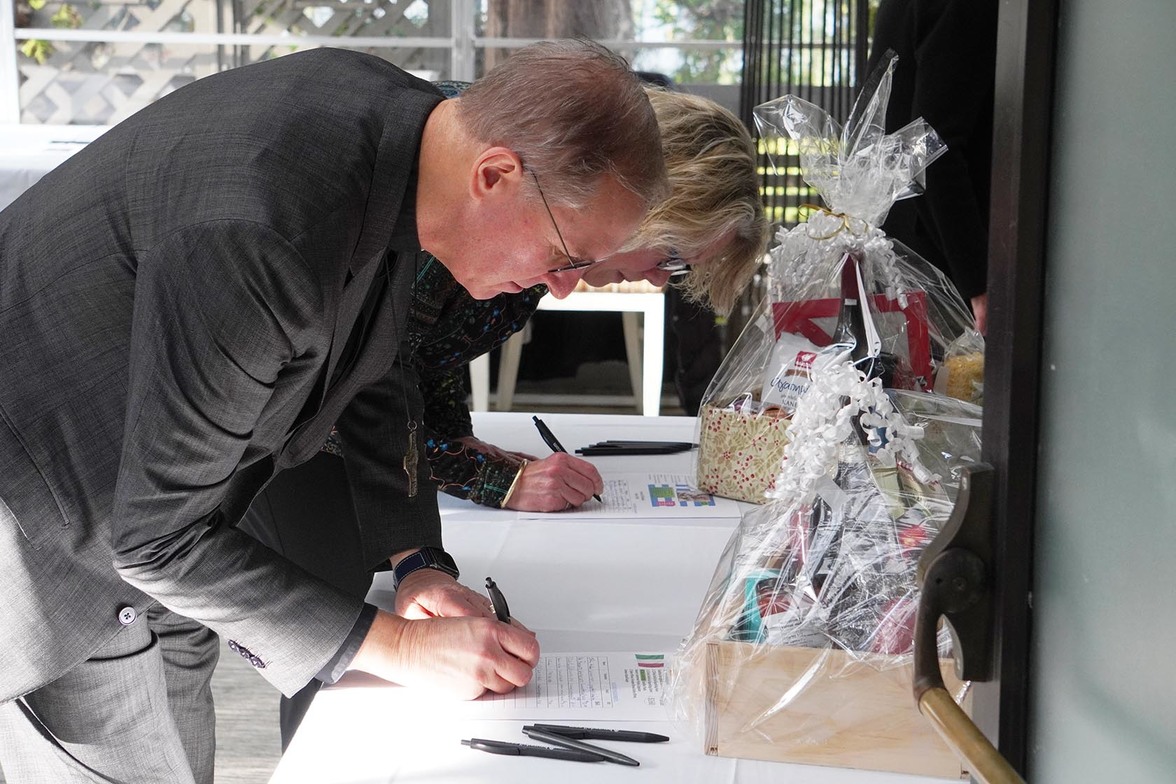 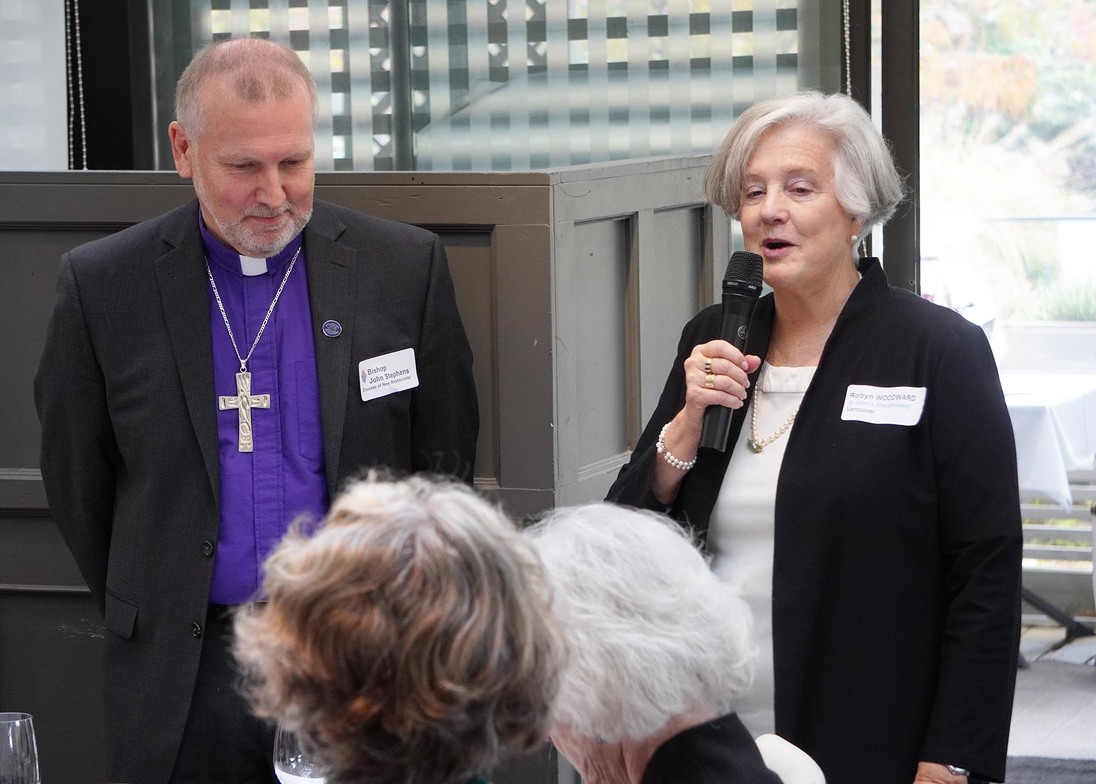 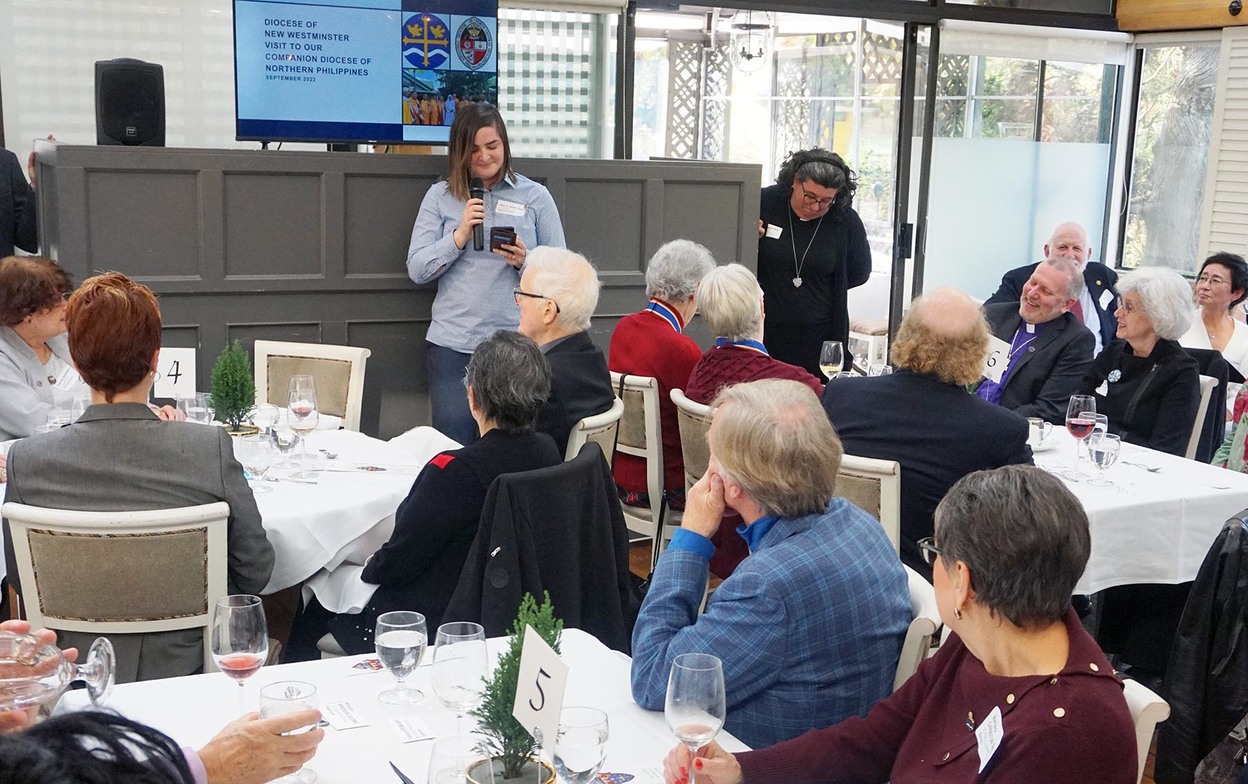 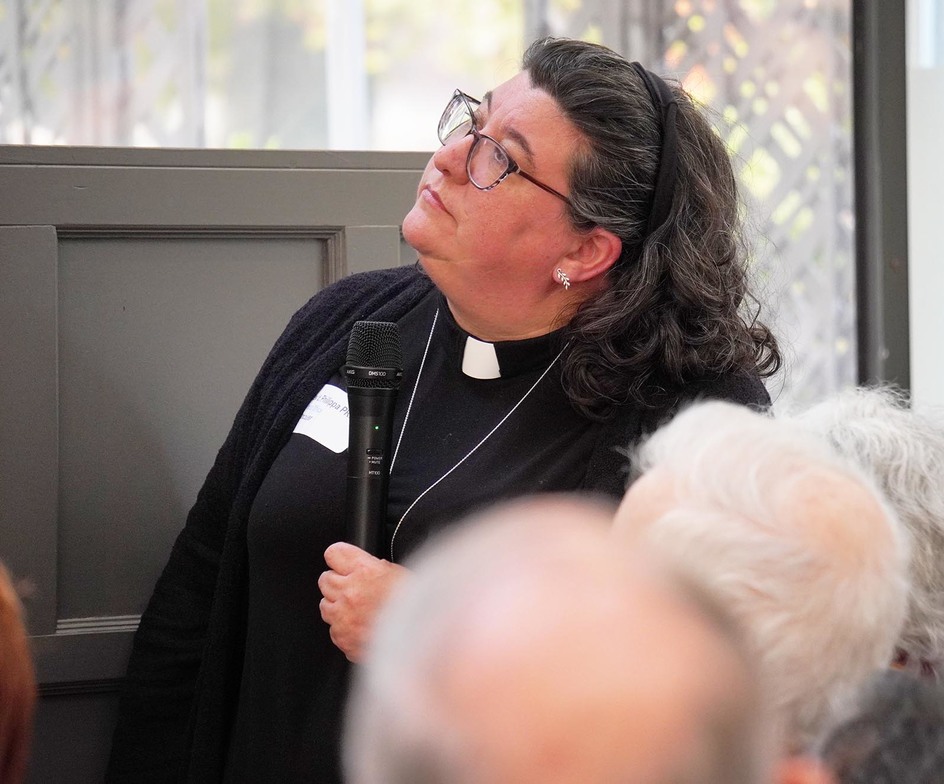 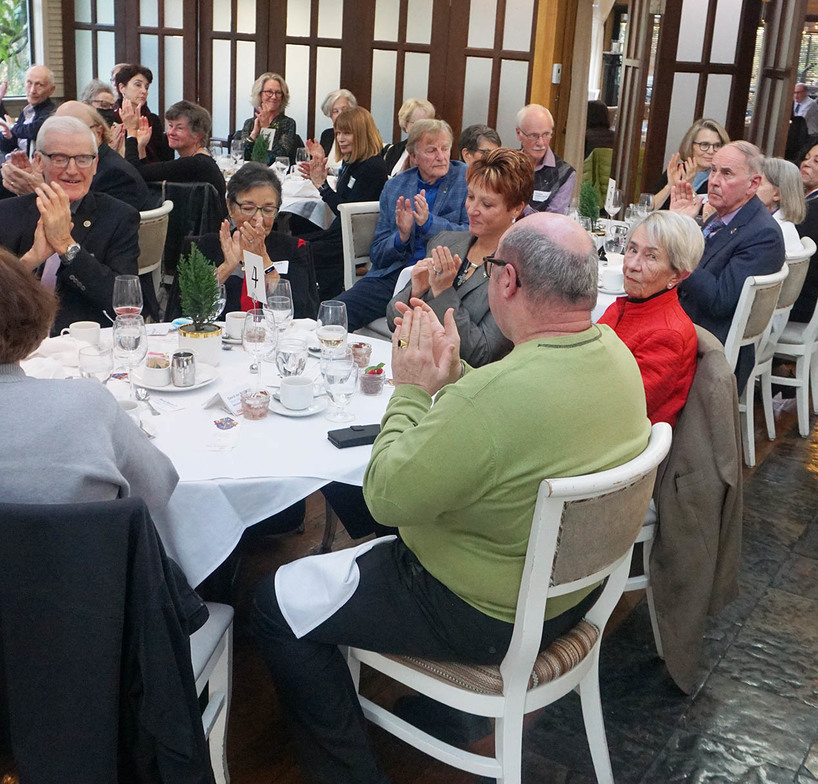 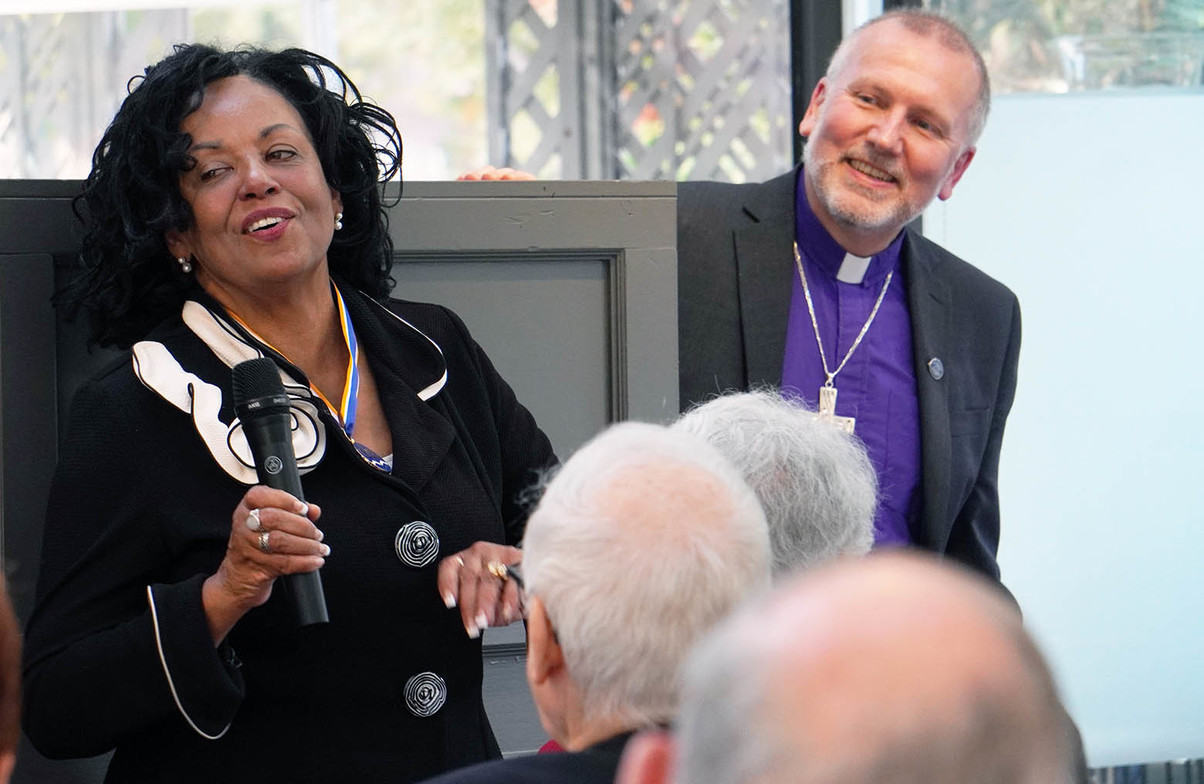 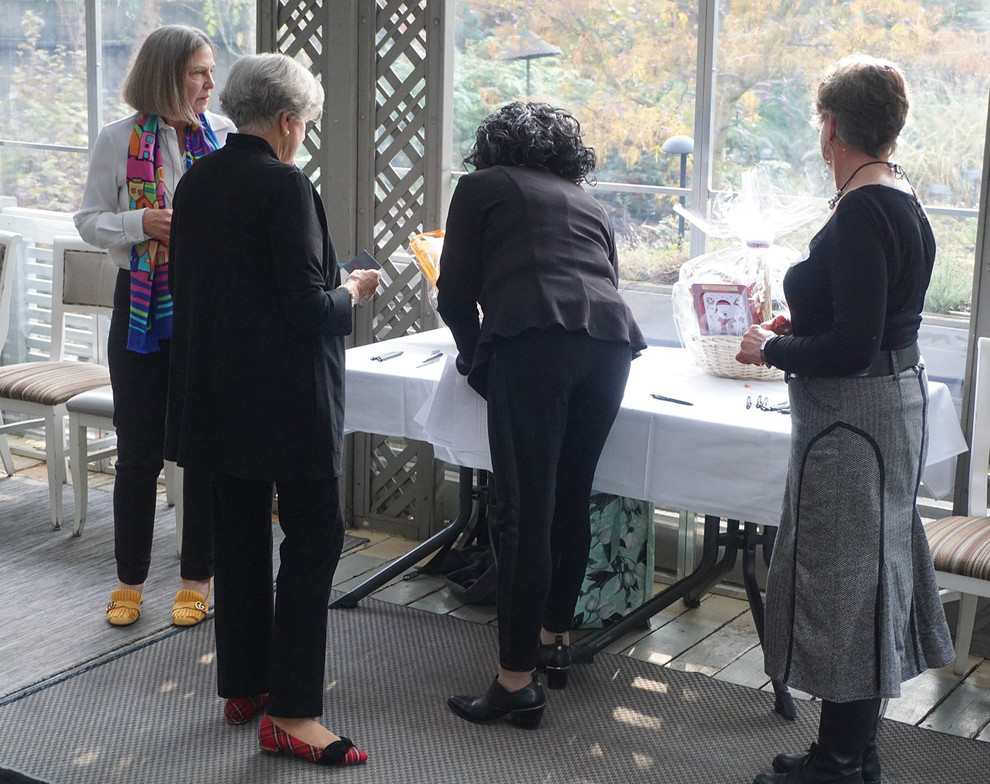 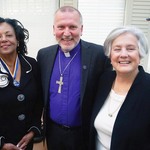 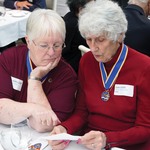 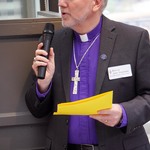 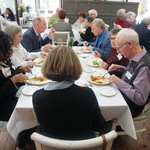 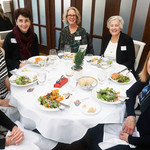 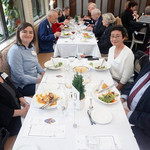 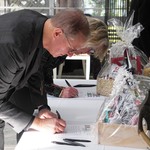 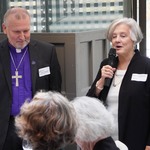 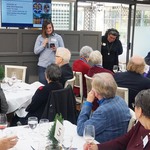 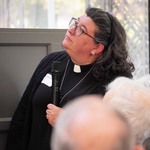 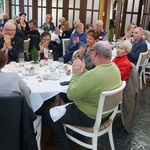 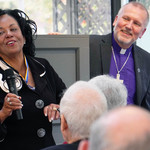 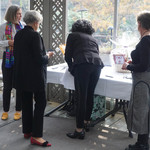 The Bishop’s Friends is a diocesan-wide group with approximately 60 members, united with the specific goal of supporting the ministry of the bishop, usually, but not always with financial assistance for ad hoc projects that are not part of the bishop’s day to day ministry.

The 2022 gathering took place on Wednesday, November 16, 2022, at The Shaughnessy Restaurant, located on the same Oak Street property footprint as the Van Dusen Gardens. The twist mentioned in the title is that this year the event was a luncheon, not a dinner, with a start time of 12pm and a wrap-up between 2 and 2:30pm. The co-chairs, Joan Stewart, ODNW and Robyn Woodward, ODNW both from the Parish of St. John’s, Shaughnessy had reserved the western section of the large restaurant which contains a dining space for 50 guests and a small presentation area, through two doors to the west is a spacious solarium. The solarium was where the silent auction items were staged, and guests were encouraged to spend some time in that space, browse, and bid on a variety of gift baskets and more.

Bishop John Stephens and the co-chairs were at the venue well before 12pm to greet the guests as they arrived. Everyone was delighted to see Beverly Kreller, ODNW and Joan Cope, ODNW of Christ Church, Hope who’d left their homes in the eastern Fraser Valley early in order to reach the Vancouver restaurant on time. Once the lunch orders were taken (there were three delicious choices: fresh Steelhead filet on a bed of spring greens; roasted chicken breast with lemon basil sauce, potatoes and arugala; a hot shellfish and cheese filled croissant served with salad) Bishop John took to the microphone, thanked everyone for their support, particularly the Bishop’s Friends’ financial support of the September 7-18, 2022 trip to attend the Consecration and Installation of the Right Reverend Benny Lang-akan, the new bishop of the Diocese of New Westminster’s Companion Diocese, the Episcopal Diocese of Northern Philippines (EDNP). The bishop also thanked them for their presence at the lunch and led the group in a prayer of thanksgiving for the food about to be received.

After lunch, the bishop and co-chair, Robyn Woodward introduced after-luncheon speaker, the Reverend Helen Dunn, Rector of St. Clement, Lynne Valley and Regional Dean of North Vancouver. The Reverend Dunn was one of the members (with: Bishop John Stephens, Ruth Stephens, the Venerable Douglas Fenton, the Reverend Wilmer Toyoken, the Reverend Philippa Pride, Jean Kyle and Elizabeth Ferguson) of the diocesan cohort that travelled to the Philippines in September. She told the story of ‘The Broken Toilet’ which produced gales of laughter from the audience but at the same time helped to connect everyone with the world of those who live in the Companion Diocese of EDNP. The text of the Reverend Dunn’s talk is included in this post.

After the ‘talk’, the Reverend Philippa Pride, currently Special Assistant to Bishop John Stephens (who will succeed the Venerable Douglas Fenton as Executive Archdeacon of the diocese and Archdeacon of Vancouver upon Fr. Fenton’s retirement at the end of this year) guided the audience through a two dozen slide PowerPoint presentation that served to illustrate the experiences of the D of NW group during their time in EDNP. The cohort were not just there for the consecration, they also visited many different parishes where the clergy members of the group participated in the liturgy as presider and preacher and the lay members prepared talks about their home parishes to share with the EDNP folks. The D of NW folks were also welcomed as guests into the homes of designated members of the EDNP parishes that they visited.

Following the Reverend Pride’s presentation, Bishop John opened the floor for questions, with several guests asking not just about the differences of worship, mission and ministry in EDNP but the similarities as well. The Bishop’s Friends who attended the luncheon will all have a closer and more relevant connection to EDNP and to their ‘partner parishes’ when they gather in their parishes to pray for the Companion Diocese during the Prayers for the People at Sunday worship.

Before concluding the luncheon with the Episcopal Blessing, Bishop John acknowledged the Venerable Douglas Fenton who will retire at the end of the year, the Bishop's Friends gathered responded with sustained applause for the Executive Archdeacon.

Anyone who is interested in becoming a member of Bishop’s Friends is encouraged to contact reception@vancouver.anglican.ca or call the administration desk 604.684.6306 ext 210 and you will be put in touch with a Bishop’s Friends representative who can supply you with all the information. As I sat down to prepare my speech for today, I wondered what the Bishop's Friends would want to hear from a member of the delegation to the Episcopal Diocese of the Northern Philippines, a trip which your financial contributions so generously funded. Thank you.

I wondered, perhaps, if you might want a 200-slide powerpoint, with photos mostly of the delegation's nostrils, attempting to take selfies that included both the people and the scenery? (The Reverend Philippa Pride has prepared a beautiful slideshow that she’ll show you in a few moments here).

Perhaps the Bishop's Friends want to hear a 90-minute lecture on transubstantiation or some other obscure doctrine? You know how clergy love a captive audience!

A story. A story is what I’ve decided to tell you this afternoon. A story about how yours truly, on her first day as a guest of the Episcopal Diocese of the Northern Philippines, promptly and irreparably broke the toilet.

I awoke on that fateful day to the sound of rush-hour traffic. Bontoc is the capital city in the Northern Philippines. I had slept well after a 12-hr journey through the winding, bumpy, roads, some of which were under construction following a recent earthquake.

As I was getting ready for the day, I prepared a bucket of water to flush the toilet, manually. I had done my research, you see. I was well aware of the adjustments we’d have to make while in the Philippines. Having taken extensive notes, I made several attempts in my hotel room that morning to deal with the plumbing—bucket style. When I was unsuccessful, I rolled up my sleeves and thought to myself, “I know how to fix this.”

I took hold of the porcelain reservoir lid and removed it. I felt the thin layer of condensation that had settled on its surface. It glistened in the morning light. In a matter of seconds, the lid twirled into the air; set free from my grip. It landed on the floor—smashed into a thousand pieces. I followed suit shortly thereafter.

So, I did what any self-respecting person would do in a situation like this. I tried to pick up the pieces, one by one, and hide them in a bag that I would later dispose of when no one was looking. Finally, I admitted defeat and made my way to the lobby to plead my case with the manager.

As I left my room, though, there was the Executive Archdeacon, on the balcony, doing his morning study.

“Everything alright with the room?”

The story came tumbling forth, my words as hurried and fragmented as my attempts to clean up the porcelain pieces from the bathroom floor.

“Well, you’d better go down and have a word with the manager, haven’t you?”

(Yes, I’d better go down and have a word with the manager, haven’t I?)

(In actual fact, the Archdeacon was quite sympathetic and we laughed a great deal at my expense!).

I made my way to the main floor. I greeted the manager.

I pulled up a photo of the damage on my phone. She nodded and gestured to one of her sons. I insisted on paying for the damage. I asked if I could take a mop and clean it up myself. She smiled and pointed to a stack of porcelain lids in the back room.

“We have extras," she said, "because of foreigners, like you.”

I thanked the manager, and turned to make my way upstairs.

“One more thing,” she said.

The lesson I learned that day would become a bit of a theme on our journey. I had, as anyone would, preconceived notions about what life would be like in our companion diocese. It’s true; many of the toilets did require a bucket. But, as I came to appreciate, the people in our sibling churches are incredibly clever when it comes to dealing with foreign visits to their land.

Take, for example, the origins of the Anglican or “Episcopal” Church in the Northern Philippines. It was American missionaries who brought Anglicanism to the mountain province in the early 1900s. Many churches were built; many villages evangelised. Then, during WWII, the missionaries fled.

In the years following, the Northern Filipinos began to exercise what is known in postcolonial theory as “mimicry and mockery” (a theory I was first introduced to at the Indigenous Studies program at the Vancouver School of Theology). It’s:

When colonial discourse encourages the colonized to ‘mimic’ the colonizer, by adopting the colonizer’s cultural habits, assumptions, institutions and values. . . . [T]he result is never a simple reproduction of those traits. Rather, the result is a ‘blurred copy’ of the colonizer that can be quite threatening [to the colonising institution]. This is because mimicry is never very far from mockery, since it can appear to parody whatever it mimics. Mimicry therefore locates a crack in the certainty of colonial dominance.*

If I had to sum up my visit to the Episcopal Diocese of the Northern Philippines, I would say that “the crack in the certainty of colonial dominance” has been firmly located. The Church in the Northern Philippines practises the Christian faith in unique and vibrant ways. Locally made textiles adorn the altars as opposed to exclusively British or North American imports. The Bible is being translated into not one but two dialects so that it can be read and interpreted by local communities for local communities. Christainity has been refashioned into a tool to preserve rather than eradicate Indigenous language and culture, thereby making a kind of parody of what was maybe the original intent of the American missionary project.

Further, in contrast to the charity model that has historically characterised international relationships between churches, it was very clear throughout our trip that we were there as guests. We were friends and companions, there to learn from each other, to give gifts, sure, but mostly to receive them. We didn’t go to build churches or to make Christians in our own image; but to witness churches being built by Filipinos for Filipinos—in God’s image.

*This story was told to the Parish of St Clement, North Vancouver on October 16, 2022;  here's the link to that sermon.