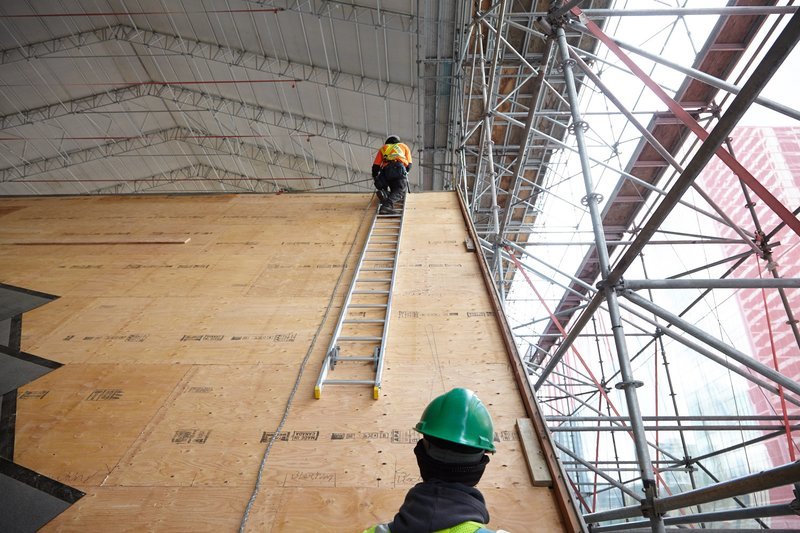 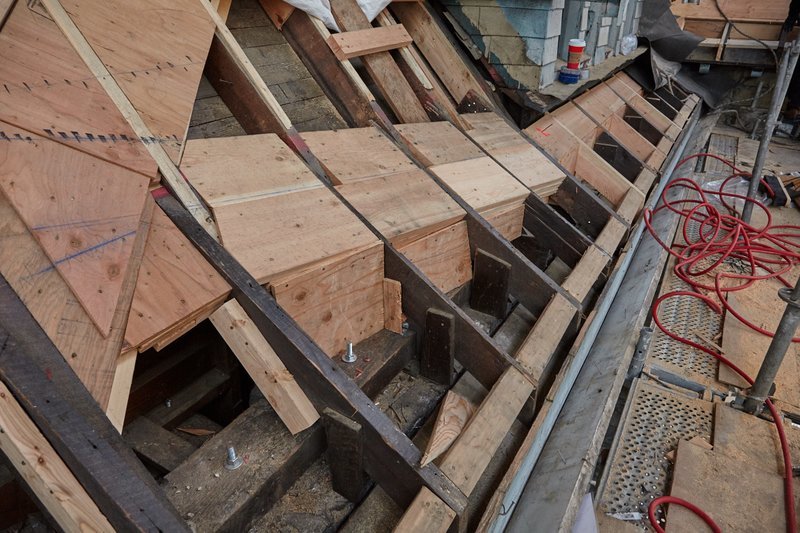 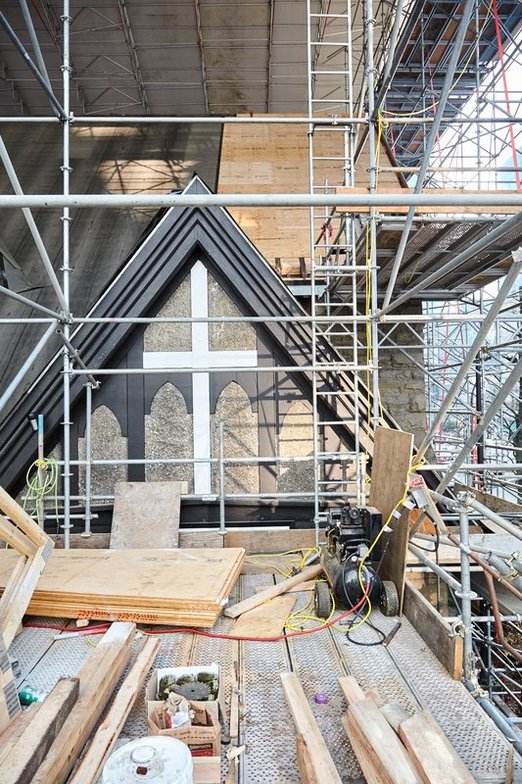 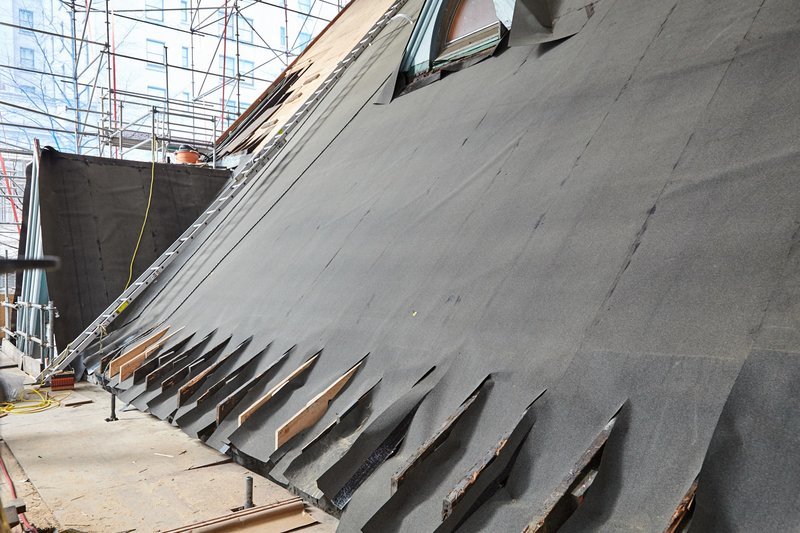 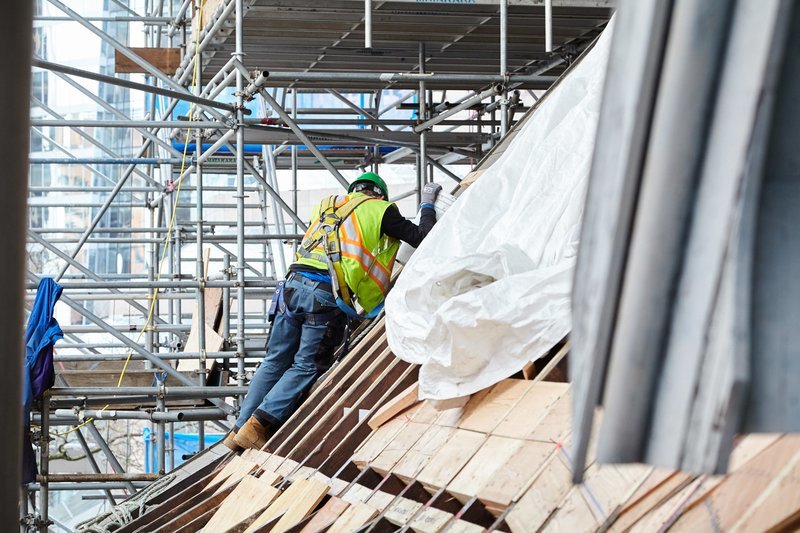 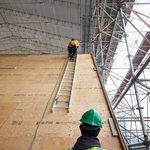 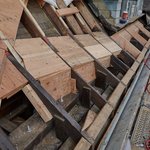 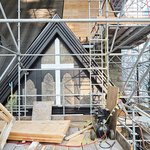 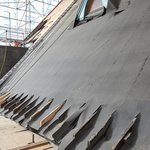 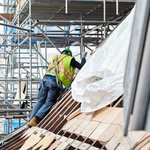 Nearly twelve months since the vast tarpaulin drapery descended over Christ Church Cathedral, grateful parishioners have finally got a possible date for the lifting of the big veil. Builders now estimate that the scaffolding and its voluminous cover should begin to come down in late July.

Initially scheduled for completion by December 2015, the roof project proved much more complex and time-consuming than expected. Complications arose from the discovery last fall of lead dust in areas of the roof, and then throughout the building. The dust probably resulted from decades of cars driving by the Cathedral, burning leaded gasoline. Safely cleaning and containing the dust set the project back several months and an additional $1.5 million dollars. We are pleased to say the Cathedral is now safely lead-dust free, and looking forward to a clean, green future.

The old roof also proved to be inadequately attached to the building. Following the construction techniques of yesteryear, the old roof structure was essentially resting on the walls by gravity, with few solid connections to the walls. Builders added extra cross bracing of all the joists and installed proper tie-ins of the joists at the ridge and onto the walls, and improved (and in several instances, added) connections to the interior hammer beams and trusses framework. The chancel barrel vault ceiling was also more securely attached to the main structural frame (and not just nominally nailed to the roof structure where it met, as it was previously). Cathedral project manager and Cathedral Associate Warden, Ian Birtwell reports that the prolonged process of bringing the existing roof’s connections and supports up to today’s standards required 27 separate structural up-grade memos and change orders.

The Raise the Roof project also committed the parish to complete the seismic upgrades to the Cathedral, which were postponed during earlier renovations because they would have required removal of the magnificent and heritage valued interior ceiling. A seismic steel framework was fabricated off-site, delivered in sections, and installed with substantial bolting connections to the building’s wood frame structure and to the drilled steel anchors and reinforced stone walls, and with some complex welding under very safe weld/fire watch conditions.

TEK Roofing has started installing the 2x8 sleepers, 6” of insulation, and plywood to create precise level planes (tolerance of 1/8” over 10 feet) in preparation for the zinc roof. Installation of the roofing membranes and air mats and then the zinc panels, prefabricated off site, will complete the roofing.

For over a year, project photographer and parishioner Martin Knowles has documented the views from the scaffold in twice-monthly photo sessions. Knowles has followed the roofers to the peak of the roof and the ends of the gables, capturing breathtaking shots. A sample of the photographs can be viewed on the Raise the Roof project’s Photo Gallery.

The scaffolding has also been a unique playground for urban wildlife. At Christmas a skunk was discovered wandering around the scaffold. More routinely raccoons prowl under the tenting. In the early mornings, an owl sometimes perches in the trees at the Park Place end of the scaffold.

Overall, the project schedule is now driven solely by the zinc roofing contract time frame. It is anticipated that the scaffold should start to come down in late July, possibly early August, starting with the tenting and upper portions. The first areas of the roofing work should be finished by late July, early August, the bell tower installed in late August, and the bells and glass artwork installed in late August or mid to late September. There are tentative plans for a dedication ceremony and events in October 2016.

Fundraising has reached $7,060,000 raised toward the target of $9,000,000. The Cathedral is grateful for the donations from the Jack and Darlene Poole Foundation, the Province of British Columbia, and over 500 donors who have contributed thus far to the campaign. While parishioners are encouraged by the generosity of the many who have given, they know there is still a mountain to climb.

If you have already given to Raise the Roof, Ring the Bells, Feed the Hungry, thank you. If you have considered participating in ensuring the future of our downtown Cathedral, please do so now. If this is the first you have heard of the campaign, there is still time to make your gift. Please contact Emily Pritchard at 604 682 3848 ext 21 for more information.