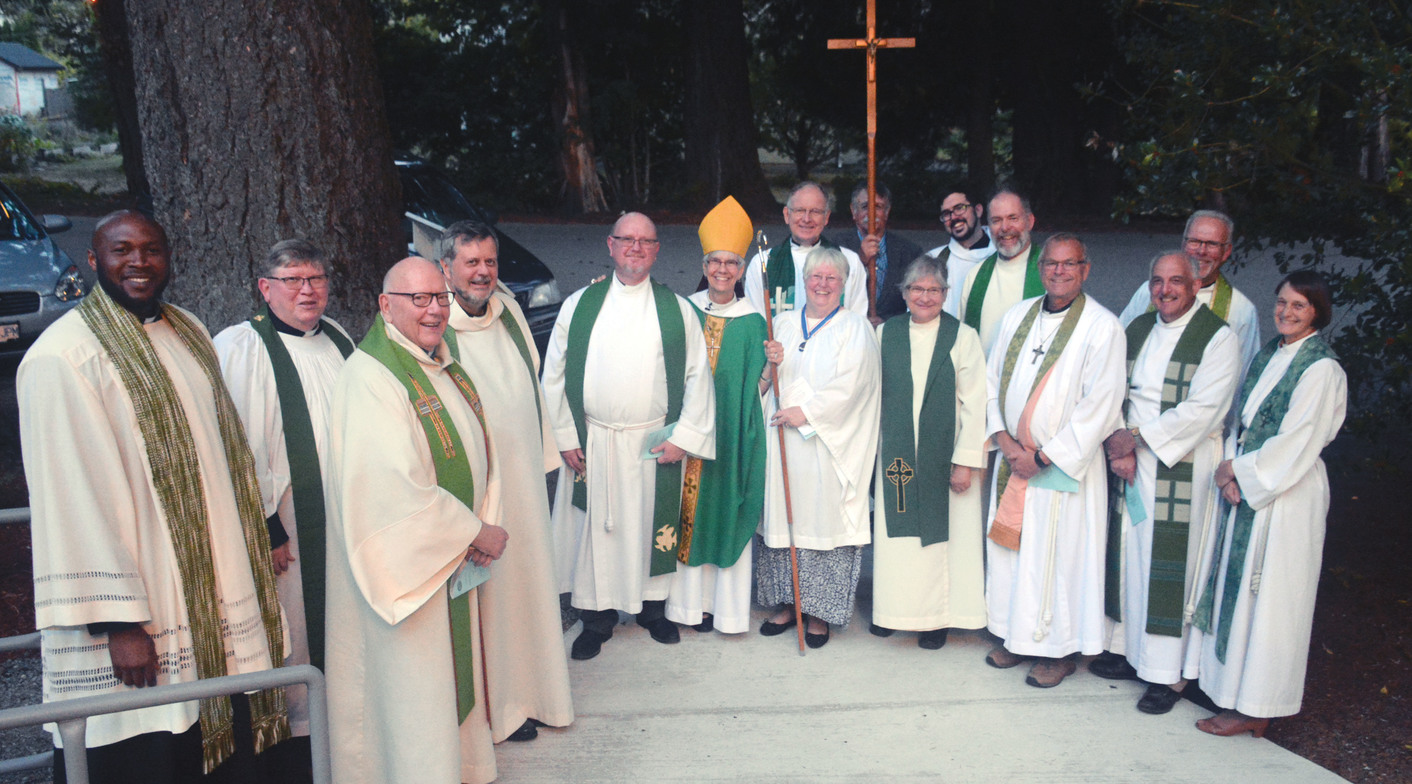 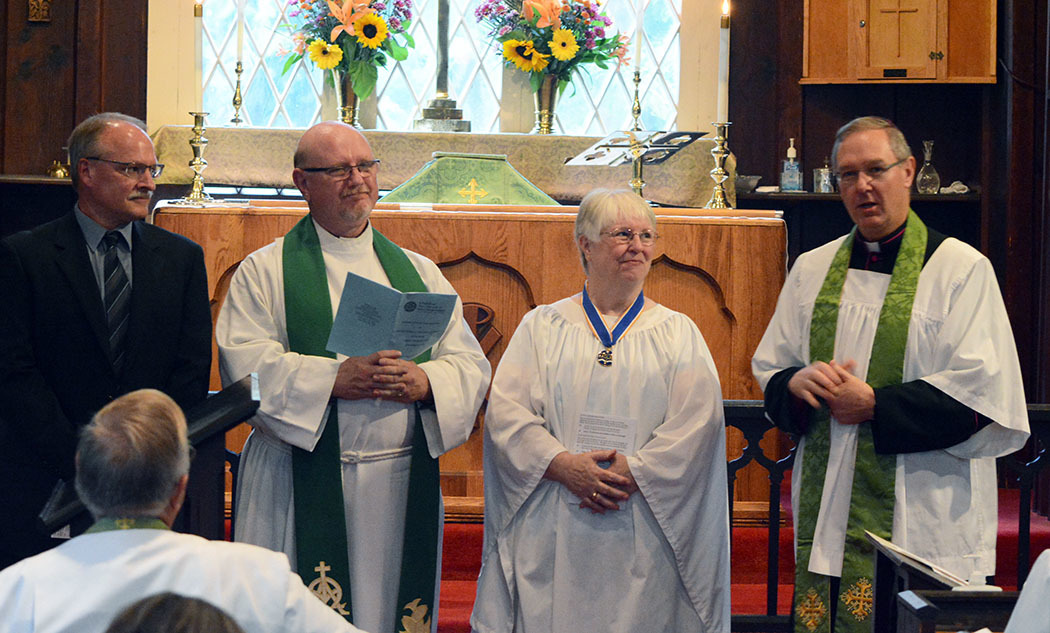 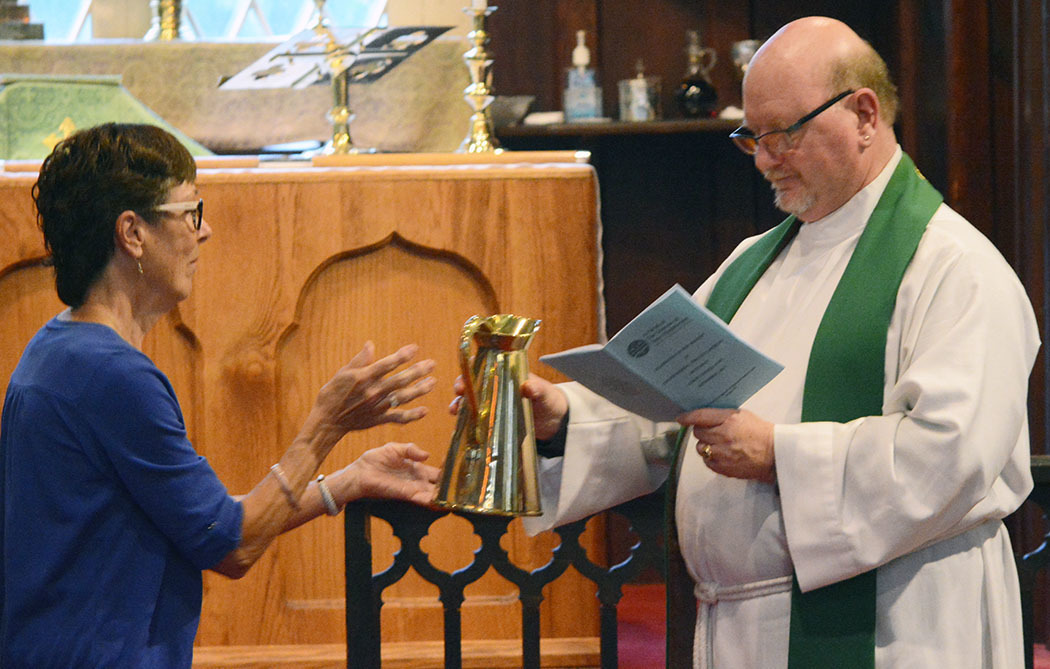 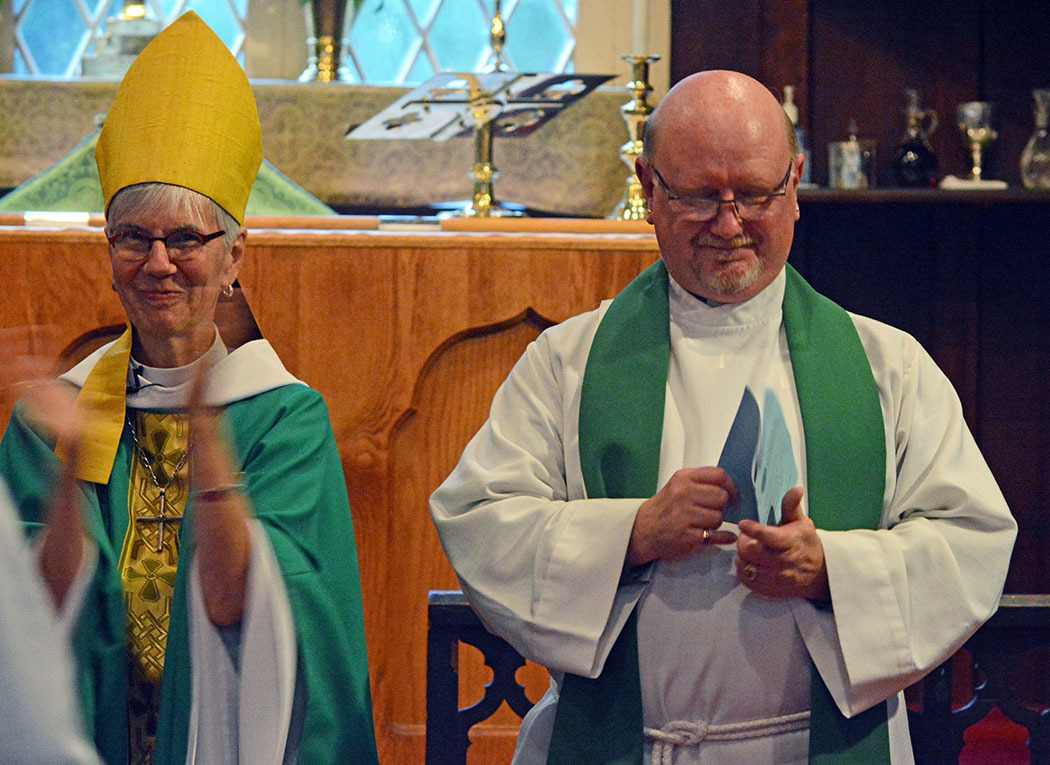 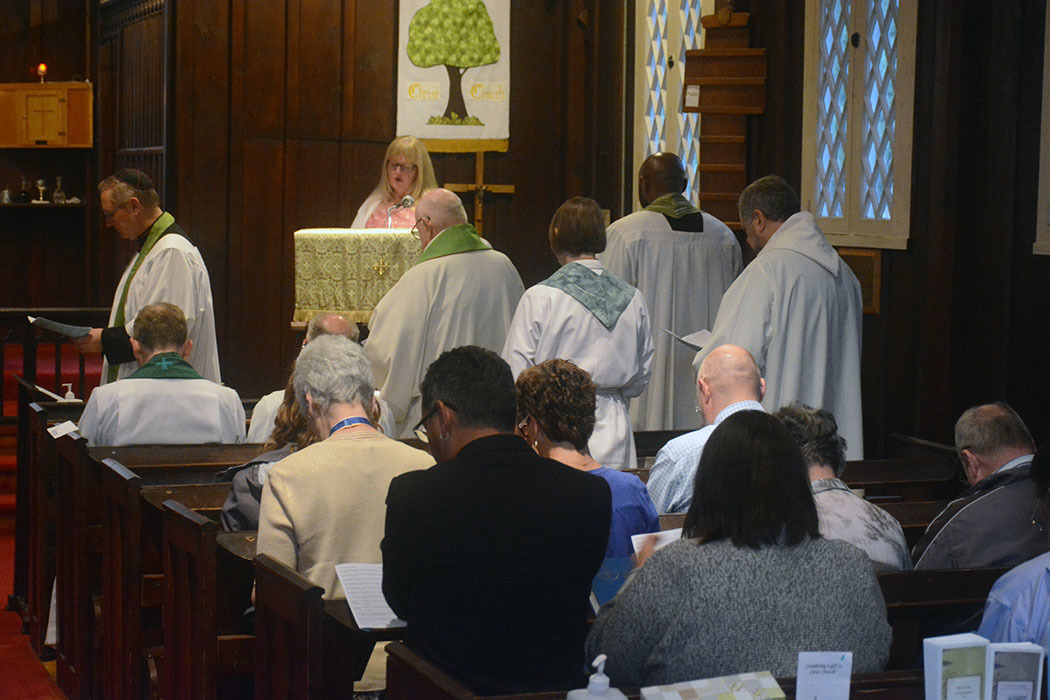 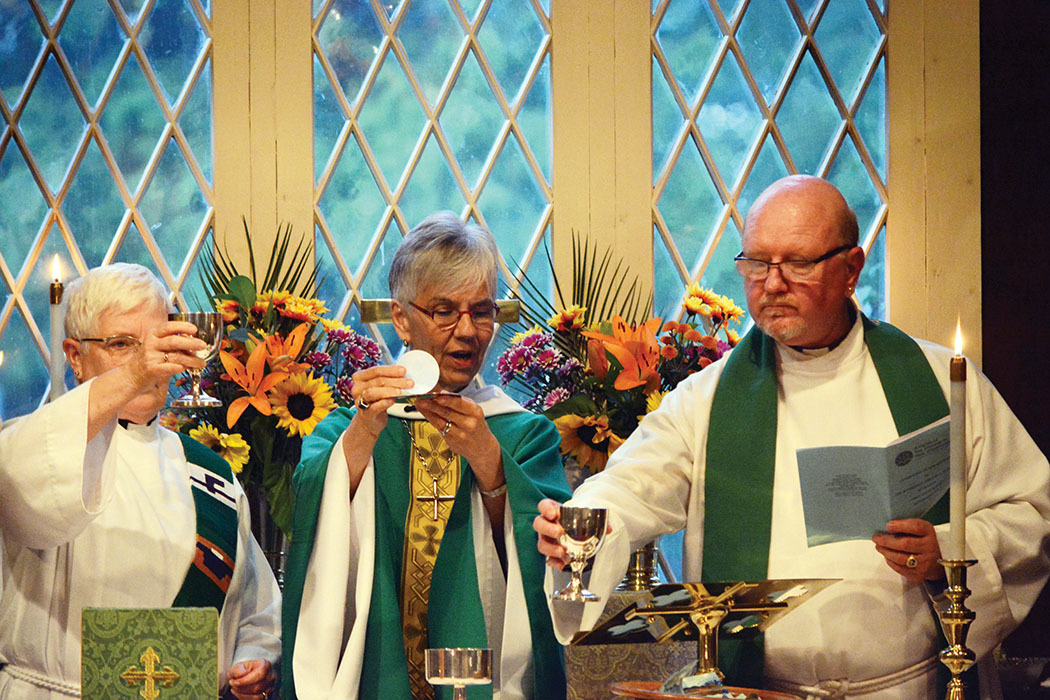 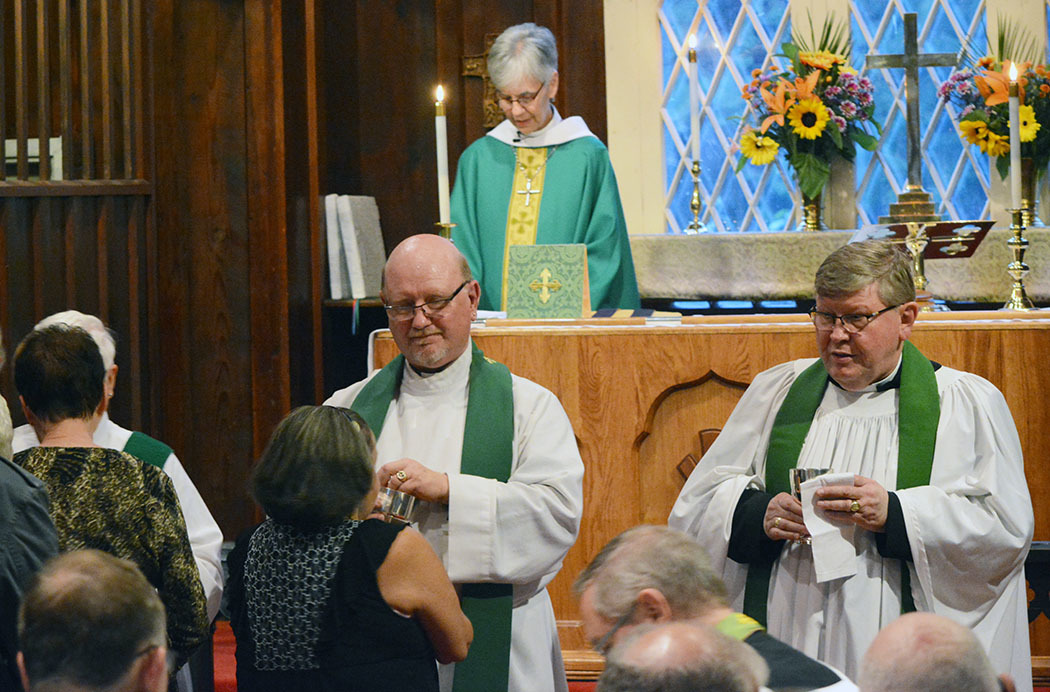 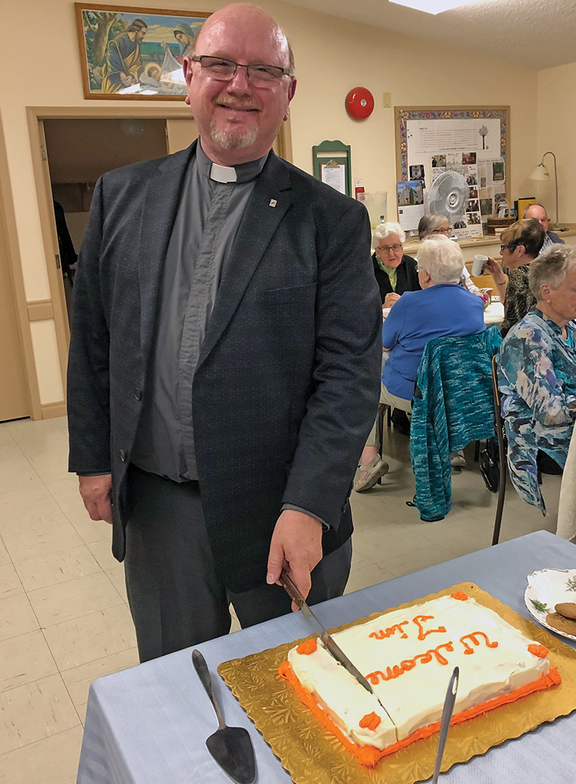 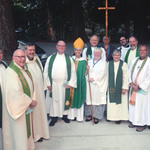 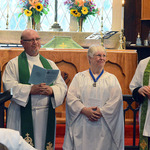 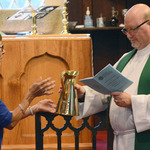 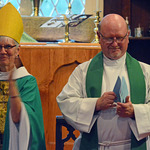 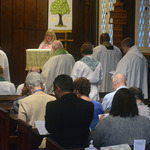 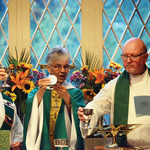 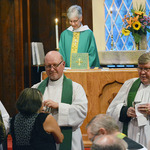 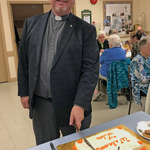 On Monday, September 9, 2019 there was a Celebration of a New Ministry Eucharist at Christ Church, Hope. Archbishop Melissa Skelton installed the Reverend Tim Morgan as vicar and priest-in-charge of one of the Diocese of New Westminster’s oldest parishes boasting the second most senior church building (Christ Church, Hope, now a National Historic Site was consecrated in 1861). Bishop Hills, the first Bishop of British Columbia (before the creation of the Diocese of New Westminster) laid the first cornerstone and Christ Church has offered continual services for the past 158 years.

Rev. Morgan arrived in the Diocese of New Westminster a couple of years ago from the Diocese of Niagara and was soon involved in ministry at Holy Trinity, Cathedral. Once he had received Permission to Officiate (PTO) from Archbishop Skelton in June of 2018 he became very busy with Sunday Supply opportunities and serving in interim ministry at a number of parishes including: St. John the Apostle, Port Moody (a full time ministry position) and Church of the Holy Spirit, Whonnock. Rev. Morgan had served regularly as Sunday Supply priest at Christ Church, Hope during his time in the diocese and prior to his August 1 appointment as vicar. The Venerable Douglas Fenton, Executive Archdeacon of the diocese said at the beginning of the Covenant in Ministry on September 9, that it has been kind of like Tim and the Parish of Christ Church have been “dating” and as the relationship is a good one it is time to make a commitment. According to Reverend Morgan:

"I had an affinity for Christ Church, Hope when I was filling in as Sunday Supply.  I truly appreciated not only the church and the people, but the mountains and the town itself.  But I knew I would be interested in being their incumbent priest at Christmastime of 2018. The service and the fellowship that followed was exceptional. From that time on I truly felt that it would be a great 'next place' for me to serve."

Considering that this Eucharist was celebrated on a Monday night right at the beginning of the busy church programming season the turnout of clergy was excellent with 14 of Rev. Morgan’s clergy colleagues vested and in attendance which included those participating in the liturgy, and the Regional Dean of Yale, the Reverend Paul Bowie and the Regional Archdeacon of Lougheed, the Venerable Alan Carson. Archdeacon Carson, rector at the nearby Parish of St. John’s, Sardis had been priest-in-charge of Christ Church, Hope up until Rev. Morgan’s August 1 appointment.

The preacher for the Eucharist was the Venerable Dr. Richard Leggett, Vicar of Holy Trinity Cathedral, New Westminster (HTC) and Regional Archdeacon of Westminster. He chose to focus on the Epistle, 2 Corinthians 4: 1-6 for his sermon text. As vicar at HTC, Archdeacon Leggett knows Rev. Morgan quite well and having him preach at the installation was most appropriate.

(Video, audio and the text of Archdeacon Leggett's sermon is available on this website by following this link.)

The Parish of Christ Church, Hope was as always, friendly, welcoming and on this night very enthusiastic about their future in shared ministry with Rev. Morgan. The liturgy was excellent thanks in large part to the lay participation of: wardens Ken Storozuk and Bev Kreller, ODNW (who also served as Bishop’s Chaplain); musician, Debra Gray; reader and intercessor, Linda Bailey; psalmist, Lynn Barker; reader, Joan Cope, ODNW; greeter, Bruce Kreller; crucifer, Cecil Kirksey; offering invitations to present symbols of ministry was Peter Bailey; Johanna Couglin, Jim Bowra, Lorna Nichol, Wendy Pearson and Mary Kirksey were among the parishioners welcoming the new vicar with presentations of the symbols of ministry: Bible, prayer and hymn books, water, oil for healing, Canons of the diocese, keys to the buildings, and bread and wine, the elements of Holy Communion.

Following worship there was a reception in the parish hall with savoury and sweet treats including a homemade sheet cake that the new vicar ceremoniously cut and served.

Rev. Morgan does have a plan, he said:

"At Christ Church, I am most excited about working with the parishioners on parish growth and revitalization, and community outreach. Along with the congregation, I have already begun to reach out to groups, organizations and businesses in Hope, with the goal of finding new ways for Christ Church to have a greater presence and participation in the wider community... I feel very blessed to be vicar of this parish."

Please keep the Parish of Christ Church, Hope in your prayers as they continue the remarkable legacy of ministry in the picturesque, historic town of Hope, BC.

Some Info About the New Vicar (in his own words)

I was born and raised in Etobicoke, Ontario, on the outskirts of Toronto. We lived there until I was 17, when we moved to Niagara Falls to be closer to my mom's family (she grew up in Niagara). I graduated from high school in 1979, and then went on to McMaster University, graduating with an Honours BA in Political Science in 1982.  I then studied at Brock University, where I received an MA in Politics in 1984. For a short time thereafter, I worked in Ottawa for the Federal Government.  I then moved back to Toronto and worked at the Provincial Legislature as an aide to a Cabinet Minister and then an MPP (same as an MLA here).  In the midst of my working career, I realized that my heart was really in the church, and felt a deep calling to put all else behind and study for the ordained ministry. It was six years until I said "yes", but in 1989 went to Huron College at the University of Western Ontario and received my M.Div. in 1992.  I was ordained in the Diocese of Niagara and served there for 16 years before going back to school to study Psychology.  I received a Master of Arts in Counselling Psychology from Yorkville University in 2011 and for the next six years worked at the Canadian Mental Health Association as a Crisis Worker and simultaneously at AIDS Niagara as a Case Manager.  I moved to BC in 2017, and for a year worked at the John Howard Society as a Residential Worker.  I resigned that post in order to take on the Interim at St. John's, Port Moody.

My liturgical style is varied. I still have a great heart for the traditions of the BCP, as that is all I knew and loved for the first 25 years of my life. But at the same time, I made the transition to the BAS well and am excited about, not only the services from there, but about new liturgies and alternative forms of worship.  Musically, I enjoy old and new hymns, but also have a real appreciation for upbeat, "clap your hands" praise music.

I don't really have a favourite Old Testament passage. There are some of the Psalms that are dear - Psalm 100 (Jubilate Deo) is one of them, because it brings back a lot of memories. We would cant it during Morning Prayer, from the BCP, when I was a child and teen, and I loved singing it. As for the New Testament, my favourite is definitely John 21:12-17, as it truly defines my call to ministry -- "Feed my lambs"; "tend my sheep"; "feed my sheep". I had a very inspirational experience with this passage in 1991 while at seminary and it is truly the mantra of my priesthood.

Many more photos with captions available in a photo album at Anglican Conversation, the Facebook page of the Diocese of New Westminster.