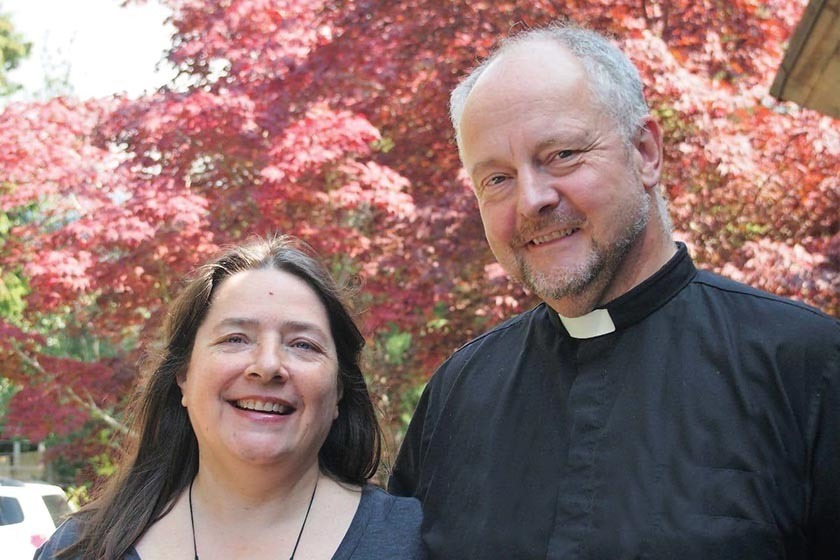 In order to recover from a dispirited Christmas with no in-person church services, St. Stephen’s West Vancouver's congregation welcomed the new year to many possible interests.  Under the creative guidance of Canon Jonathan LLoyd many of the parishioners discovered that their lives had been regrettably short of the Zoom experience, and prepared to follow their rector into that unknown space. With all the COVID-19 restrictions, here was something they could enjoy in their pyjamas! They could add the frustrations of learning a new computer skill to all the other frustrations of coping with the pandemic. People without tablets were able to borrow them from our local library.

The first challenge was the introduction of a book by Fr. Richard Rohr OFM (an author already familiar to the group) called “Breathing Under Water”. Given how most people were feeling, this seemed a most appropriate title. Until the copies arrived, the Reverend Karen Urquhart, Rector of St. Christopher’s West Van, read from the book online, and then on Zoom the participants were able to discuss the reading.

Following the pre-pandemic scheduling, the weekly Tuesday morning coffee hour with Jonathan was moved to Zoom and has continued each week with lively conversation and fresh coffee and muffins.

A book study group was initiated to further involve the congregation. The West Vancouver Library has been very helpful in allowing us to obtain the chosen books. The discussion of each book is facilitated by various members of St. Stephen’s, and is open to anyone. In March we discussed 'A Gentleman in Moscow' by Amor Towles, and our book for April is 'The Dance Hall Years' by Joan Haggerty (based on Bowen Island).

The Minister of Music at St. Stephen’s, Dr. Annabelle Paetsch, initiates and leads a virtual choir practice on Thursday afternoons. She leads the music in worship playing prelude and postlude organ or piano solos for the online church service, pre-taped for home worship on Sundays. Occasionally the church is treated to another soloist as well from the roster of many local musicians.

On Fridays Canon Donald Lawton leads a Zoom Bible Study, in partnership with St John the Divine, Squamish. This Fall’s studies were on Revelations followed by Jonah during Lent.

Vestry was held on February 28 and involved over 40 people in which there was a 100% vote in favour of moving forward with a major redevelopment project that will include rental housing for the local community.

During Lent there has been Morning Prayer at 8am each morning online organized by the clergy of Sea to Sky deanery. We were delighted on Sunday March 7 to have our Primate, Archbishop Linda Nicholls as our preacher at combined worship with St Christopher's, West Van. The Primate also led an informative discussion about the future life of the Anglican Church during a live Zoom coffee hour, and answered questions.

Adding to the mutedness of Lent, and the dispiritedness of the COVID situation, St. Stephen’s congregation is also facing the imminent retirement of its rector, Canon Jonathan LLoyd, at the end of April. He will be returning to his home in Somerset, England, to join his wife, Sue, who has already departed to be present after the birth of her and Jonathan’s first grandson. His parishioners rejoice with the LLoyds on the birth of Henry, but are sad in their loss of their exceptional rector.

Jonathan has been away from his home country for ten years, having served as Archdeacon of Germany and Northern Europe for five years, based in Copenhagen, Denmark.  He will continue to serve in the voluntary role of Assistant Formation Guardian of the Third Order of St Francis (TSSF Province of The Americas).