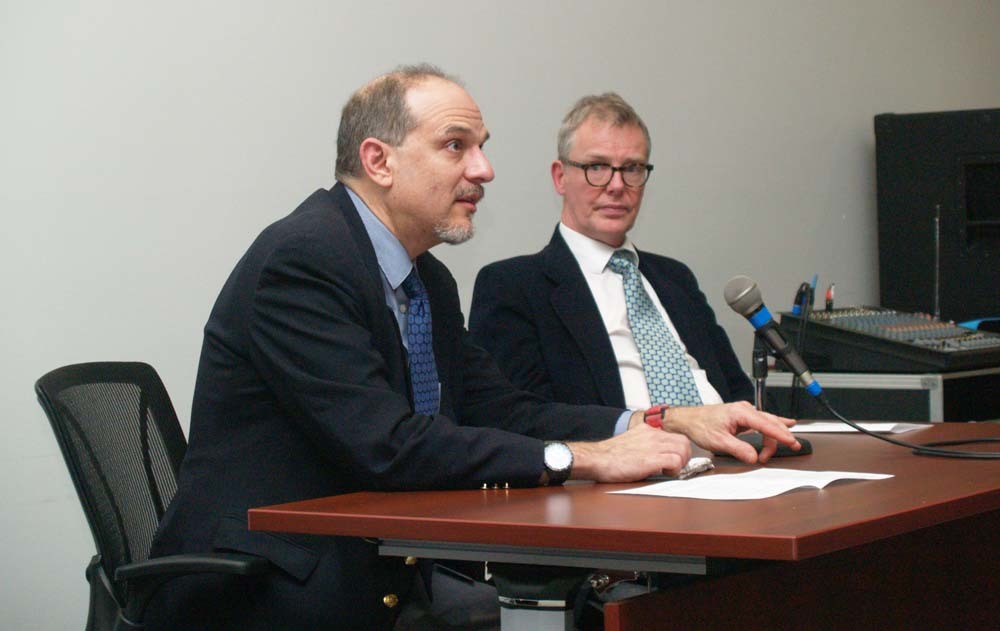 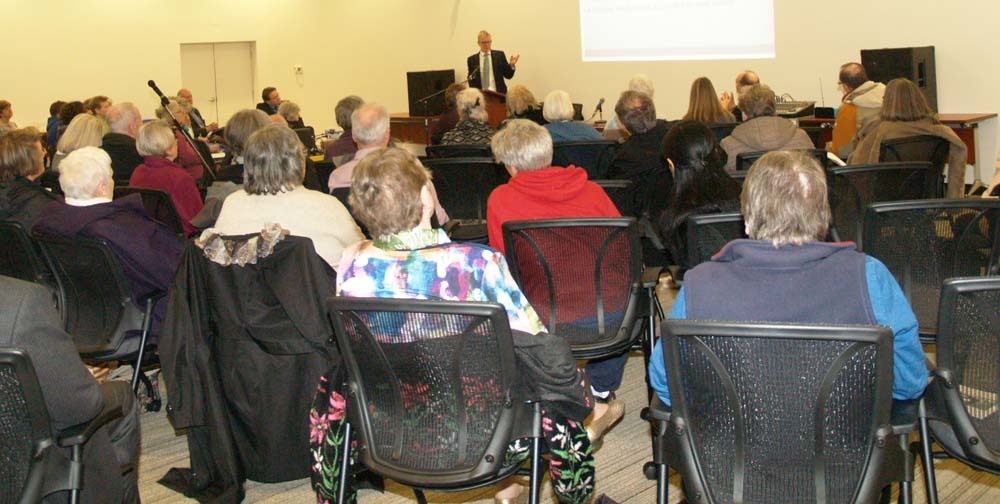 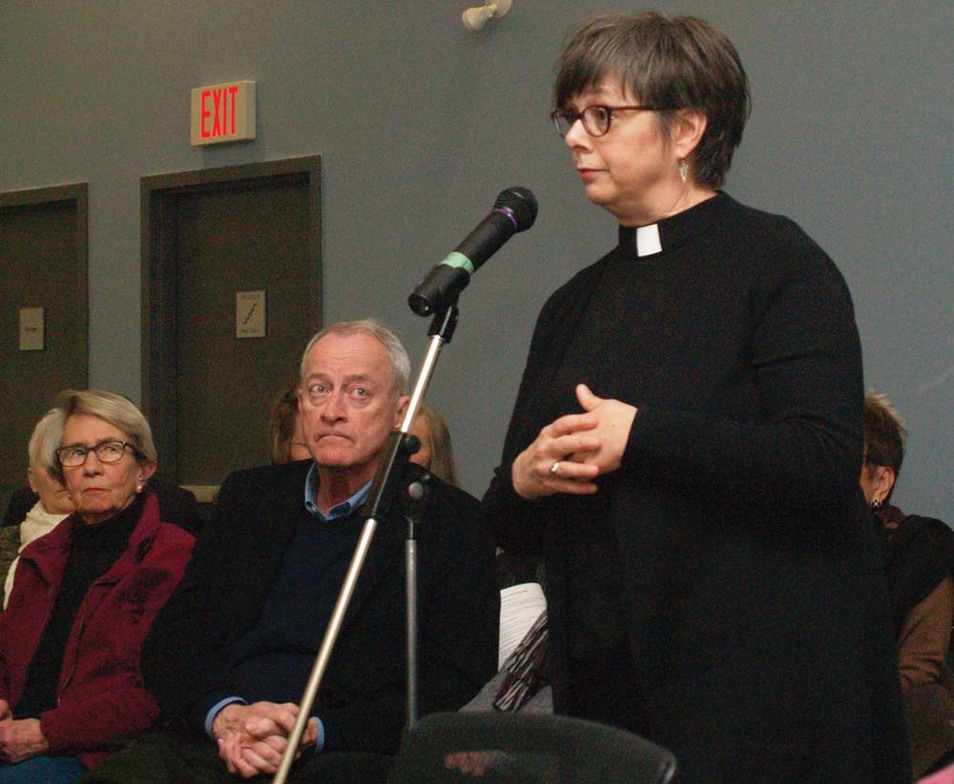 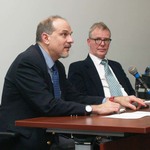 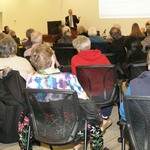 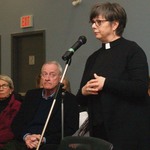 Two medical doctors shared with about 80 people gathered at the Synod Office conference room adjacent to St. John’s, Shaughnessy (SJS) February 27 their experiences of how they help people die in British Columbia and Oregon.

The forum on Medical Assistance in Dying was sponsored by SJS, along with St. Philip’s Dunbar and Christ Church Cathedral.

A “Death with Dignity” program has been operating in Oregon for 19 years following a 1994 referendum. Court injunctions delayed implementation till 1997, at which point Oregon became the first state to let patients determine the time of their own death.

In British Columbia, the “Medical Assistance in Dying” program followed a 2015 decision of the Supreme Court of Canada, and has been in effect for the past eight months after federal legislation (Bill C-14) received Royal Assent on June 17 last year.

Dr. Charles Blanke, a professor of medicine at the Knight Cancer Institute in Portland, talked about the similarities and differences between the Oregon and the British Columbia programs.

One important difference is that in Oregon a patient must self-administer the medicine to end his or her life. Most of the time the doctor is not present when the patient swallows the fatal pills dissolved in water.

In British Columbia, the life-ending drug is usually administered intravenously by a doctor, who is present.

Dr. Michael McKenzie, a physician specializing in radiation treatment at the BC Cancer Agency in Vancouver and a clinical professor at the University of BC, spoke about the much newer British Columbia program. He is a member of the St. Philip’s congregation.

Although the populations of Oregon (4 million) and British Columbia (4.5 million) are roughly comparable, the rate of medically assisted dying has been much greater in BC.

“There might have been some pent up demand as soon as the law was changed and people can do it,” suggested Dr. Blanke, “but I think it is more than that. I think there are other reasons why it’s more “successful,” if you will allow that word, in Canada.

During 2016, a total of 204 Oregonians received prescriptions of lethal drugs, but only 133 ingested them to hasten death. In British Columbia, 188 physician assisted deaths were reported to the BC Coroner’s service between June 17, 2016, and January 10, 2017.

It is clear a large percentage of Oregonian who get the lethal pills use them. “One out of three patients who have been written a prescription, never take the drug. One year, more patients than not didn’t take the prescription,” said Dr. Blanke

“A number of patients get that bottle of pills and they stuff it away in their underwear drawer and never look at it again. They are happy to have it because it gives them potential control over their own death,” said the Oregon oncologist.

In both jurisdictions, the law requires that the patient be an adult, mentally competent, that his or her disease be terminal – within six months in Oregon.

No specific time is legislated in BC, only that death is “reasonably foreseeable.” He or she should be suffering “intolerably.” In both places the patient has to be informed of other options and how they might receive pain management and palliative care to relieve them.

Only medical doctors assess patients in Oregon, Dr. Blanke noted. The law requires that the patient must make two oral requests to a physician, separated by at least 15 days. A second consulting physician must be involved. A written, signed request, witnessed by two people in also required.

Either of the two Oregon doctors can call in a psychologist to determine mental state, which however only happens about once in 20 times. Dr. Blanke said that Oregon psychologists tend to conclude that patients who have asked for assistance to die are competent to do so, even if depressed.

However, in British Columbia, participation by medical doctors is not always required—only that two health practitioners be involved. Nurse practitioners as well as physicians can assess the patient’s request. In BC, patients must make their request in writing in front of two independent witnesses (decidedly not family heirs), and wait at least ten days.

Why do people want to die earlier than they would otherwise? Dr. Blanke outlined the reasons people in Oregon expressed the desire. Most – 90 percent or more – fear loss of autonomy and say they no longer enjoy life. Almost as many say they don’t want to lose their dignity. About half say they have lost important bodily functions. Some 42 per cent don’t want to burden their families, about a quarter complain about poor pain relief, and three per cent cannot afford the cost of therapy in the US. The doctor said he is very concerned about the latter groups.

Dr. McKenzie said that in British Columbia patients give similar reasons. Often people have had an experience of a painful death of a relative. They say, “I can see what’s going to happen and I don’t like it.” The other reason given is, “I’ve suffered enough.”

One of the BC doctors obtains the lethal drug from a pharmacist. The cost is covered by the Medical Services Plan in Canada; in Oregon the patient must pay about $4,000 for it. The drug most commonly used in Oregon is secobarbital, in a dosage equivalent to about one hundred powerful sleeping pills.

During a question period moderated by Vancouver School of Theology Principal Richard Topping, the doctors were asked what constituted the required suffering, since what is unbearable is a subjective notion. Is the test of suffering objectively or subjectively determined?

“It is subjective, and it doesn’t have to be physical suffering at all…it can be any form of suffering you can imagine. Of course some people have some concern about that at times. It’s often the existential sort of suffering,” said Dr. McKenzie. “There is no questionnaire you can give patients to quantify that.” “It’s suffering that I think you can’t relieve,” added Dr. Blanke. “The bar is low. I think it really is what is in the mind of the patient… If the patient feels he or she is suffering, it’s not for us to say I don’t think you’re that sick or you’re not suffering that much.”

The Rev. Liz Hamel, Priest Assistant at SJS and Anglican Chaplain at Vancouver General Hospital (VGH) asked whether the Spiritual Care Department at VGH is involved, particularly in assisting patients who may not be overtly religious. Dr. McKenzie said that such care seems to have been overlooked in setting up the process, and would welcome its inclusion.

While ethical questions related to physician assisted dying were debated at earlier forums at St. Philip’s in September , 2015 and June of last year, Dr. Ashley Moyse, teacher of ethics at Vancouver School of Theology and Regent College, did raise the topic in the question period.

“There’s been a lot of focus on the legality of death with dignity. Can you comment on the ethics of Medical Assistance in Dying?”Moyse asked.

Dr. Blanke said people sometimes bring up the Hippocratic Oath because it specifically prohibited the administration of fatal poisons. He noted the ancient Greek oath also forbids abortions—which are legal and accepted by many in both the US and Canada.

“I truly believe if you think death with dignity is harm—and we are charged with doing no harm—then you can’t do it [assist dying]. On the other hand if you believe as I do that you are relieving interminable suffering, that’s the opposite of doing harm. I have to think it is ethical or I couldn’t do it. I don’t buy the harm argument. Loss of life is not inherently harm in my book, although there are many who feel the opposite,” said Dr. Blanke.

Added Dr. McKenzie: “I’m not an advocate—I’m not a member of Death with Dignity. There are elements of this I’m still working on for myself. My sense is we’re past discussing the ethics of it. It is the law and I think we need to respond to that. I need to be with my patient in whatever capacity I need to be toward the end of life.”

“Where I struggle with it is making sure the patient has access to all the other care they need. Sometimes that’s hard…We know that 30 percent of Canadians don’t have access to palliative care, for example. That’s not saying palliative care always solves problems but we would like to at least have access to it so they have a real choice to make.”

“I would say I am a bit surprised I’m doing it. I couldn’t have imagined that 18 months ago, but there it is.”

Dr. McKenzie added that the process has resulted in some “rich conversations with people about the options they have—and not all choose assisted dying.

The Rev. John Stephens, rector of SJS, ended the meeting with the poem “For the Dying” by Irish poet John O’Donohue, which read in part:

May death come gently towards you,

Leaving you time to make your way

Through the cold embrace of fear

To the place of inner tranquility.

May death arrive only after a long life

To find you at home among your own

With every comfort and care you require.

May your leave-taking be gracious,

Enabling you to hold dignity

Through awkwardness and illness.

Dr. Charles Blanke and Dr. Michael McKenzie A group of 80+ gathered in the main conference room at the Synod Office adjacent to St. John's, Shaughnessy The Reverend Liz Hamel