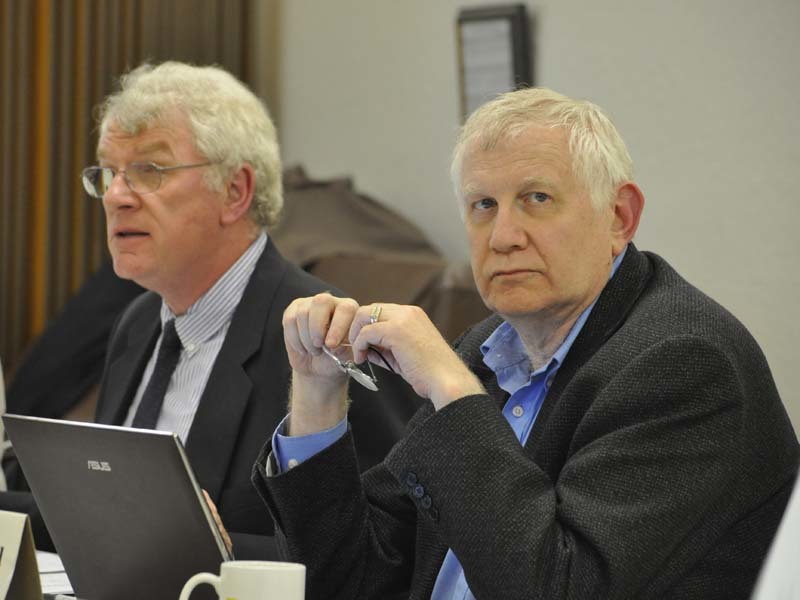 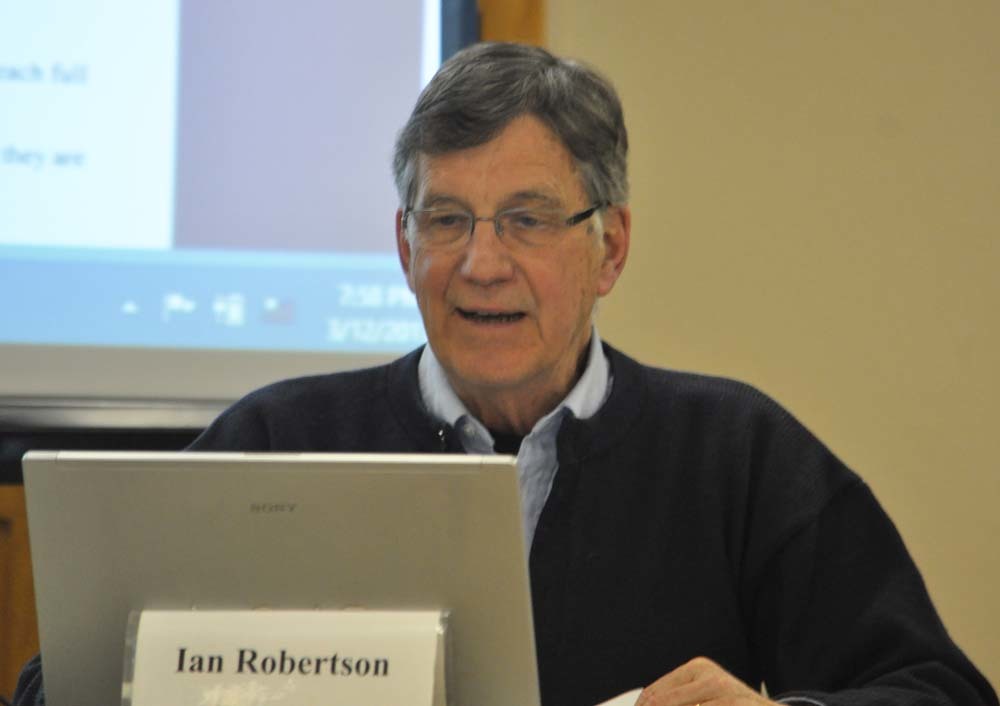 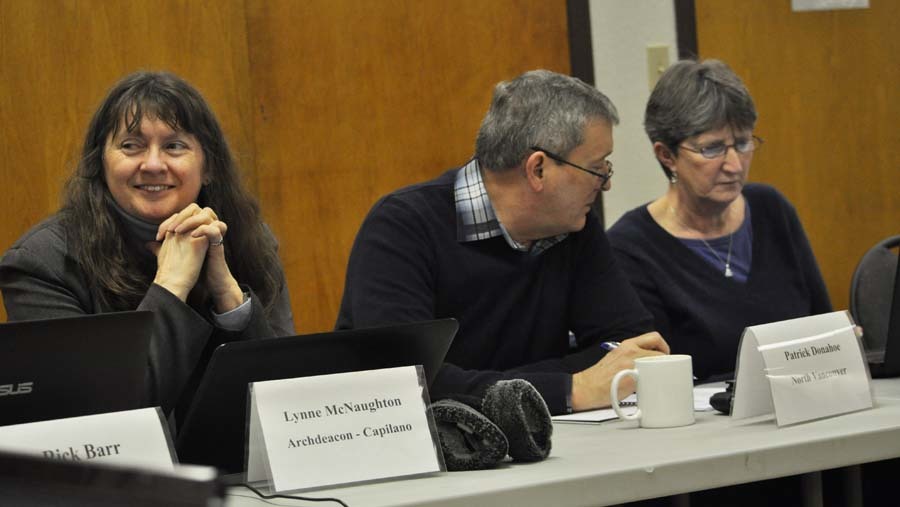 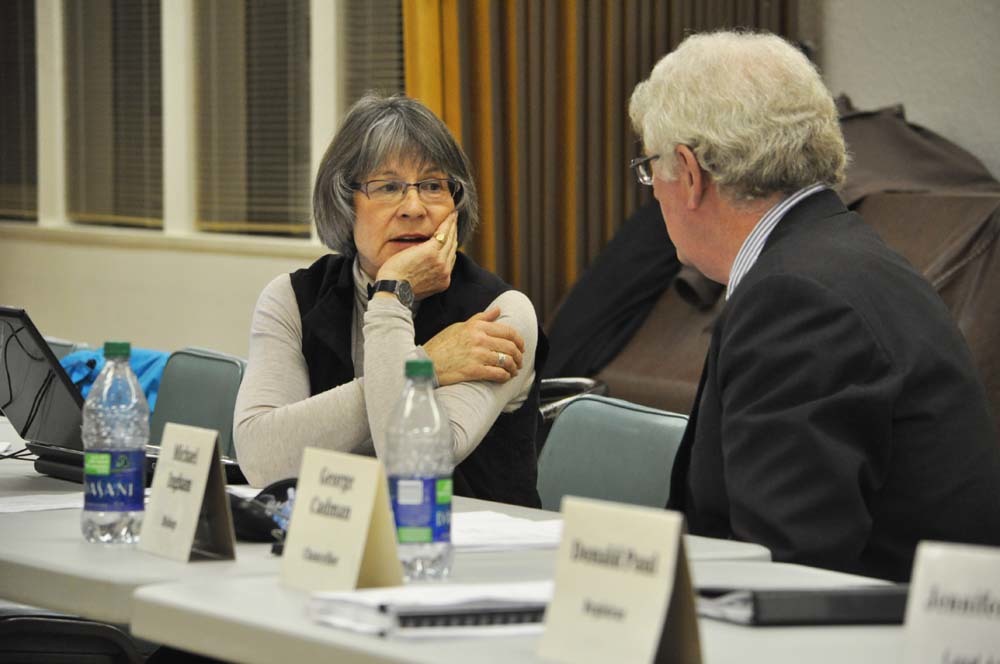 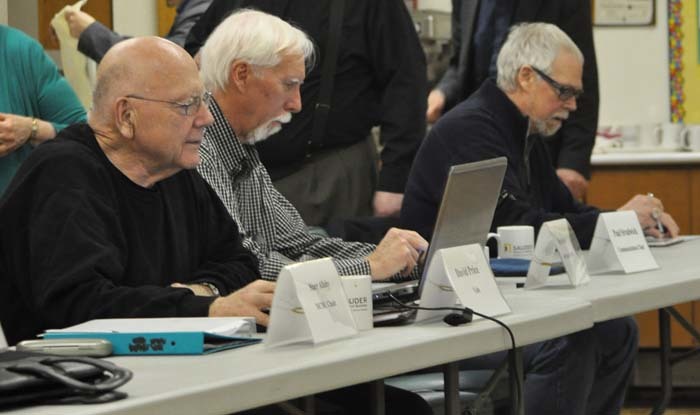 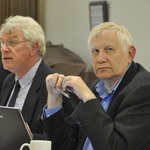 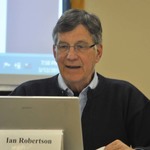 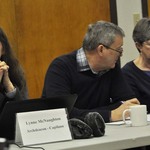 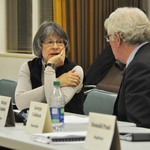 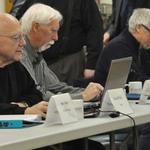 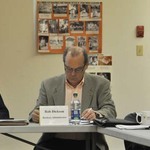 
Bishop Michael began the meeting with a few words about the election of the Pope and the fascination with the election from the mostly secular world in our post-religious culture. There is something about the ritual and pageantry of this ancient ceremony that connects with the world.
Bishop Michael asked that we pray for the conclave.
Bishop Michael then reminded Council that tonight is the one meeting of the ten meetings held during the year when we turn our primary attention to the budget. We look carefully at the financial statements for the year that has passed and then focus on the proposed revenues and spending for the year to come.

2. MINUTES: February 12th, 2013
There were two minor corrections to the minutes and after these were noted the council MOVED to accept the Minutes

By 7:45pm, the Treasurer Ian Robertson moved into the bulk of the evening’s work, the annual presentation of the finances of the diocese, beginning with the Audited Financial Statements for 2012. Ian began by thanking Business Administrator, Rob Dickson and Controller, Mark Beley for having this material prepared for audit in a timely fashion. Again, the audit this year is a “Clean Audit” which means in simple terms that the accountants have authorized and signed off on this audit without reservation.
Ian guided Council through the sections of the Audited Financial Statements and descriptions.
He highlighted the impact of changes in the rules of accounting. There have been some changes in the rules affecting not-for-profits. As many parishes in the diocese do not need to have audited financial statements done annually these new rules would not affect those parishes.
In the audited statements we also find the statements of the Mission to Seafarers and The Camp Artaban Society as they are related organizations.
Mission to Seafarers and Camp Artaban Society statements are a year behind due to the fact they have different fiscal year ends than the diocese.
In the Consolidated Trust Fund there is almost 20 million dollars invested by the diocese on behalf of the parishes and approximately 17 million dollars invested of diocesan funds. There was an 8% increase in the CTF in 2012 due to the health of the market.

After a presentation of just under half an hour Ian then asked the Bishop to open the floor for questions.
The Reverend Dr. Richard Leggett, Rector of St. Faith’s and Regional Dean of Granville/Point Grey asked that the financial team explain the funding expenditure that came out of the New Development Fund in 2012. Controller, Mark Beley informally went through the expenditures which included: the 2012 loans to Camp Artaban, the cost of the case study for the Anglican School, funding needed to revitalized the returning parishes, (the Parish of St. Matthew, Abbotsford, St. Matthias and St. Luke and St. John’s, Shaughnessy), and other ministry items.
Ian moved the following MOTION to Council to receive and approve the Audited Financial Statements and the Auditors report.


The MOTION to re-appoint Rolfe, Benson LLP Chartered Accountants for the Diocese for the year ending, December 31, 2013 was also carried

6.3 Budgets
a) 2013 Revised Budget
Ian took some time to explain the layout of the Budget document and the content of each column. The last two columns in the document are the columns looked at by Council. These are the 2013 Revised Budget and the 2014 Vision Budget.
Ian did point out that for the first time the amount of assessable revenue that the parishes forward to the diocese as assessment contributions is down. It is too early to tell if this is a new trend but if so it could be a very serious situation.
Of the 771,000 dollars going to Diocesan Ministries less than half comes from assessments.
The funds that come in from other sources to fund these ministries is more than what comes from the parishes in assessment income.
The same is true for the Ministry Development budget items.

Richard Leggett again raised a question about how the New Development Fund is being used to fund ministries, and that there may be a perception that the funding may not meet the conditions of the Canon, 3005. Richard stressed that if questions are asked about the ministries being funded by NDF, there needs to be an explanation.

Rob Dickson responded by saying that the items to be funded from the NDF in the 2013 Revised Budget were in the view of those assembling the budget a proper use of those funds, however, if there are questions raised then those budget funding items will be reviewed.

In the next section of the Budget Ian highlighted that the General Synod assessment is divided in three sections, and it comprises a total of 26% of diocesan assessment revenue that goes forward to support the work of the General Synod and its mission on our behalf both locally and throughout the world.
Chancellor George Cadman proposed a motion that takes into consideration Richard Leggett’s question about Canon 3005 and the NDF.

THAT Diocesan Council approves the 2013 Revised Budget as presented, subject to confirmation of allocation of funds from the New Development Fund in accordance with the purposes specified in Canon 3005, and forwards it to Synod for information and review.


b) 2014 Vision Budget
As with the 2013 Revised Budget, Ian drew Council’s attention to the final column, the 2014 Vision Budget. Ian went through the slight increases and decreases in the 2014 column from 2013. The overall difference is a slight decrease and a very small increase of receipts over expenses. Things will carry on in 2014 very much like this year.

THAT Diocesan Council receives and recommends to Synod the 2014 Vision Budget, subject to confirmation of allocation of funds from the New Development Fund in accordance with the purposes specified in Canon 3005.

The MOTION was carried


6.5 Small Grants Budget
Rob Dickson clarified the content of the Precis and the excerpt from the following minutes of the Grants and Loans Meeting of February 28, 2013:

In order to streamline the making of small grants from the New Development Fund without the necessity of having:

(b) Diocesan Council both approve each such grant, the Grants and Loan Committee as Administrators of the Fund, recommends that Diocesan Council pass the following budgetary and approval resolution:

THAT:
(1) Diocesan Council hereby budgets and approves for the 2013 calendar year a maximum of $100,000 to be disbursed as grants by the Grants and Loans Committee from the New Development Fund on the following terms:
a. No grant made under this resolution shall exceed $20,000;
b. No grant shall be made unless, in the opinion of the Grants and Loans Committee, it is appropriate to do;
c. Grants made under this this paragraph (1) of this resolution do not require further approval of Diocesan Council.

(2) Any proposed grant that does not meet the criteria set out in paragraph (1) of this resolution may be approved and recommended by the Grants and Loans Committee subject to the further final approval of Diocesan Council.

Richard Leggett wanted to add an amendment that Grants and Loans Committee awards these amounts as long as they are connected to one of the priorities as approved by Synod in Plan 2018.

Moved by the Registrar Don Paul and Seconded by the Treasurer, Ian Robertson the following amended motion was presented to Diocesan Council.

(1) THAT Diocesan Council hereby budgets and approves for the 2013 calendar year a maximum of $100,000 to be disbursed as grants by the Grants and Loans Committee from the New Development Fund on the following terms:
a. No grant made under this resolution shall exceed $20,000;
b. No grant shall be made unless, in the opinion of the Grants and Loans Committee, it responds to one of the priorities set out in the Plan 2018 program;
c. Grants made under this paragraph (1) of this resolution do not require further approval of Diocesan Council.

The Bishop adjourned the meeting at 9:25pm with “The Grace”
The next scheduled meeting of Diocesan Council is Tuesday, April 9th, 7:30pm at St. Augustine’s, Marpole.

Diocesan Council is the decision making, governing body of the Diocese of New Westminster consisting of: the Diocesan Officers (Bishop, Dean, Executive Archdeacon, Chancellor, Treasurer, Assistant Treasurer)
the Archdeacons of the five Archdeaconries
the Archdeacon who is the Director of Deacons, two additional Diocesan Legal Officers, (Registrar and Legal Assessor), a Lay Secretary, a Clergy Secretary, the chairs of the Diocesan Standing Committees
There are two Deanery reps either Ordained or Lay. Sometimes Deaneries have two lay reps and sometimes two clergy reps, sometimes one of each. A Deanery is a group of churches, geographically affiliated and the reps are elected at the Annual Synod Meeting.
Synod Staff also attend meetings but are not members of Diocesan Council. They include: Business Administrator, Stewardship and Planned Giving Officer, Comptroller, Youth Coordinator and Communications Officer (and other staff as required).
Diocesan Synod consists of all the active clergy in the Diocese of New Westminster and 2-6 lay people elected from each diocesan parish proportionate to the size of the parish community.
Diocesan Council functions as the Synod between Synods, it is a representation of the large group that meets annually.
Diocesan Council and Diocesan Synod are both chaired by the Bishop.
Diocesan Council meets monthly on the second Tuesday of the month usually at St. Augustine, Marpole at 7:30pm. Diocesan Council is adjourned for the months of July and August.