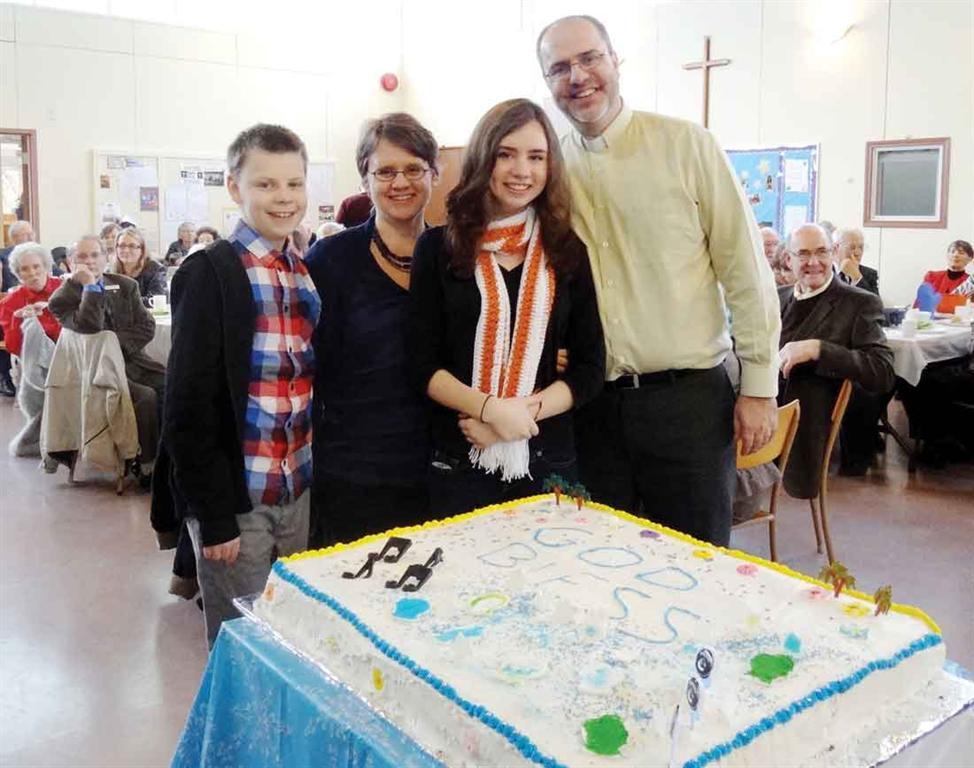 On Sunday January 15, 2012, St. Mark, Ocean Park celebrated the five and a half years that the Rev. Jonathan Blanchard had ministered to the needs of the parishioners. Over 200 attended a luncheon following the 10 am service and enjoyed large quantities of a wonderful shepherd’s pie lovingly prepared by Janet Van Nes, salads donated by parishioners and a huge “God Bless” cake organized by Hilda and Kathryn Smith. Numerous parishioners spoke and thanked Jonathan and his wife Deanna, (St. Mark’s Music Director), for the contributions that they had made. Paul Mills provided a successful “roast” of some of the memorable and extremely funny happenings that had involved Jonathan over the years. Among other individual gifts and cards from parishioners, the Blanchards were presented with a large framed artistic rendition of St. Marks.
Jonathan made special reference to his experience at St. Mark’s as “extraordinary” and that he had been privileged to work with so many “extraordinary” people and that we had all seen St. Mark’s grow by Gods “extraordinary” grace. He prayed that the Parish would keep Jesus at the centre of every event and every worship service. Jonathan has been appointed to an intentional interim ministry at St. Aidan’s Church, Winnipeg in the Diocese of Rupert’s Land and we pray for Jonathan, Deanna and their children as they begin this new ministry.

Image: The Blanchard family gathers around the “God Bless” cake.