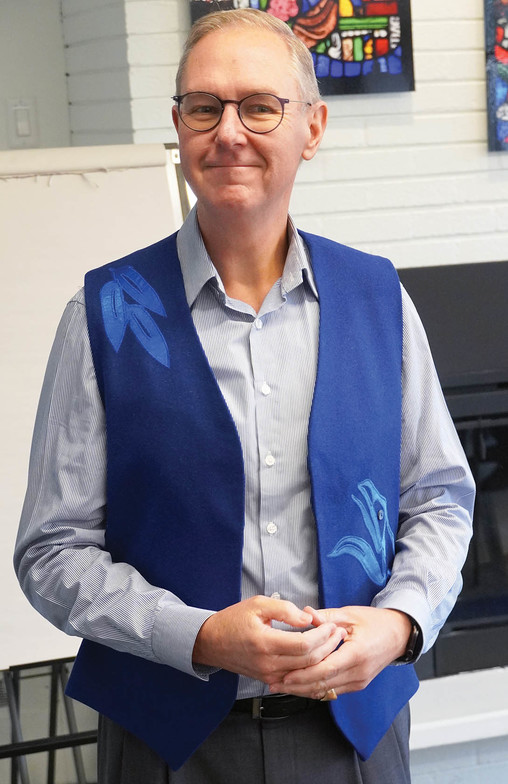 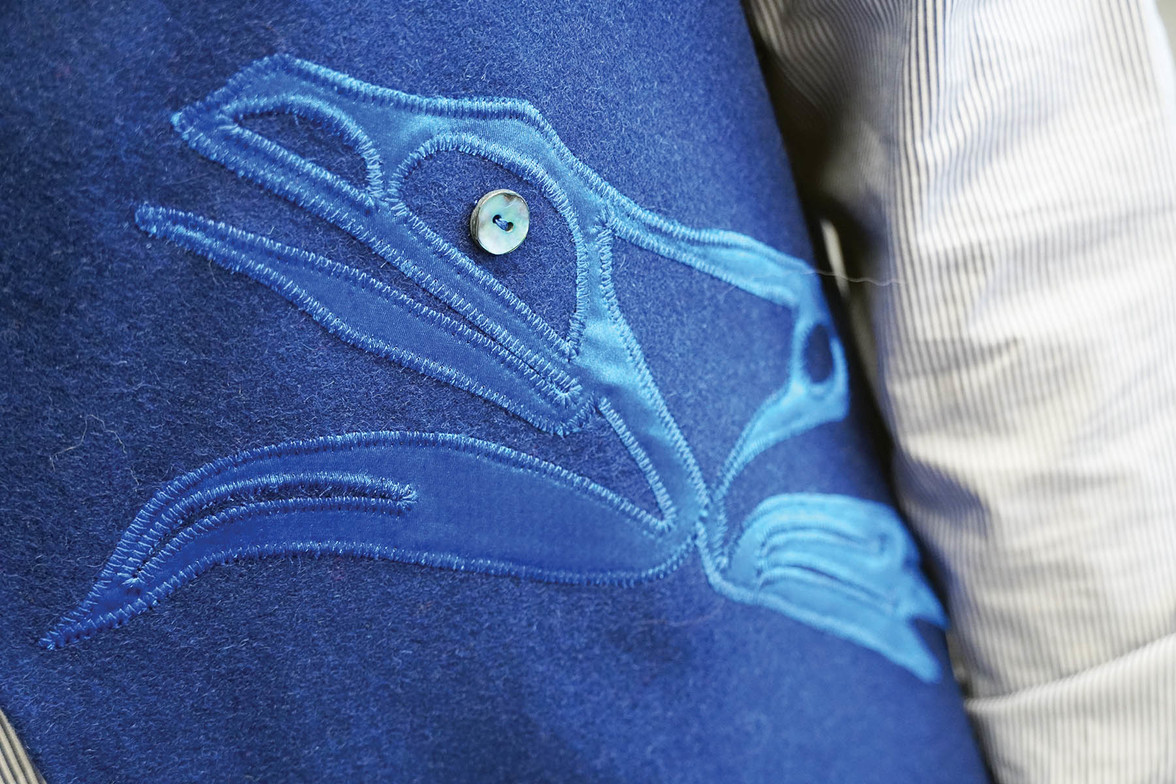 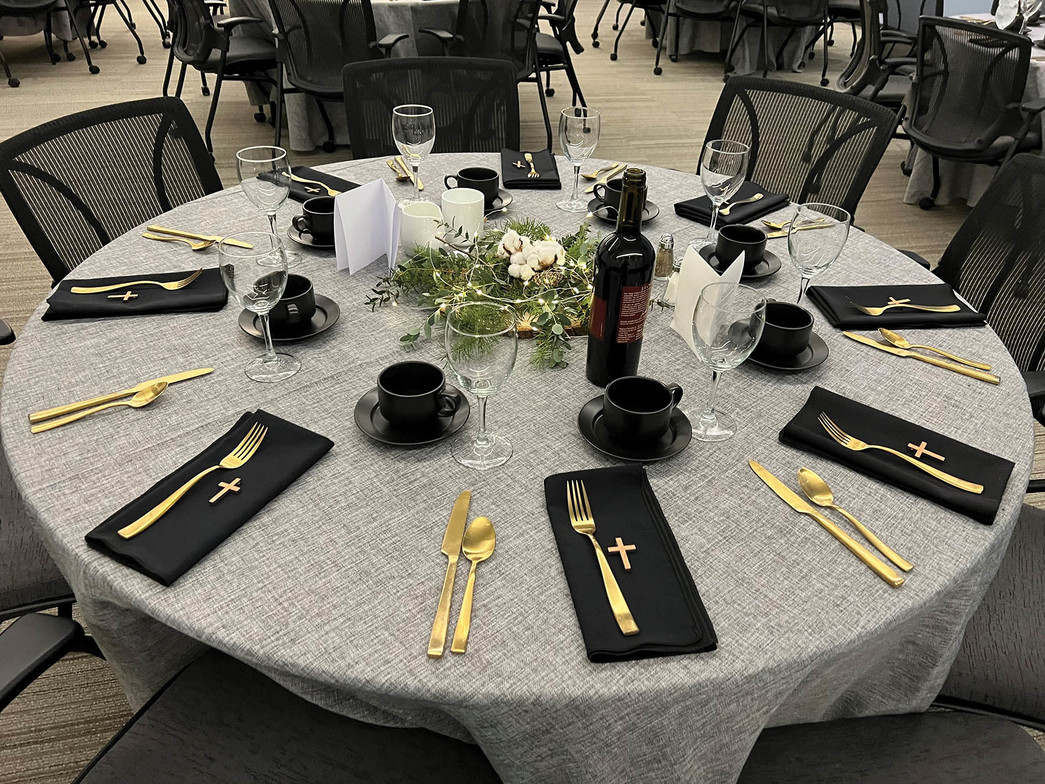 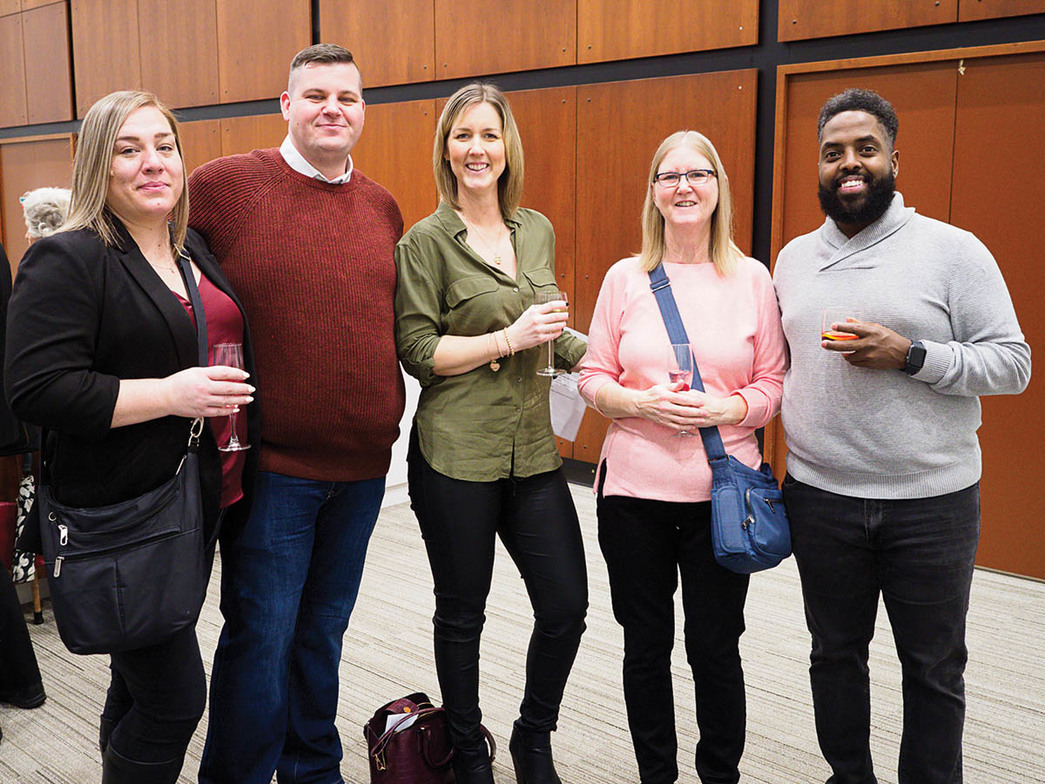 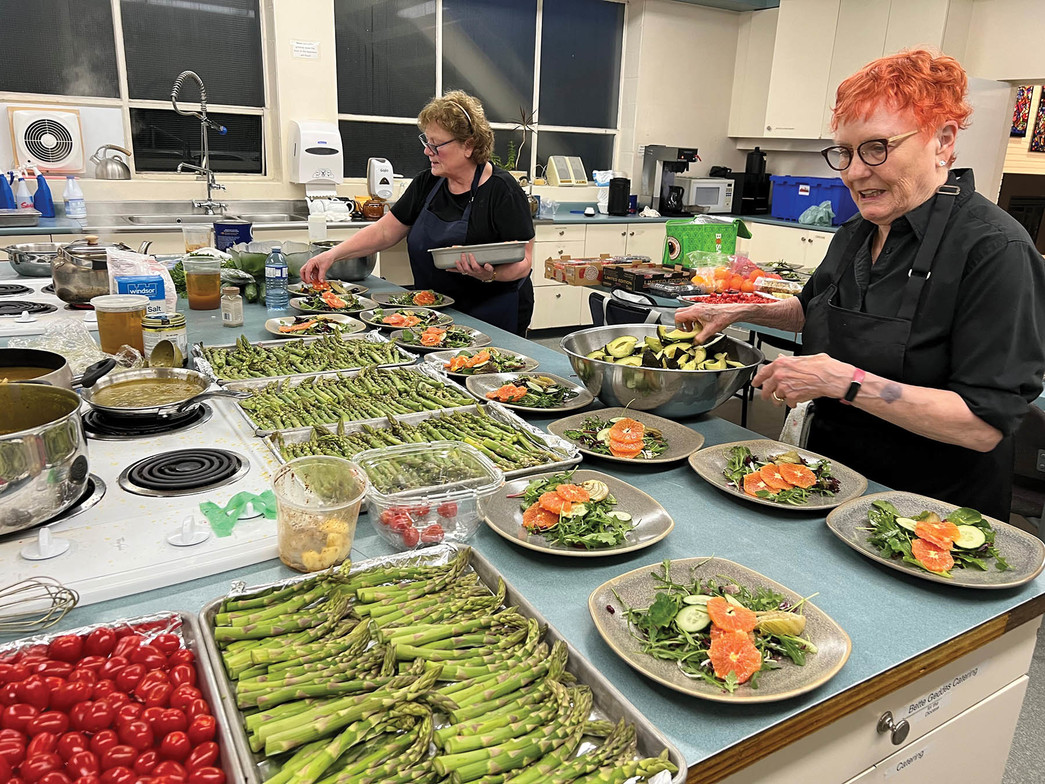 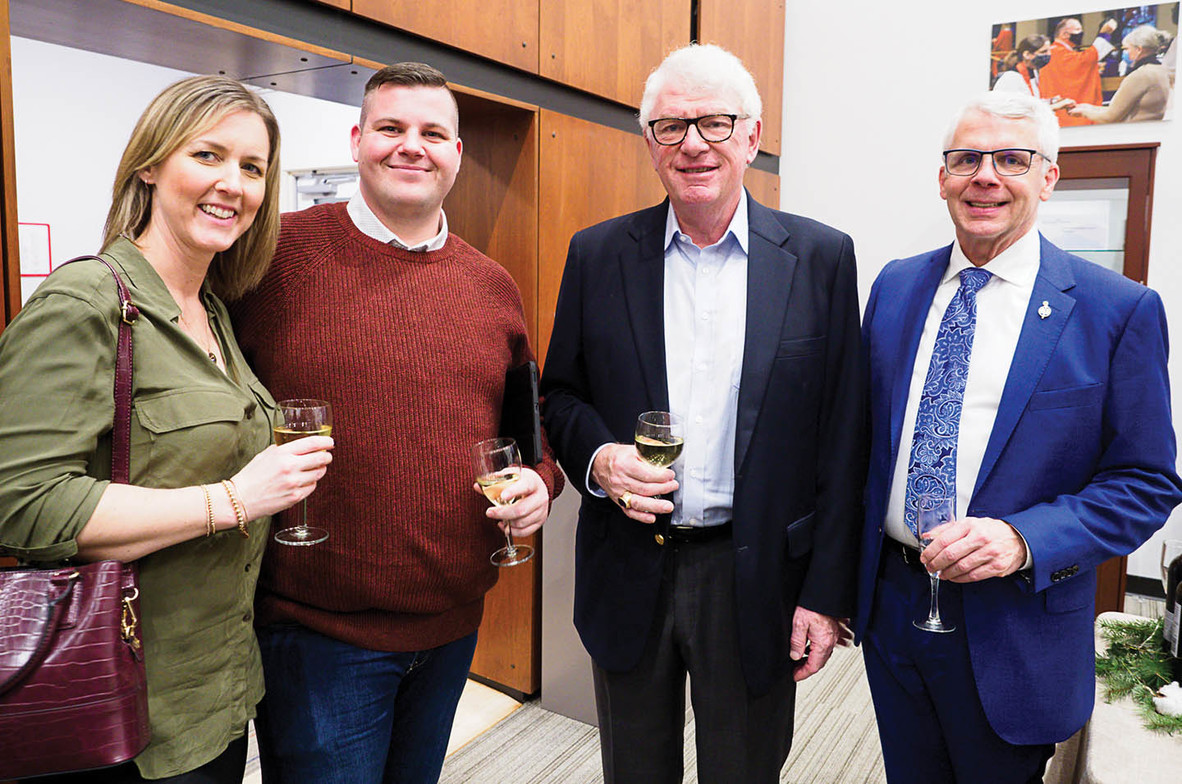 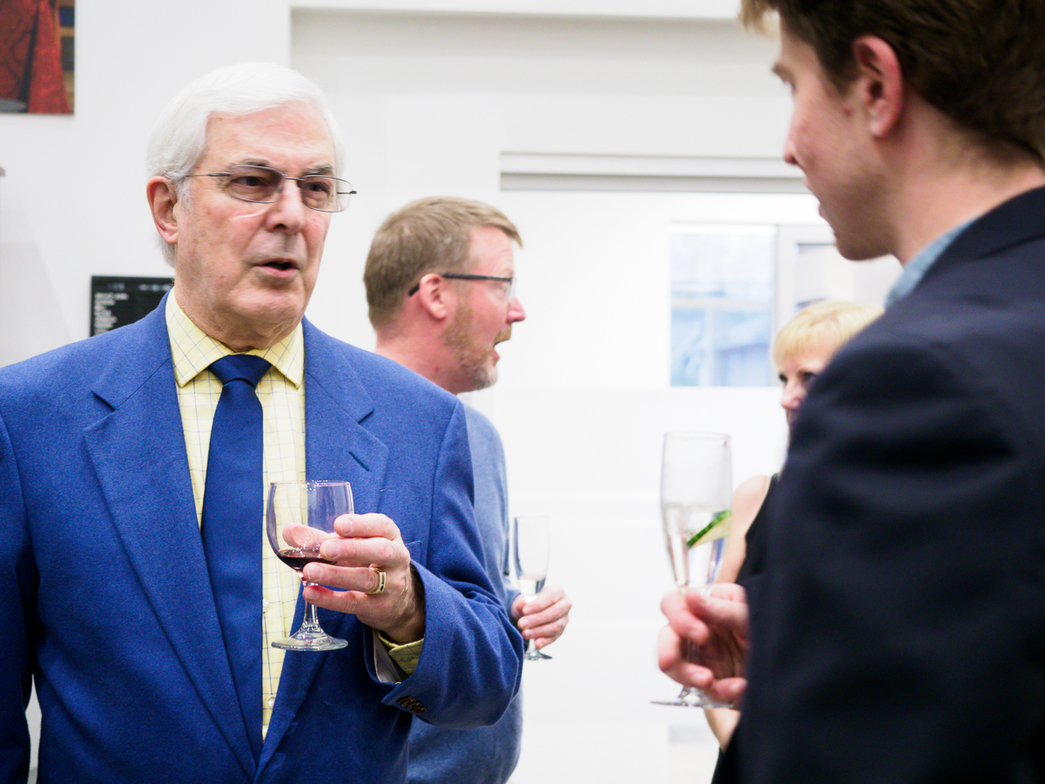 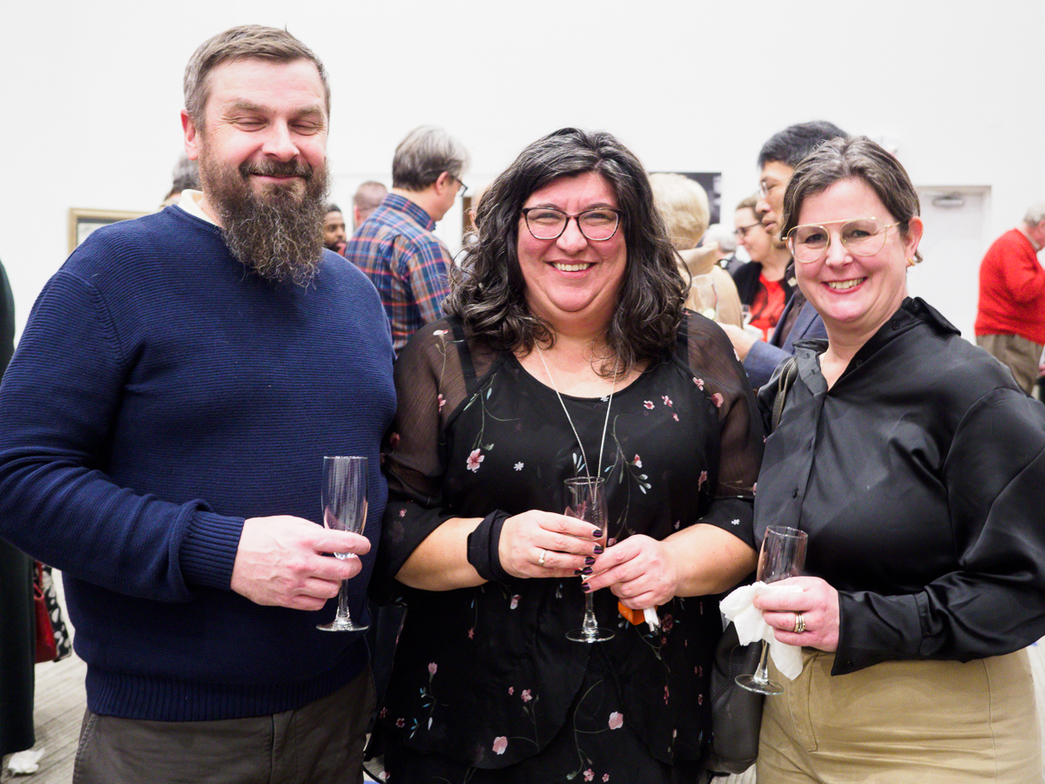 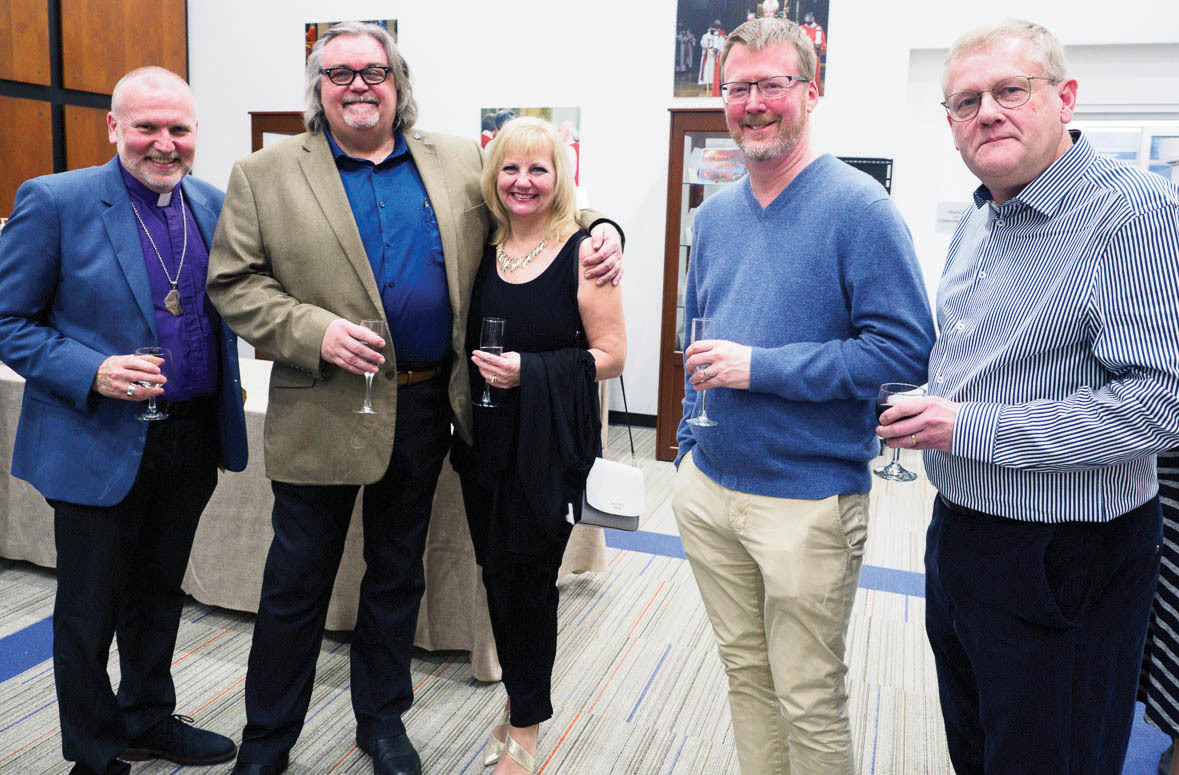 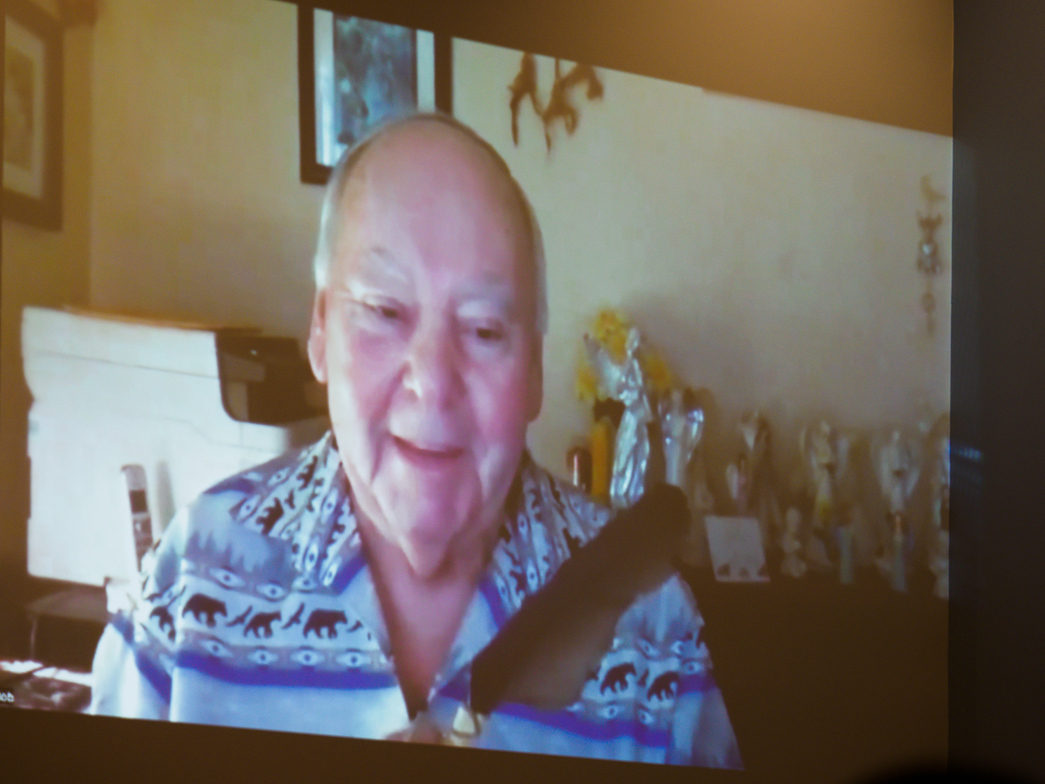 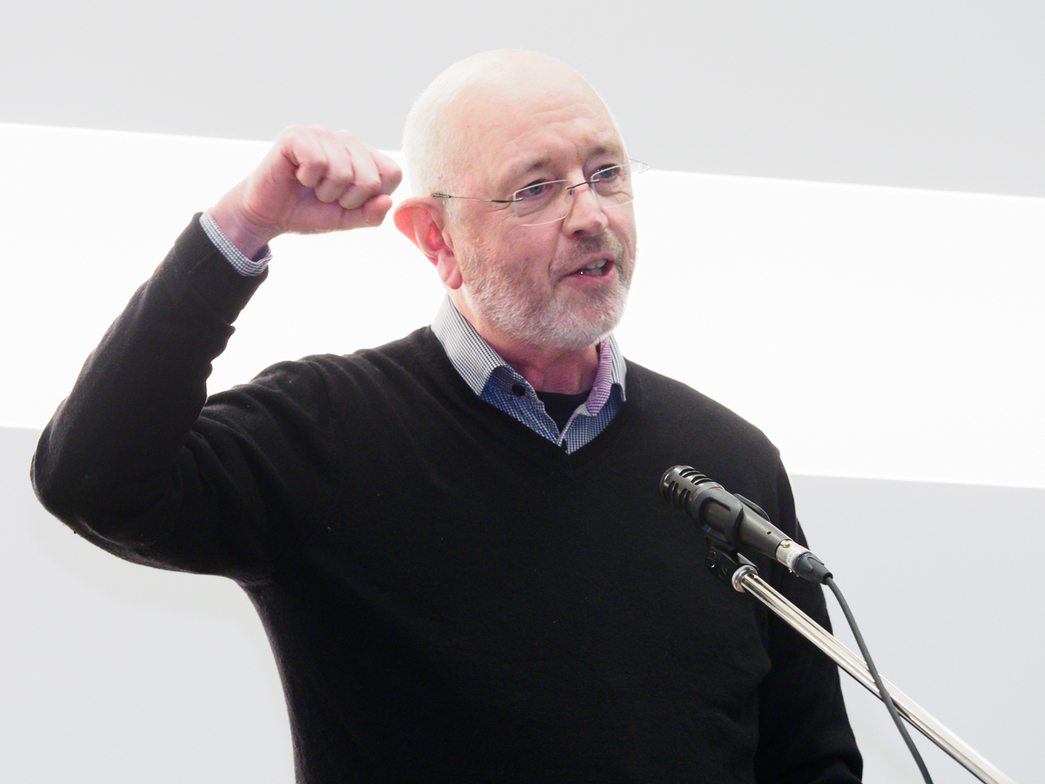 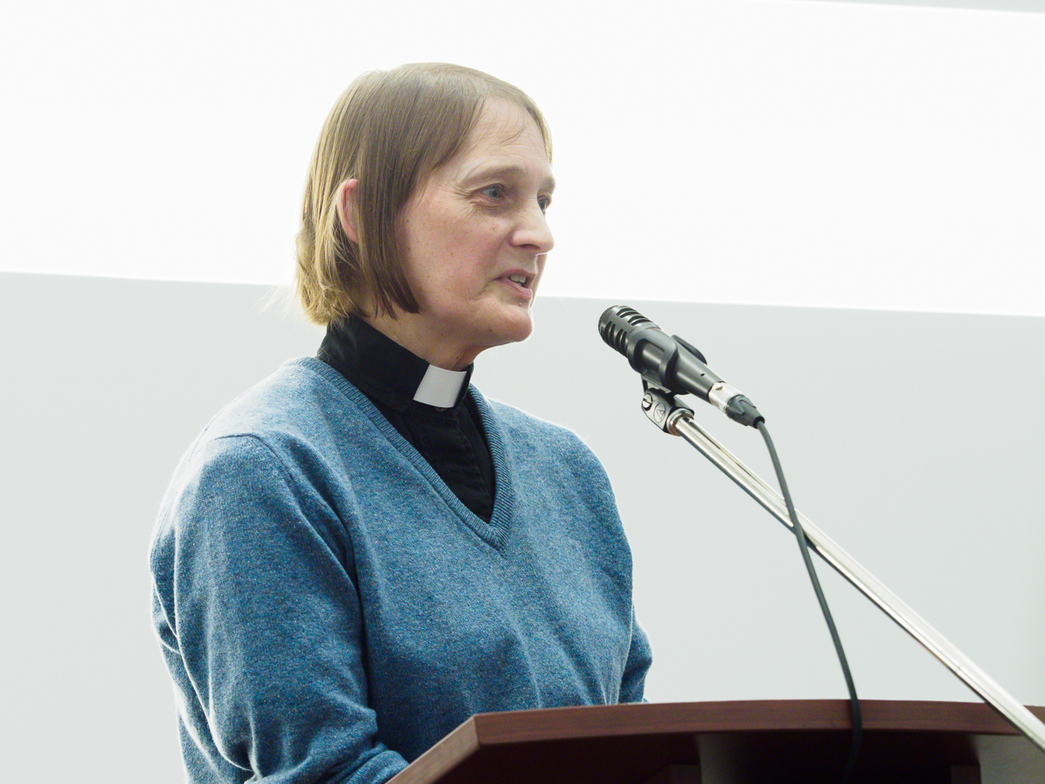 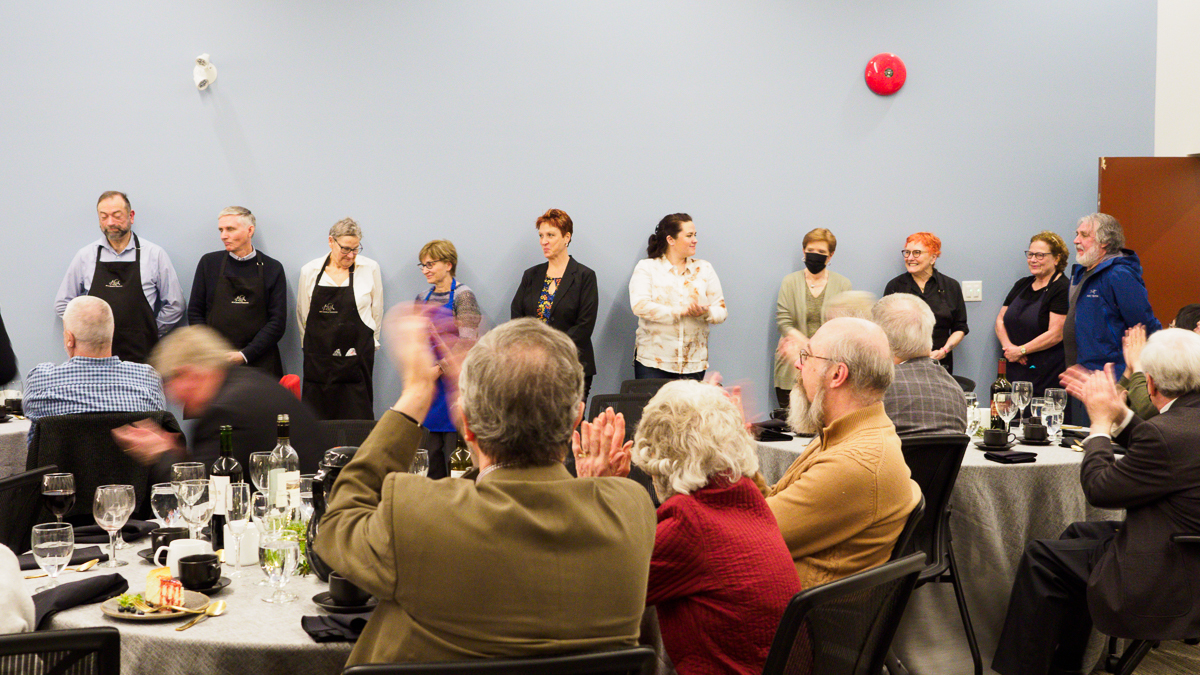 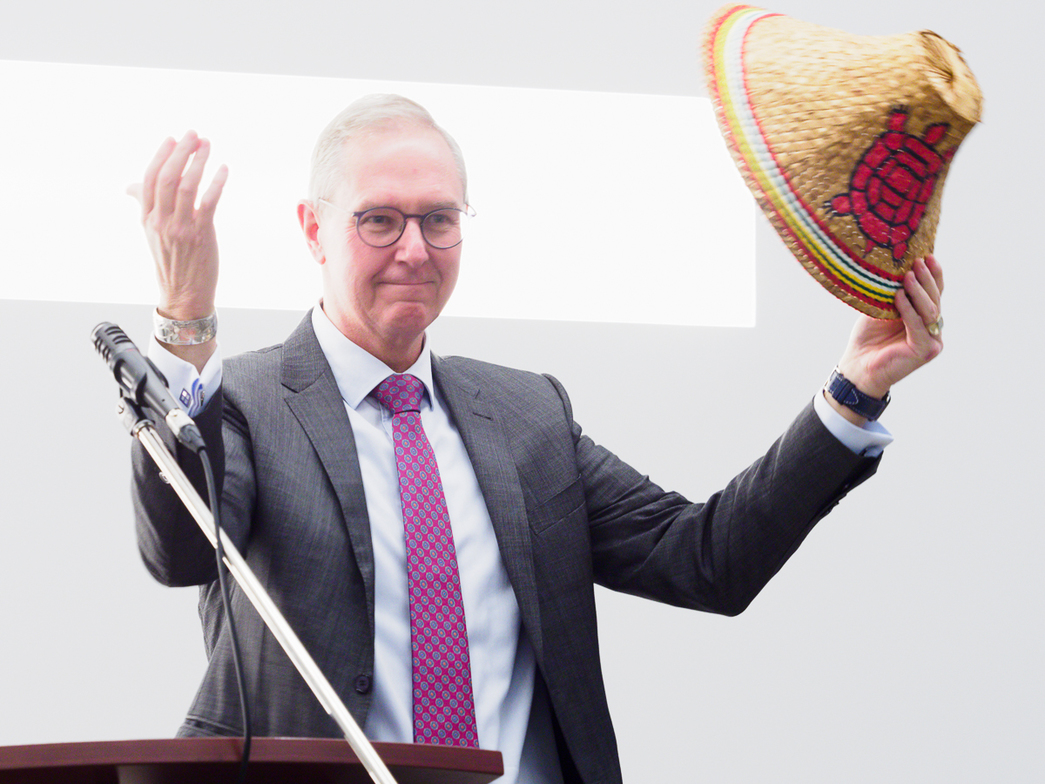 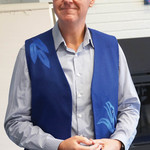 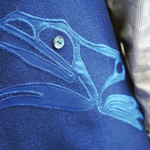 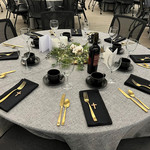 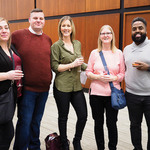 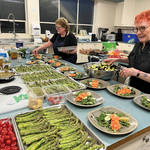 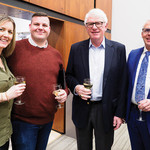 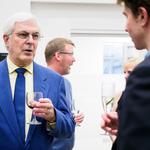 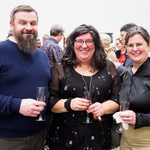 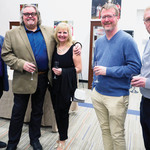 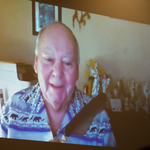 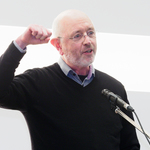 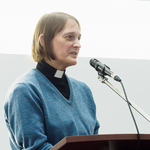 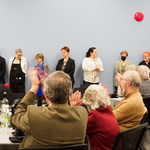 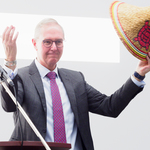 About an hour later the staff gathered again, this time for lunch, a chance to say goodbye to Fr. Fenton and present him with a gift. Fr. Fenton chose Japanese food, and all staff members present that day had ordered their dishes in advance. The Synod staff custom is for each member of staff to say a few words about their departing colleague. But before that, there was a gift presentation. Bishop John had arranged on behalf of the staff for a handmade custom crafted vest to be created by Erica Lucille ‘Rikki’ Kooy, ODNW - LEX’LEX TCETS’ NUW enx’, Spirit Elk Woman. Rikki is an Elder and designer from the Secwepemc and St’atl’imc Nations, and a third-generation residential school survivor. She is also a member of the ministry teams at Christ Church Cathedral and St. Hildegard’s Sanctuary located at St. Faith’s, Vancouver. The blue vest is adorned on the right shoulder with a three feathers applique, they represent three words Rikki considers to be central to the reconciliation journey: Love. Purpose. Reconcile, and on the lower left a spirit animal (a frog) applique. In Rikki Kooy's tradition the frog is the animal that bridges two worlds.

On Saturday, January 7, the Synod gathering spaces were turned into a banquet facility with tastefully designed table settings adorning the 11 round tables and the two head tables. Thanks to Bishop John as M.C; building administrator, Regan Gorman; serving team leader and co-designer, Jane Dittrich, ODNW; Sharing Abundance caterer and co-designer Bette Geddes, ODNW and their teams, the event was a huge success. More than 90 friends and family gathered to share a three-course meal and one dozen speeches (not too much "roasting") from Douglas's closest friends and colleagues.

Douglas was delighted to welcome members of his family to the dinner to join him at the head tables: sister, Cheryl Lynn Bruneau; nephew, Tyler Potter and his wife, Heather; niece, Alexis Hamilton and her fiancé, Mahir Aman and of course, his husband, Keith Landherr. Keith had prepared a surprise for Douglas – a pre-recorded Zoom address from the eldest member of the Fenton family, Robert who offered warm memories of his younger cousin and a blessing that was an acknowledgement of the Fenton family’s Métis heritage. During the five-minute video, ‘Bobby’ Fenton regularly referred to Fr. Fenton as ‘Doug’ not a diminutive that those of who know him well hear very often. This theme was repeated during the duet presentation by niece, Alexis and nephew, Tyler who affirmed that the guest of honour is only known to them as ‘Uncle Doug’.

Bishop Stephens did a great job moving the programme along which included the testimonials from friends (and the three family members). When the last of the speakers left the lectern it was time for the presentation of the gift. Everyone who was invited to the dinner was given an opportunity to contribute to the gift, an original Cedar hat, crafted on the Sunshine Coast by First Nations artist, Shy Watters. The colours surrounding the brim affirm Fr. Fenton’s Métis heritage and on the front of the hat is a red turtle, his spirit animal. The dinner closed with Bishop John asking Douglas and Keith to stand in front of the lectern facing the guests while he led all who had gathered in prayers of blessing for the couple as they enter into this new phase of life and ministry.

Fr. Fenton will continue to serve the diocese using his experience to assist the diocesan coordinator for refugee resettlement, Dr. Shakuntala Soden. 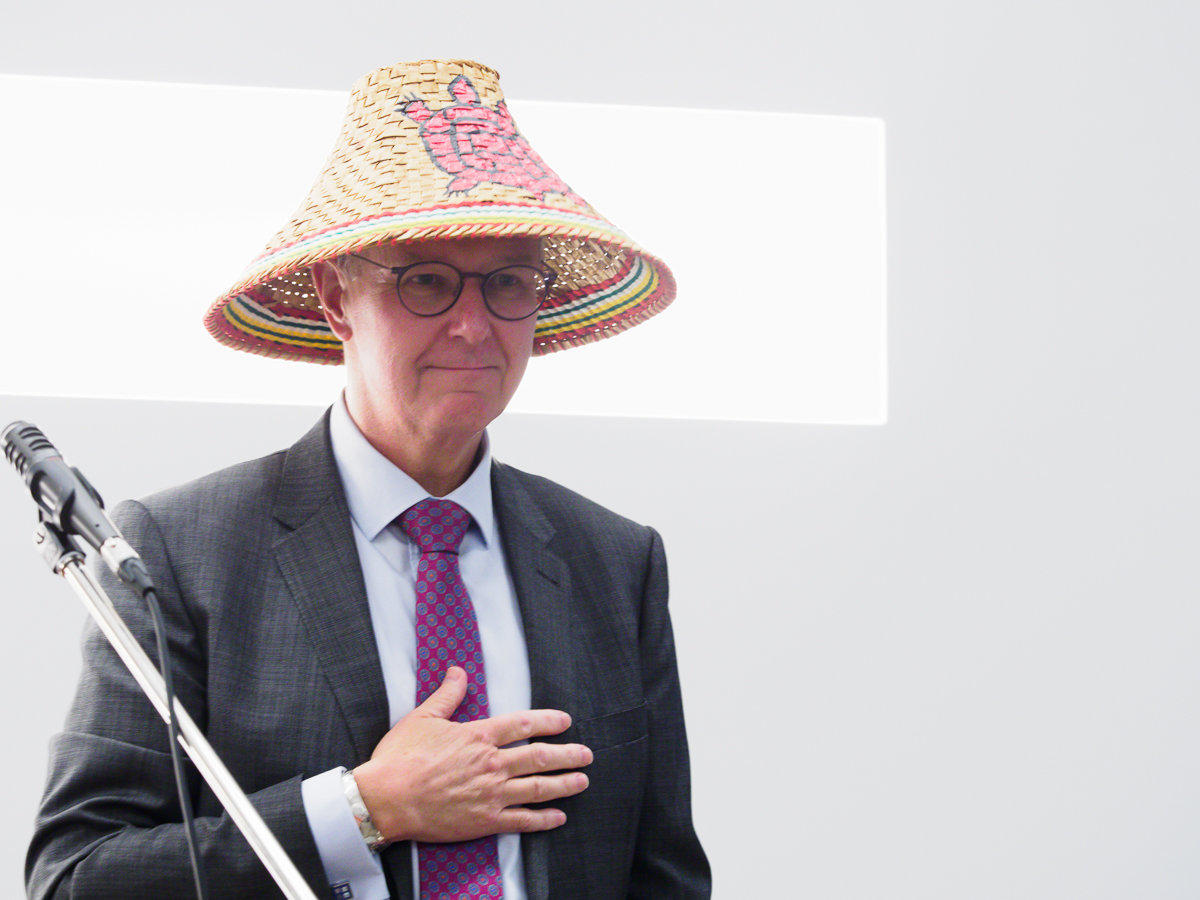 (To view many more photos with captions please follow this link to a photo album located at Anglican Conversation, the Facebook page of the Diocese of New Westminster.)

All photos by Wayne Chose, ODNW except where noted.