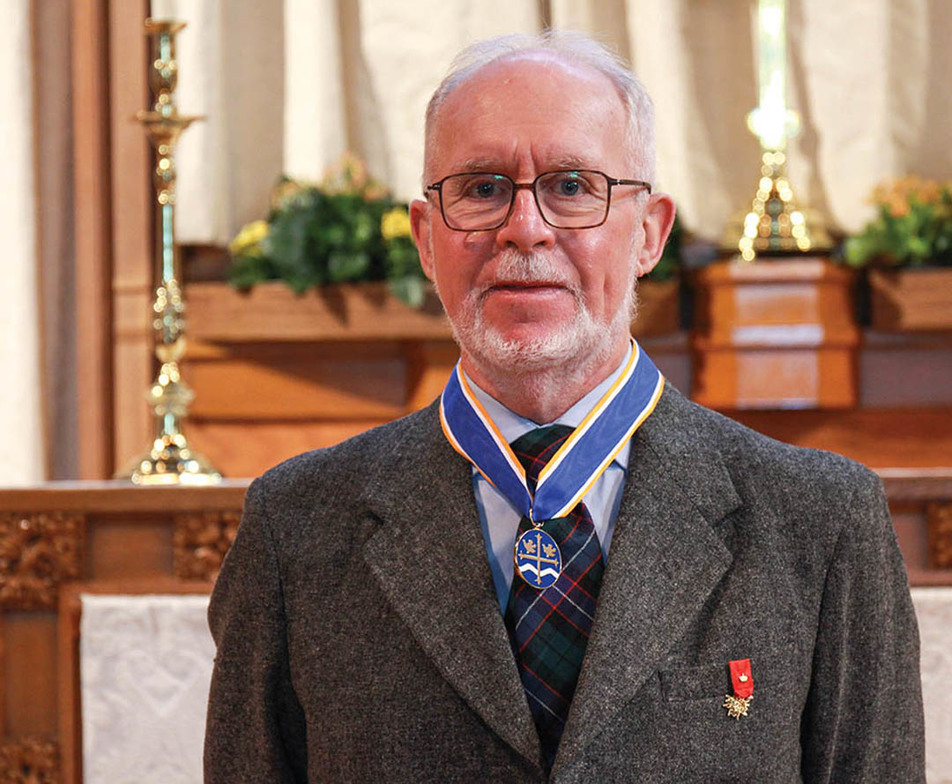 Glen is well-known throughout the Diocese of New Westminster, Ecclesiastical Province of BC and Yukon, Anglican Church of Canada and in the Episcopal Church for his profound faith and his commitment to Christian Stewardship in all its forms.

Glen lived in British Columbia his entire life, born in the East Kootenays, raised in the village of Galloway, BC and went to school in Fernie, BC. He moved to Vancouver to attend the University of British Columbia and soon after began attending the Parish of St. Mary’s, Kerrisdale (SMK). He was a parishioner for almost 46 years and was invested into the Order of the Diocese of New Westminster in 2020.

His Citation for the ODNW reads as follows:

At St. Mary’s Kerrisdale, in this diocese, nationally, and internationally, Glen has been a tireless steward and advocate for stewardship - raising and managing funds for the church’s mission. He has served at all levels on committees too numerous to mention.  Glen is also a man of prayer, a musician, a reader, a Eucharistic minister, and has been a board member of Missions to Seafarers and Camp Artaban.  Passionate about social justice and human rights issues, he is a member of the Executive Committee of Cristosal where he serves as Secretary and on the board.  We all know Glen as “donorguy,”- the man who gives of himself.

In 2003, Glen was appointed to Synod Office Staff as Director of Planned Giving, and it is through that role that many in the Diocese of New Westminster came to know him and benefit from his many gifts. He brought with him skills in fundraising, campaign management, not-for-profit management and process, financial planning, tax planning, and wills and estate planning, just to mention a few.

In the years leading up to his December 31, 2017 retirement, Glen was additionally responsible for stewardship in the diocese, working closely with the Mission and Ministry department, planning and presenting workshops and annual stewardship campaigns for diocesan parishes.

In 2018, Glen was invested into the Sovereign Order of St. John of Jerusalem, Knights Hospitaller.

Glen’s career was also his vocation and his passion. As a parishioner at St. Mary’s, Kerrisdale he regularly served in leadership roles and for more than two decades dedicated himself to that parish’s continuing ministry of compassionate service bringing aid and support to the people of El Salvador. Glen became deeply involved in this ministry and was appointed to the Board of Directors of Foundation Cristosal, a collaboration born in the year 2000 between Episcopalian clergy in the US and El Salvador as a way for individuals and churches from North America to share relationships and resources with the Anglican Church of El Salvador focusing on the pressing need for justice and rights in that country still reeling from civil war and exploitation by corporations and foreign governments. He travelled to El Salvador numerous times including 3 times to work as an election observer for the presidential and legislative/municipal elections.

During his years on Synod staff, he continued to improve his skills, pursuing professional development opportunities by attending workshops and seminars.  Glen undertook studies in theology and parish development, receiving a Master of Arts in Theological Studies (MATS) from VST in 2011, and a diploma from the Diocesan School for Parish Development in 2013. He served numerous times as a Delegate to General Synod and to Provincial Synod representing the Diocese of New Westminster, and as a parish delegate to Diocesan Synod

Glen was a sailor and shared his skills during many summers with campers at Camp Artaban. He enjoyed cycling and photography and was a fine pianist, a talent that he often shared with his parish and at diocesan events.

In a December 2017 interview Glen selected two pieces of Scripture as the texts that best describe how he lives into his faith:

“Come to him, a living stone, though rejected by mortals yet chosen and precious in God’s sight, and like living stones, let yourselves be built into a spiritual house, to be a holy priesthood, to offer spiritual sacrifices acceptable to God through Jesus Christ.”

“What good is it, my brothers and sisters, if you say you have faith but do not have works?

Can faith save you? If a brother or sister is naked and lacks daily food, and one of you says to them, ‘Go in peace; keep warm and eat your fill,’ and yet you do not supply their bodily needs, what is the good of that? So, faith by itself, if it has no works, is dead.”

Glen is survived by his wife Christine and their two daughters Tonia and Lisa.

A Celebration of Glen’s life and ministry will be held at 1pm Friday, August 26 at St Mary’s, Kerrisdale.