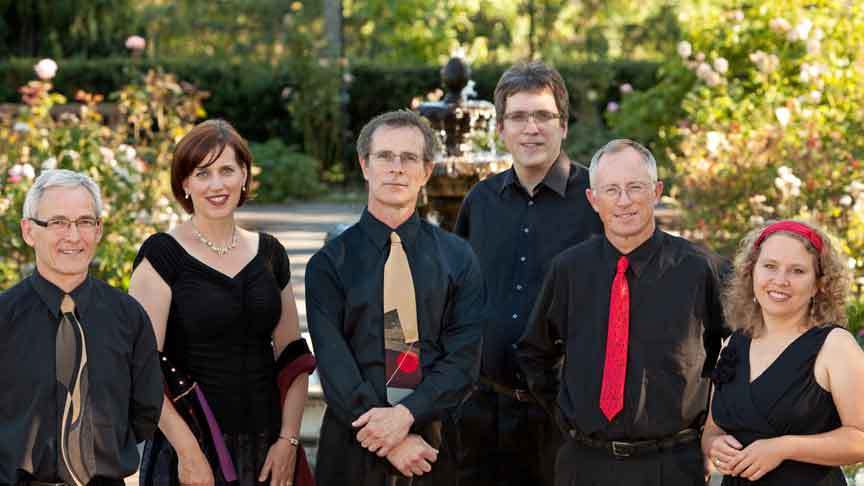 Hexuberance!! Hexaphone, Victoria’s six-member a capella vocal ensemble, is coming to Hope on July 1st at 7pm.
“This group is thought of as Canada’s only professional vocal sextet and they were chosen to premiere BC 150 Project: Five Songs for British Columbia,” says Darla Dickinson, supervisor of Christ Church Anglican & National Historic Site. “Rather fitting I think – seeing as we are celebrating our 150th anniversary ourselves this year!” Built in 1861, Hope’s Christ Church is the oldest church on BC’s mainland.
Hexaphone is a sex member group from Victoria; they are regularly invited to perform at arts events, including the Victoria Symphony’s New Currents Festival, the Voice Festival, and the New Music In New Places concert series sponsored by the Canadian Music Centre. In 2008, Hexaphone was chosen and commissioned by the Canadian Music Centre to celebrate BC’s 150th anniversary.
The concert is the first stop of Hexaphone’s ‘Hexuberance’series. The concert will be at Christ Church National Historic Site, located at 681 Fraser Avenue, at 7pm. Doors open at 6:30.
“This is a great opportunity and we are so excited to have Hexaphone visiting us during our 150th anniversary,” says Dickinson. “It is also good timing as the church will still be decorated for the Flower Festival, which runs from June 25-July1). The theme of this year’s Flower Festival was inspired in part by the 150th anniversary and the natural beauty of Hope – which made early towns people convinced that Hope would be a major transportation hub and provided motivation to complete the church for future prosperity.
Tickets for Hexaphone are available are Romanos, Pages Book Store, the Hope Visitor Information Centre. Tickets for both the Flower Festival and Hexaphone are available at Hope Pharmasave. For more information call 604 869 5402