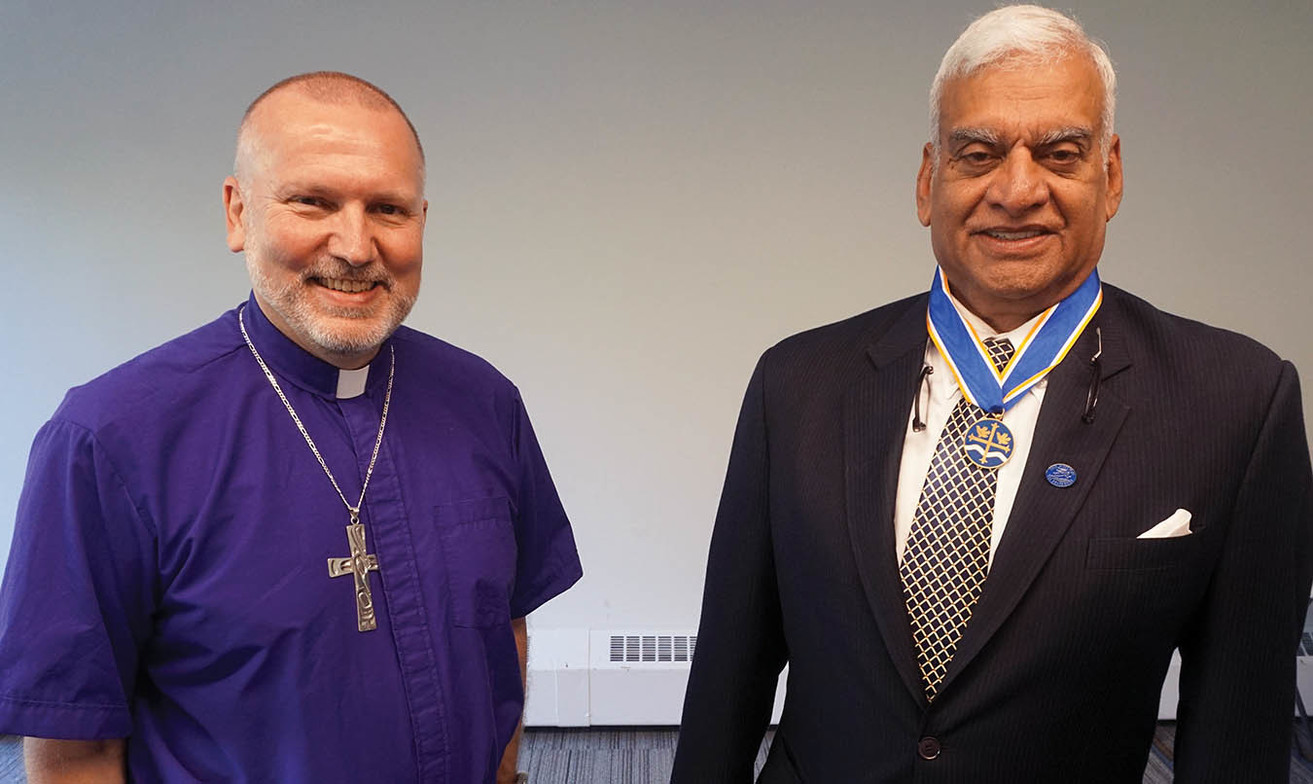 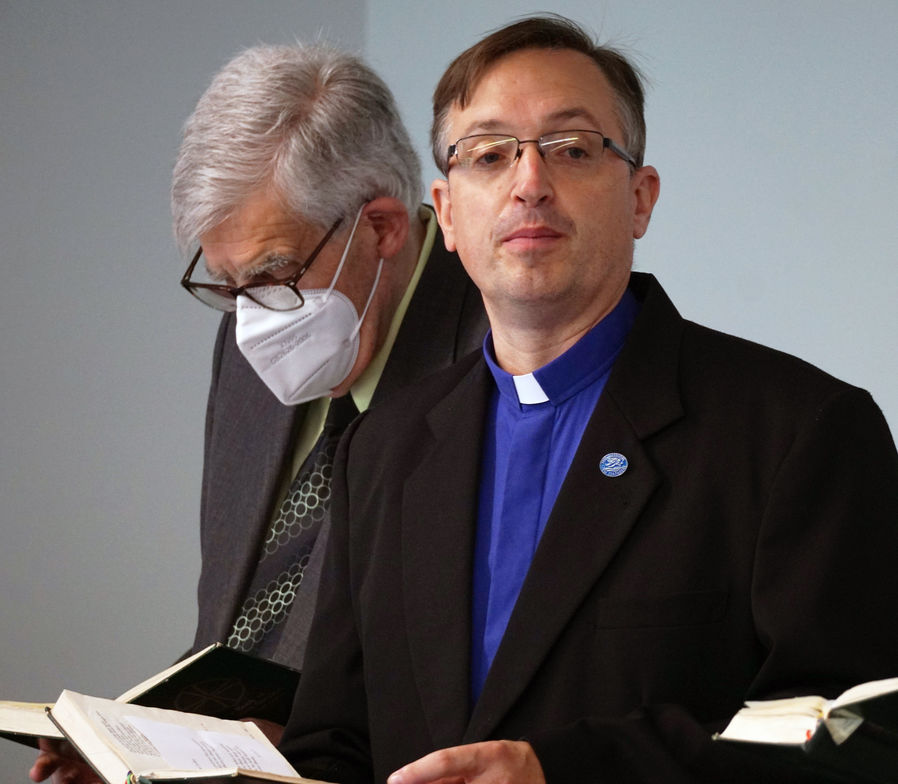 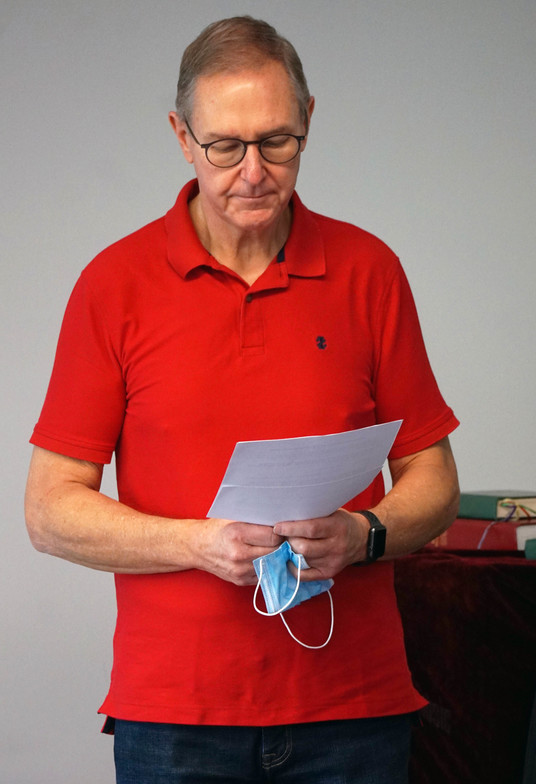 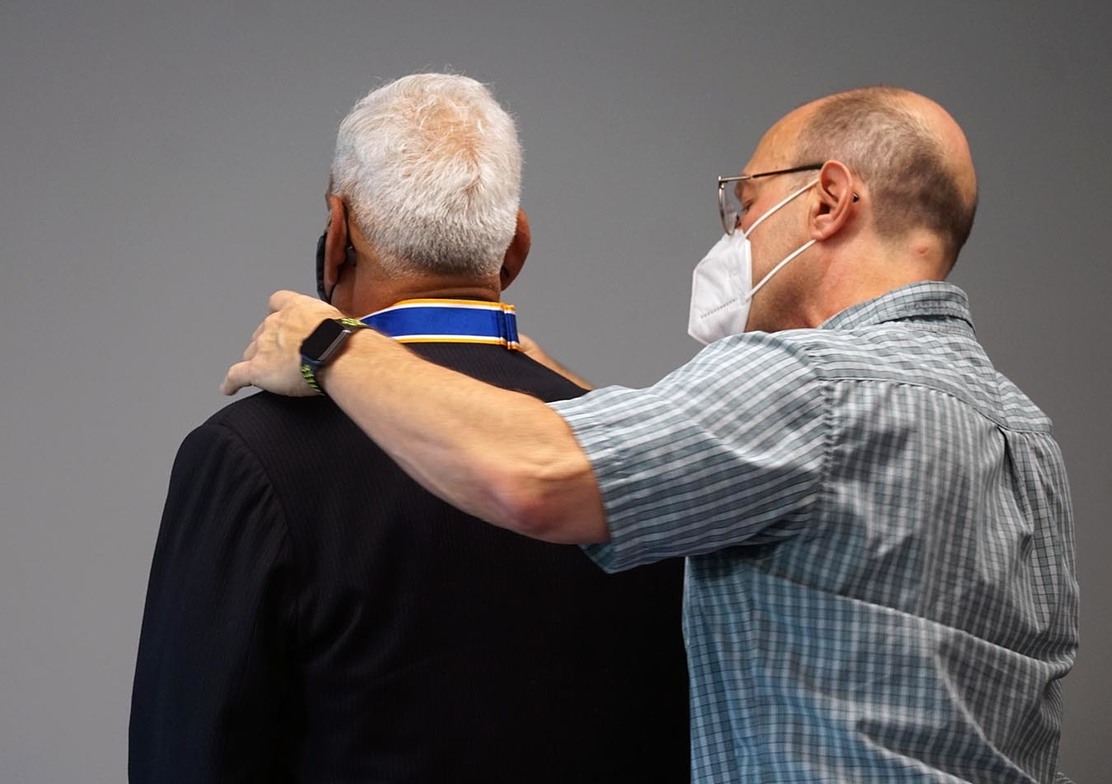 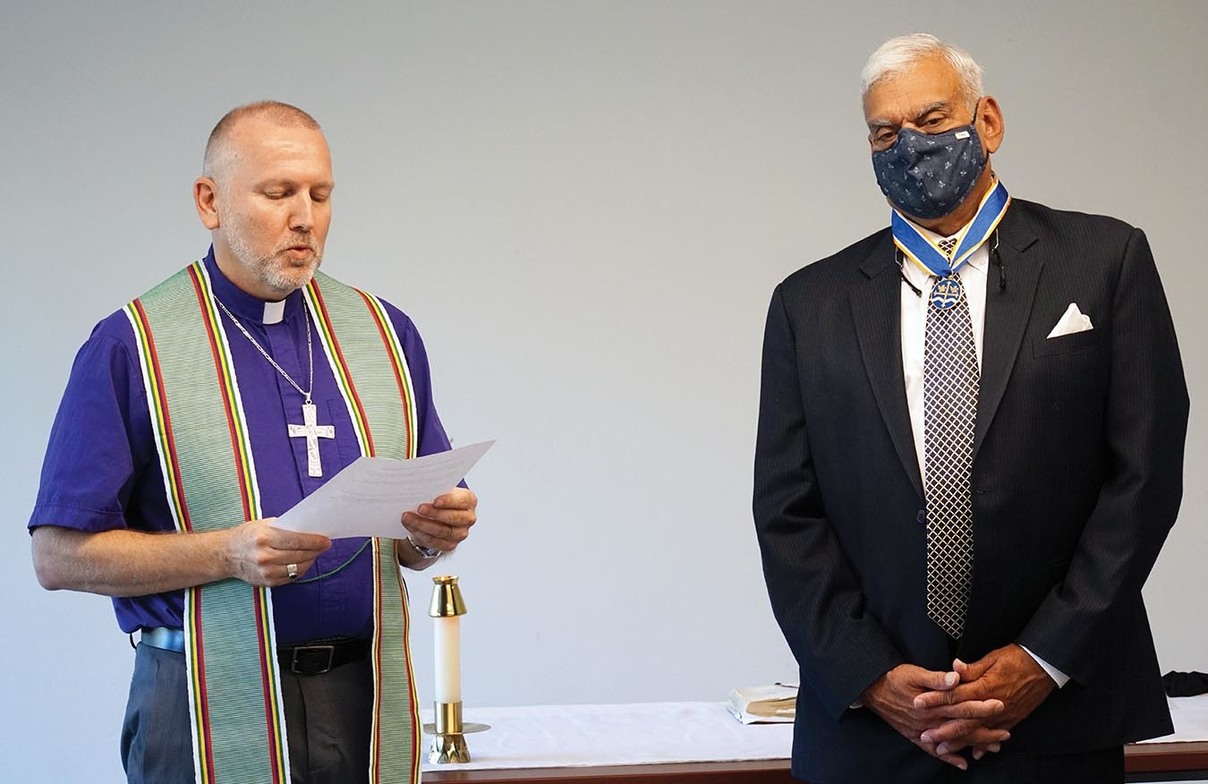 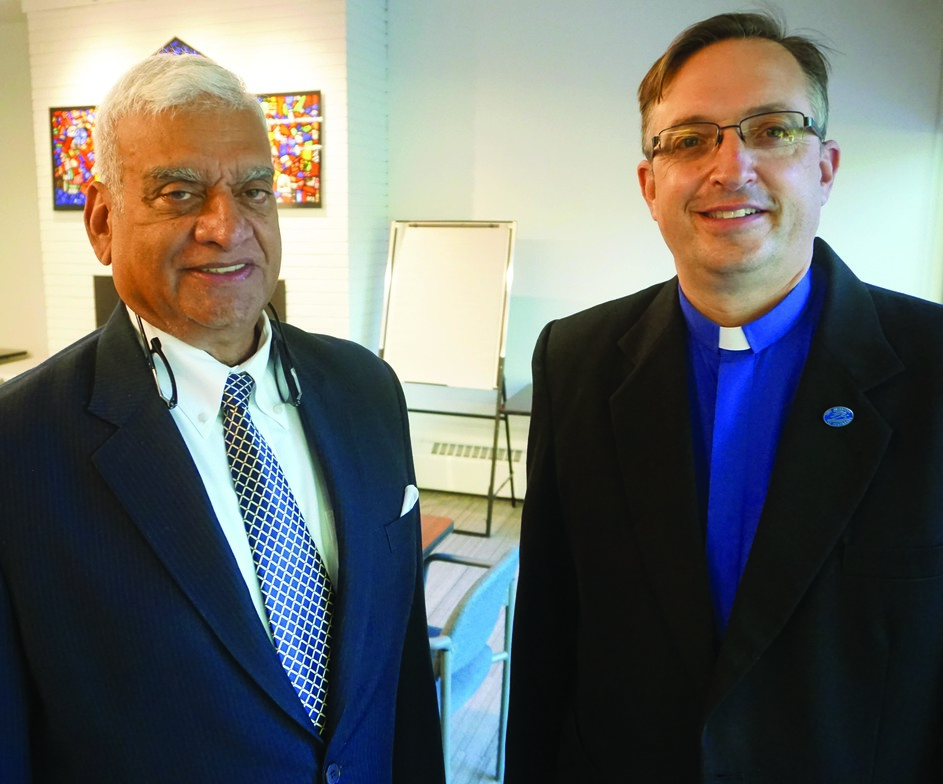 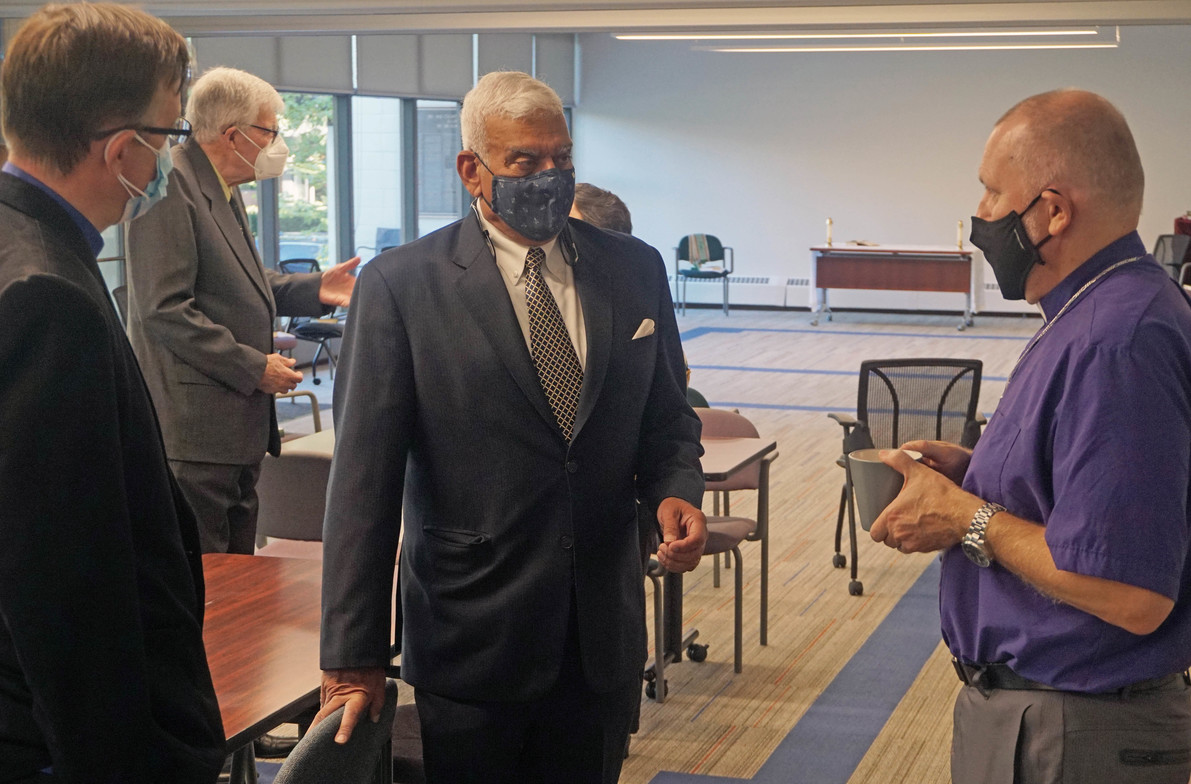 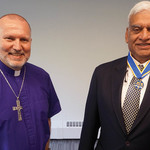 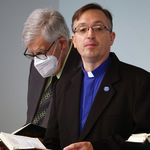 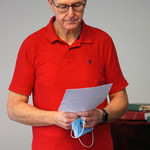 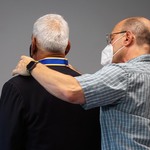 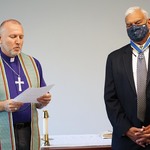 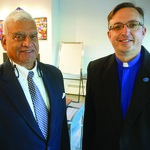 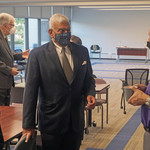 In June 2020, Captain Oscar Pinto agreed to accept investiture into the Order of the Diocese of New Westminster as an honorary inductee for his outstanding service to the ministry of caring for those who work in the shipping industry and for his support of the Mission to Seafarer's.

With the cancellation of the diocese's annual Investiture Event scheduled for November 2020 and the ongoing restrictions on gathering, the official investiture had to wait until September 25, 2021. On the morning of September 25 during the Eucharist that began the annual Diocesan Council Working Retreat Day, Captain Pinto was invested into the ODNW. Diocesan Dean, the Very Reverend Chris Pappas placed the medal and ribbon around his neck, in lieu of a Citation, the Venerable Douglas Fenton read a brief biography of Captain Pinto's service and Bishop John Stephens led the prayers and officiated the investiture. Here is the bio that Archdeacon Douglas Fenton read prior to the investing:

Captain Oscar Pinto began his sea career with the Shipping Corporation of India (SCI) in 1973, and worked his way up, getting his Masters and Command in 1982.  Oscar joined Valles Steamship Company Ltd of Hong Kong in 1986, and then sailed onboard their various oil tankers as Master until 1992 before becoming Superintendent of the shore management team, responsible for HSE and HR.  He came to Vancouver in 1995, relocating with Valles from Hong Kong, and has been an active member of the local marine community ever since.  Oscar sits on numerous boards, including as Chairman of the International Ship-Owners Alliance of Canada Inc.-ISAC (2005-present); Chairman of the INTERTANKO-North American Panel (NAP) (2014-present); Director of the Bord of Valles Steamship (Canada) Ltd (2002-present); and also holds an executive role as Treasurer on the Board of the Chamber of Shipping of BC (March 2019-present).  He has been a Director of the Board of the Chamber of Shipping since 2018.  Additionally, Oscan sits on the Programme Advisory Committee of the British Columbia Institute of Technology (2013-present).  Oscar has always exhibited a great concern for the welfare of the crew with whom he sailed, and provided mentorship and support for all seafarers, especially those from his native India.  This background served him well as a Director of the Board of the Mission to Seafarers of Vancouver from 2000-2007 and 2010-2019 for a total of 16 years of service.  He was instrumental in the establishment of the Roberts Bank Seafarers Centre, acted as interim Chair through times of transition, and brought his experience to the work of caring for the seafarers.  Oscar and his family are active members of the parish of Sacred Heart Roman Catholic Church in South Delta, supporting parish outreach such as that to temporary migrant workers and the homeless and marginalized around Ladner.  He has been a longtime member and Chair of the Rotary Club’s North Shore Chapter.  Oscar has demonstrated effective leadership which has gained the respect and admiration of others.  He has also demonstrated a deep concern for the marginalized and actively responded to their needs.

Captain Pinto joins the other five honorary members of the ODNW:

PWRDF - Call for Nominations Link to the May 19, 2022 E-News North Van Parish Aids Ukraine Through Music