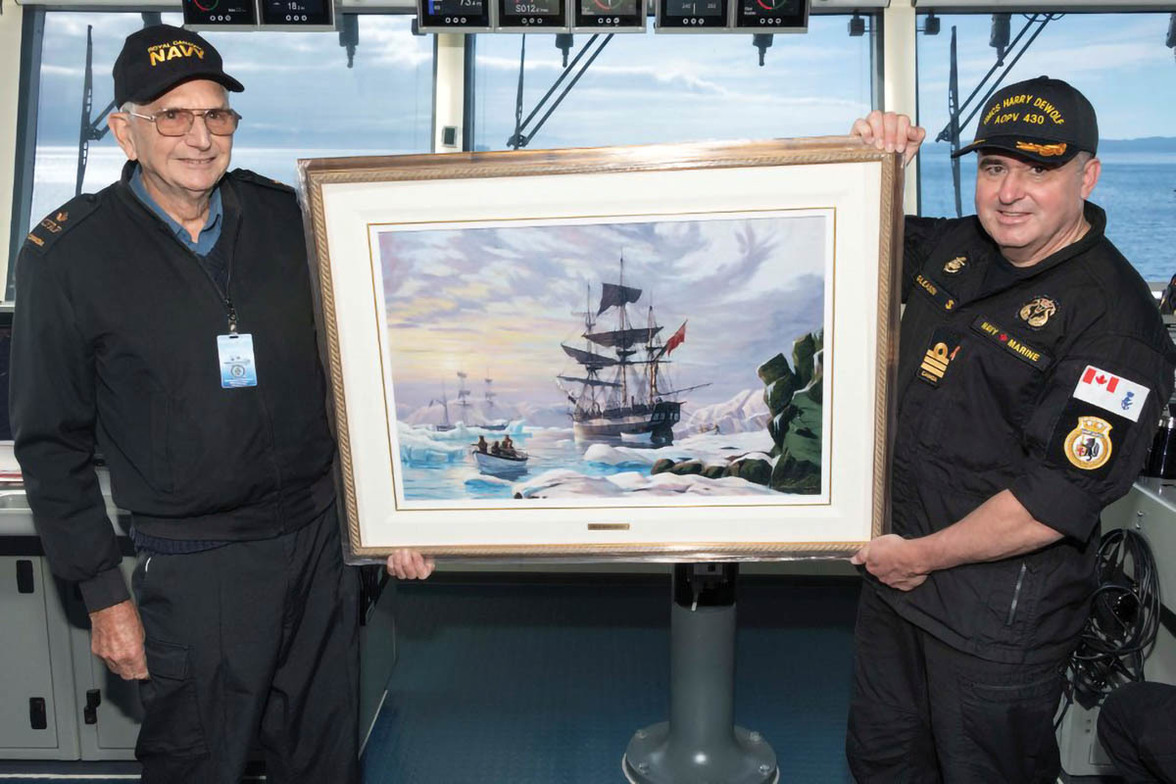 John Horton, Delta marine artist and parishioner of St. David’s, Tsawwassen, could not have imagined his painting of the Franklin Expedition’s HMS Erebus would one day hang aboard HMCS Harry DeWolf.

Harry DeWolf sailed into Vancouver Harbour October 1 having completed the first Northwest Passage transit of a Canadian Naval vessel since 1954.

In 2014, inspired by discovery of the wrecked Franklin ship, Horton painted a rendition of HMS Erebus which unexpectedly would have special significance to Harry DeWolf ‘s Commanding Officer Corey Gleason, and his crew. Horton presented his painting to the ship’s company, at the end of a three-day RCN Canadian Leaders at Sea (CLaS) outreach program in which he participated.

Horton was invited to join a group of 15 prominent Canadian Community Leaders from across Canada who boarded Canada’s newest warship at Lower Lonsdale’s Burrard Dry Dock Pier in North Vancouver and sailed in her to Victoria’s Ogden Point.

It is interesting to note that the famed RCMP St. Roch, first Canadian vessel, and second only to sail through the Northwest Passage, was built at the same Lonsdale location in 1928.

This brand new Arctic and Offshore Patrol Ship is the lead ship of its Class and one of six built or under construction to ensure Canada’s Arctic interests are secure. These patrol vessels are designed to operate anywhere in the world but especially in first-year ice of up to 1½ metres thick. Unlike icebreaking-vessels that normally operate only in icy waters, this new ship can operate in a wider range of conditions.

During the voyage to Victoria – where a large crowd was on hand to welcome the ship – the CLaS group learned to appreciate the ship’s amazing capabilities. While transiting the Gulf of Georgia and Haro Strait, the crew carried out in-depth demonstrations of the ship’s potentials including search and rescue, fire-fighting, damage control and weapons firing.

The following day’s agenda included informative tours of the Esquimalt Fleet Maintenance Facility and its Operations Centres, time onboard HMCS Calgary and submarine HMCS Victoria, and finally the Fleet Diving Unit and Damage Control School. Clearly, the CLaS group went home with a better understanding of Canada’s role in the Arctic and today’s global involvement of the RCN.

On a personal level, John Horton’s special interest in the Arctic prompted a rewarding conversation with Cmdr. Gleason whereby they discussed at length the ill-fated Franklin Expedition and how Harry DeWolf had followed Franklin’s tragic path. “Hearing how the ship anchored near the wreck sites enabling visits to graves of the crew, was an unparalleled privilege”, Horton said. “It was gratifying to learn that the ship’s company of approximately 87 sailors had become fully engaged with the history of the 1848 Expedition and gained a huge respect for those who had gone before”.

HMCS Harry DeWolf also called in at several hamlets inviting leaders and community members aboard. This was all about strengthening relations with communities in the Arctic and developing meaningful commitments to the people of the High North. From BC’s South Coast, Harry DeWolf will transit the Panama Canal to complete a circumnavigation of North America and return to Halifax in December.

At the conclusion of this recent segment of Canadian Leaders at Sea, participants were requested to involve their communities in furthering awareness of the important part played by the RCN in ensuring Canada secures its position and respect internationally.

To record this historic voyage, Horton is now working on a painting of Harry DeWolf in an Arctic setting.

John Horton, OBC, CSMA, FCA, resides in Tsawwassen and is captain of the 52-foot Delta Lifeboat stationed in Ladner. He is a current recipient of The Order of British Columbia.