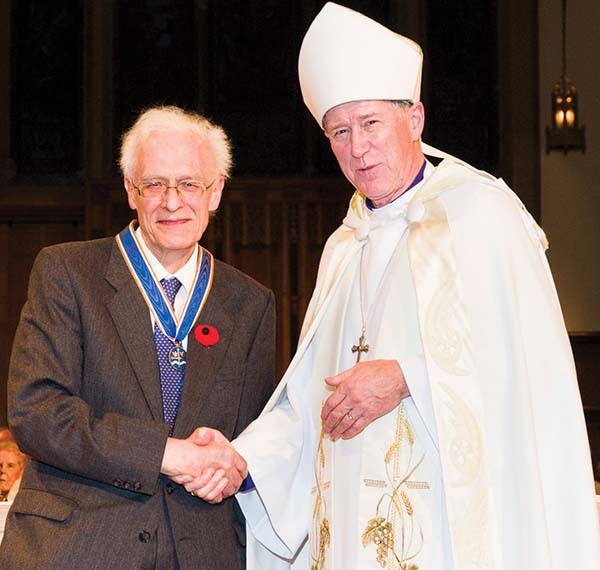 Peter was an involved member of Holy Trinity, White Rock (HTWR). He served for several years as People’s Warden and Rector’s Warden. He was a member of the choir, pastoral visitor, synod delegate and member of the parish council in addition to filling various roles during services. When overseeing the Sunday School, Peter initiated the labyrinth project, resulting in the production of a large canvas labyrinth which provides a means for quiet contemplation and spiritual renewal.

He was a member of and chaired various parish committees, most recently Chair of the Refugee Committee, working to bring a Syrian family to Canada! In 2013, Peter was awarded the Order of the Diocese of New Westminster. In 2017, he was pleased to be invited to be a participant in the Bishop’s Friends group of the diocese but was unable to proceed due to his illness. Peter was diagnosed with idiopathic pulmonary fibrosis in 2014 and it was this disease which led to the congestive heart failure which ended his life.

Peter was the son of William and Monica Johnson and attended Cleve House School and Bristol Grammar School before graduating with a teaching certificate from the College of the Venerable Bede at the University of Durham. He taught for two years and then obtained a Bachelor of Library Science Degree and later a Master of Arts Degree from the University College of Wales, Aberystwyth. Peter was a Senior Library Assistant at Leeds University for fourteen years, mainly as a cataloguer but also in public services in the Arts and Social Sciences, Medical, Dental, and Parkinson Libraries. He was additionally a part-time Tutor and Teaching Assistant at the Institute of Bibliography and Textual Criticism in the School of English at the university.

After immigrating to Canada in 1989, he completed a Master of Archival Studies at the University of British Columbia. Peter was the Community Archivist at White Rock Museum and Archives before accepting the position of Assistant Archivist at the City of Surrey in 1998. He became City Records Archivist in 2000, City Archivist in 2001, and Archivist-Curator of Heritage Collections in 2005. In 2006 Peter oversaw the move of the Archival Collection to the “new” facility – the 1912 Hall. He also played a key role in establishing an on-line database for the archives collections. He was an active member of the Archives Association of BC, serving on the Executive in 2010-2011.

Peter was a devotee of the written word, from classic literature and poetry (Paradise Lost and the Faerie Queen being two favourites) to modern writers such as John le Carre, Ian Rankin, and Patrick O’Brian. He loved to spend time in second-hand and antiquarian bookshops, usually finding something to add to his home library. He enjoyed drama, acting in and producing plays at Bristol Grammar School, Bristol Youth Theatre, and at College and University. There were many outings to Stratford to enjoy the works of Mr. Shakespeare. More recently Peter enjoyed participating in the church Christmas Eve pageants.

Volunteer activities included teaching English as a second language, literacy tutor, membership in the Kiwanis Club of Semiahmoo Bay (Chairman of various committees and President, 1992-93), Strata Council member, and after retirement in 2013, archival work at the White Rock Museum and Archives and membership on the Board of Directors for 2016-2017.

Peter is survived by his loving wife Carol and children from his previous marriage: Miranda (son Cameron) and Francis (son Michael and daughters Katherine and Natalie).

Those who wish to make a donation in Peter’s memory may specify the Refugee Fund at HTWR.

Previously published in the Obituaries Section of the Peace Arch News