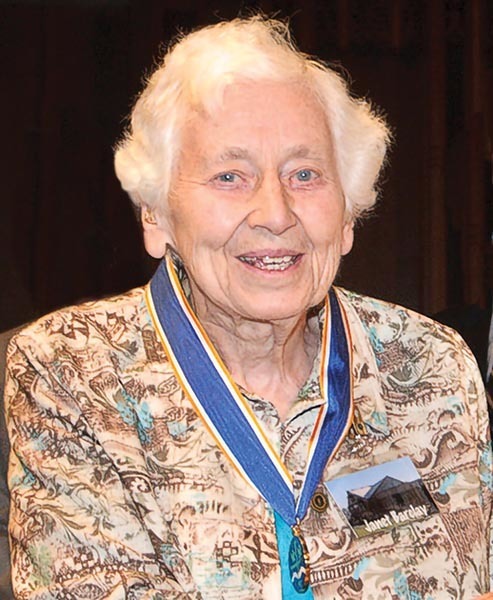 Janet Barclay, ODNW passed into the presence of her Lord, who graciously granted her a long and satisfying life, on Monday Feb 1 at Ridge Meadows Hospital, with family by her side.

Janet was born and raised in New Westminster to Ernest and Emily Lock, both from England and both school teachers. Janet was an enthusiastic Girl Guide and active in her church. She graduated from Duke of Connaught High School and from the University of Toronto with a Masters in Physiology in 1944, focusing on polio research. She returned west to a desperate shortage of teachers and taught Home Economics in Victoria, Creston and Maple Ridge while working on her teacher certification in her spare time.

In Creston she bought a car on the condition the salesman would teach her to drive it. Later she drove it to New Westminster to pick up her driver’s license. Regulations were more flexible back then.

Her move to Maple Ridge in 1950 marked the beginning of 70 years of residency in the community.  In 1952, she married fellow teacher George Barclay, a widower 22 years her senior, with two young sons.  “I have a new mom and she makes lemon pie,” the older boy enthused. Anticipating George’s retirement well before all of the children were out of the home, Janet became well practiced in the art of extracting the maximum benefit and enjoyment for the lowest possible price!

Janet connected with people. She addressed the town council from time to time, drove seniors around when she herself was their senior and befriended and assisted several people with chronic needs. She enjoyed the University Women’s Club and she was an active and faithful member of St. George’s Anglican Church. Janet was invested into the Order of the Diocese of New Westminster in its inaugural year of 2009. Here is her Citation:

At St. George's, Maple Ridge Janet has offered her time & talents in many different ways to the parish including the ACW, the Altar Guild, leading Bible Studies, and caring for the Church Gardens.

She was a model of aging gracefully. She just slowed down. An avid gardener, she made a final tour of her vegetable garden six days before she passed away. Poor eyesight made using Skype and Zoom awkward, but that is how she learned to keep up with the business of her housing Co-op and with her far-flung family.  She survived an altercation with a car in a crosswalk and while she recovered in hospital mused: “Why God wants a half-blind 94-year-old to stick around I will have to find out.”  One thing is certain: for six more years, she continually enriched the lives of those who knew her with her gracious and patient attention.

Janet was able to live independently at her home thanks to many friends and helpers including the members of St. George’s, residents of St. George’s Village, Levern, caregivers from Fraser Health and Dr. Dugdale. The staff of 2West provided expert care and gracious accommodation of her family in her last week.  Heartfelt thanks to all.

A virtual memorial service will be held at 11am Monday February 22, 2021 and may be accessed at stgeorgemapleridge.ca/janetbarclaymemorial.

In lieu of flowers, please consider a donation to St George’s or a charity of your choice.

Many thanks to Janet's family and her parish family of St. George, Maple Ridge for sharing this memorial with the diocese and beyond.

Janet, following her investiture into the Order of the Diocese of New Westminster at Christ Church Cathedral, November 1, 2009 PHOTO: Wayne Chose