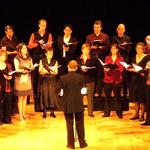 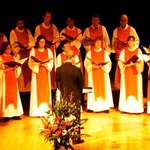 The Christ Church Cathedral Choir under the direction of Cathedral Organist and Director of Music, Rupert Lang enchanted the audience with a Valentine’s Day inspired choral concert on Friday, February 11th in the Sanctuary of Christ Church Cathedral.
The choir performed 17 pieces that included an eclectic mix of traditional Sacred Music, original music composed by Rupert Lang and a few show tunes. The choral offerings were punctuated by selected readings performed by accomplished Vancouver actor, John Innes who is also a Christ Church Cathedral parishioner.
The most romantic aspect of this decidedly romantic evening was that the seed funding for the concert was a gift from Lynda Catchpole and Ray Bates, in honour of their first Wedding Anniversary. That means that all profits from ticket sales can be directed to Cathedral ministries and the Choir tour fund.
A good idea that could very well be adopted for Stewardship Committees and fundraisers around the diocese.
Images: Above -  the CCC Choir in robes with John Innes. Below - The Choir performs in mufti.